Japan is still recovering from the earthquake and tsunami in March, but the people are unbowed and continue to exude warmth and generosity.

THE crowd at the Universal Studio in Osaka was only a quarter of what I had expected. The numbers had not returned to “normal” since the earthquake in Sendai on March 11.

Business was still slow three months after the tsunami.

Not one to thrive on crazy rides, I hesitated at a roller coaster ride but then thought I should experience it now before I was too old to do it anymore. I shut my eyes the moment the coaster moved high up and started plunging downwards and side-ways, speeding up and down mercilessly.

I dared not open my eyes, and just when I could not bear it any longer, the ride ended. Phew! Feeling like a nervous wreck, I shuddered at the thought of another ride. But then after lunch, the Spiderman 3-D adventure beckoned, and we couldn’t resist. Hopping on board, we saw Spiderman swinging and fighting the bad guys high in the air as our jeep escaped the attacks of strange huge creatures and from falling from midair. 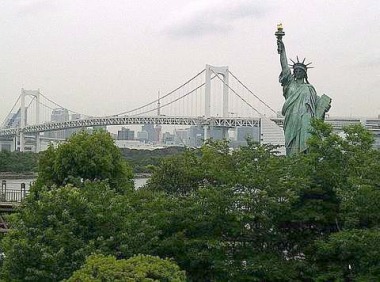 Standing tall: The Statue of Liberty and the Rainbow bridge in Odaiba snapped from the Aqua City Mall.

The ride, filled with special effects including fire and water targeted at us, made us feel like we were in the thick of action.

We had landed in Osaka on June 5 for a tour organised by Apple Vacations & Conventions and immediately commenced our tour of this river city with many bridges before we ended up at Universal Studio. Come dinner, we had fugu (puffer fish) – raw, fried, as well as syabu-syabu style (steamboat) – at the Zuboraya on Dotonburi Road.

I liked the fried version best. Raw puffer fish is chewy and without much flavour. However, the porridge was what surprised me the most. Watching the waitress adding overcooked rice and raw eggs into the steamboat soup with fugu and vegetables in it did not impress me, but I took a scoop anyway. It was surprisingly delicious, and I ended up eating two bowls despite being full.

We took a walk after dinner and came across live puffer fish in an aquarium at the Genpin Fugu restaurant. The restaurant has apparently been around for 30 years and has more than 100 outlets throughout Japan.

Genpin uses Tora fugu (Tiger puffer), reportedly the best puffer fish there is. We were taking pictures of the fish when an employee came out and started speaking to our guides in Japanese. Wary, I stopped taking the pictures but then he scooped out a fish to show us.

“The bigger fish can blow up to as big as a basketball,” said Shinya Nakamura, 30, the restaurant manager.

When I asked for permission to take a picture of him, Nakamura ran into the restaurant and came out with a gift bag containing a few stalks of carnations, a bottle of Japanese sauce and sparkling drink. 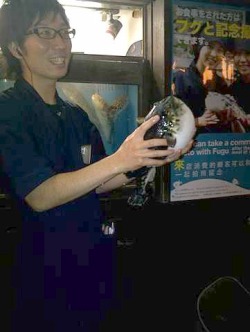 Stunned, I refused but he insisted. His appreciative gesture and business skills floored us. The difficult economic situation had not hampered the Japanese generosity – I saw this throughout my six-day stay here.

We put up the night at Cross Hotel Osaka, a combination of modern furniture and zen-like atmosphere. It served the best breakfast of the trip – extremely fresh and crisp salad, and sausages and bacon that were top-notch.

The following day, we headed for Kyoto, 50km away, stopping first at Kiyomizo Temple, a Unesco Heritage site with a lovely view. Founded in 798 and rebuilt in 1633 by the third Tokugawa shogun, Iemitsu, the temple occupies a high point on Mt Otowa, with its main hall constructed over a cliff.

We then made our way to Gion, an ancient district in Kyoto famed for its traditional hut-like structures and the geisha who we could occasionally glimpse on the street. After that, we hopped on the Shinkansen (bullet train) from Kyoto to Hamamatsu.

The journey took us one hour, instead of three by bus. At the Hamamatsu train station, we stepped into Tonkatsu Wako for dinner. The food served looked like over-fried meat but we were told it was good. Indeed, I was surprised by how the pork cutlet coated with breadcrumbs was so delicious and crispy. It was succulent on the inside, with excellent meat flavour and texture.

At the Okura Act City Hotel in Hamamatsu, rooms department manager, Hideki Matsuura, said we were the first Malaysian tour group he had encountered after the earthquake. He said the hotel had only recovered 10% of their customers since the tragedy.

“All 50 tour groups from Malaysia that were supposed to turn up for the cherry blossom season in May and June cancelled,” he said, adding that Malaysians made up 18% of the tourists at the 45-storey hotel.

As the hotel catered to many local businessmen travelling between Osaka and Tokyo, Matsuura said he had not expected business to be very bad, but he was wrong. 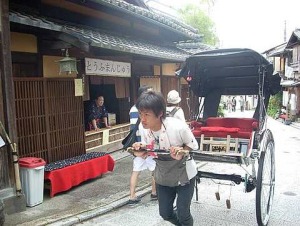 An old trade in Kyoto.

“Now, we don’t know when they are coming back,” he said, explaining that local business travellers now did day-trips instead of staying overnight because business was bad.

At Owakudani, a volcanic valley with active sulphur vents and hot springs in Hakone, Kanagawa Prefecture, we enjoyed the scenic site despite the sewage-like odour. We had eggs boiled in the hot springs. The eggs had turned black and smelled slightly sulphuric.Apparently, eating them increases longevity.

Lake Ashi was our next stop, and it was rather deserted. At the Izu Hakone Railway station, sales and marketing manager Uematsu Kazuo said his area usually received 70% of the annual two million visitors to Mt Fuji, but for a month after the earthquake, no visitors came.

“It was a big loss for us,” he said. Fortunately, locals started to return a month after that and foreigners two months later.

“There’s no point for our government to say Japan is safe. People are not coming back, but foreigners who have come and seen for themselves and told others make a big difference,” said Kazuo, who generously treated us to lunch, refusing payment and even packing gifts for us.

Later in the evening, our bus stopped at the Factory Outlet in Gotemba for us to do a bit of shopping. After that, we made for the Fuji Mihana Hotel, where rooms were designed à la ryokan with futon on a tatami mat.

The highlight of our dinner was the huge Tarabagani crab (Alaska crab), which cost RM800 per crustacean, and assorted sashimi.

After dinner, we ran into a Malaysian tourist at the hotel.

It was the first trip to Japan for Raymond Gan, 47, and his family. Gan said he was impressed with the cleanliness, efficiency and friendliness of the Japanese. He said he did not worry about coming to Japan after the earthquake, but was concerned about food contamination. 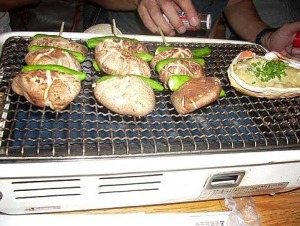 A Japanese-style barbecue with fresh mushrooms and chillies, and crab brain (right).

“There are so many people here and they are not worried about the food, so I thought, why should I worry?” Gan said, adding that he then decided to snap up the deals on offer.

Azman said prior to the tragedy, MAS flights to Japan were at 80% full or more, but after the tsunami, this went down to 20%.

“Currently, it is still low, and that is why we are offering the promotions,” he explained.

At the Fuji Mihana Hotel, owner Setsu Shintou said the number of lodgers from March to June were only 10% the number from the year before. He said 30% of Taiwanese, who made up half of the visitors to the hotel, had started to return, followed by the Thais and Malaysians.

Shintou, a former professional baseball player from Taiwan and a naturalised Japanese, said his two hotels and a restaurant were closed for one-and-a-half months after the quake, with huge losses incurred.

The following day, we headed towards Tokyo. The tour took us to Asakusa Temple and later, a walk around Ginza, where those with deep pockets could shop for premium items and the nicest things money could buy. In the evening, we had a train-ride from Shinjuku to Okubo station where we savoured seafood barbecue at the Fresh Seafood BBQ Restaurant.

Huge clams and crab brain (Kanimiso Kola) were certainly new to me. The crab brain has a creamy cheese texture and was tasty, but a bit too sweet for my liking. My favourites were the tuna, mildly baked in black pepper, butter and garlic, and the simple but tasty grilled mushroom and green chillies.

Restaurant owner Takeda Mitsuhiro said 30% of Taiwanese tourists had returned to his restaurant, and Thais and Malaysians had begun to return, too. He said he lost 20,000 tourists for a whole month after the earthquake.

Mitsuhiro, who is of Vietnamese ancestry, said the Japanese were very thorough when it came to food safety. They would not feed people food that was not safe.

After dinner, I decided to meet up with two Japanese friends.

Yuko Ito said they had so many aftershocks that many people felt dizzy and nauseous.

“A lot of Japanese are avoiding the beaches in Tokyo, Kanagawa, Shizuoka and Chiba this summer for fear of a tsunami,” she said.

Asahi Shimbun staff writer Daisuke Igarashi said the streets in Tokyo were quite deserted after the tragedy.

“There were hardly any foreigners for a whole month after the earthquake,” he recalled.

At Tokyo Disneyland the following day, we could see that the turnout was not great.

Tsutomo Takeuchi, from Tokyo Disneyland’s marketing department, said the March quake was the worst he had experienced.

“We could not even keep standing,” he remembered.

Tokyo Disneyland is hopeful that the summer promotion from mid-July to August would see a return of the crowds.

In the evening, we stopped by Aqua City Mall in Odaiba to capture a picture of the Statue of Liberty replica with the Rainbow Bridge in the background. Business at the mall had clearly not been spared. The prices of clothes prices had been slashed, and so for the first time in five visits, I bought clothes from Tokyo. Fancy that.

On this visit, although some of the sites were already familiar to me, I found the variety of Japanese food to be a pleasant surprise. However, what stood out the most was the warmth and generosity of the Japanese people in the midst a national tragedy. 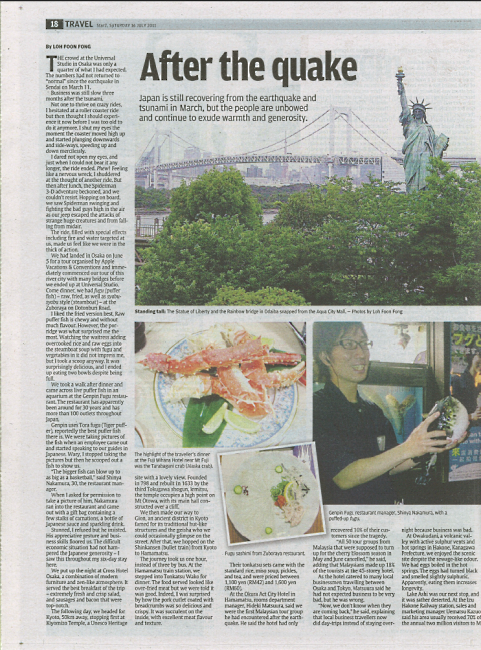 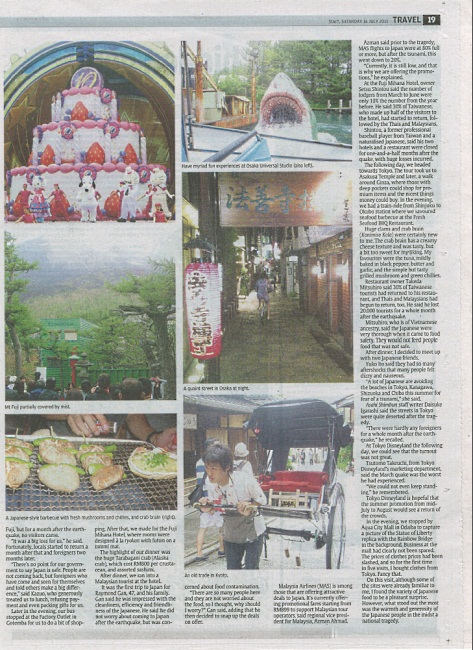