From Dubai to Kyoto: How to see in the New Year in style

首页 / 游人悠事 / From Dubai to Kyoto: How to see in the New Year in style
Facebook
Twitter
Google+

certain destinations around the world offer such spectacular greetings to the new year, that you may want to seriously consider braving the throngs for a front-row seat.

(CNN) — For many people, New Year’s Eve can be disappointing — there’s so much hype in the lead-up to the event that when it actually comes around, it often falls short of the mark.

Madding crowds, endless taxi lines and even longer lines to get to the bathroom — it’s no wonder so many people choose to stay at home with a good movie and a bottle of bubbles.

Howvever, certain destinations around the world offer such spectacular greetings to the new year, that you may want to seriously consider braving the throngs for a front-row seat.

Hong Kong’s harbor dazzles for most of the year, but on December 31 it really glows. This year, for the first time, the city’s midnight fireworks display will journey across town, beginning at the sea and moving along Victoria Harbour to the Hong Kong Convention and Exhibition Centre in Wan Chai.

The best places to view the action? The Hong Kong Cultural Centre Piazza, the promenade from the Avenue of Stars to Hong Kong Cultural Centre, the promenade at Golden Bauhinia Square in Wan Chai and the area near Central Pier. Come back in February to witness the whole spectacle again as the city prepares to ring in the Chinese New Year (February 10).

More than one million people will head to Times Square for New York's legendary fun-filled celebrations on December 31. This year's live entertainment will come from the likes of Taylor Swift, Psy and the Neon Trees.

More than one million people brave sub-zero temperatures to be part of New York’s ball drop celebrations on New Year’s Eve, with live entertainment this year provided by the likes of Taylor Swift, Psy and the Neon Trees.

At the stroke of midnight, a blizzard of colorful confetti is released from the rooftops and party-goers are treated to renditions of Auld Lang Syne and Frank Sinatra’s New York, New York. 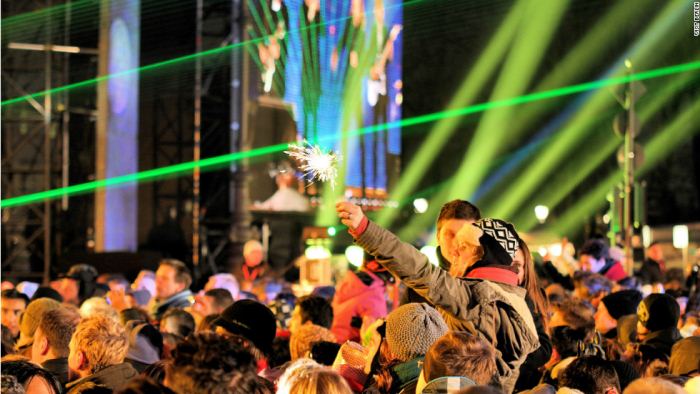 Berliners warm up on New Year’s Eve with the annual Berliner Silvesterlauf: a fancy dress running race that sees participants flipping pancakes along the way. In the evening, party gear replaces gorilla suits as the city descends on the Brandenburg Gate for one of the world’s largest open-air celebrations.

This year, a stage at Pariser Platz will host international and local musicians, while DJs entertain crowds along the city’s “Party Mile”: a two kilometer strip of dancefloors, stages and bars behind the Brandenburg.

As midnight approaches, a laser and light show brightens the sky, with more than 2,000 fireworks and a New York-style ball drop as the clock strikes 12.

It’s been a big year for London, having hosted the Olympic and Paralympic Games as well as the Queen’s Diamond Jubilee celebrations. And the English capital intends to see out 2012 with more pomp and ceremony.

Secure a riverside perch, book a Thames cruise or even better, secure a spot at the London Sky Bar — the views from here are unmatched — and count down to the annual fireworks display launched from the foot of the 135-meter-tall London Eye Ferris wheel.

With 2013 in full swing, hit the streets for the New Year’s Day parade, which will see more than 10,000 musicians, dancers and acrobats take over the town for the 2013 event, themed “Hats Off To London — Celebration Capital of the World.” 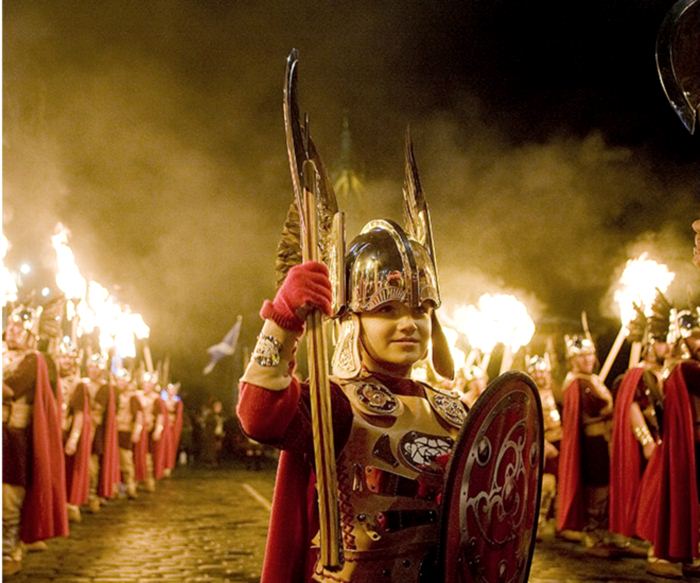 Edinburgh is cast aglow at its annual New Year’s Eve (Hogmanay) festivities, which kick off on December 30 with a torchlight procession involving more than 25,000 locals. The parade is led by Shetland’s Up Helly Aa vikings, with their pipes and drums, and culminates atop Calton Hill with a fireworks display.

There’s more to come on New Year’s Eve, when an expected 80,000 people will take to the streets to sing Auld Lang Syne — apparently the biggest and loudest rendition of the song in the world — and party; this year, entertainment comes courtesy of British bands the Maccabees and the OK Social Club, while Simple Minds will headline at the city’s Concert in the Gardens. 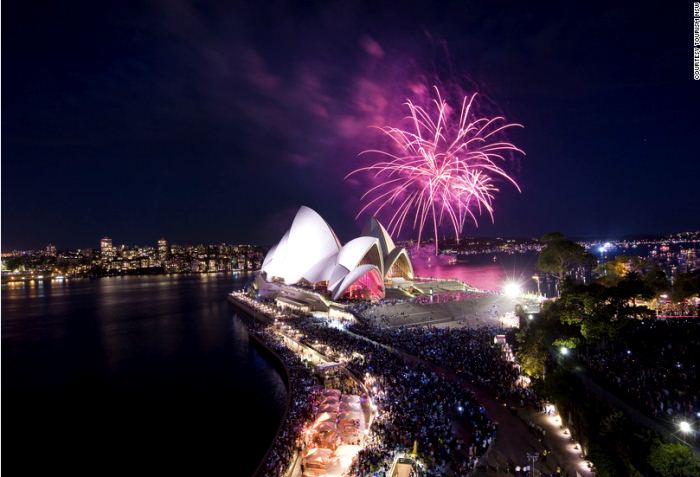 Sydney Harbour is world-renowned for its spectacular New Year's firework.

If there’s a famous Australian who knows how to have a good time, it’s Kylie Minogue. And this year, the pint-sized pop star is the creative ambassador for Sydney’s New Year’s Eve extravaganza. Prepare to party.

The entertainment launches early in the day with a series of aerial acrobatic shows, followed by a traditional indigenous cleansing ceremony: smoke flows across the harbor from Aboriginal and Torres Strait Islander vessels, removing the water of negative spirits.

There’s an early fireworks show for families and a flotilla of boats is transformed with waves of color and light, but the real draw is the midnight fireworks show on Sydney Harbour Bridge. This year’s theme is a guarded secret, although according to organizers it will include “exciting new effects.” 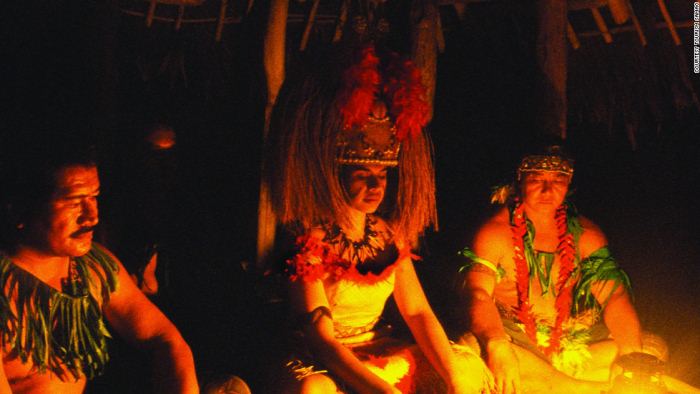 A fire dancer performs on a beach in Samoa.

Samoa went back to the future last year when it skipped a full day, changed sides of the International Date Line and went from being the last country to the first to see in the New Year. If you’re visiting the island nation on December 31 this year you can look forward to events that are less about fireworks and fanfare and more about family.

After visiting elders, Samoans traditionally welcome January 1 with song and prayer services at large, and loud, choral exhibitions. You won’t go hungry — village banquets are very generous — or thirsty for that matter, with all festivities beginning and ending with a kava ceremony. Don’t forget your ukulele. 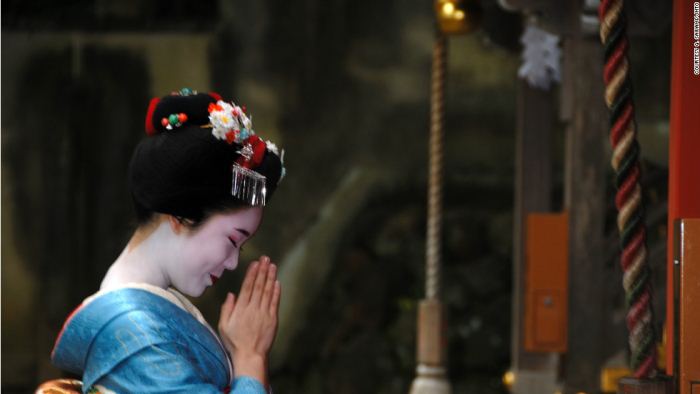 A maiko (apprentice geisha) rings a bell at a temple in Kyoto.

As the clock ticks toward 2013, temples across town ring large bronze bells 108 times, a Buddhist tradition said to rid humans of earthly desires.

The Yasaka Shrine and Chion-in Temple are particularly busy on December 31 — the latter features a bell that weighs more than 70 tons and takes a team of 17 monks to strike it, crying out “Ee hitotsu” (One more!) and “Sōre” (Now!) each time they make contact. 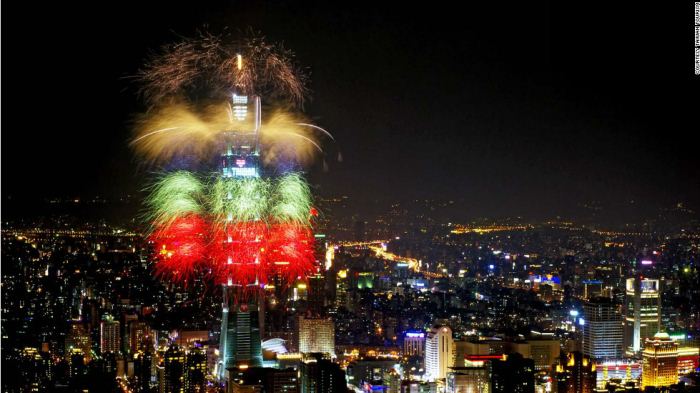 The Taipei 101 tower is lit up by fireworks.

The Taiwanese capital thinks big when it comes to New Year’s Eve, transforming the 509-meter-high Taipei 101 tower into a fireworks frenzy with a 188-second show themed, “Amazing Moment, Amazing Taipei.”

Six of the country’s favorite performers, one for each hour of the official countdown, will entertain crowds at ground level.

If you can’t secure a spot at Rainbow Riverside Park or Elephant Mountain, head to Miramar Entertainment Park, where an equally dazzling display will fill the night sky. After the big bangs subside, locals make their way to nearby hot-spring resorts for a romantic soak — the perfect start to 2013. 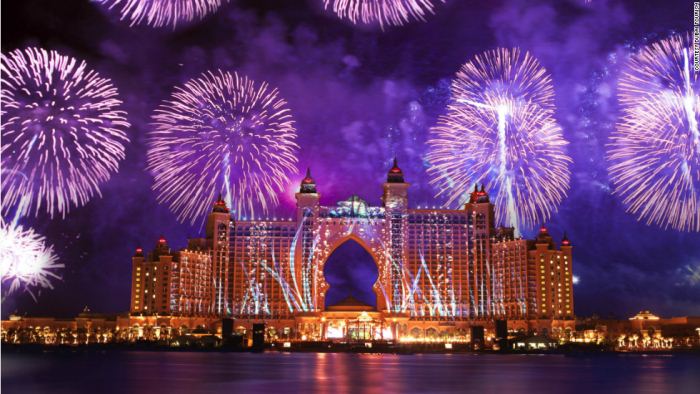 The Atlantis, The Palm resort in Dubai.

Never shy of making a grandiose statement, Dubai sees in the New Year with a bang — literally. The world’s tallest building, the Burj Khalifa, is the launching pad for a multi million-dollar pyrotechnics display (also claiming to be the largest of its kind in the world), which sees choreographed fireworks cascading down the 828-meter-tall skyscraper to the tune of Arabic and world music notes.

The fun continues on the beach at the Atlantis, The Palm resort where the annual Sandance festival sees headlining acts Ellie Goulding, Rita Ora, Roger Sanchez and Paul Van Dyk entertain revelers into the early hours of 2013, backdropped by more fireworks, of course.