15 of the world’s weirdest museums

Not every museum is a shimmering beacon of high culture. Some focus on the more exotic aspects of the world.
No matter how bizarre, offbeat or outrageous the subject may be, there’s probably a museum dedicated to it.

Tap water, dog collars or the underpants of your favorite celebrities — here, the niche takes the spotlight.
Not every museum is a shimmering beacon of high culture. Some focus on the more exotic aspects of the world.
No matter how bizarre, offbeat or outrageous the subject may be, there’s probably a museum dedicated to it. 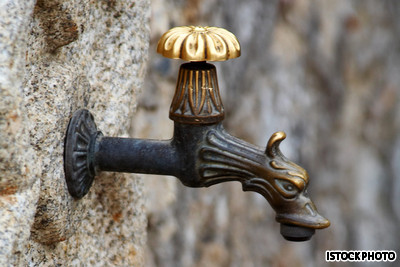 The exciting side of tap water.

The exciting side of tap water.

This former pipe-house in the center of Beijing has been converted into a museum dedicated to the ins and outs of tap water, including 130 “real objects,” models and artifacts such as vintage water coupons dating to the first tap water company in the capital, the Jingshi Tap Water Company.

But don’t be tempted to quench your thirst after all this tap water reading; Beijing residents have long known that the water coming out of their taps is hardly safe to drink.

Don’t miss: The miniature tap water filtration system that gives the Forbidden City a run for its money 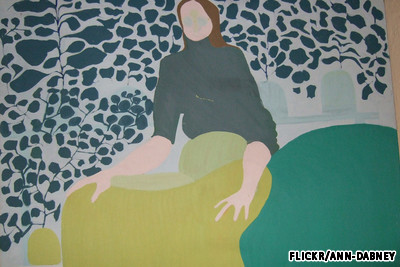 Think you could do better?

Most of the displays here wouldn’t make it to your mother’s fridge, let alone the Louvre.

But here more than 600 pieces, which in other places might inspire polite nods and insincere compliments, have a place to shine.

Located “conveniently beside the toilets” in an old basement in Dedham, Massachusetts, the museum accepts only art too bad to ignore.

Row after row of misshapen flowers and brightly colored portraits reaffirm that, yes, your five-year-old could probably do that.

Don’t miss: “Lucy in the field with flowers,” a true icon depicting a seemingly floating septuagenarian amongst a slowly swaying field of blossoms. 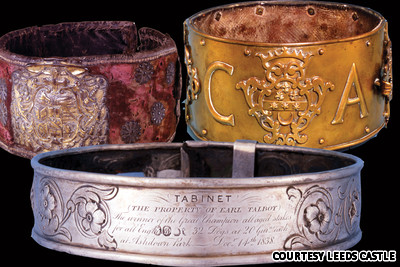 Medieval puppies would be rolling in their graves if they witnessed the stylish vests doggies are donning today.

Nearly half a million pet lovers rejoice every year in this one-of-a-kind display of dog paraphernalia, surprisingly the only one of its kind found in Great Britain.

Dogs have always been a presence at the manor at Leeds Castle gracing the side of Lady Baillie, the last owner of the estate, whose love of dogs inspired the creation of the museum.

The display of puppy attire with more than 100 unique items dates back centuries, documenting the history of canine accessories from medieval times.

Don’t miss: Antique collars from the 15th and 16th centuries, sporting a strip of spikes around the neck to protect against attacking beasts. Round up the neighborhood fathers, it's time for a field trip!

What some might consider an icon of the worst aspect of suburbia is cherished at the British Lawnmower Museum, which details the history of the push-powered garden tool.

Want to see the first solar-powered robot grass-chopper, or the original mower itself, transformed from a contraption used to hem guards’ uniforms? This museum is for you.

From royal lawnmowers belonging to Prince Charles and Princess Diana, to the world’s most expensive lawnmowers, this place allows everyone to at least talk up appearances even if you can’t keep them.

Don’t Miss: A fully functional lawnmower less than five centimeters high, ready to shave the errant blade of grass off even the tiniest lawn. 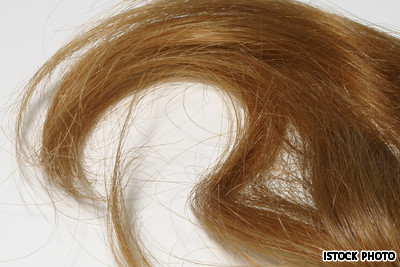 Explore the world’s largest collection of hair gathered from more than 16,000 women.

Avanos, a tiny town in central Turkey, has been famous since antiquity for its remarkable earthenware pottery. In recent years, however, the town has gained fame for a more unusual sight: the caves of the bizarre Hair Museum, created by potter Chez Galip.

The walls under his studio are covered with the world’s largest collection of hair sourced from more than 16,000 women, along with their names and addresses. Locks of every length and color transform everything but the floor in a kind of hairy haven. 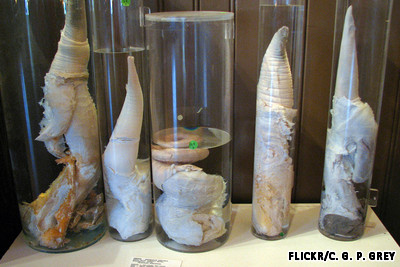 Get your mind out of the gutter. This museum is the premier institution to learn about the male sex organ, described on its website as “probably the only museum in the world to contain a collection of phallic specimens.”

There’s no pornography, but you can admire 276 penises, from the tiniest hamster member (two millimeters) to the colossal private parts of a sperm whale (1.7 meters). The museum received its first human exhibit from a 95-year-old Icelandic man earlier this year.

Don’t Miss: Lampshades made out of bull testicles, a tree trunk carved to look like a phallus and an “unusually big” penis bone from a specially endowed Canadian walrus.

This museum will get a rise out of you.

While the Museum of Bread Culture may not be as popular as its sliced namesake, it’s certainly an interesting examination of the ends of every sandwich.

More than 18,000 exhibits depict everything from the 6,000-year history of bread in works of art (artists include luminaries Salvador Dali, Many Ray and Pablo Picasso) to ancient artifacts of bakeries dating from the Stone Age.

Make sure to pack a lunch, though: despite being devoted to the food of life, you won’t find one edible loaf within the museum. 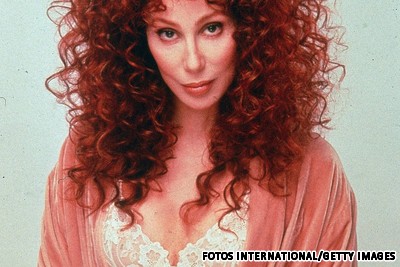 Cher’s bra is among the famous delicates on display.

Frederick’s of Hollywood, the store that brought unmentionables such as push-up bras and thong panties to the world, has in its hot-pink art deco flagship display a snapshot of Tinseltown literally under wraps.

While the ground floor is devoted to retail, upstairs is a who’s who of Hollywood undergarments, from Tom Hanks’ boxer shorts in “Forrest Gump” to the undies of the entire cast of “Beverly Hills 90210.”

There’s even women’s undies worn by men in drag, such as the dress worn by Milton Berle on his television show, and the training bra used by Phyllis Diller (marked “this side up”).

Don’t Miss: The museum was one of the many establishments looted during the 1992 riots in Los Angeles, losing its cherished purple and gold brassiere formerly belonging to Madonna; however she provided a replacement after Frederick’s donated US$10,000 to charity. 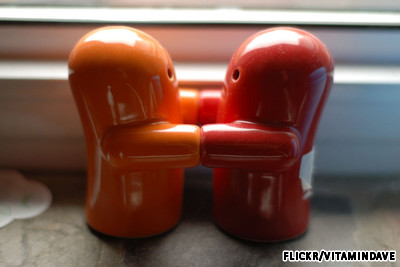 You'll see match made in heaven salt and pepper shakers like these at the museum.

You can even pick up your own pair at the gift shop, where many duplicates are for sale, allowing you to start your own collection.

Don’t Miss: You’ll pretty much find whatever figurine you can imagine here between the Amish farmers, sleepy Mexican rancheros and human feet. 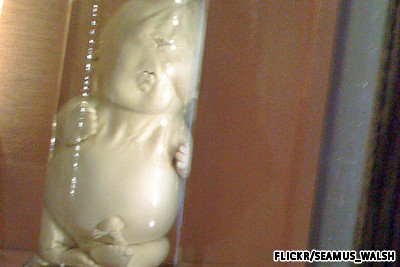 Pickled fetus at the Kunstkamera.

Russia’s first museum might seem an odd selection for a “weird museum,” but even a casual glance at Peter the Great’s cabinet of curiosities reveals some bizarre items.

The massive collection of more than 200,000 natural and human oddities was originally assembled to dispel the Russian people’s belief in monsters, though it’s difficult to see how the strange exhibits might have accomplished that.

The czar put together a ghastly personal collection of curiosities including deformed fetuses, creatures with extra heads or limbs, even a decapitated human head preserved in vinegar. The building is now home to the modern Museum of Anthropology and Ethnography, with many remnants of Czar Peter’s collection of medical freaks hidden behind mannequins of local tribes and rather uninteresting presentations.

Don’t miss: Hundreds of preserved human fetuses, every one of them with an odd anatomical mutation from flippers to deformed heads. 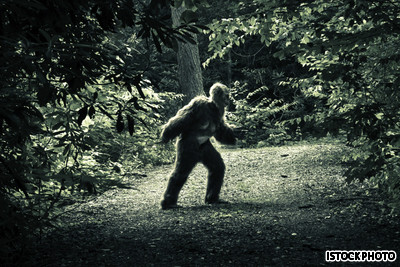 Cryptozoology is the study of unverified animals, mystical creatures only rumored to exist by legend or belief, such as the Yeti or Loch Ness Monster.

For Loren Coleman, who has become one of the world’s leading experts on creatures that may not exist, “belief” is purely within the realm of religion.

Coleman has created a museum amassing a collection of purported specimens, relics and artifacts dealing with mythical creatures, including a life-size coelacanth and P.T. Barnum’s Feejee Mermaid, as well as a wealth of hair samples, fecal matter and footcasts of animals that probably have never walked the face of the earth.

Don’t Miss: A 2.5-meter, 130-kilo “Crookston Bigfoot,” probably your only chance to see the legendary creature with your own eyes.

The meal of choice for bachelors and broke college students the world over now has a home of its own.

This museum honors the creator of the instant ramen noodle, Momofuku Ando — featured in statue form on a colossal stone cup of his instant meal — who struggled to create an inexpensive food for the impoverished survivors of World War II.

The museum itself is hardly dry and flavorless, with a kitchen where visitors can make their own instant chicken substitute meal in a bowl, a gourmet snack for people who can’t really cook for themselves. Hot water is provided.

Don’t Miss: The entire catalog of every Nissin instant noodle product. Ever. If you’ve been unemployed for some period of time, you’ll feel right at home.

Take your kids here and you'll never have to plan another Halloween.

It shouldn’t be taken lightly when a museum is colloquially known as the museum of death, and indeed, this museum is not for the weak of spirit. Or stomach.

On entry to the museum you’re welcomed by the warm rictis grin of the museum founder’s skeleton, a rather foreboding sign of the things to come.

It’s no slasher flick, but it feels like one: hemorrhaged brains, severed and mutilated legs and arms, lungs cut up by deep knife wounds and skulls punctured by bullets demonstrating how bullets ricochet around inside your head.

Pretty much the most gruesome ways to pass on to the next life are on display like a local art museum, and it proves a hit: the morbid exhibition of a hospital is reportedly the most popular attraction in the capital.

Don’t Miss: The mummified body of Si Ouey, a notorious cannibal who murdered several children during the 1950s. 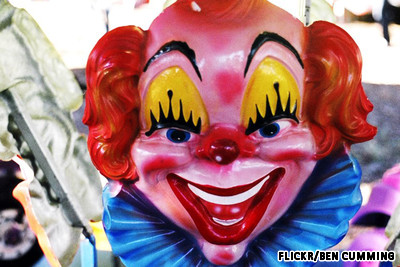 We can't tell what's creepier, the smile or the precise makeup?

Look out for the hand buzzer and seltzer bottle, but this clown museum is more than a barrel of laughs.

The clowns who joked (and sometimes terrified) America are honored inside, with every one of the fascinating stories behind the inch-thick layer of makeup featured in the world’s largest archive of clown artifacts.

Don’t Miss: The scrapbooks of legendary circus clowns, allowing you to finally discover what exactly it is that makes a clown cry. 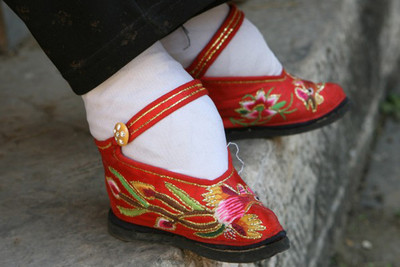 Our advice on beauty? Just brush your hair and smile.

Good hair day? On the third floor of the People’s Museum in Malaysia is a monument to the extremes people will go to feel pretty, oh so pretty.

The records go back to the very beginnings of human history, revealing some of the outrageous concepts of beauty people will conform to: bound feet, insertion of round disks into their mouths, molding heads into oval shapes and much more.

Bring your own mirror; you’ll feel a lot better about your own appearance after leaving this gallery of “real beauty.”

Don’t Miss: A display of how several tribes elongate the neck with brass rings or stretch ear lobes with plates. Take an aspirin after your look.