Christmas in Japan is more of a celebration of love rather than a religious festival. But at Universal Studios Japan, it’s a blend of these two elements. THE cold late morning doesn’t look promising but as soon as my eyes settle on the bright red and pink creatures grinning from ear to ear, I feel a warmth in my chest.

But what really attracts me to this wonderland in Osaka are the Christmas songs blasting non-stop from the speakers.

I can’t help but sing along to classics like Silent Night, Santa Claus Is Coming To Town and Joy To The World. Christmas is in the air!
As I take in the wondrous festive feeling, I realise that the music complements the sight before my eyes.

Wreaths of all sizes dotted with red flowers and gold bells hang on doors and windows of the Western-style shops, transforming the main street into a little Christmas town.

Everywhere I look, I see large bows tied to lamp posts and wreaths on tall coconut tree trunks in the Hollywood area.

Even the statue of menacing Jaws gets a huge wreath with a red bow of its own. Not so tough now, eh?

I see a Christmas tree in the distance and make a mental note to check it out later. But what do you know, there are Christmas trees in every corner — indoors and outdoors. They are all adorned with shiny and colourful orbs, gold bows and silver snowflakes.

But what is a Christmas town without a Santa? While I have yet to bump into a real Santa, the ever-friendly employees are dressed in line with the theme. Each wears Santa hat and, of course, a warm smile. It amazes me how they manage to be so cheerful all day long.

It rarely snows in Osaka, but if does, it will make the whole Universal Wonder Christmas even more perfect. 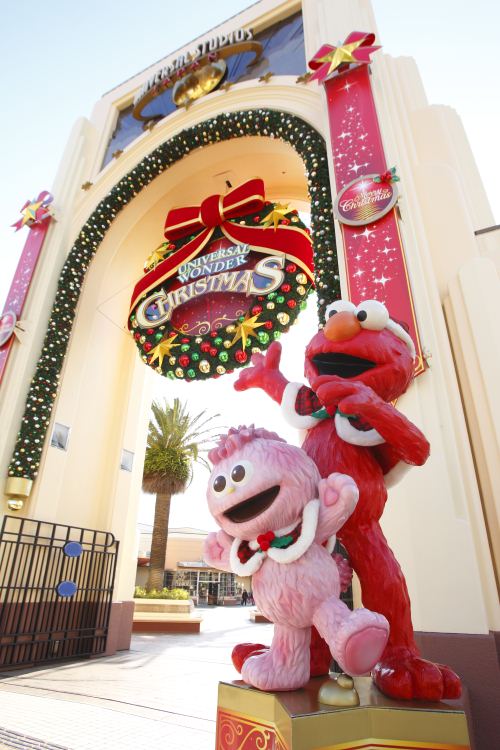 Moppy and Elmo guarding the entrance. 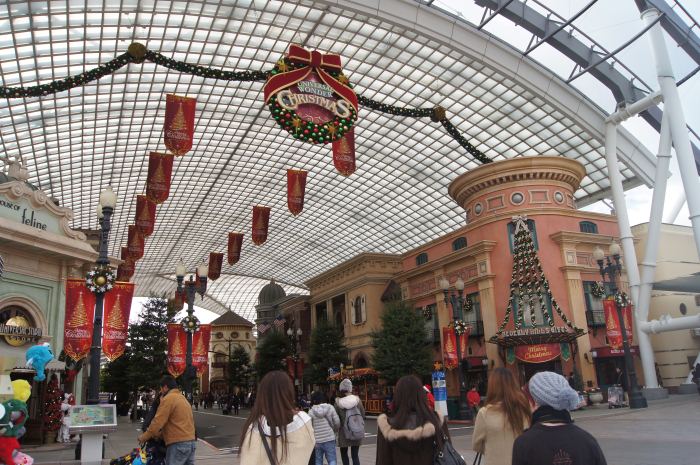 My jaw drops as Akiyo, our bubbly and kawaii guide, leads us to the Ultimate Christmas Tree. Yes, that’s what it’s called and it certainly lives up to its name.

Towering at 36m (about the height of a 12-storey building!) it is the tallest Christmas tree in Japan. I didn’t know it was this big when I saw it earlier.

Approaching it slowly as if it is a giant robot about to come to life, I gasp at its beauty and sheer size. The green surface of the tree is actually made up of 260,000 tiny LED lightbulbs which create the illusion of fir or pine leaves. This number had earned it a Guinness World Record last year.

The tree has gold drape trimming that elegantly circles it from top to bottom, while colourful balls of different sizes and colours deck the uncovered space left by the gold drape.

At the top of the tree is a gold star and my first thought is how someone could have put that on the giant tree. Then, I wonder how they even constructed a tree this big!

When the sun goes down, the tree is lighted and I gasp again at the breathtaking sight. The bright colours of the LED lights make a beautiful contrast against the dark backdrop of the night sky, making the tree stand out even more.

The lights smoothly change colours, alternating from bright to soft, and back to bright. Looking at it from afar, I feel like I am watching a cartoon. Surely such beauty can’t possibly come from technology. 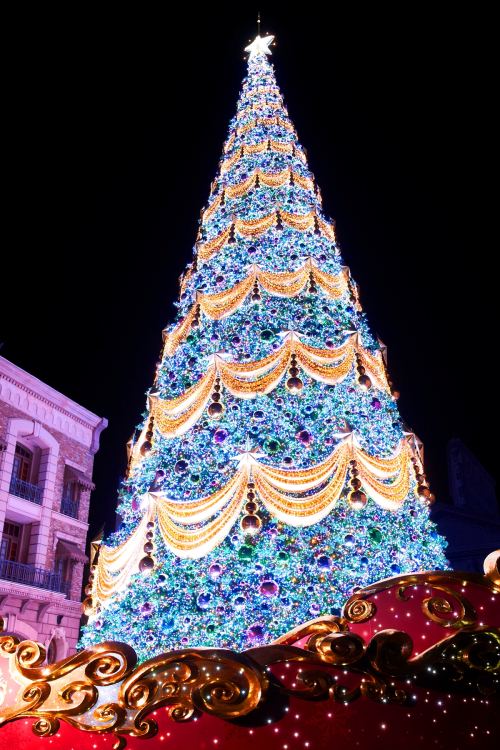 The Ultimate Christmas Tree seems like it is almost piercing the sky.

Akiyo is quick to draw our attention from the Hello Kitty gift store to the two toy soldiers marching in the Hollywood Area street.

The soldiers, with their faces painted white and red smiling lips, are dressed in red army suits with pants and tall hats. They move in a steady rhythm, so visitors with cameras, including yours truly, hurriedly crowd around to get a picture.

When I realise that they are marching very closely in my direction, I step out of the way, just to find them making a turn. Apparently they move when they sense obstacles in front of them.

That’s when they begin to be more versatile in their step. Not only do they march in different directions but they display robotic acts — just like toy soldiers — that surprise their unexpected audience.

Akiyo says these Santa Toy Soldiers perform along the street for about 30 minutes, five times a day.

Still in the Hollywood area, another street performance takes place in the afternoon. This time, it’s a parade of several colourful floats in the shape of a toy train.

The Happy Snow Party floats carry some of my favourite characters including Snoopy, Hello Kitty, Woody Woodpecker and the Pink Panther. Together with cute snowmen and other dancers, they dance along to Christmas tunes as they entertain the crowd.

Just as I am wondering why it is called a snow party, I see “snow” falling at the end of the show. Soft white foam is emitted from sprinklers to create the illusion of a snowfall. It is a beautiful picture.

Christmas trees, snow and now, I see Santa Claus sitting in a large armchair at the Universal Wonderland area, with large boxes of presents around.

Although he’s a bit too thin to be Santa, at least he has the obligatory white and fluffy beard, and moustache which almost covers his face, a round tummy and a red Santa suit.

He doesn’t really interact with the public though and with so much facial hair, who knows if he is smiling or not? 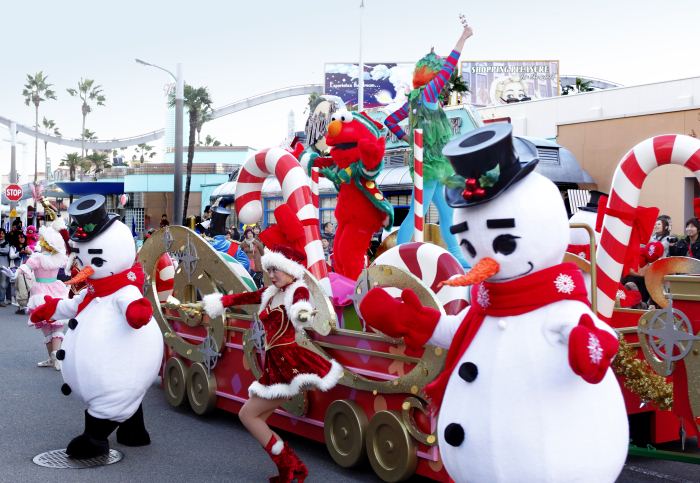 Let your favourite characters including Elmo regale you with Christmas songs at the Happy Snow Party parade. 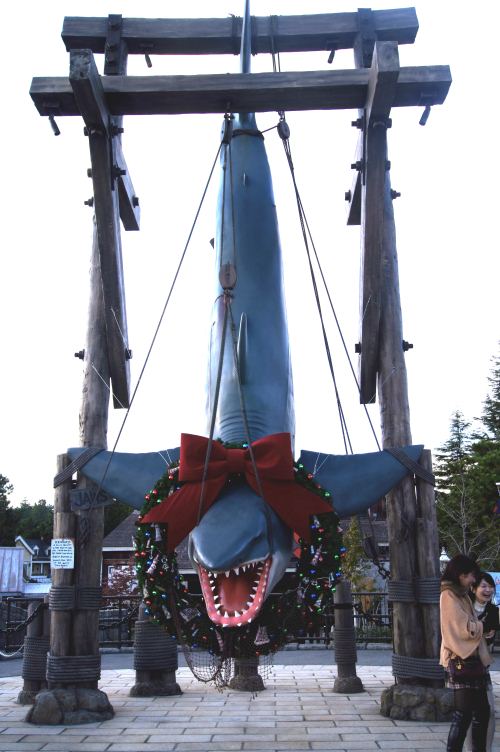 Even Jaws has his own giant Christmas wreath.

Christmas is everywhere — including in the 20-plus restaurants and cafes. Not only do the deco and employees follow the Christmas theme but the food too has been designed to suit the Yuletide season.

Irish pub-themed restaurant Finegan’s Bar & Grill offers live entertainment and serves a set of seafood pie, salad and bun. Nothing special or unusual about that, except that the pie is in the shape of a Christmas tree!

The Beverly Hills Boulangerie cafe is bolder and its Christmas-inspired menu has cookies with adorable pictures of Elmo and Snoopy iced on them.

In addition to muffins, shortcakes and puddings, it also sells a light meal set of a drink, salad and dessert with a main course of pizza… in the shape of a Christmas tree. Cute!

My excitement escalates each time I enter the gift shops at the Studio. Well, I do have a tendency to over-shop.

I literally squeal when I see Snoopy and Elmo plush toys with Santa hats. So cute! There are also Christmas-inspired keychains, snow globes and lightsticks. 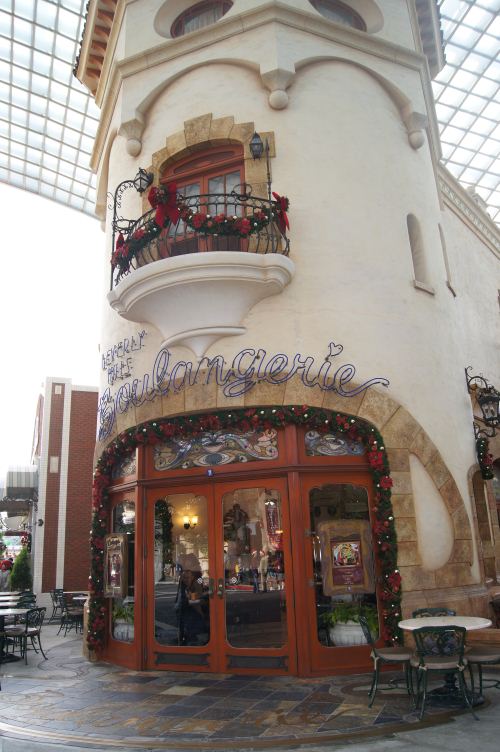 Most of the shops, including Beverly Hills Boulangerie, are decorated with Xmas ornaments. 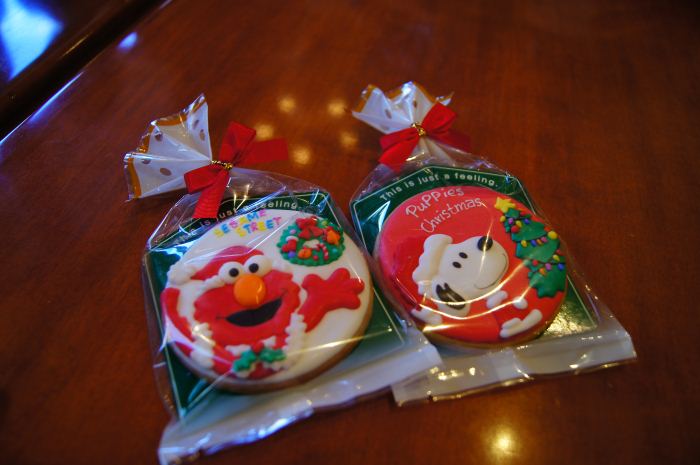 It is already dark at 5pm. Akiyo says it’s time for the highlight of the day: The Gift Of Angeles II: The Song Of An Angel, a highly acclaimed and spectacular staging of drama and music.

She brings us to the New York area where a stage with two giant walls as the backdrop is located near the Ultimate Christmas Tree.
With high-resolution images, 31 projectors turns the bare walls into a backdrop of Manhattan skyscrapers and New York City street during Christmas.

The musical centres on the love between the main characters Andrew and Melissa, who speak in Japanese. I can’t understand it but Akiyo informs me later that it is a continuation of Universal Studios Japan’s 2010 Christmas musical,

The Gift Of Angeles.

In the prequel, Andrew and Melissa met in Paris and gave each other the same Christmas present, a candle in the shape of an angel.

Their friendship turns to love and in the sequel, Andrew proposes to Melissa on Christmas Eve. The story takes an emotional turn as they vow to cherish each other eternally. Their parents are sad about parting with their children, but with angels’ blessings on the couple, everyone is happy.

Close to the end of the 20-minute show, an angel descends from the top of the stage to bestow blessings on the couple. This scene is pivotal, and is followed by a celebration of pyrotechnics and music as Andrew and Melissa tie the knot.

Although I can’t understand a word, my eyes are glued to the stage and slowly I get the meaning of the story.

I feel my heart twist as Melissa and Andrew display their feelings for each other through their awesome singing. I can hear their emotions in their vocals, and I try hard not to shed a tear… or two.

The projection of images is amazing, too! There is clarity in the pictures, and I can see a church’s stained glass windows, the various colours and textures of New York buildings and even the falling snow. 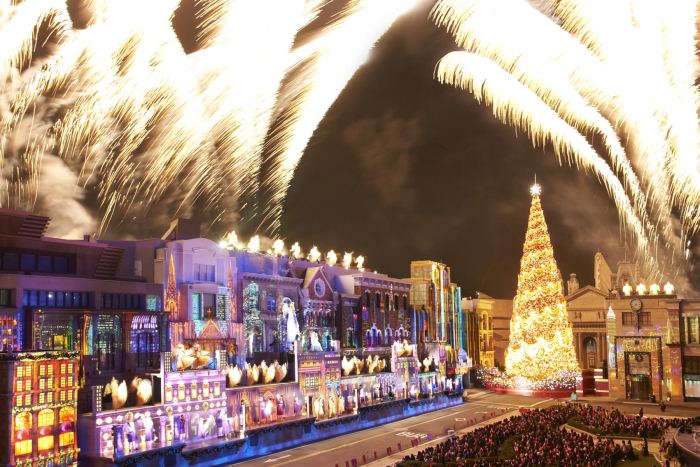 The Gift Of Angeles.

All’s well that ends well. The day comes to an end but true to the Studios’ style, it doesn’t do so without a bang.

The Magical Starlight Parade, a regular event at the Studios, is a one-of-a-kind parade with lighted floats in the shape of various characters.

I can’t help but go “ooh” and “ahh” when I see familiar cartoon characters like Elmo, Snoopy and Hello Kitty as well as Disney characters like those from Alice In Wonderland, Aladdin and Cinderella.

The dark alley is bursting with moving colourful lights from the floats’ LED lights and dancers whose costumes are also illuminated with bright lights.

As the parade slowly disappears at the end of the street, I remember what my Japanese friend told me about Christmas in Japan.

“Christmas in Japan is more of a celebration of love rather than a religious festival,” he said. But at Universal Studios Japan, it’s a blend of these two elements.

The real meaning of Christmas is not lost among its devotees in Japan. The same applies to love.

Universal Studios Japan, the first of two Studios parks in Asia, is located in Osaka. The Universal Wonder Christmas is on until Jan 7. Details at www.usj.co.jp/e. 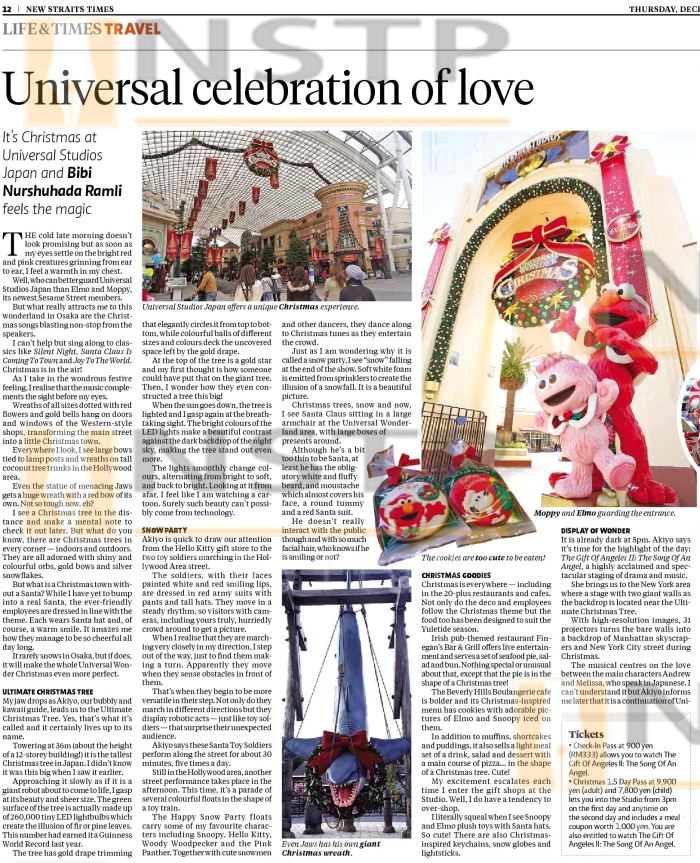 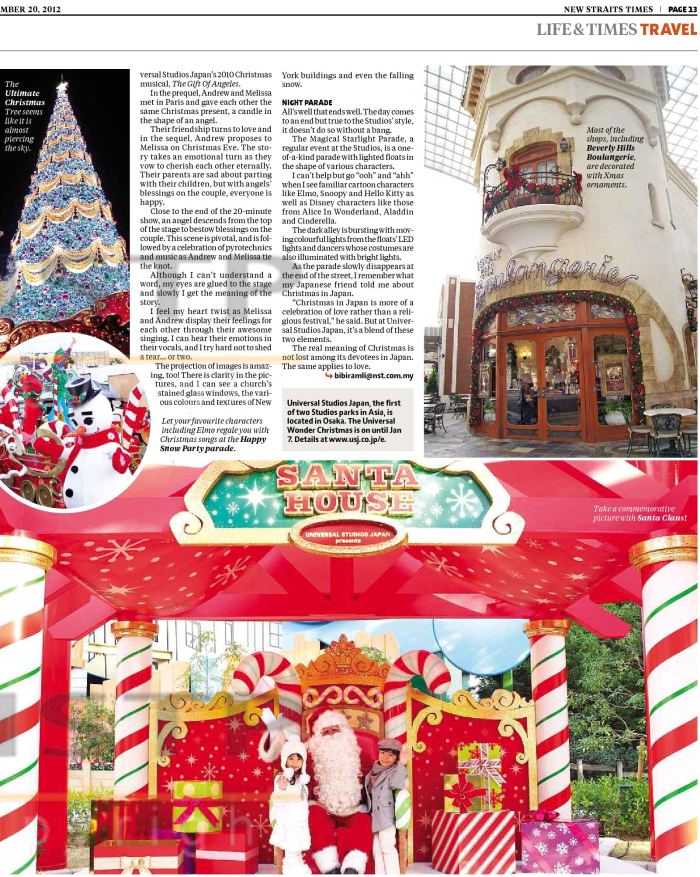