Go Crazy during the Day, Let out Screams at Night!!Universal Surprise Halloween Takes Place on the Greatest Scale Ever! 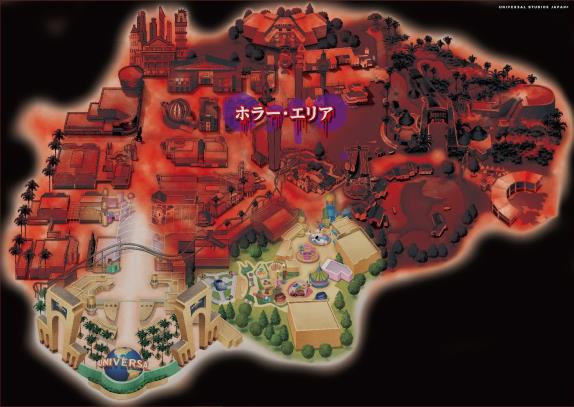 Go Crazy during the Day, Let out Screams at Night!!
A Succession of Excitement Releases Pent-Up Emotion and Let out the Real You
Universal Surprise Halloween Takes Place on the Greatest Scale Ever!
Friday, September 13 to Sunday, November 10, 2013 only!

Universal Studios Japan will hold its annual autumn event Universal Surprise Halloween for a limited period only59 days from Friday, September 13, 2013. A Halloween event at which guests can enjoy two kinds of ultimate excitement–“enthusiasm” and “screams” –all day long will be offered on the greatest scale ever. 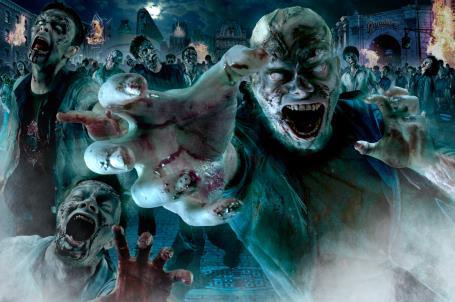 Approximately 90% of the Park will be occupied by a 1-km long chain of zombies, three times as many as last year!

Entire Park excluding the area under the Canopy at Hollywood Area and Universal Wonderland will be totally transformed into a park of horror where the greatest number of zombies ever will hang around during the Universal Surprise Halloween period from 6pm on Fridays, Saturdays, Sundays, and Mondays, as well as Thursday, October 31. Approximately 90% of the Park will be occupied by a 1-km long chain of zombies, three times as many as last year! In some areas guests will see battles between zombies and soldiers, and in other areas they will be suddenly attacked by zombies. Different kinds of terrors that happen one after another around the Park will raise guests’ screams to the highest level. You can’t play it cool at the most scary horror park in the history of Halloween event at Universal Studios Japan.

This year, greater terror will be added to the event! Popular Park attractions and a restaurant will be cursed by Sadako, the main character of the Japanese blockbuster horror movie series that was remade into a Hollywood movie and gave the shivers to many more movie fans. Her curse will cause guests to experience horrible terror and panic. Besides this, two attractions that made their debut last year and terrified many guests will return to the Park, and have been upgraded into Jason’s Blood Diner 2 and The Mummy Museum III. This year’s Halloween Horror Night with a new spine-chilling program will cause a chain reaction of screaming from noon.

The event takes place from 6:00 p.m. to the Park closing time on Fridays, Saturdays, Sundays, and Mondays, from Friday, September 13 to Sunday, November 10, as well as on Thursday, October 31. 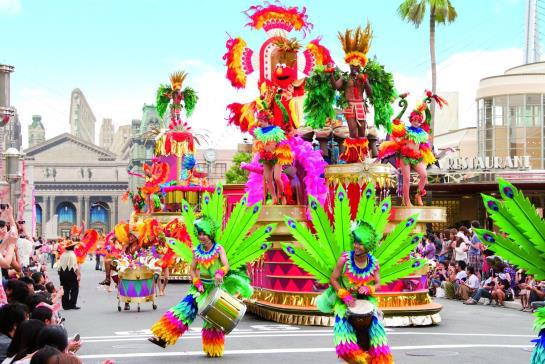 Parade de Carnivale
Carnivale, an autumn event held in the Park, is a parade based on enthusiastic world-famous festivals.

In this very popular annual parade entertainers will give away colorful bead necklaces, throwing them at the guests watching from the roadside, which is a tradition at Mardi Gras (U.S.). This year, the total number of necklaces given away each day will triple from last year–as many as 1.4 million pieces! (during the period of the Parade). The excitement of guests who try to catch them with outstretched arms will be even higher than ever, causing the greatest enthusiasm in the history of the Park’s Halloween events. Over 100 dazzlingly costumed entertainers, live performances of Latin music with its distinctive rhythm and beat, and 12 colorful and flamboyant floats (mobile stages) will stir guests up into a frenzy.

Amusement for Halloween period only! Wear a unique costume to fully enjoy the new event Scout de Carnivale!
Scout de Carnivale, an entertainment by which guests can enjoy the right to participate in Parade de Carnivale, will be newly performed at Gramercy Park in New York Area. Let’s wear Halloween costumes to enjoy a feeling of freedom and excitement to the fullest! Put on an extremely unique costume to try to be scouted by our staff as a participant in the parade, or wear slightly different attire from your ordinary clothes to make merry with the characters and entertainers– you can let out the real you to enjoy the Parade more enthusiastically. Scout de Carnivale is sponsored by Art Corporation.

Universal Wonderland is a very popular family area where children and adults can have fun all day long throughout the year. Every corner of this area, which is home to various attractions such as The Flying Snoopy and Hello Kitty’s Cupcake Dream, will be decorated with extremely adorable Halloween-themed ornaments featuring jack-o’-lanterns, bats, candies and other items. In this colorful and cute character world during the Halloween season, Wonder Trick or Treat*, in which guests can see characters wearing special Halloween costumes, will be performed for a limited period only! There are seven doors to allow children to meet the characters. When they cheerfully call “Trick or Treat!” in front of one of these doors, characters wearing very cute Halloween costumes will give them candies. Each child puts his or her hand into a basket to grab as many candies as possible! Everywhere in this event area you will see the smiles of children filled with happiness because they can meet characters in different costumes than usual and have fun grabbing candies. This is the most highly recommended entertainment for this autumn.

* Wonder Trick or Treat is an event for elementary school children or under. Of the seven doors, only Hello Kitty’s Ribbon Collection does not have an age restriction. 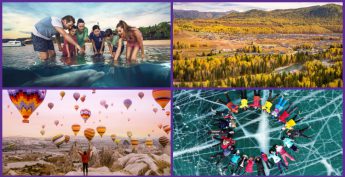