The Mingalaba Connection Bangkok : The Springboard for Regional Travels

To most Malaysians, Bangkok is no stranger to us. I’m sure many of us have been to this famous capital city of Thailand. We have been there for many reasons.

To most Malaysians, Bangkok is no stranger to us. I’m sure many of us have been to this famous capital city of Thailand. We have been there for many reasons.

To most Malaysians, Bangkok is no stranger to us. I’m sure many of us have been to this famous capital city of Thailand. We have been there for many reasons. Firstly, it has to be for the irresistible draw of shopping opportunities. Next, the delicious taste and varieties of food and fruits make up the top satisfaction elements. While the hedonists find their pleasures in the spa and reflexology treatments, those who love temples and everything heritage will find their mission fulfilled. 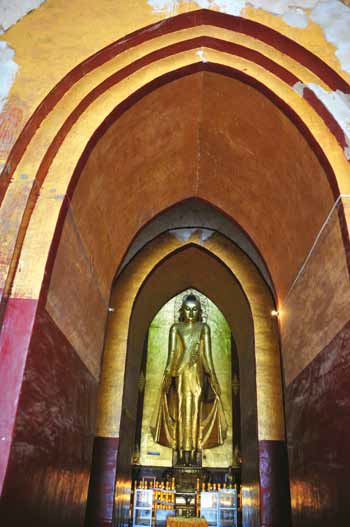 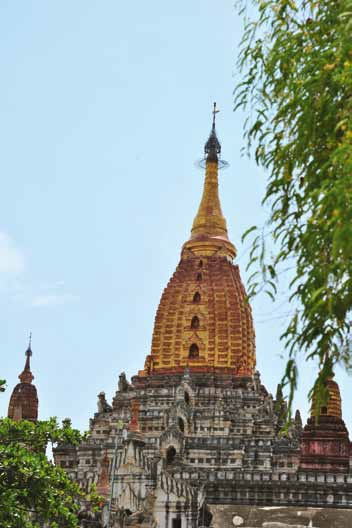 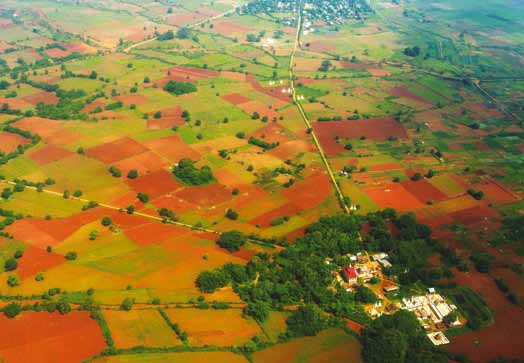 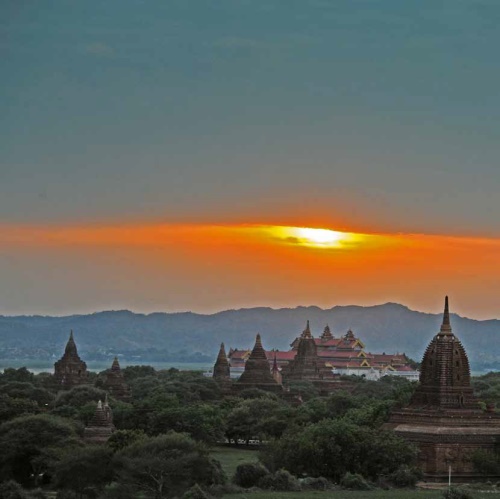 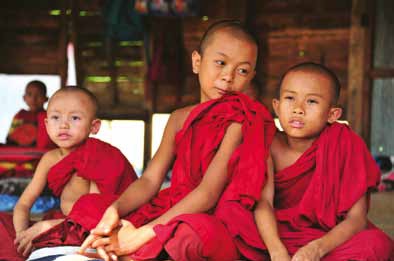 Monks of the Kyaikhawine monastery lined up to receive alms from devotees. 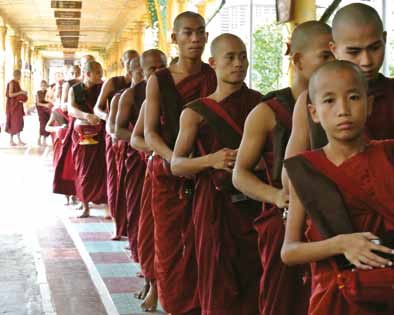 Monks of the Kyaikhawine monastery lined up to receive alms from devotees. (2)

With an advanced new airport and rapid development of the flight industry, Bangkok is playing a bigger role now. Being connected to many cities of the world and most cities in Southeast Asia, Bangkok assumes the role of the springboard for regional travels. Kuala Lumpur and Yangon are amongst the many cities served by Bangkok Airways. Bangkok Airways operates daily flights to Yangon. Making use of the tour package offered by Bangkok Travel Club (a subsidiary of Bangkok Airways) and Mingalaba – with
this greeting in Burmese language, we set off to the best of both worlds – savouring the mystical charms of Myanmar and the excitement of shopping in Bangkok. 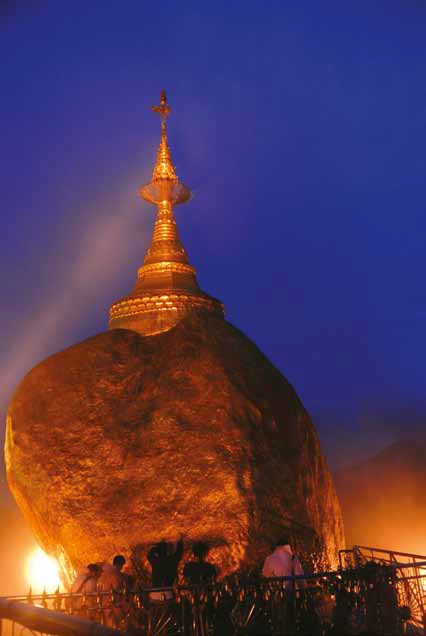 The Kyaikhityo Pagoda built on the boulder that miraculously perched on a cliff. The Shwemawdaw Pagoda in Bago has an interesting feature that is a portion of the fallen pagoda stayed in its position since it was destroyed in an earthquake. In fact, the pagoda had suffered from several earthquakes.

The itinerary went something like this – upon fly-in, we spent a leisurely day in Bangkok before taking-off to Yangon, Myanmar, followed by 4D3N tour in various locations in Myanmar and then, a day of frenzy shopping in Bangkok before we return to Kuala Lumpur.

Even though Myanmar is a close neighbour of Thailand and both are Buddhist countries, she has a distinct culture and heritage of her own. 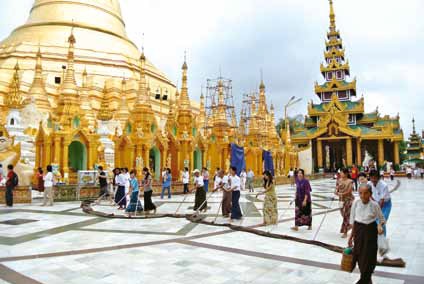 Volunteers cleaning the floor at Shwedagon Pagoda. Shoes are not allowed in temples and pagodas. Kyaik Pun Paya is a temple in Bago 4 Buddha statues are seated back to back. This indention filled with water was meant to allow the former kings of Myanmar to view the reflection of the pagoda without tilting their heads backwards which might cause their crowns to fall off. Shwethalyaung reclining Buddha in Bago is the second largest in the world at 55m length and 16m of height. 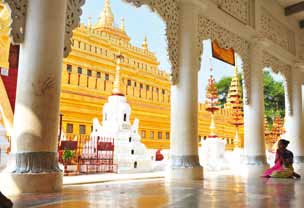 Shwezigon Pagoda in Bagan was built to enshrine one of the 4 replicas of Buddha’s tooth relic in Sri Lanka. Built on the Singuttara Hill of Yangon, the Shwedagon Pagoda is the most sacred Buddhist pagoda for the Burmese people. It has the relics of the past 4 Buddhas enshrined in it, including the 8 strands of Gautama’s hair. It is believed to have existed for more than 2,600 years.

Our mystical journey began with a ride on an open air truck and sat on a sedan up to the misty mountain Mt. Kyaikhtiyo in Mon State. That is where the Kyaikhityo Pagoda rest on top of a huge boulder that balances on the edge of a cliff. What a miracle it is! It is even more amazing that the boulder is covered in gold and hence, its other name – the Golden Rock. The 5.5m high pagoda is believed to be enshrined with the Buddha’s hair relic. Every year on the night of December 31st, the Golden Rock glows when 9000 lamps are lit up and it is filled with the fragrance of 9000 flowers offered by the pilgrims.

Bagan is probably the most mystical city in Myanmar, if not in Southeast Asia. Bagan is an ancient city with more than 1000 years history and almost 2,400 pagodas filled the plains of this heritage site. Bagan was once the capital city of the Kingdom of Myanmar in the early 11th century. Now it is also famous as a centre where skilled artisanscraft their lacquer wares.

Yangon, the capital city of Myanmar exhibits a touch of colonial accents as well as the strong Burmese culture. Yangon was known as Rangoon during its days under the British rule. It is the country’s largest city and also the most important commercial centre.

Shwesandaw pagoda located in Old Bagan is believed to enshrine a Buddha hair relic from Thaton. It is a good spot to watch the sun setting over the plains of 2,400 pagodas.

Using Bangkok as a springboard for travels in Myanmar is a smart option. The reason being the moment we return to Bangkok, the upbeat tempo of Bangkok will help neutralise the temple-fatigue in us, in case of any. Bangkok’s new shopping destinations (Asiatique The Riverfront and Terminal 21) will definitely trigger the frenzy shopping
senses in you.

Bangkok Airways has daily flights from Bangkok to Yangon and Kuala Lumpur to Koh Samui. Bangkok Travel Club tour packages to Yangon are priced from 20,500Baht onwards. Should you need more information on travel packages, do browse through the pages of bangkokair.com. The bustling market place in Bagan where locals go for their daily needs.

Bogyoke Aung San Market in Yangon is also known as Scott Market where antiques and souvenirs are sold.

The truck that took us on the winding road up to Mt. Kyaikhityo Loykrathong • A Tribute to Mother Nature 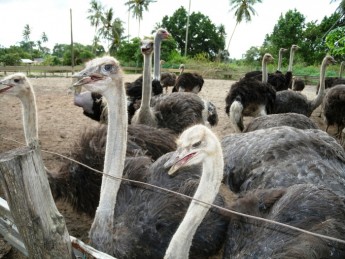