That’s Luang Prabang – where spiritual and hedonist indulgence takes over

It was about an hour before dawn when we left for Sakkaline Road to join the locals in Tak Bak (the Buddhist alms offering to monks). This is my deepest impression of the Lao people when I visited Luang Prabang recently. That’s Luang Prabang where spiritual and hedonist indulgence takes over.

It was about an hour before dawn when we left for Sakkaline Road to join the locals in Tak Bak (the Buddhist alms offering to monks). This is my deepest impression of the Lao people when I visited Luang Prabang recently. In this world of materialistic influences, the Lao people still lead a humble life of Buddhist teachings and the practice the culture of alms giving to the monks, despite living on meagre incomes as farmers. Every morning more than 200 monks from various temples walk through the streets clad in their saffron robes, each of them holding a brass bowl in a rattan basket with a shoulder sling. Pilgrims are on their knees and offer cooked sticky rice to the monks with much respect. I heard that the monks would only take whatever that is sufficient to feed them for the day and any excess sticky rice from their alms bowl would be distributed to the poor. For tourists who wish to take part in this alms offering, the hotel or travel agency could help with the arrangement of sticky rice supply. Wat Xieng Thong, built during the 16th century, is probably the oldest and most beautiful temple in Luang Prabang with intricate carvings and wall ornaments. It is located on the banks of the Mekong River. It was also a temple for the royal family as the Xieng Thong Palace is beside the temple. Opens daily 08:00 to 17:30 Entrance Fee 20,000kip. Intricate carvings in the temple of Wat Xieng Thong. This was King Sisavang Vong’s Royal Palace built in 1904 during the French colonial rule. After the communists took over in 1975, the palace was converted into a national museum. There are many interesting royal objects and gifts from foreign dignitaries. Amongst them are things like the Lao flag that was taken on the moon voyage, etc. Photography and bags are not allowed in the museum. Opens daily except Tuesday 08:00 to 11:30, 13:30 to 16:00 Entrance Fee 30,000kip. Wat Haw Pha Bang inside the compound of the Royal Palace Museum. It has an interior of gold which glows brightly when the sunlight reflects on the white floor. 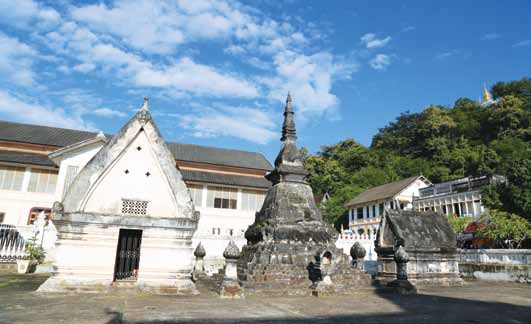 Wat Mai Suwannapumaram located on Sisavangvong Road about 100m away from the Royal Palace Museum. 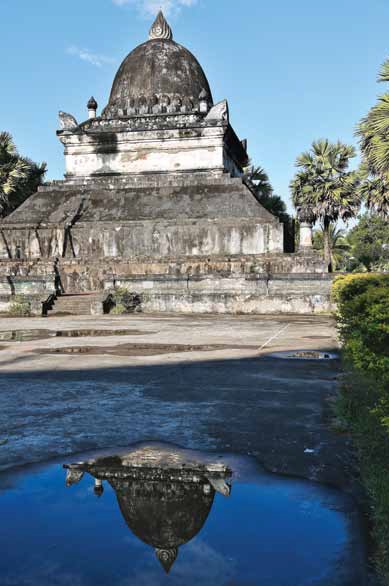 The famous “watermelon stupa” That Mak Mo constructed within the walls of Wat Visounnarath. Another name of this temple is Wat Vix Dun which is also one the most ancient temples in Luang Prabang. Opens daily 08:00 to 17:30 Entrance Fee 10,000kip. 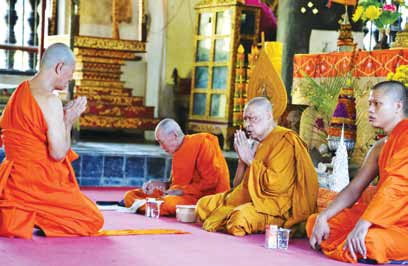 Amongst the many Buddha statues in Wat Visounnarath. Another alternative to explore Luang Prabang is to get out of the town, hop on a boat and go for a rural sightseeing. Ting Cave is a temple cave located by the banks of the Mekong River. It is a practice for pilgrims to deposit Buddha statuettes here for good luck. It takes about 2 hours of travelling on a motorised boat to reach here. Ban Xiang Hai is a village about half way from Luang Prabang to Ting Cave. This village is famous for its Lao whiskey production.

For more than 620 years of history, Luang Prabang has survived various foreign rulers like the Khmer, Siamese and French. Luang Prabang was the early capital of Laos which
was then moved to Vientiane. So now Luang Prabang has a bit of this and that. Their spoken language sounds of similarity to Thai and hence, if you have a smattering of Thai, you should be able to get by easily. Their cuisines have a pinch of Cambodian and Thai influences and will most likely whet our Malaysian appetite. The French have left their legacy here with their brick-and-stucco architectures and of course, the mouth-watering baguette. However, the sight of some Soviet jeeps and clusters of Chinese shops in the town are some reminders of the alliance with the Soviet and Chinese communists. It was only in the late 1980s that Laos began their economic reforms and opened to tourism. Luang Prabang earned its place on the UNESCO World Heritage List in 1995. 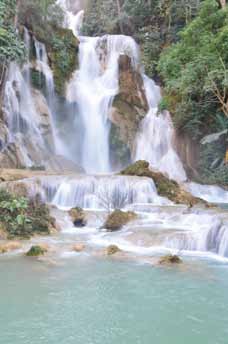 For a dose of nature and a cool experience, Kuang Si Waterfall is an excellent option. Located about 25km south of Luang Prabang, Kuang Si is an amazing picture of gushing water dropping from 80m of height. Kuang Si waterfall is a beautiful picture of water cascading down the pools, criss-crossing rocks and trees. There is also a Bear Rescue Centre in the vicinity of the waterfalls for the Asiatic Black Bears that are rescued from poachers. 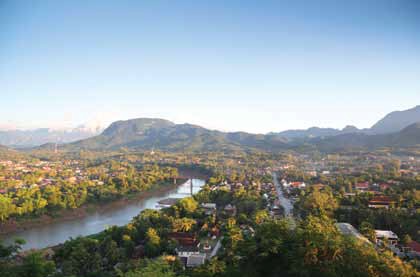 From the top of Phousi Hill, catch a spectacular sunset view of Luang Prabang, the Mekong River and its surrounding greenery. 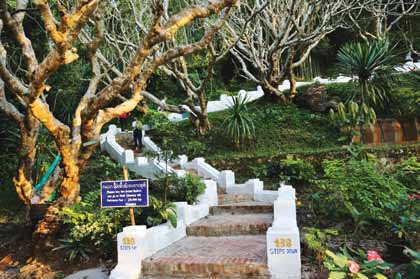 It takes 328 steps winding through the Champa Lao trees to reach the top of Phousi Hill to visit Prathat Phousi. Entrance to the steps is opposite the Wat Mai Suwannapumaram.

Apart from temples and monasteries, Luang Prabang has its fair share of spa, fine restaurants and café for the hedonist in you. Luang Prabang is a quaint little town with only a few roads circling around a peninsular where two rivers meet, the Mekong and the Nam Khan. You won’t lose your way here as the roads are connected, just one way or another you will end up on Sisavangvong Road, the main road where there are restaurants, café, guest house, spa and shops that cater to the tourist needs. Luang Prabang attracts not only budget travellers but also travellers who revel in boutique luxuries like Amantaka or the Xiengthong Palace or Shinta Mani Luang Prabang hotels. 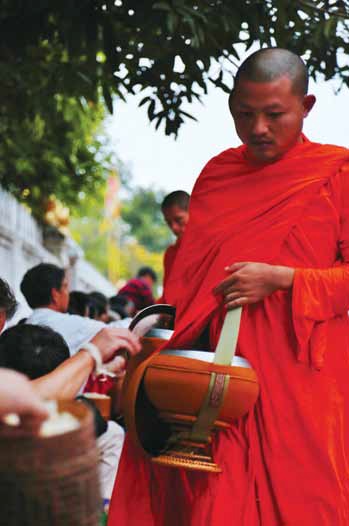 The Tak Bak (alms offering) starts around 6am every morning. The night market opens from 5pm – 10pm at Sisavangvong Road. It offers lots of ethnic handicrafts and foodstuff. The classic buildings on the main street in Luang Prabang – Sisavangvong Road. Locals taking their breakfast at a road side stall. 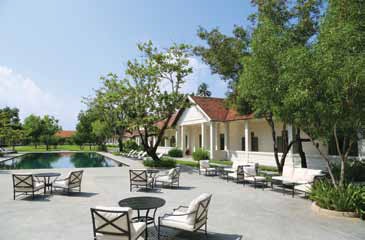 Amantaka – a luxury resort with classic French colonial architecture where every unit is an exclusive sanctuary. Where every room is a villa and Shinta Mani boasts of a pool at the top of a hillock overlooking the heritage town of Luang Prabang. 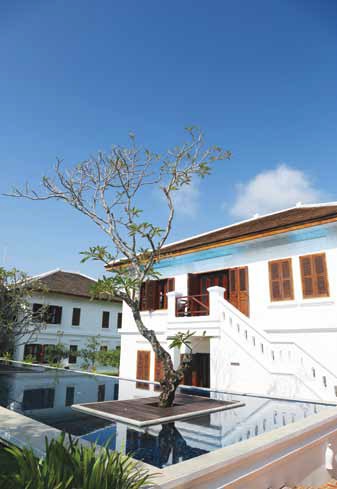 Xiengthong Palace – the ideal place where you could experience luxury amidst the tranquillity of the last residence of the Royalty of Laos.

The quiet ambience is just too appealing for me just to laze around with a book in one hand and a cup of coffee in another. However, as part of my travel habit, I would love to mingle in the local market to catch a doe of the local lifestyle. My visit to Luang Prabang would not be complete had I not made the trip to the spectacular waterfalls of Kuangsi that really caught my breath away.

Flights – As there are no direct flights from Kuala Lumpur to Luang Prabang, Bangkok is the best gateway to connect these two places. Bangkok Airways, Asia’s boutique airline, has daily flights to Luang Prabang. Get their flight schedule at www.bangkokair.com

This trip to Luang Prabang was made possible by TAT (Tourism Authority of Thailand) and Bangkok Airways.

Freezing the Frozen at Harbin