You’re in love and have made the commitment to seal the deal. But where to hold the wedding? Okinawa, Japan, naturally. 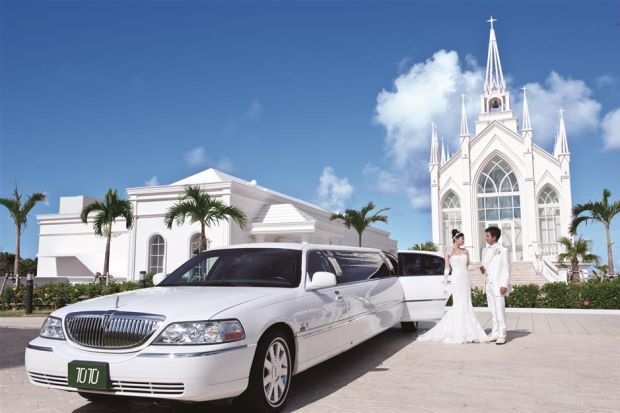 BY ISABELLE LAI
Standing on a stretch of white, sandy beach in Okinawa, Japan, I feel as though I’m striking a pose in a photo studio or against a holographic mural. The sky is a bright azure blue that looks almost unreal, while the sea that stretches out ahead of me is a luminous emerald which then turns into a shimmering navy blue.

But the sun beating down on my face, the cold wind blowing through my hair and the sound of waves crashing against the shore bring me back to reality.

It is so easy to see why Okinawa, the southernmost prefecture of Japan comprising 160 islands, is the country’s top resort wedding destination for couples searching for the perfect scenic spot to tie the knot.

Because it also enjoys a subtropical oceanic climate with an annual average temperature of around 22.7°C, couples are virtually guaranteed that their wedding day weather will be perfect – cool with sunny blue skies.

So what exactly is a resort wedding? Simply put, it’s a one-stop destination where you can do a photoshoot for your wedding photos, arrange a wedding ceremony on the resort grounds which then transitions immediately to your honeymoon without needing to pack or fly anywhere else.

All you need to do is wake up the next day and get ready to enjoy your first few weeks as husband and wife by exploring the various delights Okinawa has to offer, including marine sports, shopping, dining, beauty treatments, sightseeing and cultural exhibitions.

But an additional and significant pull factor about Okinawa’s resort weddings is that almost all of them offer extremely popular “chapel wedding” packages – with no religious affiliation needed.

In co-operation with selected bridal houses, wedding chapels have been built on resort grounds, and couples can choose which resort/chapel they feel best reflects their vision of a dream wedding.

These chapels were constructed specially for wedding ceremonies, not religious services, and it is a concept that has struck gold among many couples who are simply in love with the idea of romantic church weddings.

Picture the blushing bride walking down the aisle in her flouncy white wedding gown; her tuxedo-clad husband smiling at her as they exchange rings; and the moment when they emerge from the church as a married couple while their loved ones shower them with floral petals.

During my week-long media familiarisation trip to Okinawa Island (the main island of the prefecture and home to US military bases), I had the opportunity to visit six wedding chapels, some of which were really breathtaking.

Although built in various styles, they share the same clean lines – they boast a spacious ceremony hall, flooded with sunlight from glass panels that look out into dancing waves and cloudy blue skies.

Standing at the altar and looking towards the church entrance, you will be able to visualise the wedding guests smiling as they witness the ceremony from the tastefully decorated pews. A particularly charming feature that all the chapels have is a standalone arch with a bell fixed to it, for the married couple to perform the bell-ringing ceremony after the flower shower.

For most of the chapels, the beach is less than a five-minute walk away, making it a lovely spot for after-wedding photography with loved ones before adjourning to the banquet hall.

I loved the Lazor Garden Alivila Cristea Church at Hotel Nikko Alivila, a truly impressive pure white building, with its numerous spires topped by crosses and an imposing entrance with a grand staircase. Besides the huge glass-paned walls, its clear glass aisle stands out prominently, giving the impression that the bride is walking on the sea itself.

The airy and spacious interior of the Lazor Garden Alivila Cristea Chapel.

Also on the resort’s grounds is the red Spanish-style roofed Alivila Glory Church, equipped with a church organ and rich wooden pews. Both are under Bridal House Tutu Okinawa, which also handles the south European-style Kanucha Stelar Church at Kanucha Bay Hotel & Villas. It boasts a lovely stained glass centrepiece that incorporates the Okinawan colours (signifying its blue seas), flower, stars and a cross.

Another option for those who love the stained glass look is the cream, white and blue Mediterranean-style Rizzan Le Angemarry Chapel by Chiyoda Bridal House. Located just 5m from the beach, the altar looks as though it is floating on the sea while the chapel features Christian-themed stained glass windows along with a dome ceiling depicting nine angels.

The beautiful stained glass windows and painted dome of nine angels looking down at the altar of the Rizzan le Angemarry Chapel.

At some of the wedding chapels, Christian elements are permanently worked into their design while at other places, the elements are removable.

A dreamy walk down the aisle in Coralvita Chapel’s stunning ceremony hall. It is located within the ANA InterContinental Manza Beach Resort.

For those who can’t wait to get married, the SeaShell Blue Chapel is located at the Southern Beach Hotel & Resort, which is a 20-minute drive from Naha Airport, and a short walk from the popular Bibi Beach Itoman. 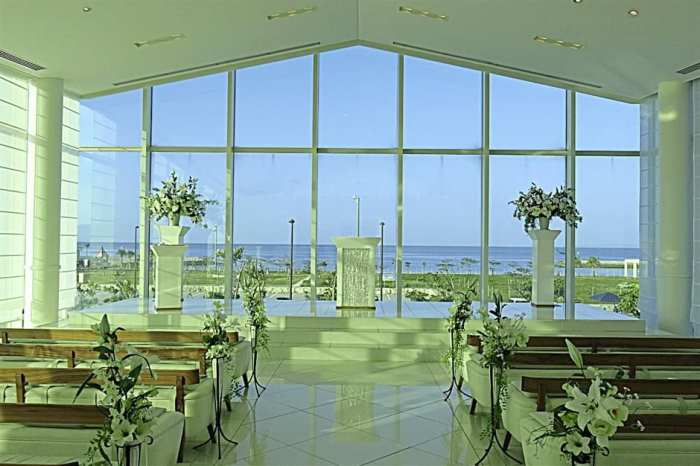 Easier on the wallet will be the Chapel Ciel de Amour by Sunny’s Wedding, located in a beachside condominium in central Chatan near the famous Mihama American Village. Three strategically placed artificial rocks – named the Rock of Encounter, Rock of Pledge and Rock of Happiness – can be seen in the blue sea beyond the chapel’s glass wall.

Guests can also adjourn to the rooftop garden to enjoy the breeze as they witness the newlyweds perform the bell-ringing ceremony to mark their union.

If you fancy tying the knot at a place where the leaders of the most powerful nations have hung out, then Bankoku Shinryokan (which means “Bridge Between Nations”) is your destination. It hosted the Kyushu-Okinawa G8 Summit in 2000, which was attended by former US president Bill Clinton, former British prime minister Tony Blair and Russia’s Vladimir Putin, amongst others. There are shelves crafted from indigenous trees displaying their signatures.

Located on Busena Point, it is a stunning, tropical-style complex with a lot of wood accents, Ryukyu red roof tiles and various multi-purpose function rooms and halls.

Weddings aside, Okinawa is also a must-visit because there are so many things to see, eat and do. Learn about its ancient Ryukyu culture and history, look for good shopping deals or dive amidst coral reefs and tropical fish.

I loved Ryukyu Mura in Onna, where traditional Okinawan culture is preserved. Ten 200-year-old houses from all corners of the prefecture have been moved to this folk village. Visitors can learn about the old Okinawan way of life, including taking cultural lessons from traditionally clad staff, such as weaving, bamboo-carving and playing the sanshin guitar.

Another historical place is Shurijo Castle Park in Naha, open to the public in 1992 after parts of it were beautifully reconstructed following its destruction in the 1945 Battle of Okinawa. According to records, Shurijo Castle – a designated Unesco World Heritage site – was the administrative centre and official residence of the Ryukyu kings; there is a palpable sense of grandeur and wonder as you walk around the grounds.

Shopaholics should not miss the 1.6km-long Kokusai Street in Naha, where all sorts of shops abound, selling clothes, gadgets, shoes, bags, food and souvenirs.

A great place for family activities or even a romantic date is the Busena Marine Park in Nago City, where the glass-bottom boat ride and underwater observatory offers a 360° view of the sea teeming with tropical fish. These are beautiful ways to get up-close to the creatures of the underwater world. 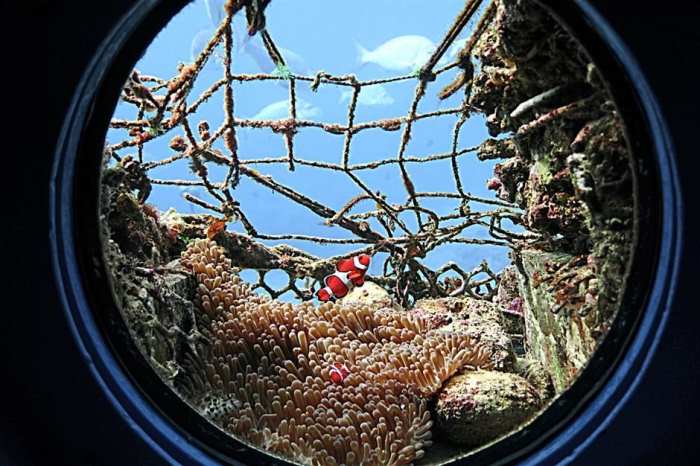 Through one of the peepholes in the Busena Marine Park observatory, one can see clownfish swimming among sea anemones.

Another enjoyable place to visit is the Okinawa Churaumi Aquarium, where visitors gasp in wonder when they see whale sharks and manta rays looming towards them from behind a massive acrylic window.

When it comes to food, having beer and barbeque together is a time-honoured tradition. We took a jaunt over to the Okinawa Beer Garden in Onna Village, where you can gorge on all-you-can-eat chicken, beef, pork and seafood with a glass of local favourite Orion beer.

Okinawa, where pig-farming goes back 600 years to the Ryukyu Kingdom, is also famous for its mouth-watering Agu pork, renowned for its tenderness, smoothness and elasticity. Okinawa is also known for its soba, which differs from traditional Japanese soba. Iit is made of wheat rather than buckwheat flour and resembles udon noodles. 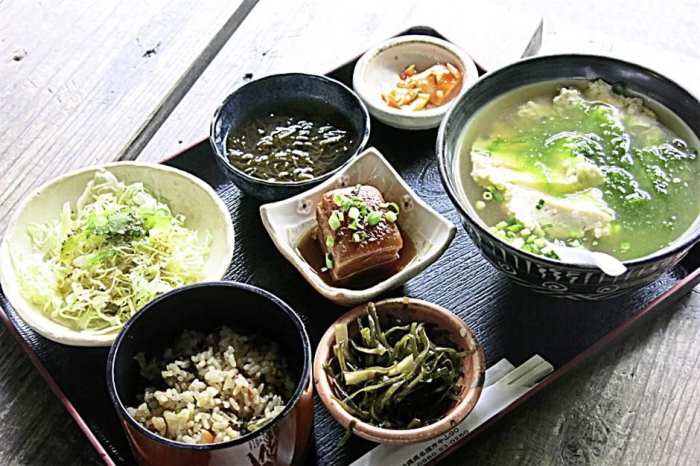 A delicious set meal of Okinawan cuisine at Ufuya Restaurant, a beautifully restored folk house that is over 100 years old.

We savoured the delicious Okinawan soba at Nahatei Restaurant right after touching down at the airport, as well as more bowls of the savoury broth, chewy noodles and tender pork at Ufuya Restaurant in Nago City, famous for its mouth-watering food and traditional setting.

Our tour guide Taira Namika told us at the beginning of the trip, “My tour groups always tell me how much they love Okinawa and how they must return again.”

Seven days later, en route to Naha Airport, I told her, “You’re right. I’ve fallen in love with Okinawa and I will return!”

This trip was sponsored by the Okinawa Convention and Visitors Bureau, and Apple Vacations. For a full list of Okinawa’s wedding chapels visit Okinawa Story. 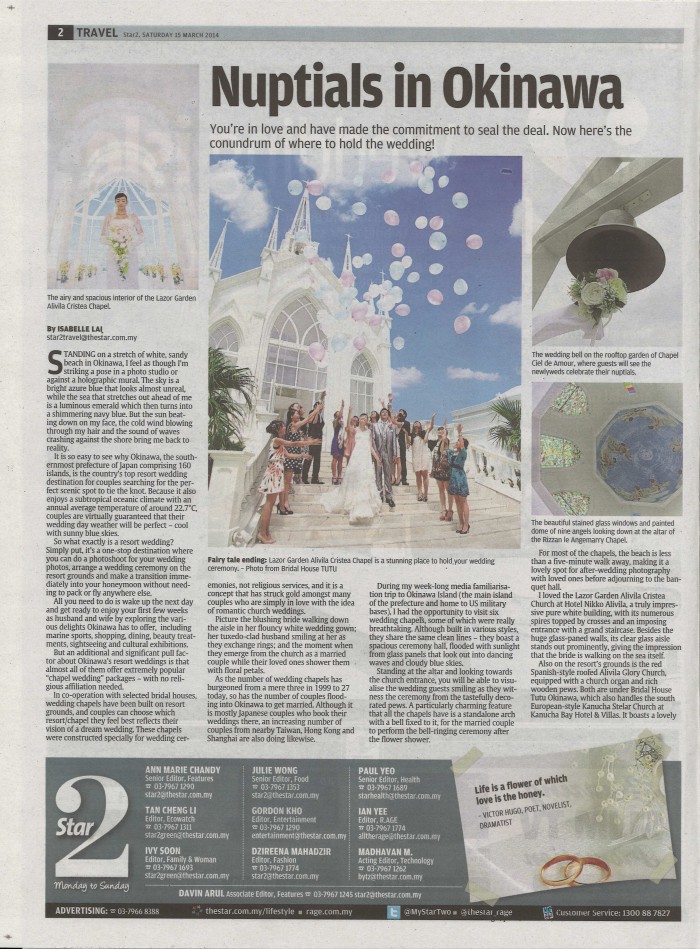