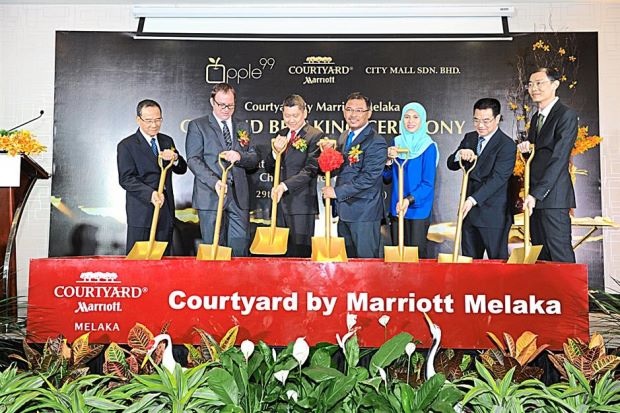 Marriott International is an American diversified hospitality company that manages and franchises a broad portfolio of hotels and related lodging facilities. The company is one of the world’s leading hoteliers with approximately 3,900 operated hotels and 650,000 rooms. It reported revenue of almost US$12bil(RM38.8bil) in 2012.

Apple Vacations Group was set up 18 years ago as a travel agency. It has now grown to become a dynamic travel agency. With operations in Singapore, Jakarta, Bangkok, and Tokyo, the group now also has interests in aviation logistics, e-media and advertising, boutique hotels and property investment, while continuing to play a strong in the Malaysia’s tourism industry.

A ground-breaking ceremony officiated by the Chief Minister of Malacca Datuk Seri Idris Haron for the new hotel was held in Malacca at the end of last month.

The new four-star Courtyard by Marriott will be located in the heart of Malacca’s central tourism district. The 24-storey hotel will feature an executive floor, 284 rooms, an 800–person capacity pillar-less multi-function ballroom and is scheduled to be opened by 2017.

Once completed the hotel is expected to contribute significantly to Malacca’s tourism sector and also create employment opportunities.