The magic of Harry Potter lives on in Osaka

Muggle fans of Harry Potter who cannot get enough of him and his magical world should head on over to Universal Studios Japan. 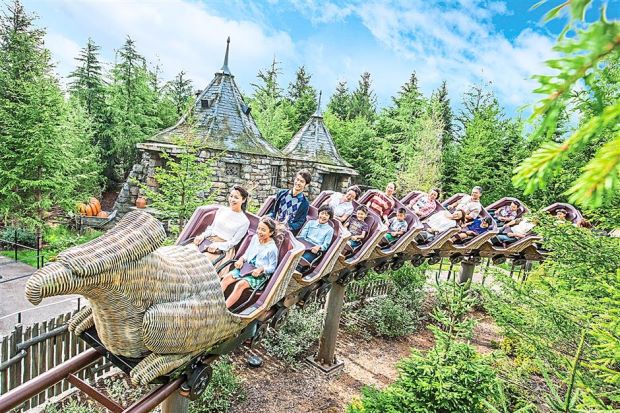 The family-friendly Flight of the Hippogriff roller-coaster.

The magic of Harry Potter lives on in Osaka

Muggle fans of Harry Potter who cannot get enough of him and his magical world should head on over to Universal Studios Japan.

When a colleague asked whether I am a fan of the Harry Potter series, I immediately answered “No” without a second thought. Although I have read all seven books in the series and watched the film adaptations, the magic ended for me when the final movie was released in 2011. Go figure!

Little did I realise that magic would be rekindled when I was assigned to cover the media tour of Universal Studios Japan’s newly opened Wizarding World of Harry Potter in Osaka.

That sense of wonderment when the media entourage was led by Universal Studios representatives through the Forbidden Forest to the entrance of Hogsmeade Village was akin to my reading the book for the first time as a teenager.

Universal Studios had spared no expenses in re-creating the magical world the boy wizard and his friends lived in, down to every meticulous detail, across an area of 3.64ha. I could only stare with amazement at the array of shops on the village’s high street that had been brought to life from the pages of the books.

The Hogwarts Express has arrived at Hogsmeade’s Platform Nine And Three-Quarters. — Photos from Universal Studios Japan.

Walking into the recreated Hogsmeade Village is like being thrust into the magical world of Harry Potter itself. 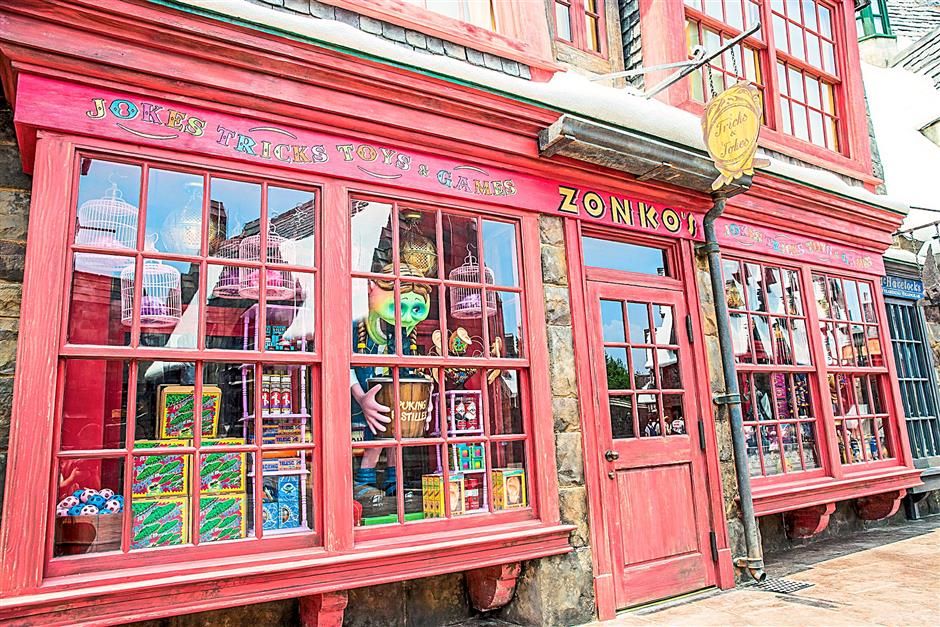 Novelty items: Zonko’s Joke Shop in Hogsmeade carries a host of unusual tricks and other things.

Those familiar with the Harry Potter lore would surely recognise the Ollivanders wand shop, the Hog’s Head, Honeydukes and the Owl Post, among others. The street itself is filled with little gimmicks and entertainment programmes – like a wizard who helps visitors pick their first wand with accompanying special effects or the teasing voice of Moaning Myrtle (in Japanese) in the men’s bathroom.

Being Asia’s very own Harry Potter themed area, Universal Studios Japan is positioning its prime investment to attract more visitors from Japan and around the world. Looking at the number of Japanese and foreign visitors that day, it was little wonder that Japan’s Prime Minister Shinzo Abe said that the newest addition would contribute to energising the local economy.

After exploring the shops in the sweltering summer heat, the cold, creamy butterbeer was a welcome treat at The Three Broomsticks tavern before we went for a ride on the family-friendly Flight of the Hippogriff roller-coaster.

The main draw of the area is clearly the massive Hogwarts Castle, judging from the extremely long queue that day. The Harry Potter and the Forbidden Journey dark ride is actually housed within the castle.

Waiting in queue to take the ride was an experience in itself as it involved a tour of the inside of the castle, featuring classrooms and many reproduced items from the books and movies. Strapped into an “enchanted bench”, we were plunged into a simulated flight alongside “Harry Potter” and “Ron Weasley” as they got chased by a Hungarian Horntail dragon and battle Dementors in the five-minute ride.

Among the entertainment programmes in The Wizarding World of Harry Potter area is the Triwizard Spirit Rally performance by students from Beauxbatons and Durmstrang.

Fans of the Harry Potter series would surely be thrilled by the new area as they see their favourite magical locations come to life while families can enjoy the numerous rides and attractions at the theme park.

The rest of the theme park tour was spent checking out some of the other attractions. There was the Hello Kitty Fashion Avenue which featured the one-of-a-kind Kitty with eyelashes.

I was told that this particular Hello Kitty had been to the United States to study fashion, picking up make-up skills along the way, hence the bottom lashes. Not my kind of thing but interesting, nonetheless.

The other highlights were the Hollywood Dream-The Ride-Backdrop roller-coaster and The Amazing Adventures of Spider-Man dark ride.

The Backdrop coaster was particularly intense as the train is flipped around so there was no way for me to brace for the coming drops and turns. Meanwhile, the award-winning Spider-Man ride certainly lived up to its name, what with the amazing flame, water and 3D special effects. 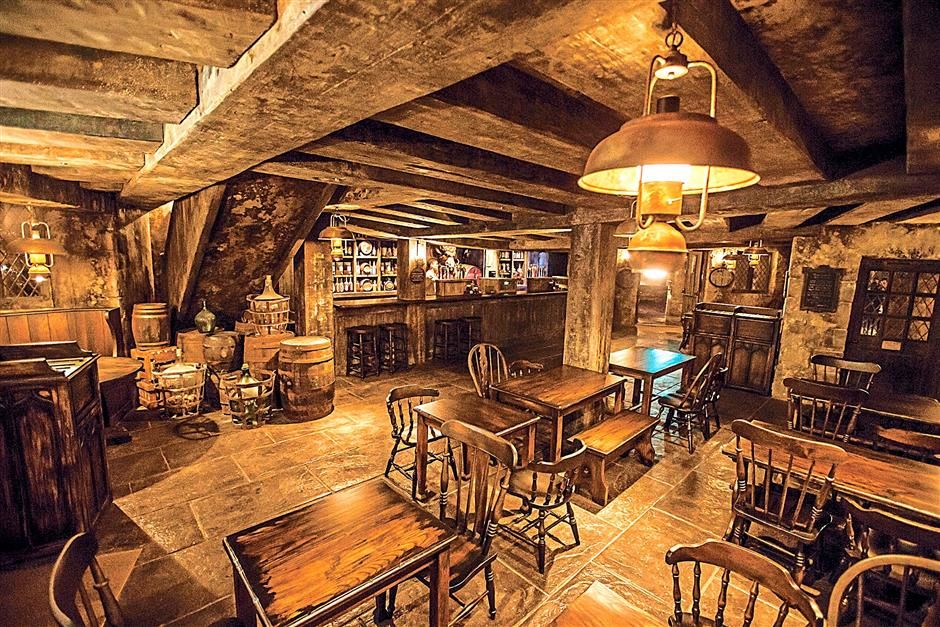 The Three Broomsticks tavern frequented by students and teachers of Hogwarts from the Harry Potter series.

The Wizarding World of Harry Potter may be the most happening location in Osaka right now but it is by no means the only attraction the city has to offer. Two fellow Malaysian journalists and I were taken on a tour of the city and introduced to some of its most interesting attractions on the third day of our trip.

We first took a ride in an aqua-bus along the Okawa River that runs through central Osaka right up to the entrance to the iconic Osaka Castle, which we did not get to visit due to the tight schedule. The next stop was the Osaka Aquarium Kaiyukan in the Tempozan Harbour Village.

Being one of the largest aquariums in the world, the Kaiyukan recreates the natural environment of the Pacific Rim, and showcases some 30,000 creatures and about 620 species. We rode the 112.5m high Tempozan Giant Ferris Wheel and were treated to a sweeping view of the Osaka Bay area.

For a view that would beat the one at the peak of the Ferris wheel, we were taken to the recently opened Abeno Harukas skyscraper, currently the tallest building in Japan.

What a sight we beheld from the Harukas 300 observation deck! The entire city could be seen from the 60th floor of the building – from the Rokko mountain range to the Akashi Kaikyo Bridge and the Kansai International Airport right up to Kyoto in the distance. That was not the end of it, though, as we were led to the helipad, the highest point of the building at 300m above ground level where the view was even more breathtaking.

A mug of cold, creamy butterbeer — served at the tavern — is a refreshing treat on a hot day.

Right after that, we had a taste of the famous dojima roll at the Salon de Mon cher cafe in Nishishinsaibashi. Tourists from China and South Korea are known to stop by this shop just for this cake.

A bite into the dojima roll confirmed why it is so popular. The cream, made from the finest milk from Hokkaido, wrapped in a dense sponge layer, left a lingering sweet taste in my mouth long after I had swallowed it. The cake was so delicious, I couldn’t help expressing my enjoyment in the Kansai dialect: “Umai (Delicious)!”

Our last stop was the main shopping arcade of Shinsaibashi-suji. At the end of the covered street is the Ebisu Bridge where I was bemused by the large number of tourists taking photographs while striking a similar pose as the running man in the flashy Glico billboard. I later learnt that the Glico man had been crossing the finish line in the same spot since 1935 and had become an icon of Osaka.

Across the bridge is the Dotonbori area famed for its variety of good food. Here, one can find Osaka’s signature street food, such as the takoyaki and the okonomiyaki or even the blowfish sashimi, which I tried with trepidation and enjoyed immensely.

As the trip came to an end, I felt that while destinations like neighbouring Kyoto and Nara are attractive for their traditional charm, Osaka is worth a visit for its modern lifestyle and entertainment. An Osaka native told me that living in the second largest metropolitan area in Japan, the residents strive to distinguish themselves by making it the place where smiles are made. That’s so true because I was still smiling when I boarded my flight back to Malaysia.

The magic of Harry Potter lives on in Osaka, 1 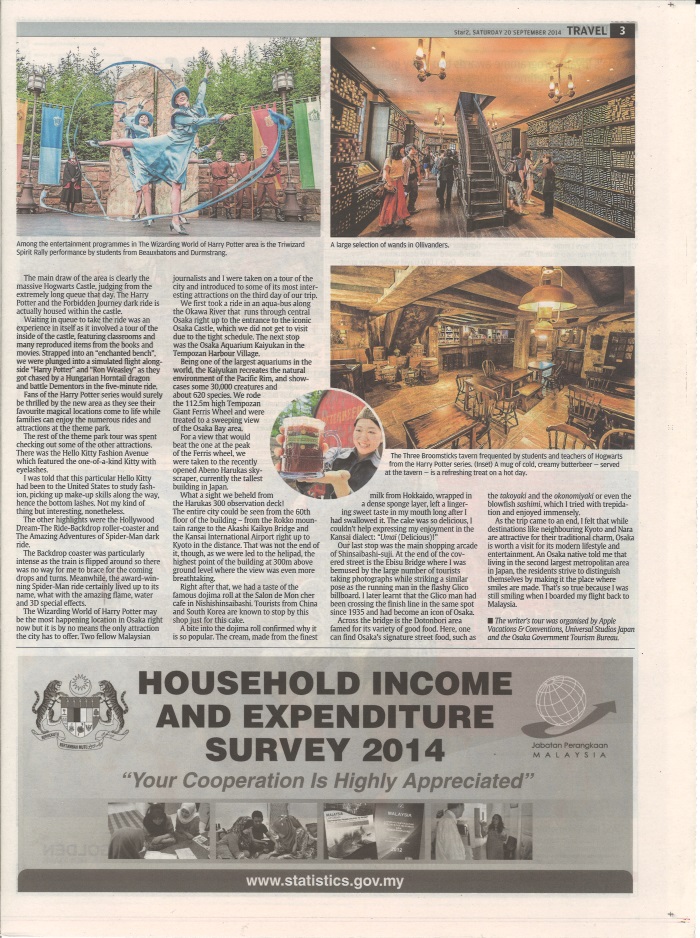 The magic of Harry Potter lives on in Osaka, 2 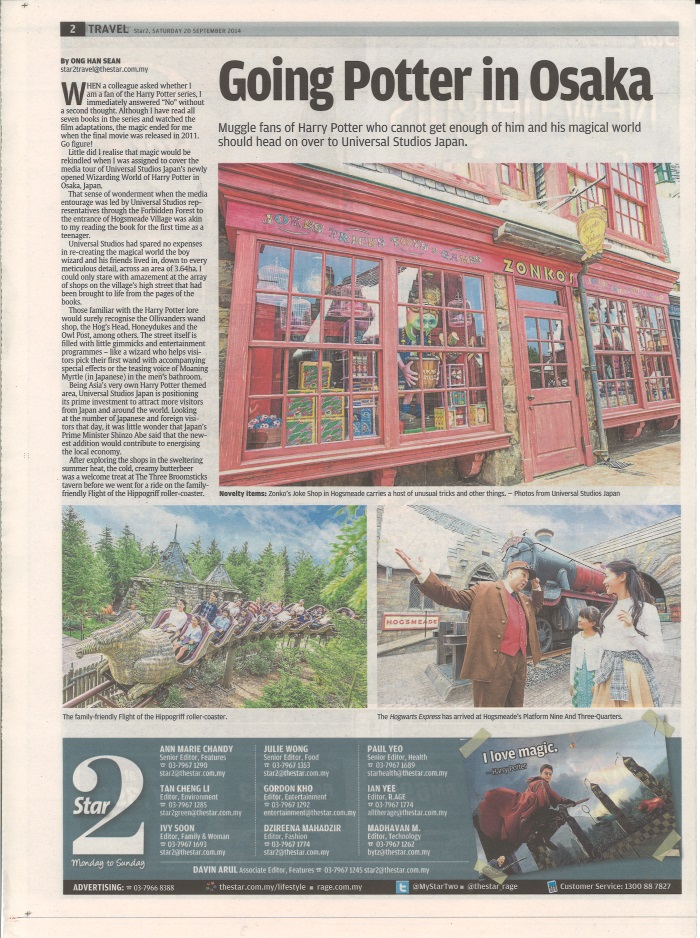 The magic of Harry Potter lives on in Osaka, 3

Malaysians to be exempted from Japan visas from July 1