THE STAR Tzu Chi’s progress a joy for founder

In response to a question on how Tzu Chi could play a role in solving international conflicts and terrorism, Cheng Yen said: “One organisation cannot do everything. Every­body has a role to play. Just do what is right, and don’t count yourself out in good deeds.”

One for the album: Cheng Yen (centre) and organiser Lee San (in white behind Cheng Yen) with members of the media after the group interview in Hualien, Taiwan.

THE STAR Tzu Chi’s progress a joy for founder

Tzu Chi, operating along the teachings of Buddha with emphasis on universal love and human kindness, is famous for its efficient international disaster relief work that has covered more than 30 countries, including Malaysia.

It has also extended its charitable services to remote areas and refugee camps via cash and food distribution, as well as the setting up of clinics, schools, churches and mosques in needy areas.

“I am very grateful that I am able to witness the present Tzu Chi. It is not easy for all Tzu Chi people to attain these achievements,” said the 81-year old spiritual leader in a rare interview, given to 18 journalists from Malaysia, Indonesia and Hong Kong on Tuesday.

The Star was the only English media invited to this interview.

In response to a question on how Tzu Chi could play a role in solving international conflicts and terrorism, Cheng Yen said: “One organisation cannot do everything. Every­body has a role to play. Just do what is right, and don’t count yourself out in good deeds.”

On whether she would come to Malaysia where there were one million supporters of and donors to Tzu Chi, the influential religious master said politely in Mandarin: “Maybe in the next future life. But my time is not up yet.”

A team of doctors surrounding this frail woman leader dressed in a light blue robe has not allowed her to travel out of Taiwan.

She is referred to as shang ren, a title for someone who has attained enlightenment in Buddhism.

She gives sermons to followers worldwide at 5.20am daily via the Da-ai TV channel financed by income generated from Tzu Chi’s recycling programmes worldwide.

She also listens to daily briefings by various working teams from, among others, Tzu Chi hospital, university and schools at 7.10am, and gives her views and instructions after the hour long session.

The visiting media were allowed to sit in on Tuesday.

Before the media dialogue started, co-founder of Apple Vacations Group Datuk Seri Lee San briefed Cheng Yen that he had taken the initiative to organise this media visit so that journalists could understand the good work of Tzu Chi and witness how good values could inject “positive energy” into an organisation that serves society.

“I find Malaysia needing more positive energy to turn it into a better place to live.

“The media can play a role by reporting good deeds done by good people and organisations such as Tzu Chi which I have great respect for,” he said before introducing all the media to the host at Tzu Chi headquarters here in mid-east Taiwan. 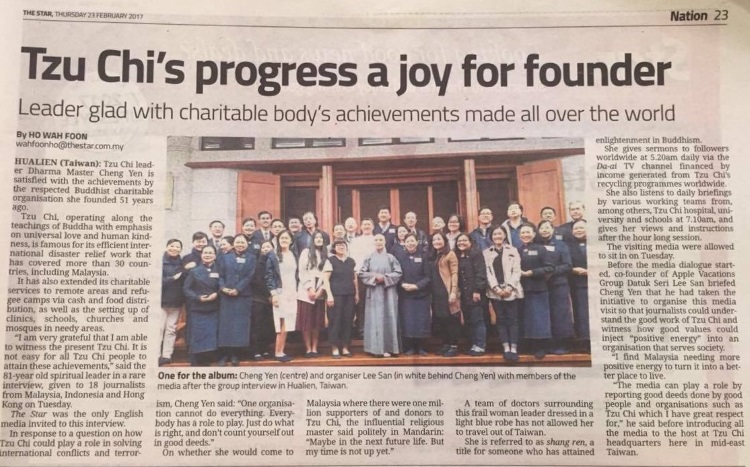