On top of Europe in a train

Upon touchdown in Zurich after a 13-hour flight, we rode the efficient Swiss rail system to the town of Interlaken, so named for its position between the alpine Thun and Brienz lakes.

Sometimes, only a panorama photo will do justice to the sights you see, such as this awe-inspiring view of the mountains that make up the Bernese Alps.

On top of Europe in a train 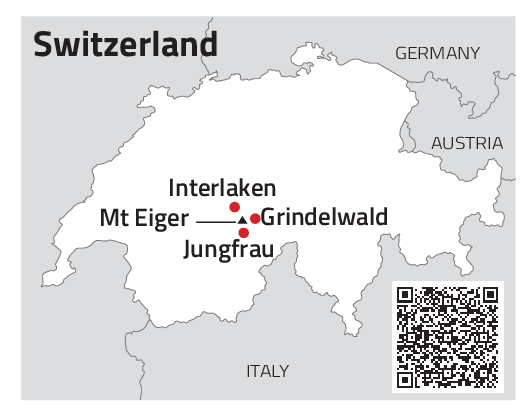 When my editor put my name down for a media trip to cover the San Antonio Spurs and French basketballer Tony Parker playing an exhibition match at 3,545m in the Bernese Alps in Switzerland, I was not sure at first how to pack.

Mid-September would still have agreeable temperatures in the low-lying areas, but up in the Aletschglacier, where the match would be held, wind chill might necessitate something thicker, along with waterproof boots for tramping through the snow.

Covering the match between Parker’s French exhibition team Asvel and Swiss players from the country’s professional basketball league, would be three Malaysian writers, including myself.

We boarded a Singapore Airlines flight to Changi Airport, and then transferred to a Swiss Air flight for Zurich, tickets courtesy of Jungfrau Railways, the sponsor for this trip and the exhibition match.

Upon touchdown in Zurich after a 13-hour flight, we rode the efficient Swiss rail system to the town of Interlaken, so named for its position between the alpine Thun and Brienz lakes.

Stopping at the station of Interlaken Ost (“East”), we boarded a Jungfrau Railway train to Grindelwald, a tourist village about 40 minutes out from Interlaken.

We put up at the Hotel Hirschen, along Grindelwald’s main Dorfstrasse road, for the duration of our stay. 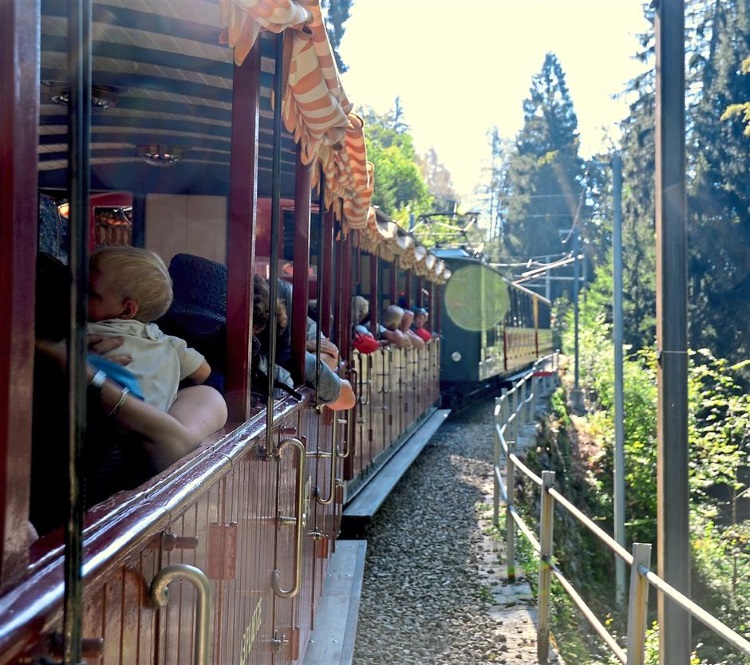 Passengers heading up to the top of Schynige Platte in a quaint railway in Widerswil, in open-air cars which allow them to take in the view of the Thun and Brienz lakes, as well as the Jungfrau, Eiger and Monch mountains.

Otherwise, you could wait your turn (we waited for nearly two hours) at the First Flyer – a zipline able to launch four people simultaneously down to Schreckfeld at speeds of up to 84km/h.

The usual route would be to take the cable-car down back to Grindelwald, but it’s more fun to try out the “mountain cart” – a mix of go-kart and a sledge, with thicker off-road tyres and brakes, and head down.

Again, it was a thrilling 3km ride down, although you do need to look out for the occasional cowpie deposited by the Alpine cows grazing along the hill side!

Upon reaching Bort, perhaps the most thrilling action, but also somewhat difficult at first to master, was riding the “trotti bikes” – basically scooters – to get downhill to Grindelwald station. 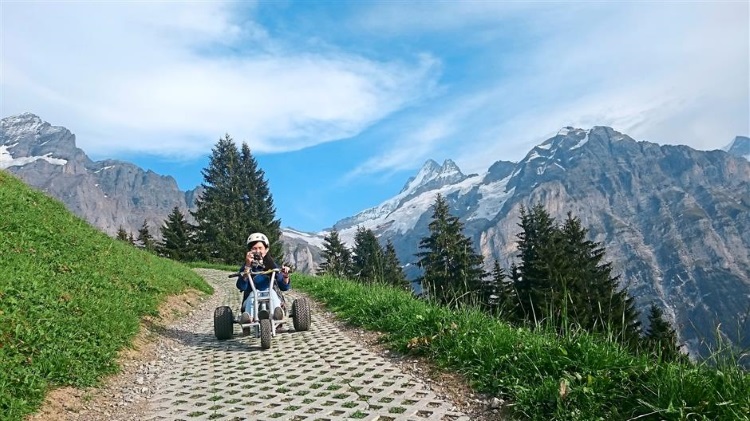 A faster (and probably more fun) way to go down from Schreckfeld to Bort, is to use a mountain cart. These carts depend solely on the downward slope for motion, with riders using a pair of brakes, bicycle style, to stop if needed. Watch out for the cowpies deposited by the Alpine cows.

Within minutes of being on the trotti bike, I skidded off the road but, luckily, into a meadow – with no hidden cowpies waiting.

Slowly pushing and playing with the brakes, riding the scooter soon became a breeze, although not without a thrill of danger on tar roads, and a wipeout now would have a much more painful result than just grass stains.

Downhill all the way, it was a somewhat surreal but relaxing experience hearing the chimes of cowbells, and feeling the rushing air as this writer hurtled down the road, with the Eiger in the background.

Day Two was a trip up to Schynigge Platte, just over a half hour’s ride, in an antique but well-maintained open-air rail coach.

The sunny weather offered a spectacular view of the surrounding peaks, as well as a bird’s-eye view of places such as Interlaken and the two lakes. It is also a popular destination with hikers, many of whom had their Black Diamond or Karrimor hiking poles in their backpacks. 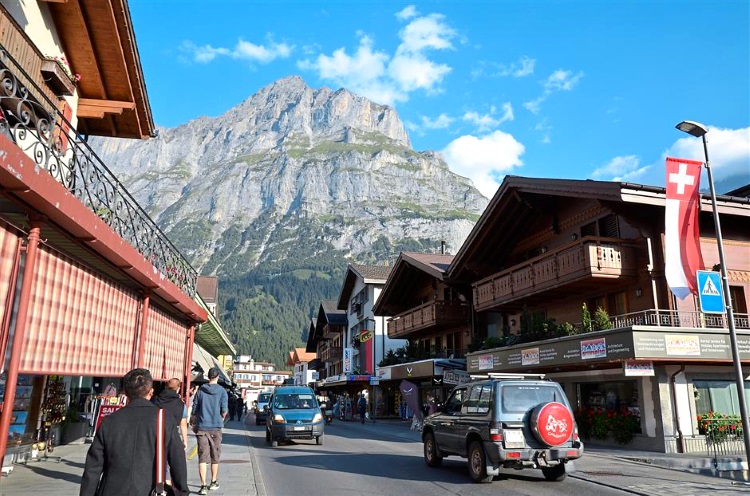 The Eiger dominates the view from any angle you look up while walking through Grindelwald.

For those who enjoy nature, Schynigge Platte has several circular trails, with names such as the Natural Cinema path, another descending to the Daube vantage point, as well as the Schynigge Platte-Faulhorn-First trail.

Walking along the area and further up the cliff trail, you’ll see a number of large wooden rectangular frames erected at particular spots; someone had worked out that these were the best vantage spots for camera shots of the Alps.

At the other end of the station, there is the Botanical Alpine Garden, the twin of Japan’s Rokko Alpine Garden in Kobe.

It would have been nice to try out one of the shorter mountain trails, but we were due back at Grindelwald to get ready for the evening event in Harderkulm, Interlaken’s local mountain.

Travelling to Jungfraujoch to cover the exhibition match meant we had to get to Kleine Scheidegg station first, then travel by cogwheel train in a tunnel bored through the solid rock of the Eiger.

Jungfraujoch is truly “the top of Europe”, being the highest-placed train station with several attractions, not including the Aletsch Glacier, itself designated a Unesco Natural World Heritage site.

One could take an elevator and go up vertically for 115m to the Sphinx Observation Deck for stunning views of Jungfrau itself and the neighbouring peaks. 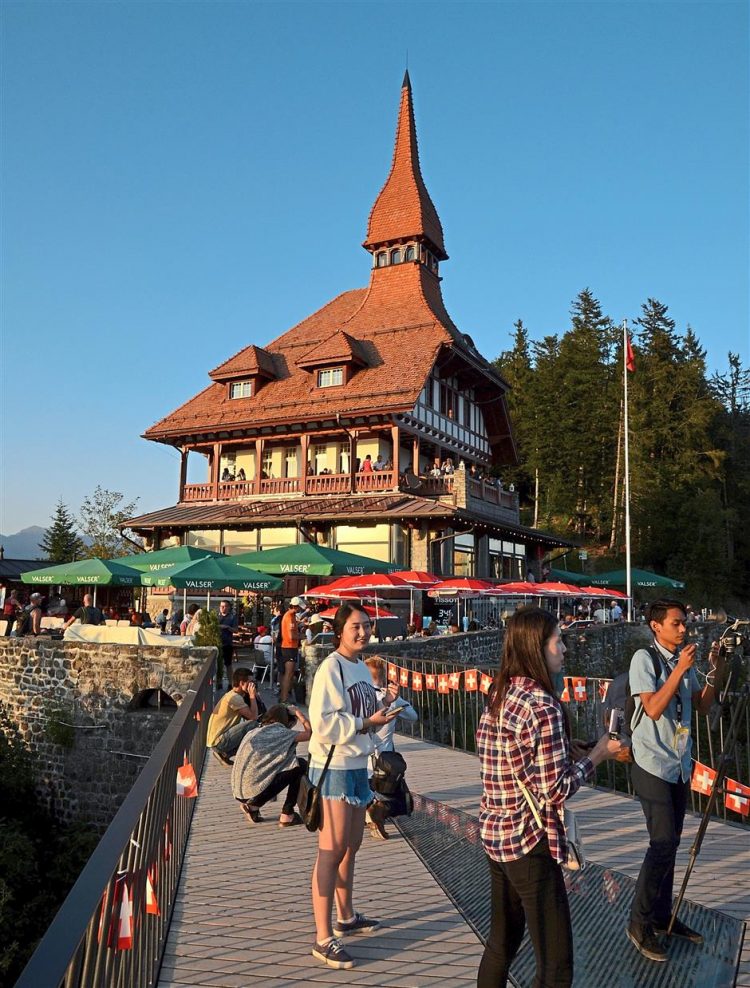 The odd-shaped traditional structure of a restaurant atop Harderkulm peak at Interlaken, with visitors trying to snap shots of the Bernese Alps from the wood- and glass-floored observation deck. 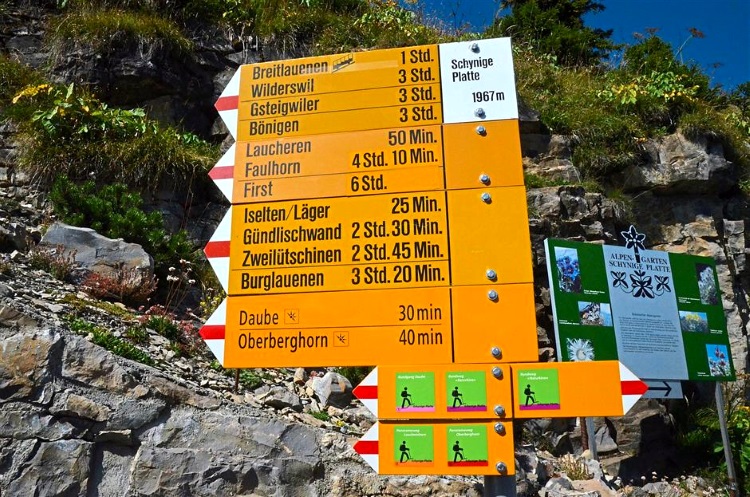 In hiking terms, the white tips with red bands in the middle signify that these trails are all mountain trails, no surprise since this picture was taken at Schynigge Platte, and those interested in assaying the trail must be surefooted with a head for heights, physically fit and aware of mountain hiking dangers. Having the correct equipment and map for your intended trail also helps. A lot. Std means hour.

Sports enthusiasts can also choose from sledging, skiing or snowboarding at the Snow Fun Park (which is not included in the ticket).

With many tour groups leading into Jungsfraujoch, the place can get a little crowded at times, especially when the driving winds add to the chill factor, and it becomes preferable to stay indoors for the warmth.

As Jungfrau Railway’s CEO Urs Kessler was giving the NBA star a tour of Jungfraujoch, we got glimpses of the other attractions, such as the Lindt Chocolate Heaven and a walk-in multimedia presentation of the Jungfrau-Aletsch area.

Down on the Aletsch glacier itself where the basketball court had been built, sunglasses and even sunblock is a necessity as the sun’s glare off the snow and driving winds can damage the skin.

After the short exhibition match and interviews, it was the media’s turn to play ball on the court, at 3,545m above sea-level!

On my last day in Switzerland, I managed to book a tandem paraglide session with one of the many adventure companies operating in Interlaken.

We – three of us tourists and four paragliding pilots – started out at 7.30am, going early as the weather forecast for later that morning was not promising. All of us piled into a transit van and drove up to Beatenberg village.

Olivier, who had started out learning the carpenter’s trade, decided to take up paragliding professionally after a birthday gift from his then-girlfriend. 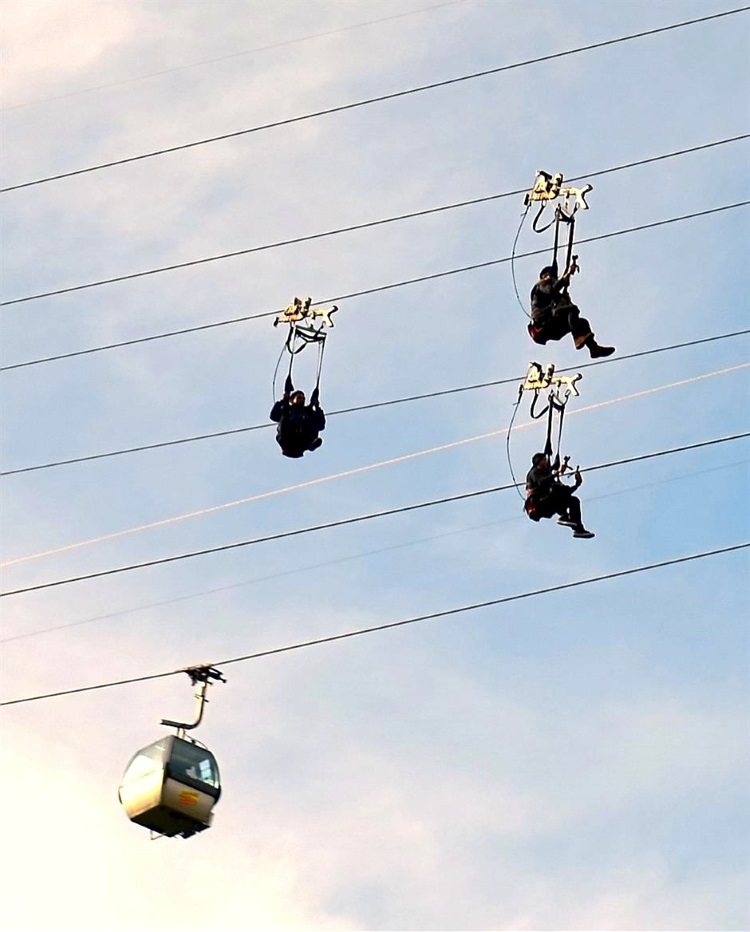 Thrill-seekers on the First Flyer appear to race against the Grindelwald-bound cable cars. 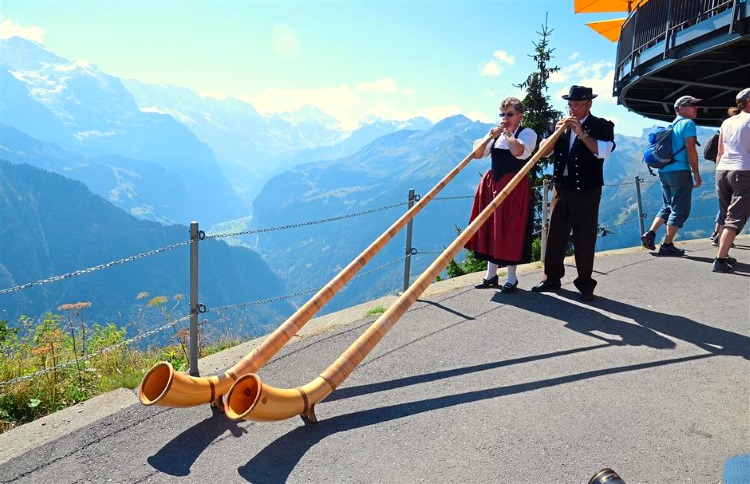 Laying out the wing on the cliffside, the instructions were simple.

“When I say run, you continue running – and don’t stop just because you can’t feel the ground anymore. I’ll let you know when you can settle into the harness,” said Olivier.

Gliding over Interlaken, this was one of those “unfolding vista” moments, where you see the pine forests unfurl beneath your dangling legs, while the pilot occasionally uses his Go-Pro on a stick to take shots of you from various angles in the paragliding harness.

The panoramic view of the Thun and Brienz lakes are suddenly interrupted as the pilot pulls the wing into a series of acrobatic moves and you can’t decide whether it would be more comforting to know the physics behind the paragliding wing remaining inflated despite being upside-down. 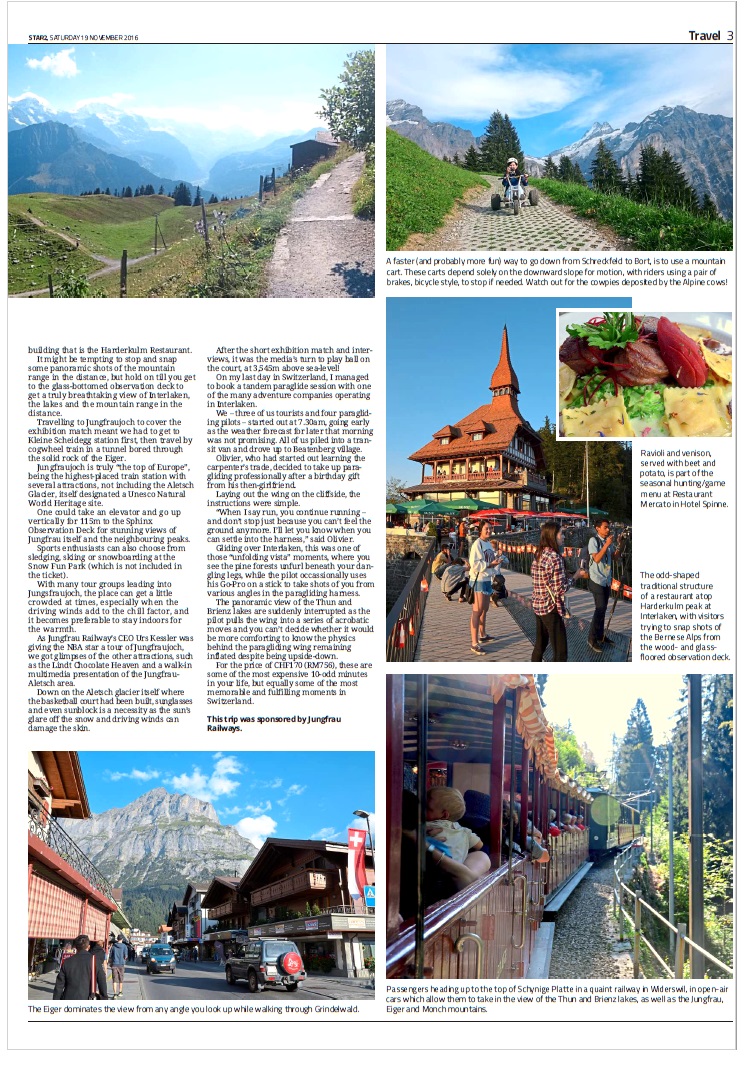