Thank you for being late!?

Thank you for being late!? 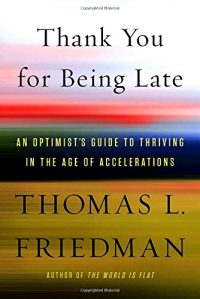 When I browse in Taipei’s Eslite bookstore, I’m often attracted by the books placed prominently at the “recommendations” rack. And this 460 page hard-cover title “Thank you for being late” had me startled. Well, I thought for a moment wondering what the author tried to mean. I do wish that I could use this phrase on my tour groups. Is it possible? On the contrary, the tour leader or tour guide is often tasked with the responsibility to ensure every member in the tour group is on time. In fact, it is not possible to use “Thank you for being late” in a tour, it will be rather embarrassing. Well, I’m just curious over Thomas L. Firedman’s intent.

Further analysing the meaning of this phrase: You are late and yet I have to thank you? It seems this can only come from those with high EQ. From the author’s profile, he is a three times Pulitzer Prize winner and a New York Times columnist. His column in the New York Times is translated into 100 languages, published in 70 newspapers, magazines and online media around the world. And being such a well-known author, why would he thank others for being late? As we all know, Chua Lam is also an advocator of punctuality. Regardless of whether going for an appointment or waiting for someone, Chua Lam is not going late and not even going to thank the late comer. Perhaps the contents of Thomas Friedman’s book is has nothing to do with the title. At least, I thought so. Anyway, I still bought the book.

We are often angry when we say “you are late and wasted our precious time”. On the other hand, we earned some “me” time while we are waiting. Due to the late comer, we might have found some little extra time to ponder over our future, to enjoy the surrounding ambience, to listen to the sounds of nature or to drift into meditation. Indeed, “late moments” referred by Thomas Friedman has this meaning. Even if all the occurrence and evolution of today are taken for granted, it eventually creates the sense of fear and imbalance. On top of that scientific and technological innovation has advanced relentlessly to the extent of environmental damage and corruption. It seems so related to the survival of mankind. But what does it matter? The normal people simply do not bother. Now what concerns us is that in many countries the fate of the nation lies in a group of people with “political agenda”. So much so that general elections does not result in real democracy and good governance. Finally, the people’s happiness and future is lost.

Then I have to thank you for being late, that gives me this “moment” to imagine the world’s happenings. Will AI take away my job? Will the US withdrawal from the Paris Climate Agreement aggravates the climate change and cause a catastrophe? Where should I go from here? Still not to worry? In fact, when someone is late, the tour guide gains a space of time to interact and build relationship with other members. Hence, when the late comer arrives, you can proudly say “Thank you for being late”!
“Thank you for being late” is an optimist thought for us to spare a moment for fruitful thinking. On the other hand, “Sorry you are late” is a stern warning. When the economist expressed to Taiwan “Sorry you are late”, it means Taiwan has missed the road to advancement. Looking back 18 or 28 years ago, Taiwan was the ultimate study grounds for Chinese students from Southeast Asia and was the leader in semiconductor industry. However, the current unstable political situation has caused a dent in Taiwan losing out the lead in technology and brain drain. When Taiwan resorts to relying on the US, align with Japan and deserting China, is that a forced decision or fate?

“Sorry you are late” is unreservedly a warning to Malaysia. Compared to our neighouring countries, are we still self-praising our transit system as world class? With such a leadership we do not only stopped progressing, we are in fact going backwards. From our top leaders to our lowest officials, has anyone been serious about preserving our tropical rainforest as our source of water? Why did the Malaysia-Singapore high-speed rail and the urban project Bandar Malaysia stalled? Why is the government always short of funds? Why is 1MDB unresolved?

Well, to attain the status of developed nation by 2020, I’d say sorry you won’t catch up.

Off we go, finally! – by leesan