The bumper durian season has reached its tail end, at least in Peninsular Malaysia. Thanks to this super season, which saw a glut in the supply of our favourite King of Fruits, prices came tumbling. 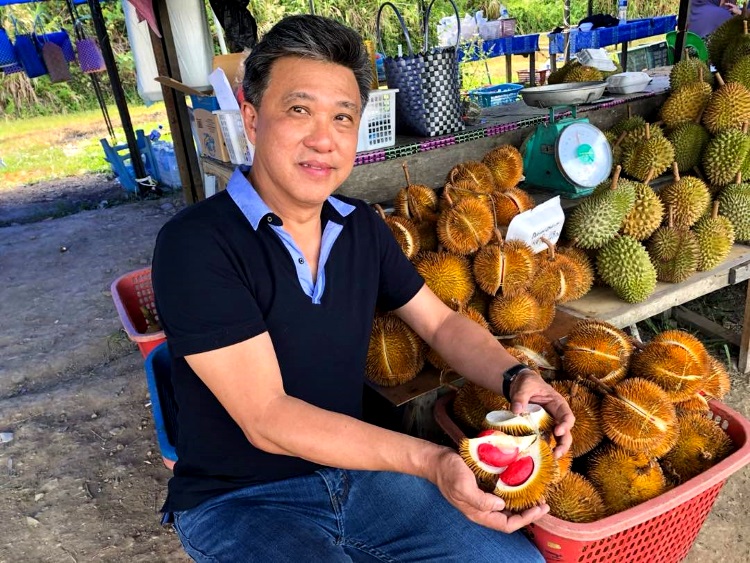 The flesh of the sukang, or red durian, has a beautiful colour.

The bumper durian season has reached its tail end, at least in Peninsular Malaysia. Thanks to this super season, which saw a glut in the supply of our favourite King of Fruits, prices came tumbling.

This season is simply the best in recent times. A combination of hot weather and regular rainfall resulted in this long durian season and the fruit’s oversupply.

Thorny delicacy
It was hard to refuse this thorny delicacy, especially with the variety available and the affordable prices.

A few extra inches have made home of my waist line, and I dread going for a medical test now because I have always had to grapple with my blood sugar levels. It’s anyone’s guess if I get a lecture or a pat on the back from the doctor.

From Musang King to D24 to Red Prawns to the relatively unknown Golden Phoenix or Kim Hong, I sampled them all this season.

I’ve been travelling to Sabah, one of my favourite states, for decades, but have never had the opportunity to taste its native fruit. The closest I’ve got to this unusual durian is through numerous pictures of them. With the season reaching its peak, I took a trip to the foothills of Mount Kinabalu recently in search of this unusual spiky fruit.

A two-hour trip from Kota Kinabalu took me up the winding roads of North Borneo to the quaint town of Kundasang in the Ranau district.

It reminded me very much of Cameron Highlands with its sprawling farm land of vegetables, and even strawberries, the key difference being the majestic view of the highest peak in Malaysia.

Simply a delight
Air-conditioning has little place here because the cool climate is simply a delight, a welcome relief from the sweltering heat currently baking the country. Against the backdrop of this breathtaking view, I began my search for the wild durians of Sabah, known by the Kadazandusun as the sukang (red) or dalit (red to orange flesh). 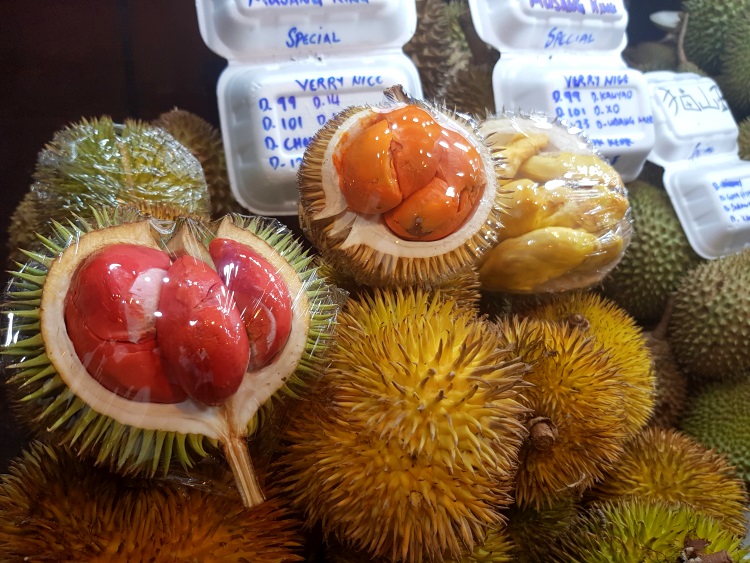 The sukang and dalit wild durians are endemic to Borneo.

Unlike the durians in the peninsula, which are mostly commercially cultivated, these wild durians are found in the more remote parts of the state and deep in the jungles.

But some farmers have started to cultivate them on a small scale because of demand from durian connoisseurs who readily pay top ringgit for them.

The red sukang, characterised by long and curved spikes, and the dalit (which morphs from white flowers to become roundish, orange fruits when ripe) with its short and sharp spines, can be sold at RM25 per kg. The more common and kampung varieties only fetch RM15 to RM20 per kg. 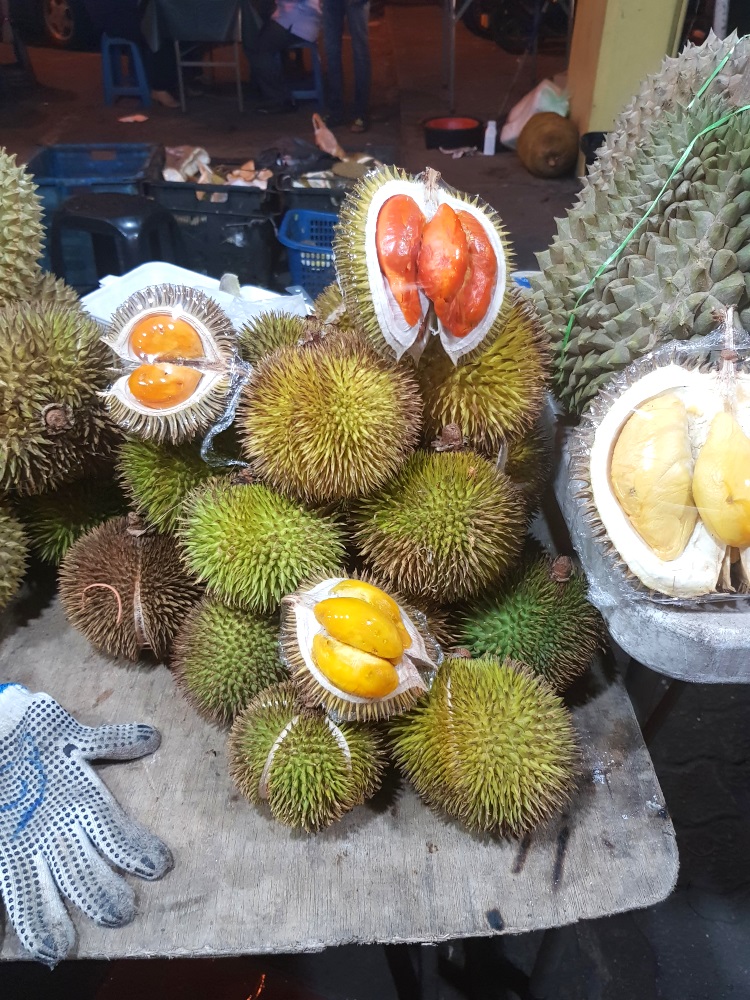 The dalit durian has short and sharp spines.

I’m certain tourists from the peninsula and those from China are paying anything between RM35 and RM55 per kg because of our naive behaviour of going weak in the knees and glowing with excitement at the mere sight of these novelty, sepak takraw ball-sized fruits. And from a mile off, vendors can identify weekend visitors from oil-rich Brunei, their car number plates a sure giveaway of their outstation origin and propensity to be fleeced. I’m not sure if they are still rolling in the dough these days, but they didn’t seem to be haggling with the durian sellers.

And here’s the point of this article – how do these wild durians rate against the smooth, buttery and creamy taste of Musang King or my favourite Golden Phoenix with its bitter sweet flesh, or the liquor-y taste of the XO durians?

I may not be the best person to rate them given my (poorly) hidden affection for Sabah and the obvious biasness that stems from it, but leaving prejudice behind, I gave them a shot anyway.

I found it hard to tune my taste buds to these indigenous fruits. Despite their colourful appearance, the taste was bland. Unlike the creamy durians that we are so accustomed to, the flesh of the red and orange durians is thin.

While others have claimed that wild durians have strong and distinctive scents, the ones I tried were odourless, reminding me of those from Thailand.

My experience was distinctly different, though. Perhaps I should have tried more of these wild durians to better assess them, but I had already struggled to finish three pieces. How was I going to manage more?

My Sabahan friends tell me these durians taste better in the fermented form of tempoyak, which is best served with rice mixed with salt and chilli. It was also interesting to learn that unlike ordinary durians, which fall off their tree when ripe, these wild ones normally ripen and split while still hanging in their tree.

As my red durian tasting tour came to an end – perhaps on a low note – my enthusiasm was reignited when I was told that my wild durian adventure had only just begun. Apparently, I should have entered the jungles in the centre of the Tongod district, where I would have found the oldest and tallest tree in Sabah, if not in Malaysia.

The tree in Kampung Kenang-Kenangan, measuring 57.7m, is believed to be over 100 years old, and according to legend, is able to produce up to 2,000 fruits a season.

The tiny district in Sandakan has a population of a mere 35,000 people, with Orang Sungai and Kadazandusun the predominant ethnic groups there.

If the statistics are anything to go by, there are likely more durians than people in Tongod when the season peaks.

From giant-size durian trees to durians that grow low on trees (just above ground level), it looks like my next destination would be to search for these unusual fruits in the deep jungles of Borneo.

The Kura-Kura or Tortoise Durian (Testudirium) is regarded an extremely rare durian of Borneo, and there is little information on this unique species. Naturally, this would make the hunt more tantalising for an off the beat trip, doesn’t it?

Despite their colourful appearance, the taste was bland.