As the island nation is prone to natural disasters, its people are well trained in disaster preparedness and have strong adaptive skills. What’s more is that rescue, cleanup, revitalisation are the standard operating procedures for the government of Japan. 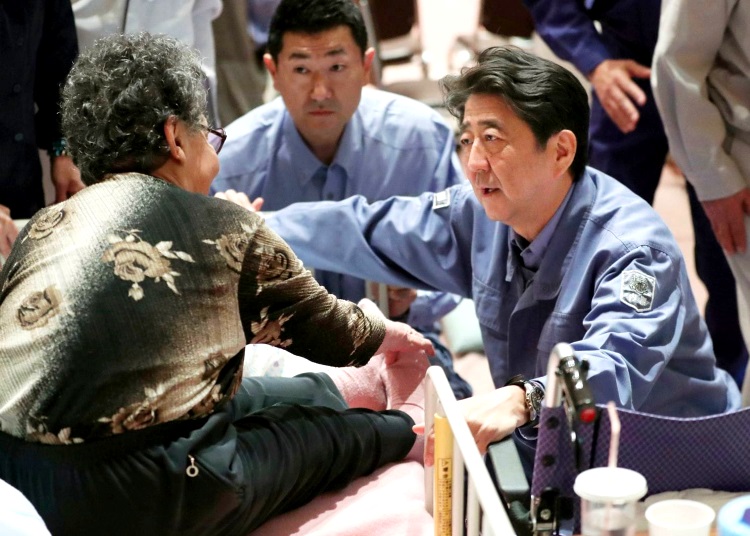 Japan’s Prime Minister Shinzo Abe, right, talks with an elderly woman at a shelter at the site of a landslide triggered by the Sept. 6, earthquake in Abira, Hokkaido, northern Japan.— AP

In line with that, the northern prefecture governor, Harumi Takahashi, has invited tourism pioneers to have a closed dialouge with her today. She has obtained full authority from Japan’s central government to reconstruct the prefecture’s economy, especially in the service industries.

In 30 days, super typhoon Jebi – the most powerful typhoon to hit Japan in 25 years, an earthquake measuring 6.6 MW and typhoon Trami all came down hard on Japan. Such natural environmental challenges are devastating. But as the island nation is prone to natural disasters, its people are well trained in disaster preparedness and have strong adaptive skills. What’s more is that rescue, cleanup, revitalisation are the standard operating procedures for the government of Japan.

I have great confidence in and admiration for Japan’s disaster management system. It was estimated that the devastated Kansai Airport would take seven days for repair work; but in just three days, Japanese Prime Minister Shinzo Abe announced that the domestic airport building and runway would reopen for service. Ditto the New Chitose Airport in Hokkaido.

Through all the unforeseen disasters that befell Japan, the world became witness to how the nation handled each crisis with great urgency, not chaos.

This has, in fact, enhanced the trust and peace of mind of the international community towards Japan as a nation. Providing assistance to foreign tourists in any typhoon or natural disaster is a top priority of the Japanese disaster relief policy – that is, to rescue foreigners first before saving their own families.

Out of more than 120 million inhabitants in the Japanese archipelago, many are well-trained in disaster relief work. They are trained in disaster preparedness and response through small group training at home, school, community and employment along with annual emergency drills.

The moment a real natural disaster happens, the Japanese will evacuate in an orderly manner, divert to shelters, dispatch relief supplies and take up their roles in voluntary organisations.

In 2011, during the 3/11 Tohoku Tsunami, in-line with its consensus to prioritise foreigners, the Japanese rescued thousands of Chinese exchange students.

Their families in mainland China were so touched by this gesture, and this went on to form a beautiful bridge for Sino-Japanese friendship.

In the year 2011, the total foreign tourists to Japan stood only at 6.2 million.

Tourist arrival in Japan has increased sharply since then, from 8.35 million in 2012 to 19.73 million in 2015. Japan unexpectedly became a Kanko Rikkoku or Tourism Nation.

Similarly Italy, Greece, Croatia, Thailand and Singapore have also turned into tourism nations, earning about 10% of their GDP from foreign exchange while 12% of their job market has emerged from the tourism industry.

For the past 25 years however, the declining birth rate and the aging population saw a downturn in the economy and deteriorating consumption. When Prime Minister Abe took office for the second time, he realised the need to push forward with the “National Income-doubling Plan”.

But how to go about it? The Constitution of Japan didn’t allow for the increase in the labour force through naturalisation of foreigners. Experts proposed the introduction of a Kanko Rikkoku policy to attract foreign tourists with consumption power to come to Japan as “short-term immigrants” who spend their money on eating, staying and shopping.

After some serious consideration, Japan abolished the tourist visa for visitors from third-world countries from 2015 and exempted the 8% consumption tax on purchases by tourists. Under various favourablecircumstances, the tourist figures increased to 28.69 million in 2017. In the first seven months of this year, it reached 18.73 million and very soon it will hit the 30 million mark!

Taking advantage of the momentum and the expectation of the 2020 Tokyo Olympics, Japan has set an ambitious target of 40 million inbound tourists! With the “can do” attitude of the Japanese – selflessness, courtesy, compassion, a sense of responsibility and patriotic spirit – this national target is very achievable.

Back home, in a recent interview, Tun Dr.Mahathir emphasized that tourism is a cash industry that can boost the economy and directly contribute towards the national treasury.

He did not, however, elaborate on how to enhance the industry today. I hope the ministers of tourism, home affairs and transport
will learn from our neighbours like Japan, and will listen to feedback from tourists in our country so that we can someday become a tourism nation too.

Call of the Kinabatangan — by Leesan