首页 / Off The Beat / Off The Beat: Up close with the Rafflesia, the largest and smelliest flower on Earth
Facebook
Twitter
Google+

Up close with the Rafflesia, the largest and smelliest flower on Earth

You’d have to be like Indiana Jones and hack your way through a thick jungle if you want to find the rafflesia – and even then, this beautiful flower doesn’t just grow on trees, because it literally sprouts from the ground.There is no such thing as a blooming season for the rafflesia, or even a designated area where you would find the flower. And even if you’re lucky enough to stumble upon one, it would probably disappear in a week!

In theory, this giant flower is said to be found in abundance in the rainforests of South-East Asia,but in reality, it can be quite elusive.

I have heard that rafflesias can be found at the Belum-Temenggor Forest Reserve in Perak, a 117,000ha park on the northern shore of Temenggor Lake, one of the world’s oldest rainforests. But no one can tell me exactly where its location is because it is a tightly-guarded secret to keep away unwanted intruders.

Word has it that the flower can be found at the Tambunan Rafflesia Reserve in Sabah, but again there’s no guarantee you’ll actually see one if you visit.

Although challenging, it is not however, impossible to find the flower in bloom. 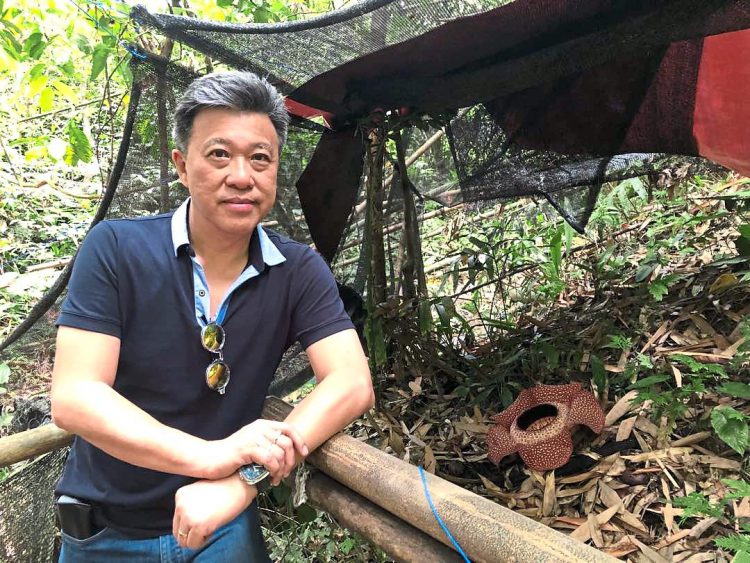 Rafflesias are parasites which grow on only one type of vine, and despite their beauty, they emit the smell of rotting meat to attract insects which pollinate the plant. The flower’s life span is short – it only stays alive for a week. That means anyone hoping to see the flower has to reach it quickly once they hear news of it flowering.

Poring, a tourist area in Sabah, located 40km away from the Kinabalu Park Office in the Ranau district, has earned a reputation for being the best place to view these flowers.

There are a few lucky land owners who have had rafflesias bloom in their backyard. Whenever these flowers start to bloom, the locals place announcement banners on the roadside to attract tourists.

Not too long ago, my colleague Muguntan Vanar, from Star Media Group’s Sabah bureau, gave me a call late one evening.

“If you want to see the rafflesia, I think you’d better fly over here immediately. It’s already Day Three and it will be gone soon. Go to Ranau or Kundasang, and look for Poring, you will be able to find them there. Good luck!” he said pretty dramatically.

Kundasang, located about 6km away from Kinabalu National Park and 12km from Ranau town, is renowned for its vegetable market which is open seven days a week. It offers the best views of majestic Mount Kinabalu, and is certainly one of the most beautiful places in Malaysia; its cool weather is similar to that of Cameron Highlands.

I’m 57 and I still hadn’t seen a rafflesia, which grows in our country’s own backyard. It has always been on my bucket list and I was eager to tick it off, so I decided to fly to Kota Kinabalu immediately, and began a three-hour adventure driving up the hilly route to Ranau at the break of dawn.

It was not difficult finding the farm in Poring as there was already a banner erected to announce the flower, and a small group of tourists was queuing up to pay the RM20 entrance fee, and to register themselves in a logbook.

Yes, for these lucky villagers, each time a flower blooms, this spells a little extra income! 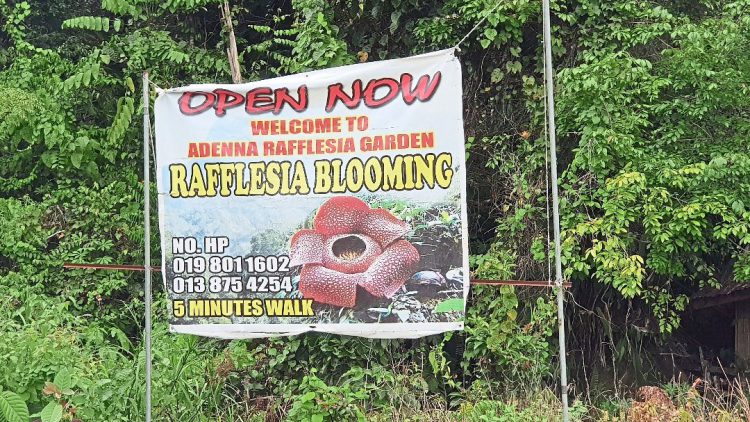 Rafflesia is the biggest tropical flower in the world. Photo: Wong Chun Wai

We walked through what looked like a trail going to someone’s backyard orchard. It was a nice walk, and along the way, I saw fruit trees including durian and rambutan but there were no fruits as it was not the season.

Then up ahead, sheltered by tall trees and protected by a small fence, the rafflesia greeted us.

It was smaller than I had expected but nevertheless, it was not a disappointment, and we took turns taking photographs.

I could not tell if it was three days old or already dying, as my wife claimed, but I wasn’t going to let that spoil the occasion. I had come all the way to look at it, smell it and yes, take a selfie with this legendary flower of the Bornean jungles.

It didn’t look at all like the world’s heaviest flower. It can, after all, reach up to 10kg, and even 100cm in diameter, according to reports. 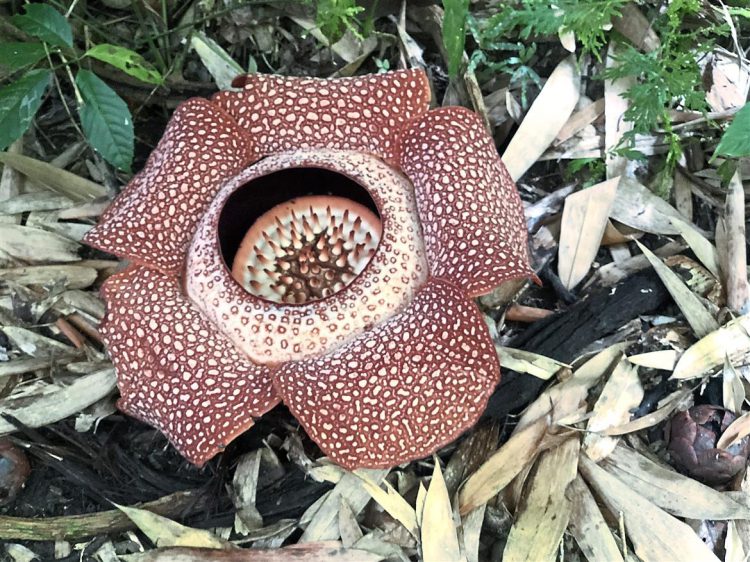 The rafflesia can reach up to 10kg, and even 100cm in diameter.

Nonetheless, I was grateful and thankful that I had joined the ranks of Sir Thomas Stamford Raffles – founder of Singapore, and the man who discovered the flower during an expedition in 1818.

It is said that rafflesia is one of the world’s rarest flowers for good reason: nearly perfect conditions must exist for a rafflesia to bloom.

“To make matters more difficult, rafflesia flowers are unisex and are usually found within range of the same sex. Insects not only have to carry pollen to another rafflesia, they must take it to the opposite sex and do so within the brief flowering window of three to five days,” according to travel writer Gregory Rodgers on online travel guide Trip Savvy.

Not satisfied with just one visit to that farm, I decided to look for another villager, who had also put up a banner to announce the arrival of the rafflesia. I showed him the pictures on my phone, and asked if his flower was as big, but the honest farmer said his could not match the one I had seen, and asked me to return in next few days.

He did not have the heart to rip me off, and I thought that was pretty decent of him.

All said, my trip had been worth it, as I can now say that I have seen this elusive flower. It is a pity if you, my fellow Malaysians, have not yet stepped foot in Sabah, which happens to be my favourite destination, next to my hometown of Penang. When you do go, I hope you get a chance to see the rare rafflesia for yourself.