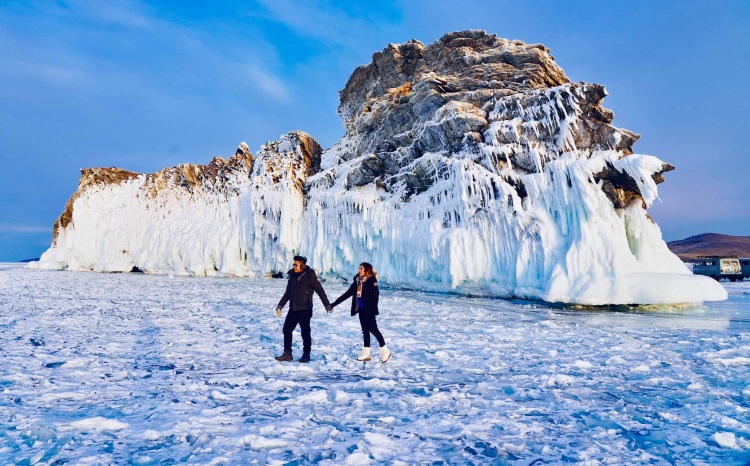 I wasn’t good in both Maths and Science subjects in school. I recall one infuriating teacher threatening to banish me to Timbuktu or Siberia, as punishment. At that point, as a squirming student, I had no idea where these strange-sounding places were, but they certainly sounded far.

Indeed, they were far and isolated when I later looked them up on the world map. One is in Mali and the other in modern Russia.

But thanks to the teacher, those two places stuck in my mind, particularly Siberia. While Maths had no place in my realms of interest, Literature certainly did.

As a teenager, I buried myself in the works of Aleksandr Isayevich Solzhenitsyn, the great Russian novelist and historian.

I read many of his books, which allowed me to better understand the hardship of dissidents who were cruelly sent off to the Gulag forced labour camp in freezing Siberia.

By the time I finished his series of books on these cruel places, I had planned to see for myself what Siberia would be like. 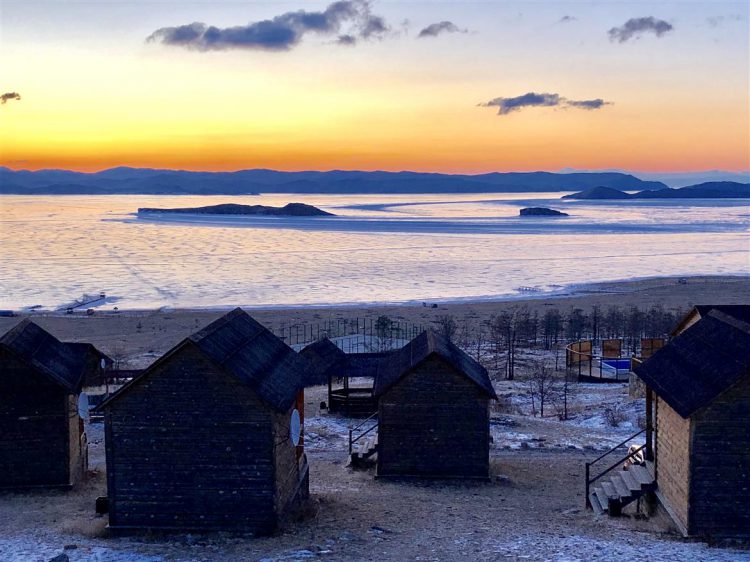 In the 19th century, a million convicts were sentenced to hard labour and banished to these punishing places, many with their families in tow.

As I became a young adult, Euro disco sensation Boney M entered my life, singing about Rasputin. According to the song, he was Russia’s greatest love machine.

And when I looked up the character depicted, I learnt that it was Grigori Rasputin, a Russian mystic and self-proclaimed prophet who befriended the family of Tsar Nicholas II, the last monarch. And yes, Rasputin was Siberian!

Fast forward to 2019 – the Chinese New Year seasonal heatwave did enough for me to pack my bags and head for ice-cold Siberia. To be more precise, the blue ice of Lake Baikal in south eastern Siberia.

Thanks to modern transportation, Siberia is no longer a great distance. In fact, my connecting flight from Bangkok to Irkutsk only took six hours. The time zone between the capital of Siberia and Kuala Lumpur is the same, too.

Having lost interest in cities and their flaky man-made tourist traps, Siberia was a natural step in my growing interest for off-the-beaten-path adventures.

Besides the promise of endless supply of vodka by my tour operator, Leesan, I needed no other convincing because Lake Baikal is one of the world’s great natural wonders.

It’s the world’s largest freshwater lake in terms of volume, and the oldest at 25 million years. It is also the deepest, at 1,700m. 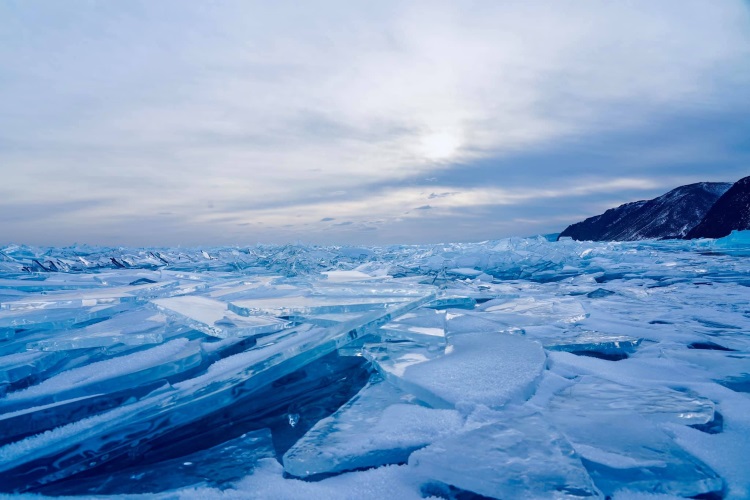 Lake Baikal is one of the worlds great natural wonders. Photo: Cliff Lai

With a surface area bigger than Belgium – and many times bigger than Singapore – it contains nearly one quarter of all the world’s freshwater, which is approximately equivalent to all five of the North American Great Lakes combined.

“The Earth’s deepest inland body of water and its massive stone basin is so large that all of the rivers on the planet would take an entire year to fill it.

“While more than 300 rivers flow in, only one – the Angara – flows out, eventually draining into the Arctic Ocean, hundreds of kilometres to the north,” CNN Travel reported.

But there was another persuasive reason why I wanted to see Lake Baikal. Like in many other places, human-induced climate change is taking its toll on this spectacular body of water.

The lake itself has become warmer – even though as a first-time visitor from the tropics, I couldn’t tell – and seasonal ice is present for a shorter time and is thinner these days. Its water is also stratified for longer periods, says a report. 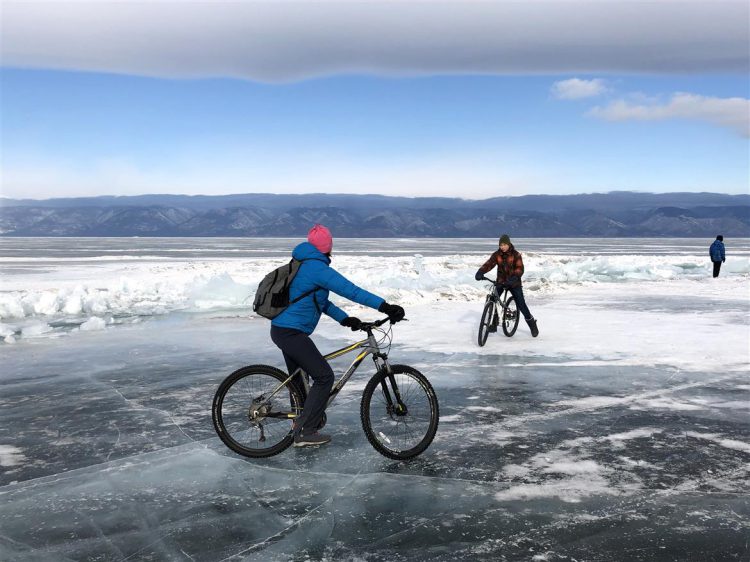 Dont have a car? No worries, just rent some special bicycle to ride around Lake Baikal. Photo: Wong Chun Wai

If you live long enough to see it, Lake Baikal could be a warmer experience, a time when rainfall will also be more prevalent.

But now, it’s still mind-boggling to see this massive snowy landscape turn into a highway, with vans zooming across the frozen lake. The thickness of the ice on Lake Baikal varies from 70cm to 150cm (60cm of ice can already withstand 10 tons of weight).

There was another first for me – I have neither seen nor travelled in a UAZ (Ulyanovsky Avtomobilny Zavod), a Russi•an m•ilitary off-road automobile. I was told that I would be on a four-wheel drive, but this strange-looking armoured vehicle was something else.

The robust vehicle made the expedition over the sub-zero frozen lake that much more of an adventure. 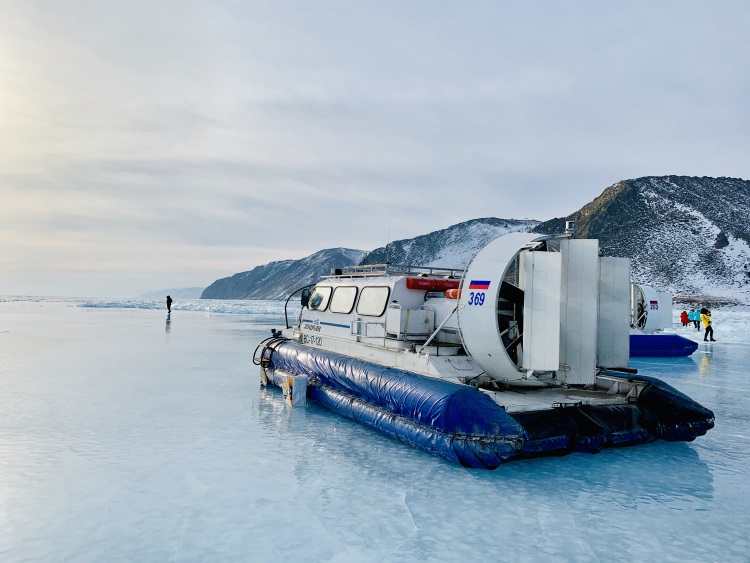 This vehicle helps you glide around the icy lake. Photo: Leesan

With plenty of sharp, protruding ice blocks on the surface, my Buryat driver expertly navigated across the lake, though that didn’t stop us from being thrown around when we hit some bumpy stretches.

Like most Russians, he barely knew how to smile. The Bruce Lee and Visit Hong Kong magnets on his car made the over-sized Buryat look like an MMA fighter. His stoicism and inability to speak English convinced me to avoid small talk, and instead, leave him to just drive over the lake.

Buryats, numbering about 500,000 in Russia, are of Mongol stock, and the largest indigenous group in Siberia. Irkutsk, in fact, is only about 500km away from Ulaanbaatar, the capital of Mongolia.

The only time he spoke was through our guide, when he wanted us to know that there was a Buddhist stupa on Ogoy island on the lake, which we drove past. 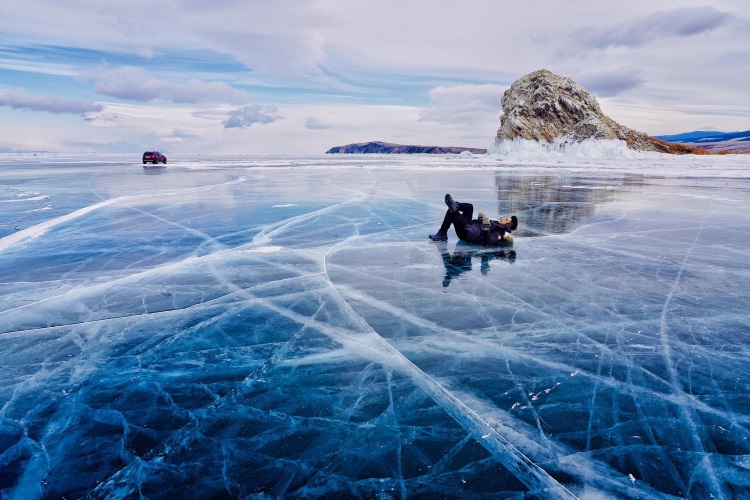 You will get your Instagram-worthy shot at Lake Baikal. Photo: Cliff Lai

My ignorance had led me to believe that Russians were just atheists or Orthodox Christians, but the Buryats were either Buddhists or animists.

When the rough ride finally came to an end, what greeted me was an incredible, out-of-this-world sight. Standing in front of me were giant turquoise spires of ice. These natural sculptures were so majestic and incredibly beautiful, simply beyond words.

“When the lake freezes during the winter, an amazing phenomenon takes place: large shards of transparent ice form on the surface of the lake, giving the amazing appearance of turquoise ice,” a report said.

The white-layered air bubbles on the ice – the result of methane gas produced by algae – and the lines of cracks are certainly Instagram-worthy. It’s simply nature creating art. The white-layered air bubbles on the ice are simply gorgeous. Photo: Cliff Lai The thickness of the ice is between 70cm and 150cm. Photo: Florence Teh

I also saw many beautiful ice formations on the islands we visited, which writer Chris Wright described as “remnants of high waves that crashed against the sides during early storms and frozen solid. They were weird and smooth and wonderful, shining in the late afternoon sun and dripping as they began to melt. Often, the bottom 20cm or so have thawed away, leaving them hanging above the ice.”

To the dissident prisoners who were sent to the Gulag, Siberia – 4,200km away from Moscow – this was a hell hole.

Ironically, Siberia is now becoming a tourist gem, with the magnificent Lake Baikal, its showcase.

At the airport, immigration and customs signs sport Chinese characters, the nation is well aware of the tourist dollars, or rubles, that could roll in. And at the spots I visited at Lake Baikal, the presence of the Chinese was obvious. 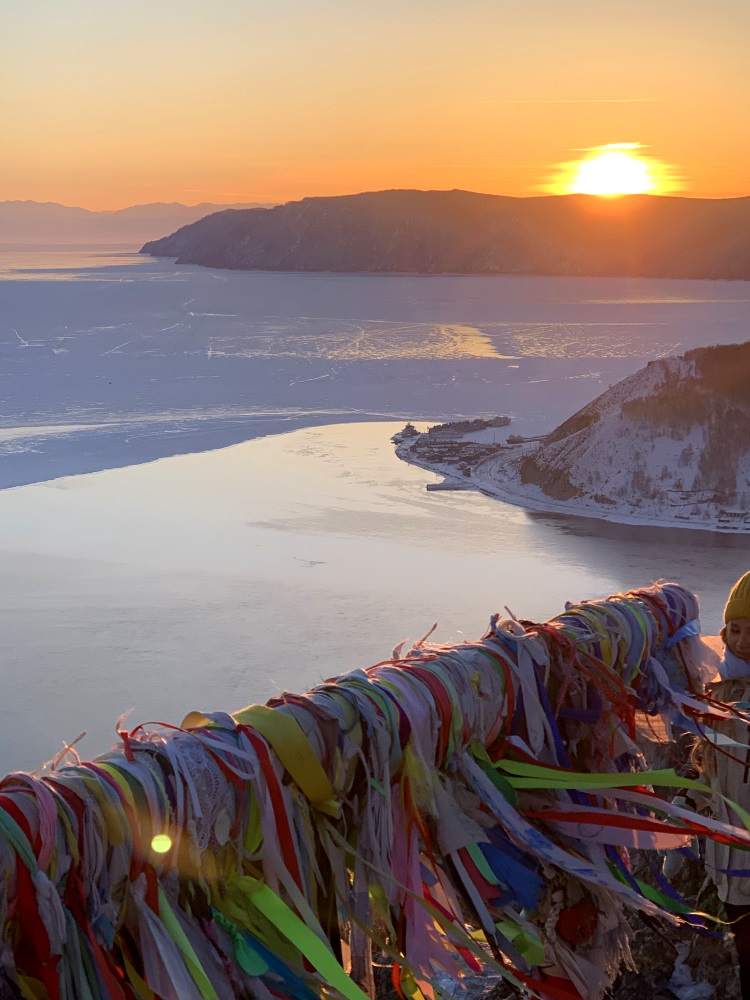 There are even Chinese restaurants in Irkutsk. Most of the hotels we stayed at had rice as part of the buffet, and on one occasion, even rice porridge was available for breakfast.

It came as no surprise to see many Thai tourists milling about, too, given the direct flight from Bangkok.

To share a travel tip: Visas are needed, but interestingly, no immigration forms required filling to enter Siberia.

In the final moments before my departure, I passed through streets named after familiar characters, including communist icons Lenin and Marx. However, Irkutsk is also known for naming its streets after Siberian writers including Zagoskin, Omulevskaya, Yadrinzev and Vaginskaya.

And of course, it’s time to get some of Valentin Rasputin’s works. Irkutsk was the home of this well-known Russian writer, and many of his novels and stories are set in the Angara River.

To my teacher who wanted to banish me to Siberia, I can only express my gratitude for putting the seed of the place in my head, which led me to read some of the greatest literary works, including those by Siberian writers.

No, Siberia isn’t that cold. In fact, a Russian classic in hand, a bottle of vodka by the side, and a window view of Lake Baikal is all you need to keep warm.

A trail of blue ice – Lake Baikal in Siberia, Russia is the largest freshwater lake in the world, in terms of volume.
In winter, it becomes completely frozen and turquoise ice spikes are formed, turning into a magical blue wonder. 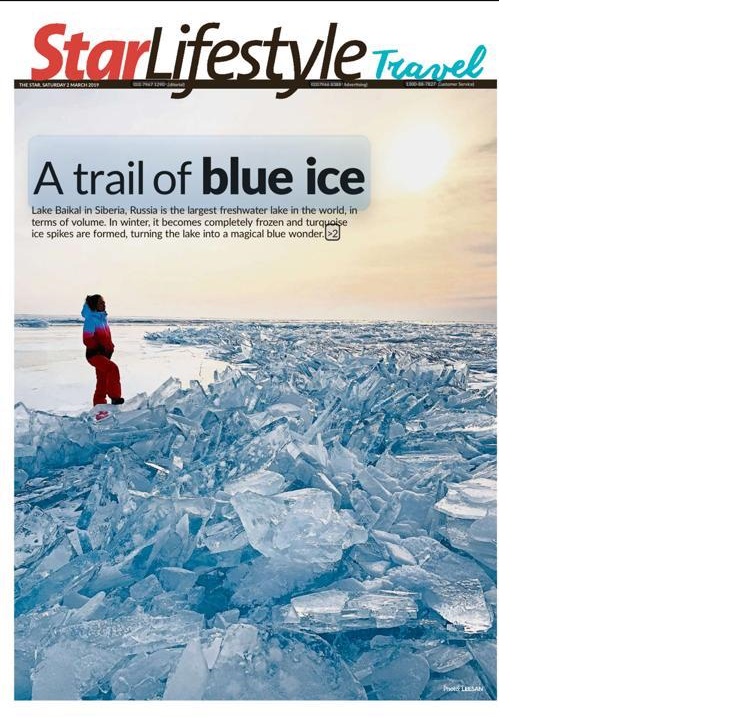 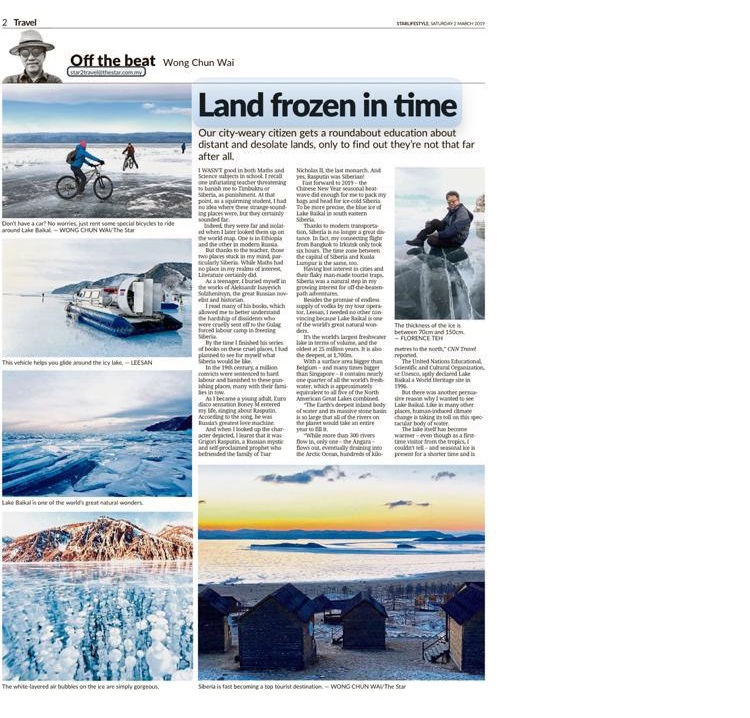