Into The Unknown — by Leesan

Revisiting the icy symphony that is Russia’s Lake Baikal It is -20°C and the wind in Russia’s Siberia blows away all warmth. Lake Baikal is frozen, yet it remains clear and icy blue in winter.

I’m partial to the cold wind on this barren ice lake though… perhaps it’s the vodka. In fact, Lake Baikal looks like she could use some vodka herself!

To get great views of the lake, just board a Khivus hovercraft. The extremely cold weather here is what makes this lake, which is the size of Taiwan or Belgium, freeze rapidly. As many as 27 small islands on the lake feature strange-looking ice sculptures; it’s as if they became frozen the moment they emerged from the water.

Just like how life is far from perfect, there are blemishes on the ice but those just make everything more interesting. The numerous fissures on the ice surface form irregular lines that make up beautiful patterns.

It is such a biting frost that make this freshwater lake of the size of Taiwan or Belgium rapidly solidify and freeze. 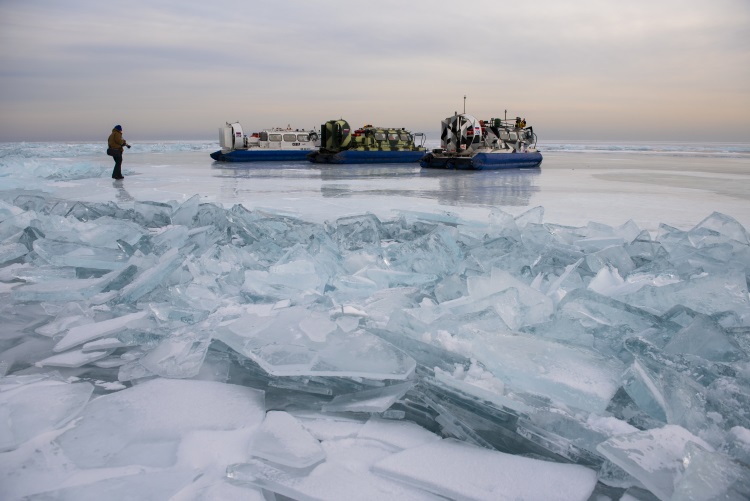 Also, the thick layer of ice (about 1m to 2m) traps air bubbles of various shapes and sizes. Some look like fluffy clouds, while others bear the shapes of mushrooms and flowers. The embellishments of life definitely require a lot of imagination. I can’t help but admire nature’s ingenuity, always bringing the most direct and true experience by surprise.

The place is so colourful – white, blue, green and even pink. Thankfully, my Android phone is able to capture all the colours and special moments in this brutal winter.

The scenery by the shores of Lake Baikal never gets boring. 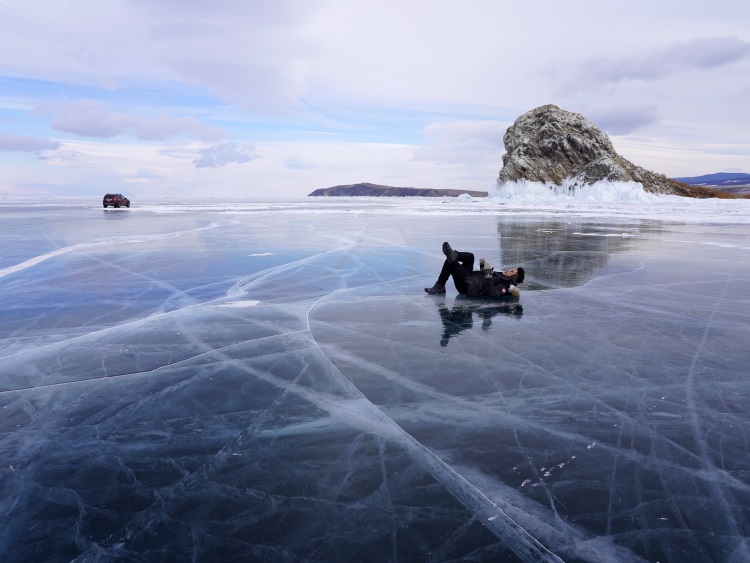 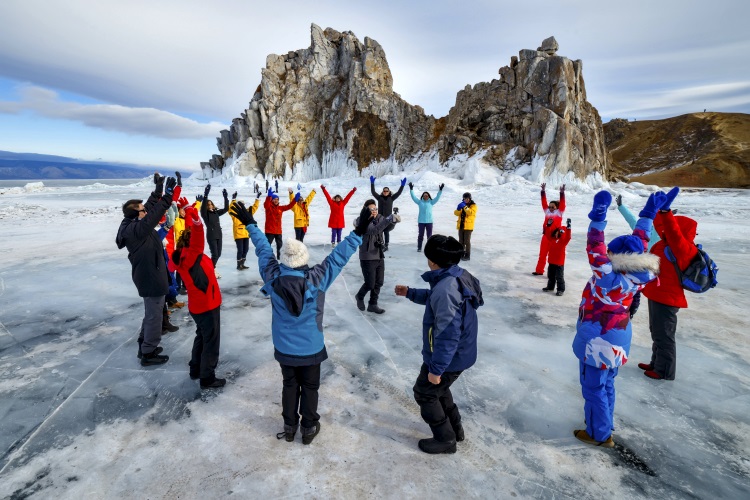 Lake Baikal only becomes fully frozen solid in February (sometimes it extends through April), where temperatures can reach as low as -50°C in Siberia. Siberia has a close relationship with the history of human evolution. For thousands of years, people have chosen to live on this natural habitat and are inter-dependent on the four seasons of Baikal, which is shaped like a crescent moon. The 500,000 Mongolic Russian Buryats near Lake Baikal are the most admirable people as they still keep to their ancient promise of keeping the lake safe.

I have seen Lake Baikal in autumn twice during my 9,288km journey on the Trans-Siberian Railway (the lake is at the 4,096km point). I wondered if that was where the diplomat Su Wu once herded sheep during the Western Han Dynasty some 2,200 years ago. I listened to Li Jian’s Baikal Lake song in autumn but I felt like I was missing something. I yearned for a rendezvous with the lake during winter.

Thankfully, I was able to return during winter. On the slopes of the only riverbank outlet, Listyanka, I gazed upon the non-frozen confluence of Lake Baikal and Angara River. I wonder why this 30m-wide area had not turned to ice. Our Russian guide, Natalia, is a geography teacher by profession so she explained the phenomenon to us.

The ice layer with a thickness of 1-2 meters traps bubbles of various shapes; looking like clouds, mushrooms, flowers, and hydrangeas… 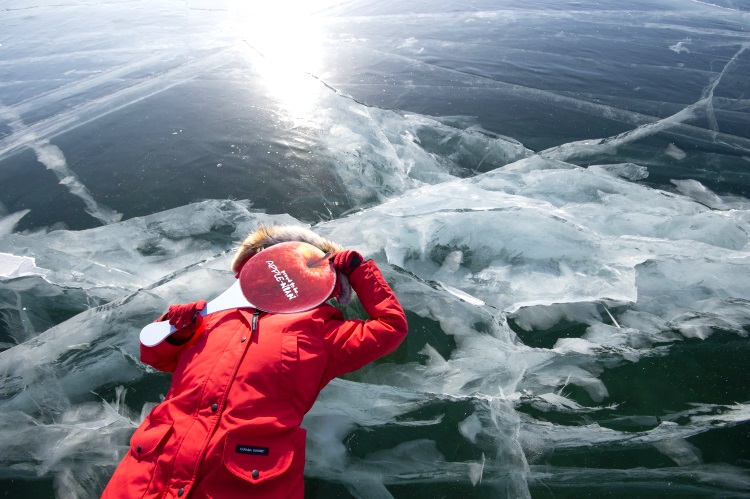 The writer playing it cool and calm on Lake Baikal. 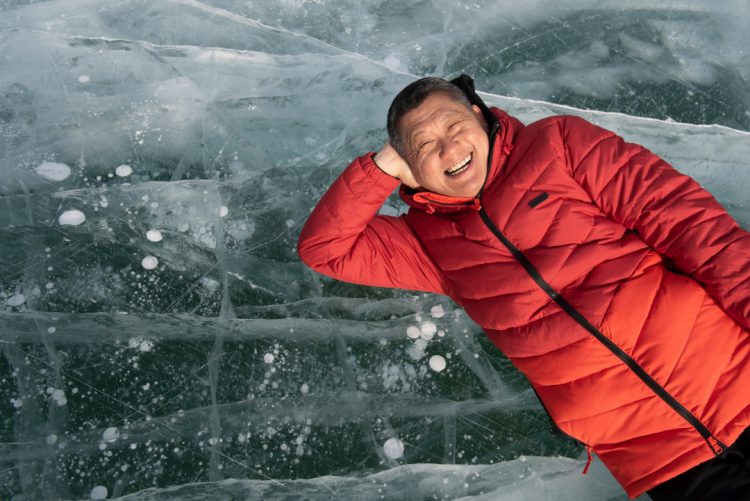 Natalia also told us how Lake Baikal came to be. According to her, 25 million years ago, between the Ice Age and Stone Age, the Earth’s continuous continental rifting, breaks and earthquakes somehow “forcefully” created this Siberian plate of mountains, rivers, lakes and more.

After listening to her stories, we piled onto a wind-powered hovercraft to explore the lake even further. The hovercraft glided 200km north gracefully like an ice-skater. The temperatures and landscapes kept changing as we moved. When we stopped, the Buryat driver pointed to a white tower on a mountain and said to us, “That is our faith, the Shaman Temple.” The Buryats are free-thinking folk who live on the boundless grasslands and are very hospitable.

an old, modified Soviet-style van that was able to move at ice-breaking speed. In the next 100km section of the lake, we hopped on to another automobile – an old, modified Soviet-style van that was able to move at ice-breaking speed. It was thrilling! And somehow, we never really had any fear of the ice crumbling below us…

We stopped again and this time, our Buryat driver cooked us a simple meal on the ice. He managed to whip us up a Baikal specialty: Omul fish soup. As we took a mouthful of the hot soup, our mouth did not burn as the biting cold helps cool things down quickly.

After another shot of vodka, I took off to happily roll around the ice!

Strolling on the icy Lake Baikal, having a closer view and photos of the pristine lake, the hillocks and the icy rocks… let’s also enjoy a lunch on the ice! Lake Baikal measures 636km from north to south and 20km to 80km, east to west. It is the world’s deepest lake with a depth of 1,646m. It is also the world’s largest freshwater lake, accounting for 25% of the Earth’s water storage.

There are 336 rivers flowing into the lake but it is drained through only one, the Angara River. There are 27 islands on the lake, with 1,850 creatures and 850 underwater plants.

The lake starts to freeze from January to April. In 1996, Lake Baikal was listed as a World Heritage Site.

The views expressed are entirely the writer’s own.
Published in STAR 2, 23 Nov 2019 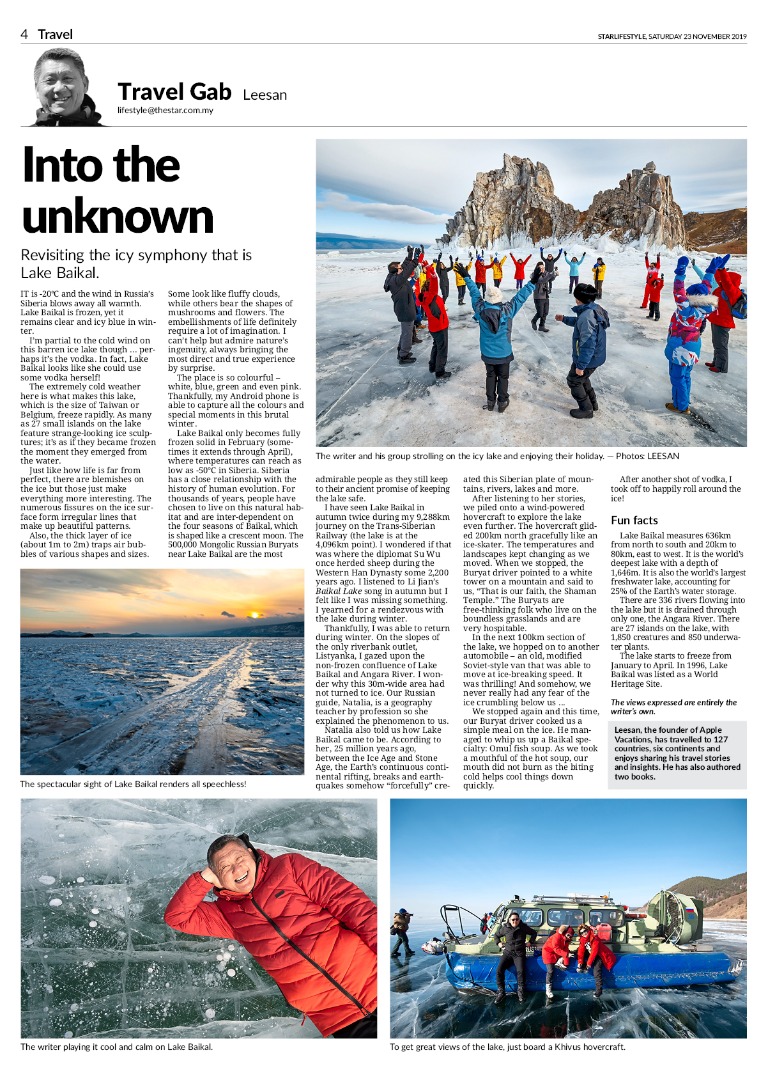