It’s October, a supposedly busy autumn travel season. Unfortunately the winter has come much too soon this year for much of the world. Or perhaps the winter is here to stay for the whole year? 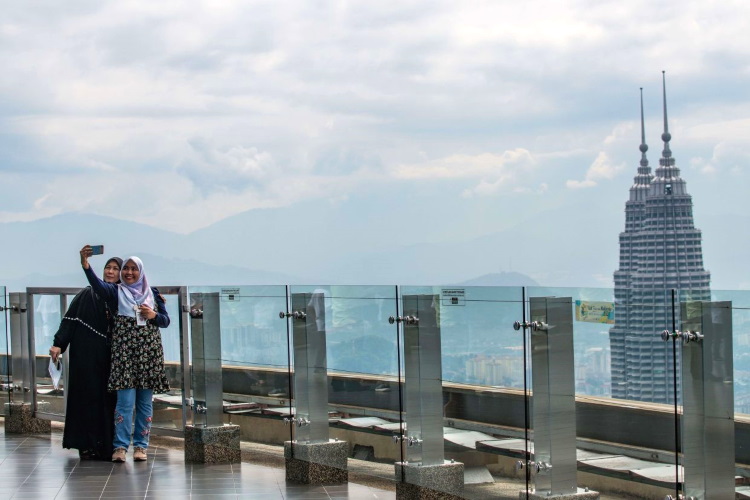 Women pose for a selfie, with the Petronas Twin Towers in the background,
from KL Tower in Kuala Lumpur on July 24, 2020. (Photo by Mohd RASFAN / AFP)

A personal take on surviving in the tourism industry

Well before Malaysia’s movement control order (MCO) began in March, between Jan 24 and March 17, China was the first country to initiate an extensive internal lockdown to deal with the Covid-19 pandemic, later sealing its borders as well. Many other countries soon followed, marking the start of the war against the virus for the travel fraternity worldwide.

Inbound travel operators (Malaysian companies catering to tourists coming into the country), tour bus companies, hotels, souvenir shops, restaurants, private theme parks, etc, were the first to take the blows. Office staff, tour guides and drivers were laid off and some companies simply shuttered their doors to stop haemorrhaging money. The three- to six-month unemployment assistance provided by the government came as a relief – but what about the hefty debts companies have on their shoulders?

Outbound travel agencies (Malaysian companies that arrange overseas tours) were even worse off. Many cancelled their spring peak season tours to minimise expenses and many had staff drawing zero salaries just to stay employed. Some were fortunate enough to reopen for business as MCO phases eased movement restrictions but others were forced to wind up or change lines.

What tour fees that had been paid were stuck with airline companies or as advance payments or used to pay staff salaries, bonuses and incentives early this year.

Of course, as they were unable to go on their overseas trips, customers invariably demanded refunds. On top of that, foreign ground arrangement agencies were demanding unsettled arrears from November through January.

What could we do? Only sit and wait. There was no way for us to escape our obligations and we couldn’t go after the virus for all this! Could we? All we could do was to defer payments for as long as possible.

Outbound tour operators know very well that hard-earned reputations are at stake if they do not handle things prudently. Thanks to continued support and understanding from loyal customers, we were fortunate enough to get through this first battle relatively safely.

March 18 to May 12, the 55-day first MCO period, marked the second round in the travel industry’s battle against the coronavirus. Some industry players began to sell durians or farm produce to sell online or became food delivery riders and what not just to be able to feed their families. As we reluctantly began exploring the pay cut option to survive this battle, we were fortunate to have loyal staff who understood the importance of holding on to very limited resources.

On May 13, the recovery MCO phase began, marking the third round of our battle, during which we had employees working two shifts of 11 days a month each as we struggled to survive.

Travel restrictions were eased domestically and there was talk of “green bubbles” and “green zones” internationally. But things didn’t look so good as we entered the month of August, with countries like Australia, Japan and South Korea seeing a second or third wave of Covid-19 infections. Borders remained closed and the green lane initiative died a premature death.

And so we entered a fourth round of battle and the company, like most in the industry, has had zero income for almost eight months at this stage. On Aug 11, sailing along the Kinabatangan River in Sandakan, Sabah, I shared my views about the coronavirus situation with 22 tour group members but found myself choking back tears before long, totally speechless. Indeed, this virus has battered the world on an unprecedented scale, far too deeply and for far too long!

We’ve had no choice but to put 36 of our 165 staff members on unpaid leave. I am well aware of what can happen when employees lose their jobs. How can we expect the paltry RM600 monthly aid for the following six months to be sufficient to keep families adequately fed? This is why we in the travel industry need to muster all our strength and keep going with innovative social media initiatives and fresh ideas for domestic travel – we cannot afford to let up on our efforts even for a brief moment.

On Aug 29, as expected, the prime minister announced that the recovery MCO phase will be extended to the end of the year. And since then, the Tourism Ministry has indicated that overseas travel and tourist arrivals will probably only be possible from June 2021 onwards, sending a chill running down the spines of tourism operators. There is a prospect of hundreds of thousands of travel industry workers being out of work. And the industry is still waiting patiently for the RM1bil emergency assistance that is supposed to come from the Tourism Ministry.

This, then, is the fifth round of battle that we cannot dodge. And we’re ready for it. Even if we’re eventually left with only a handful of soldiers in our army, we’ll fight till this war is won!