Palau has a land area of 460sq km and is made up of 340 islands and islets.
I can assure you that you will instantly fall in love with the place the moment you see it with your own eyes.

The jellyfish adventures
— by Leesan

The columnist managed to tick one of his travel bucket list items earlier this year on the island of Palau.

CAN’T imagine how anyone could be so calm while swimming around a bloom of jellyfish in the sea, but that experience has always been on my travel bucket list.

And one of the best places to do this is in Palau. 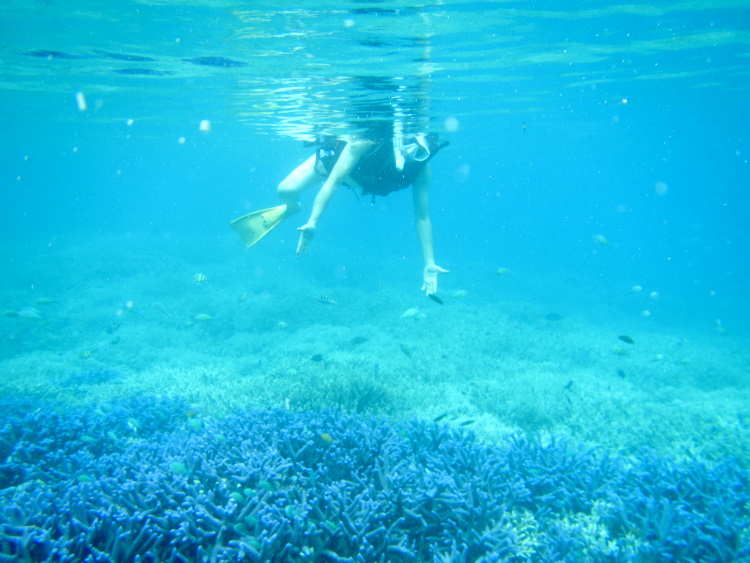 Do you dare to swim in the Jellyfish Lake? — Photos: LEESAN

When I was studying in Japan, my Japanese friends often said to me, “You have to bring your girlfriend scuba diving in Palau at least once in your lifetime.” They even told me that their diving experience in Palau was so great, it was like being in heaven. I thought that they were just exaggerating but still, I thought I would check it out myself.

A few months back, way before the pandemic hit us, I travelled to Palau with my tour group for some “vitamin sea”. We took a flight from Kuala Lumpur to Taipei, Taiwan and then from there we went on another two-and-a-half-hour flight to Palau. As soon as we landed, we were all ready to put on our bathing suits and hit the beach.

Palau is located in the south-west of the Pacific Ocean.

Geographically, it is close to the Philippines, but culturally, Palau is more Polynesian as it is linked to the Micronesian chain of the West Pacific. Palau has a land area of 460sq km and is made up of 340 islands and islets.

I can assure you that you will instantly fall in love with the place the moment you see it with your own eyes.

Palau has a population of only 21,000. There is no manufacturing, livestock farming or timber industry here. All there is in Palau is nature: azure blue sea, pristine beaches, and a marine paradise with colourful tropical fishes, coral reefs and millions of jellyfish. 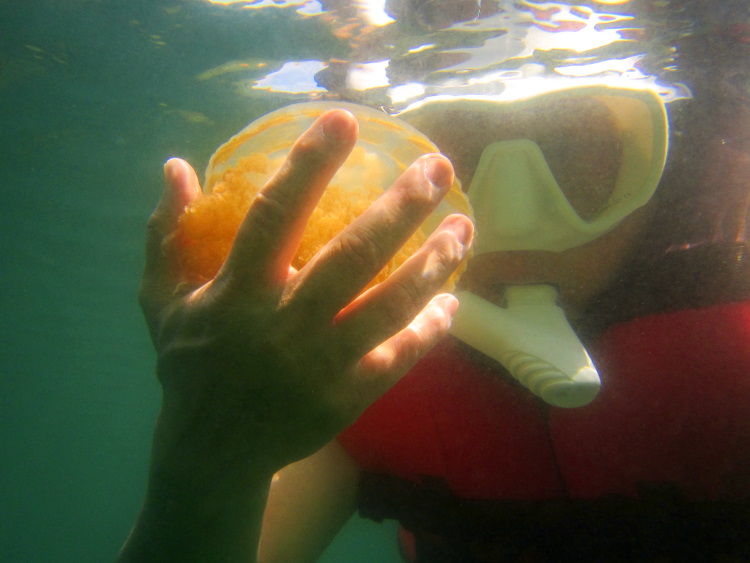 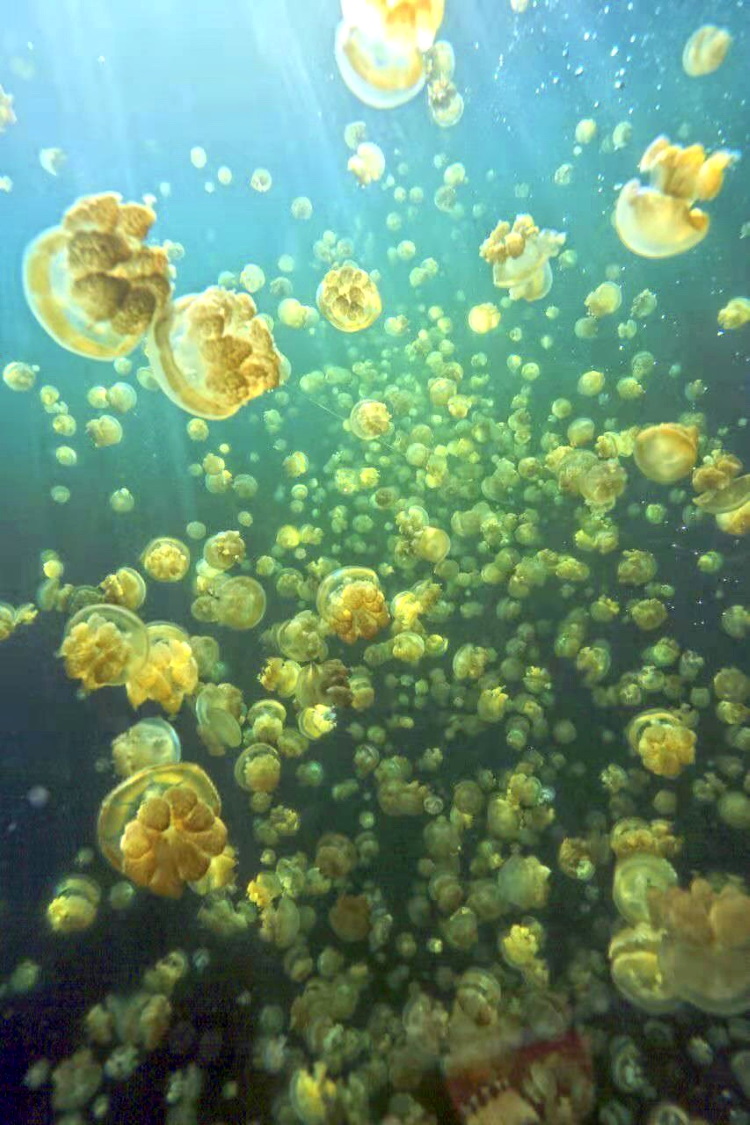 The five indigenous Polynesian groups here are avid ocean lovers, cheerful and optimistic but perhaps not so business savvy. They have leased their lands to outsiders, who then build resorts … The entrance to jelly fish lake 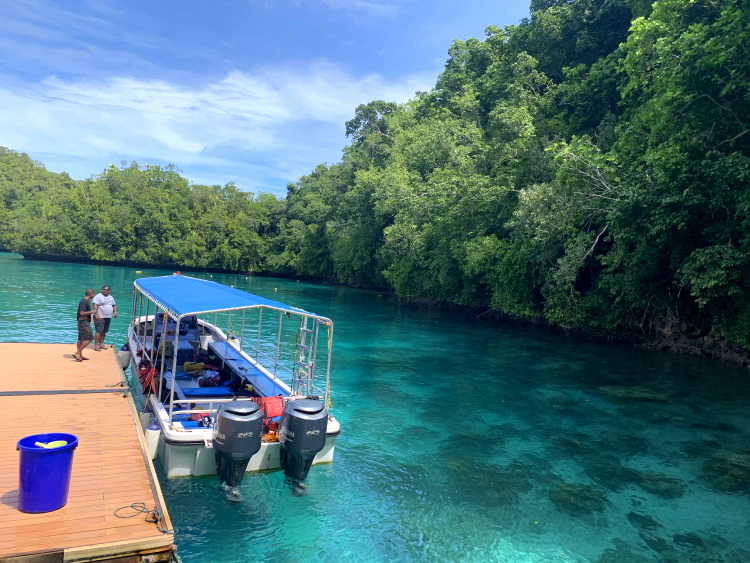 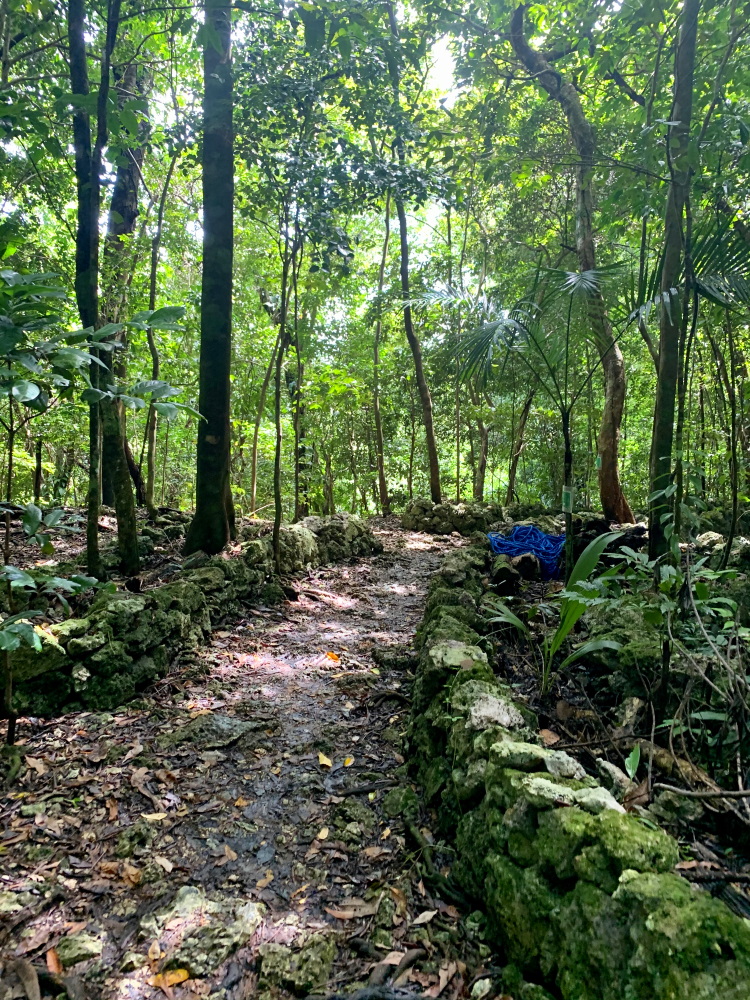 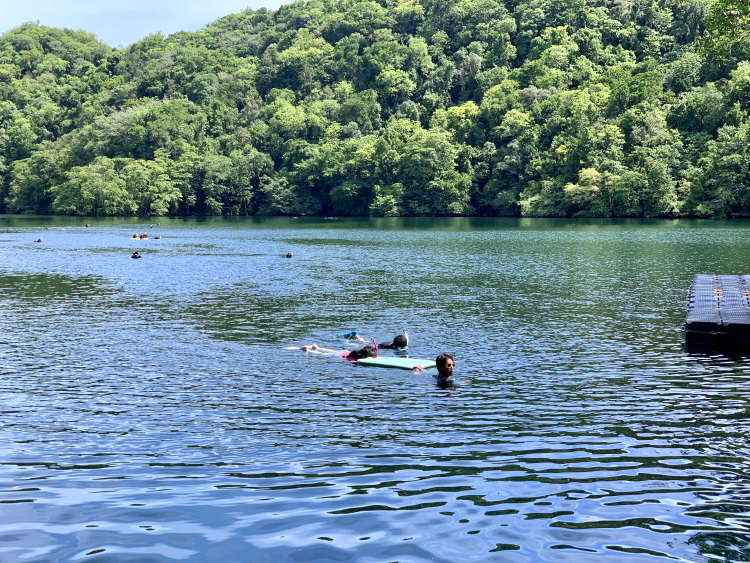 Midday is the best time to swim with the jellyfish

Palau’s capital and seat of administration is located on a more distant island of Melekelok, while the airport and most of the shops and budget hotels are found around Kolo island.

Palau has a world heritage status designated by Unesco, which has helped the island state’s tourism industry.

Visitors must pay the US$100 (RM415) “green fee” and departure tax, and this makes people think that it is not cheap to visit Palau. But the islands are only 800km east of the Philippines, and 2,048km from Sabah. So, it is still a much sought-after destination for international scuba divers and beach lovers.

You can go to many of the places around Palau without a problem as English is the official language. But since Taiwan and China tourists used to flock here by the droves previously (they were the biggest contributors to the island’s tourism industry), many local traders can now speak Mandarin too.

Diving in Palau is an experience you will not easily forget. 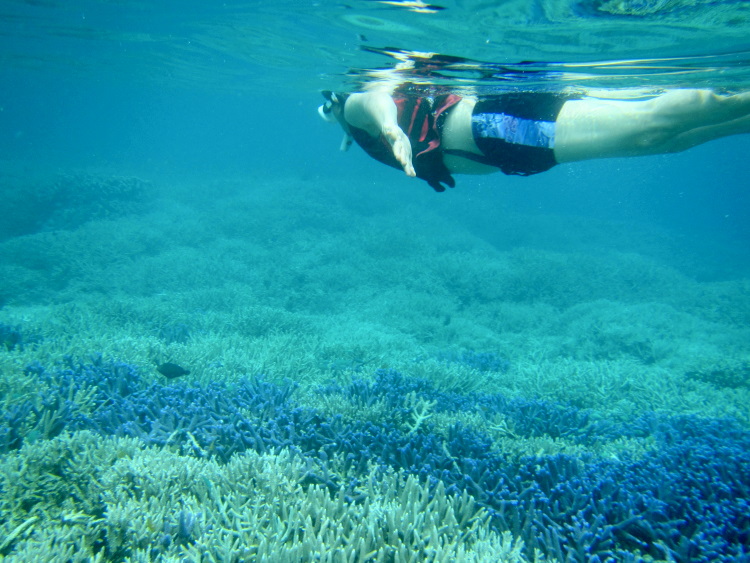 Ken, an ocean-loving Taiwanese tour guide, came to Palau with his young and energetic father several years ago to become eco guides here. Having considered that I might not have sufficient time to enjoy a hearty swim with the jellyfish, Ken decided to take me alone to a “precious lake” for this experience.

I asked him whether it was alright for me to swim naked, and he replied: “I’m sure the jellyfish would not want any artificial clothing to spoil the natural beauty in the water!”

Our speedboat darted towards the open sea. My eyes were fixed on the calm, crystal clear sea. I could see huge swathes of multi-coloured coral reefs swaying graciously in the ocean stream, so breathtakingly beautiful. It is hard to imagine that this place used to be one of the sea routes that had suffered tremendously during WWII.

The unique, non-poisonous jellyfish lake is nestled on the Eil Malk rock islet between the islands of Koror and Peleliu. “Leesan, are you serious you want to go?” Ken asked.

“Of course, I’ll regret it otherwise!” I replied.

So, how can millions of jellyfish be completely harmless to humans?

Jellyfish Lake used to be linked to the sea but was later separated from it as the result of the rising seabed. The deeper parts of the lake are still interconnected and there are about 70 large and small lakes dotting the island; they are all saltwater lakes too. However, because of continued rainwater dilution over the years, the salinity as well as nutrients of the lake have been remarkably reduced. As a result, some marine creatures are not able to survive.

But jellyfish that live on trace quantities of microorganisms have been able to survive to this day, making the inland saltwater lake an optimal breeding ground for non-toxic jellyfish.

After inhabiting the lake for generations, the jellyfish here have evolved and no longer require toxins for their own protection. Having said that, the lake has to endure the El Nino phenomenon which happens every 10 years or so. El Nino is so powerful that it actually wipes out the jellyfish population here each time it strikes. Because of this, Jellyfish Lake has to be closed for several years after each El Nino occurrence to restore the jellyfish population.

During the last El Nino a few years back, “millions” of jellyfish were reportedly perished.

Midday is the best time to swim with the jellyfish because that’s when they start to emerge from under the water to the surface, glittering in the golden sunlight, contracting and relaxing gracefully.

Although many overseas trips have been put on hold, we can still experience the joy and beauty of travel by rediscovering the places we’ve travelled to before, through pictures, videos and articles. Once we can safely travel again, why not choose Palau as your first destination? 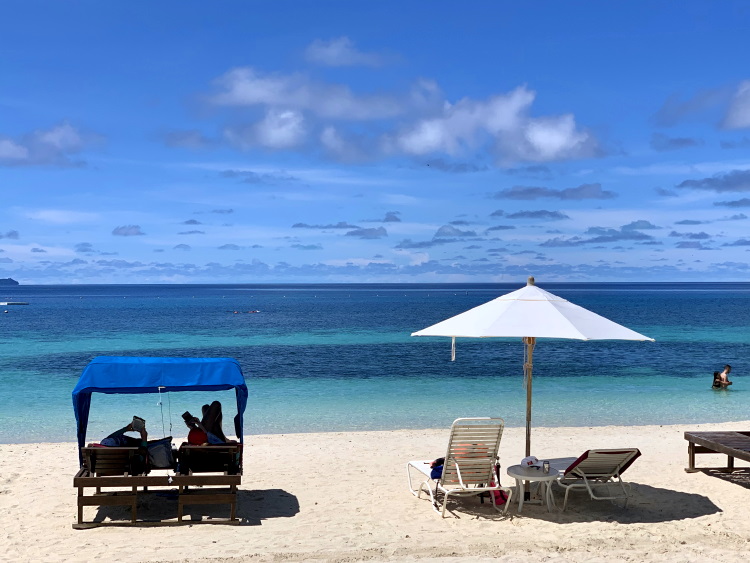 Private beach at the hotel and resort A natural mud bath in the most brilliant blue waters of Palau, the Milky Way 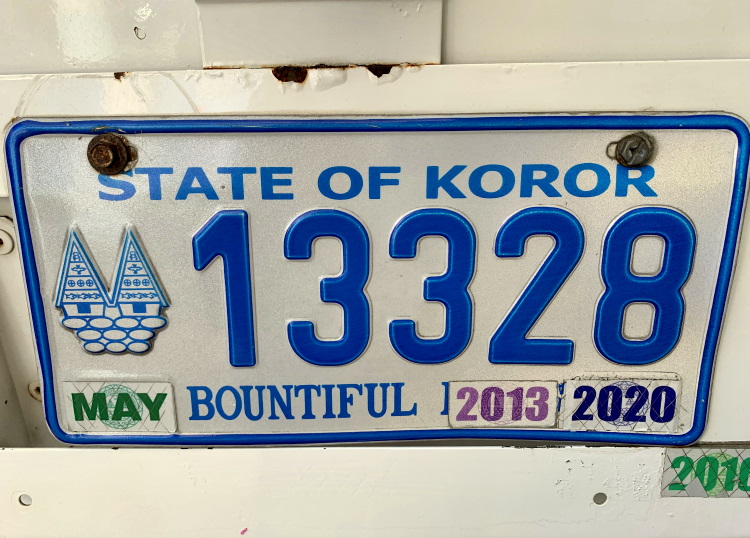 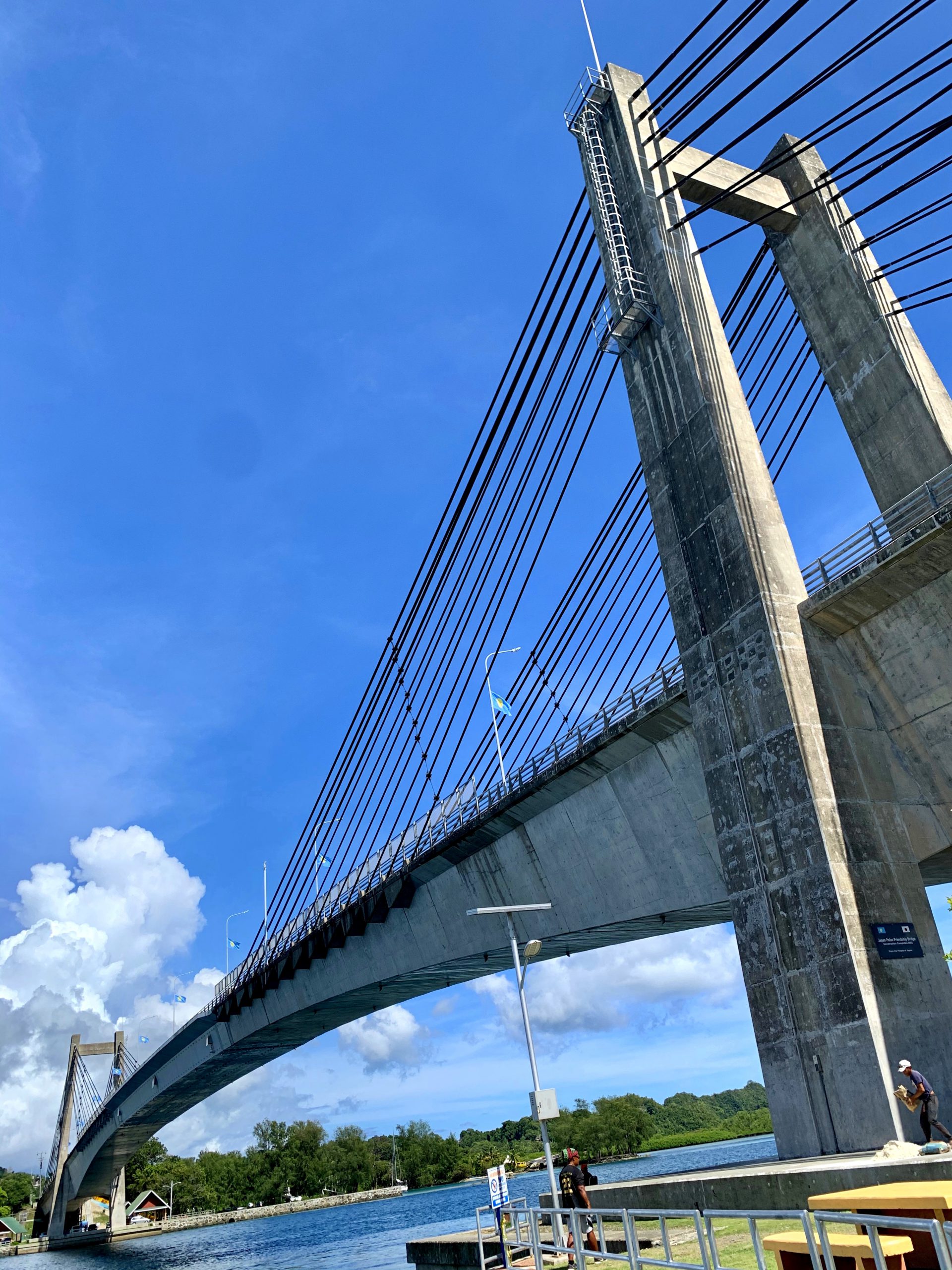 The highway to airport, Made by the Taiwanese