Everyone says people returning from overseas tend to have big dreams.

As a matter of fact, I not only had big dreams, but also day dreams, dreaming that I could be a boss some day and who knows, even a tycoon!

Late 1995, while I was still a Year 4 student at Tokyo International University, I took the opportunity to make a trip back to Malaysia to study the country’s overall business environment, as I wanted to start my own business right after graduation. Serious enough, huh?

But… What kind of stuff was I going to sell? Selling a lifestyle? Selling weight management? Or selling quality?

Seniors told me not to go into something unfamiliar. As traveling was my strength, I was all set to go into this business. 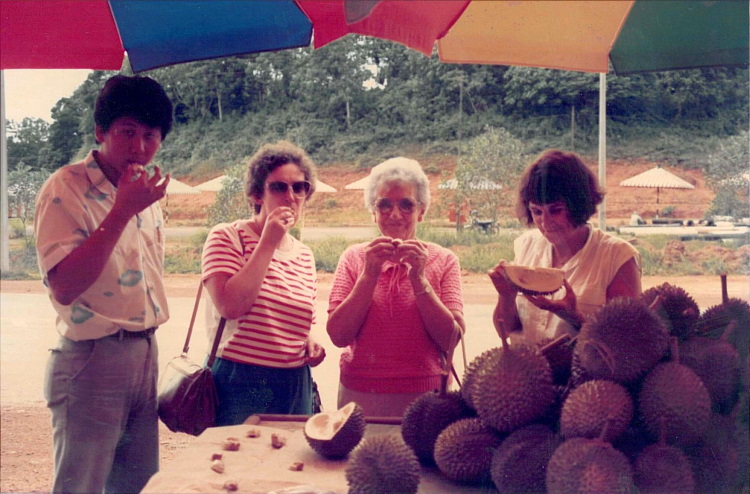 I tried my best to explain to my foreign guests who in turn became my inspiration and opened my eyes to the outside world.

In fact, I had been a big-time traveler all the while. When I was in Form 4 (1981-82), I was an active leader of a uniformed group at school, and a hitch-hiking pioneer as well. Any fun and interesting event at school would not go without me. As such, I was later commissioned by the principal to organize the school’s graduation trips. I was already a Big Brother in student travel at that tender age!

Well, you might think that was not a big deal after all, but for a muddled teenager, I had to handle everything big and small — making phone calls, arrangements for accommodation and food and renting a couple of school buses for traveling to Singapore or KL, and even places as far as Cameron Highlands and Penang. I even doubled up as a tour guide, talking spiritedly into the mic!

Obviously, my tour organizer DNA had not only been galloping inside my blood stream, but was significantly boosted by that school assignment that was destined to shape what would become of me next in the fourth stage of my life — the Lee San that is.

In 1983, I left for KL after Form 5 to work on a part-time basis while furthering my studies. At first I took a computer course but gave up after half a year due to lack of interest. My objective then was to get a job with a steady income so that I could do what I loved most, traveling.

Initially I took up a clerical position at a trading company before I switched to sales. My boss Mr Tan was a Foochow man from Sarawak, and was therefore taking very good care of this young outstation Foochow lad. He even patiently taught me some business English. Back in those years, English was the universal language used in international telex, while facsimile was not common and handphone simply non-existent. Socializing was done predominantly in face-to-face talks.

Unfortunately, due to some business problems Mr Tan had to end his business soon afterward, while I became pop ice delivery man and later the outlet manager of an established book store outside TAR College.

Whatever I did for a living at that time, one thing was unchanging as ever. I would try to make some short trips whenever I had a little of free time. 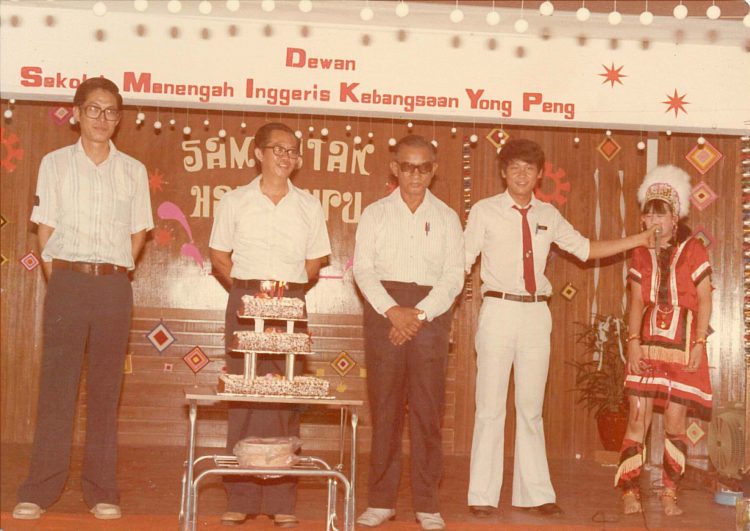 I was an active leader of a uniformed group and pioneer in hitchhiking during high school.

However, during my stint at the book shop, I changed my mind after coming into contact with an infinite selection of books and learned people visiting my shop…As it was an important turning point in my life, I will talk about this in a separate article.

As I was an extrovert who loved to make new friends and have fun, it was easy for me to mingle with new friends. Two years later, I started Stepoint, an amateur youth recreation club, with a dozen like-minded new friends. At a time social media had yet to make a presence, the recreational activities we organized were rather well known among the people. Among other things, we hired two buses for a Pulau Redang camping tour for 80 participants (there wasn’t any hotel on the island back then), organized a lantern festival celebration for 300 at KL and Selangor Chinese Assembly Hall, and another one at a mini stadium in KL’s Chow Kit area. You guessed it, I was the one doing most of the talking over the mic in all these events!

In 1991, I decided to further my studies in Japan while most other founding members left Stepoint to pursue their respective endeavors.

Notably, I had my tour guide licence (ID No: 2079) in 1988 and worked at a couple of travel agencies before I went to Japan. I started with the very established Reliance Travel (ceased operation in 2019) working as a driver cum guide serving mainly independent travelers from Australia, New Zealand, Finland and Italy, I took them all over West Malaysia and even across the border to Hat Yai and Phuket in southern Thailand. I did my best to explain to these Western tourists the geography, history, culture and local delicacies of my country. There was this time an Australian tourist asked me about a plant species in Cameron Highlands, which I didn’t know. So I had to tell him embarrassingly, “I’m so sorry, but I will find out the answer for you as soon as possible.” I later rushed to the resort trying to get help, and managed to find some reference books there.

The second morning, I told him the answer and he said gleefully, “Well done, Lee!”

Actually he already knew the answer. While these Western tourists might appear very easy-going and care-free, many of them had done a lot of reading and preparations before setting off. Most of the time they were asking just to confirm what they had known.

Bit by bit, working as a tour guide has given me boosted confidence and the opportunity to see the whole country. I particularly loved Federal Route 3, and would occasionally travel along the East-West Highway (between Kelantan and north Perak) before sundown, as the highway was still under curfew after dark at that time. It was said that there were reported cases of communist sabotage then!

During those two years interacting with Western tourists, I learned a lot from them and this helped expand my scope of vision. What an awesome job it was! At the age of 23-25, I had only visited Singapore and southern Thailand, and these tourists became my mentors, bringing the whole big world to me. I was thinking, some day I would visit all their home countries one by one. Because of this, even until this day in year 2020, I’m still keeping their photographs and the letters they wrote me. 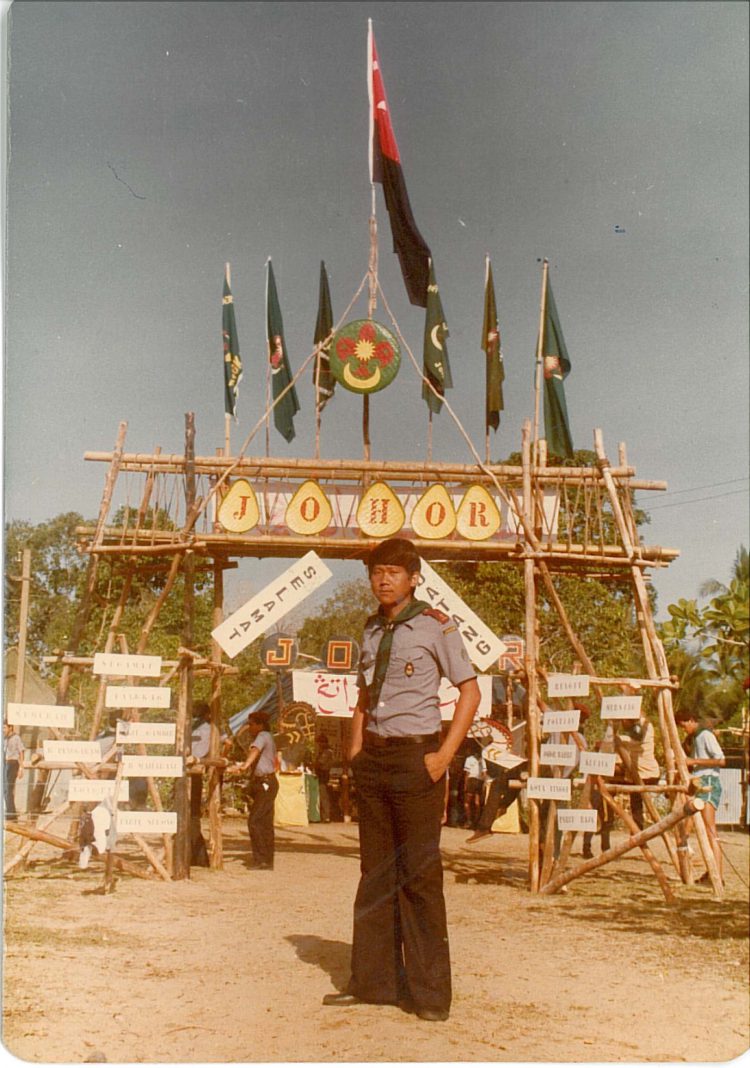 Active in scouting activities, I never absented myself from any fun-packed school event.

From a mini van, I was upgraded to be a guide on big tour buses. It was 1989 and I was with Mandarin Travel (ceased operation in 2002), an established company specializing in inbound tours for visitors from Taiwan and Hong Kong, as well as outbound tours to Japan, South Korea and Taiwan, with four very talented business owners complementing one another in their expertise. Although the company is no longer in operation today, it used to be a hotbed to produce countless of today’s industry leaders.

Back then my direct superior was the young and energetic manager Lai who assigned lots of tour groups to me, allowing me to meet Taiwanese tourists from different walks of life. That was when I came to realize that young male Taiwanese of conscription age were not allowed to travel out of their country. I also learned that for tour leaders or travel agency staff, the entire Taiwanese society showed an inclination in favor of individuals with exceptional academic qualifications and other qualities. I then decided that one day I would go to Taiwan and learn something there.

But before I embarked on my Taiwan study tour, I made up my mind to leave everything behind to go to Japan in 1990, and remained there until I came back to KL to start my own business in 1996.

I only had the chance to visit Taiwan as recently as October 10, 2005, and found myself totally fascinated by its fabulous recreational farms since.

(Lee San is Founder and Group Executive Chairman of Apple Vacations. He has traveled to 132 countries, six continents, and enjoys sharing his travel stories and insights. He has also authored five books.)