Leesan remembers what it was like to visit Sabah’s beautiful islands last year, minus all the tourists.

Many destinations around the world are worth preserving and maintaining for generations to come.

OFTEN, when I come across “Unesco World Heritage Site” signboards posted at the entrances of some of the top tourist destinations in many parts of the world, I am full of respect for the place.

One of Unesco’s most successful missions has been to carefully select significant and priceless cultural gems and bestow them with the “world heritage” accolade, which in turn increases their touristic value. Such sites have not only managed to woo millions of tourists, but have also encouraged visitors to understand the world better through the acknowledgement of historical events.

I think that when people know the significance of past events, cultures and civilisations in a particular place, they will develop a feeling of respect for it, as well as for the people who used to live there.

The writer(squatting, second from righht and his travel guests at Abu Simbel, an ancient temple complex in Egypt. The temple has four giant statues of Ramesses II at the entrance. – Photos:Leesan 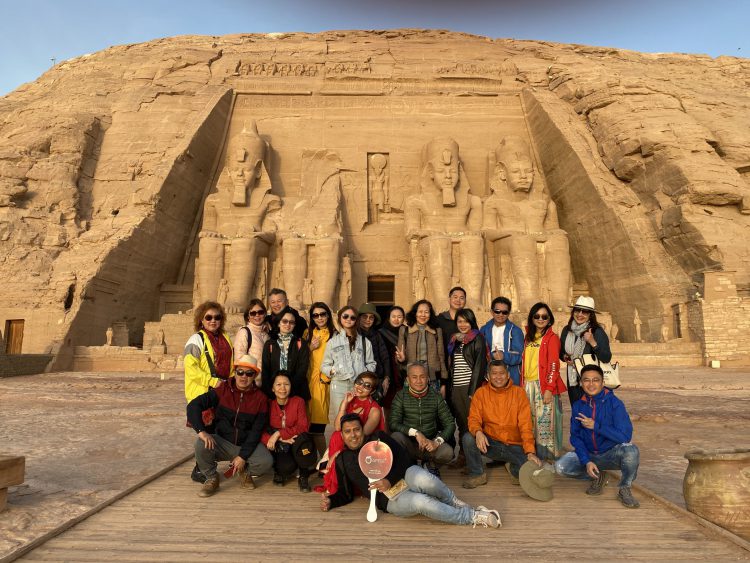 This list included the 19 Galapagos islands and the ancient capital of Quito in Ecuador, the Yellowstone National Park in the United States, the Old City of Krakow and Wieliczka subterranean salt mine in Poland. These were also the earliest world heritage sites that I had ever visited.

Although these sites have been properly maintained, I am still worried that they might slowly be destroyed by natural disasters as a result of climate change.

Between 1960 and 1980, Unesco worked with some 50 countries to save the Nubian monuments submerged by rising water levels of the dam in Egypt, including the almost 4,000-year-old Abu Simbel and Philae temples. In the end, the remnants were relocated to higher grounds. It was such a massive and demanding operation, and this was what inspired the birth of the World Heritage Site list.

On July 31, 2021, a total of 34 new sites were added during the 44th Annual World Heritage Site Convention in Fuzhou, China, bringing the total number of world heritage sites to 1,154. These are scattered across 167 countries and territories, including 897 cultural heritage sites, 218 natural heritage sites and 39 mixed heritage sites.
Italy tops the list with 58 sites, followed by China with 56 and Germany with 51. Japan is ranked 11th with 25 sites while Malaysia has four.

Baalbek or Heliopolis is the greatest architectural masterpiece of ancient Rome. It is one of the most perfect ancient works in the world. – Photos:Leesan 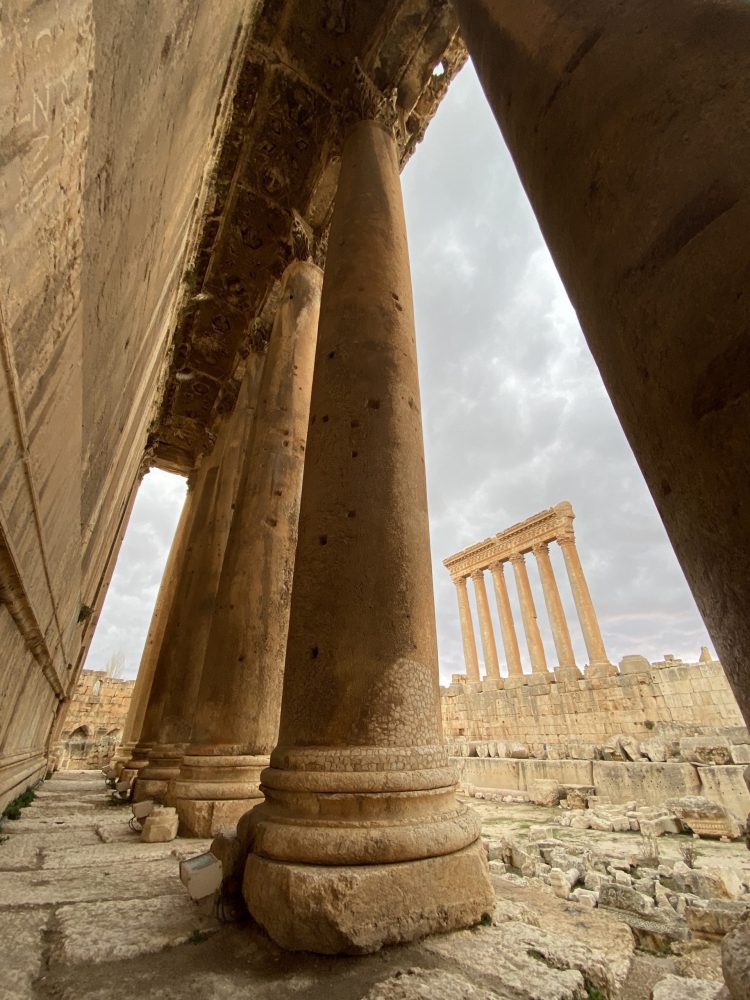 Being on the Unesco list brings high honour for any country. The UN body will not only offer financial assistance but also send experts to help maintain the sites, especially historical areas which warrant professional and specialty guidance.

That being said, some of these sites might also be removed from the list one day, owing to damages caused by natural occurrences or over-development. Among the earliest heritage sites removed from the Unesco list includes the Arabian Oryx Sanctuary in Oman, and the Dresden Elbe Valley in Germany.

At this year’s convention, Liverpool Maritime Mercantile City in England was struck off the list due to over-development.

Additionally, some 52 world heritage sites are put on the list of “endangered sites” for further monitoring, including the Great Barrier Reef in Australia (because of threats of natural destruction), and the Sumatran equatorial rainforests in Indonesia (illegal logging activities).

“The face of Abraham Lincoln” can be seen on the wall of the Deer Cave, Gunung Mulu National Park, Sarawak. – Photos:Leesan 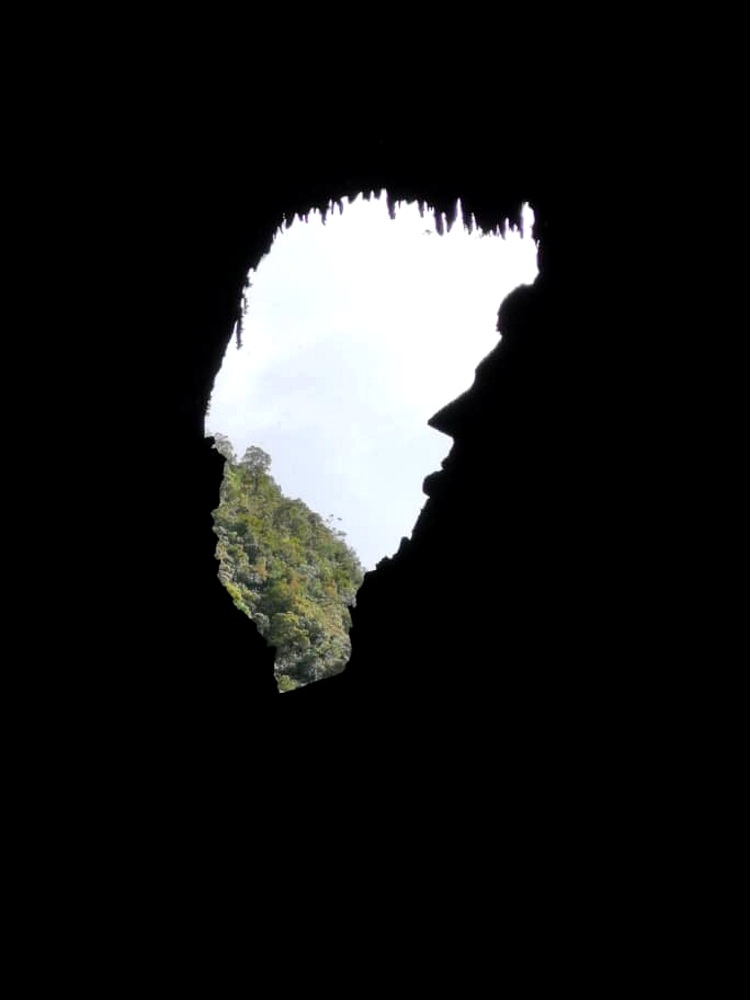 Seeing millions of bats fly out of the Deer Cave in Gunung Mulu National Park is something we should try to experience at least once. – Photos:Leesan

Be it natural or human disasters, the main culprit which causes most of the destruction has been the indifferent attitudes of authorities towards the true value of these sites.The Gunung Mulu National Park in Sarawak was listed as a World Heritage Site in 2000, but the top attraction was on the list of “State of Conservation” four times (read more at: shorturl.at/hiuCQ). This means that there have been changes made to either the site or its surrounding areas which threatens its World Heritage Site accreditation.

Thankfully, the national park’s ecosystem has been largely restored by teams of experts. The sight of a million bats coming out at night to look for food is something that everyone should experience at least once.

At the same time, I really hope that the Lenggong Archaeological site in Perak, listed in 2012, can be properly maintained because it is one of the most important historical legacies of our world.

Nothing in this world is permanent, and humans, especially so. But we must still do our utmost to preserve our cultural legacies for our children and future generations.

Ps: The UN has marked April 18 as the World Cultural Heritage Site Day. 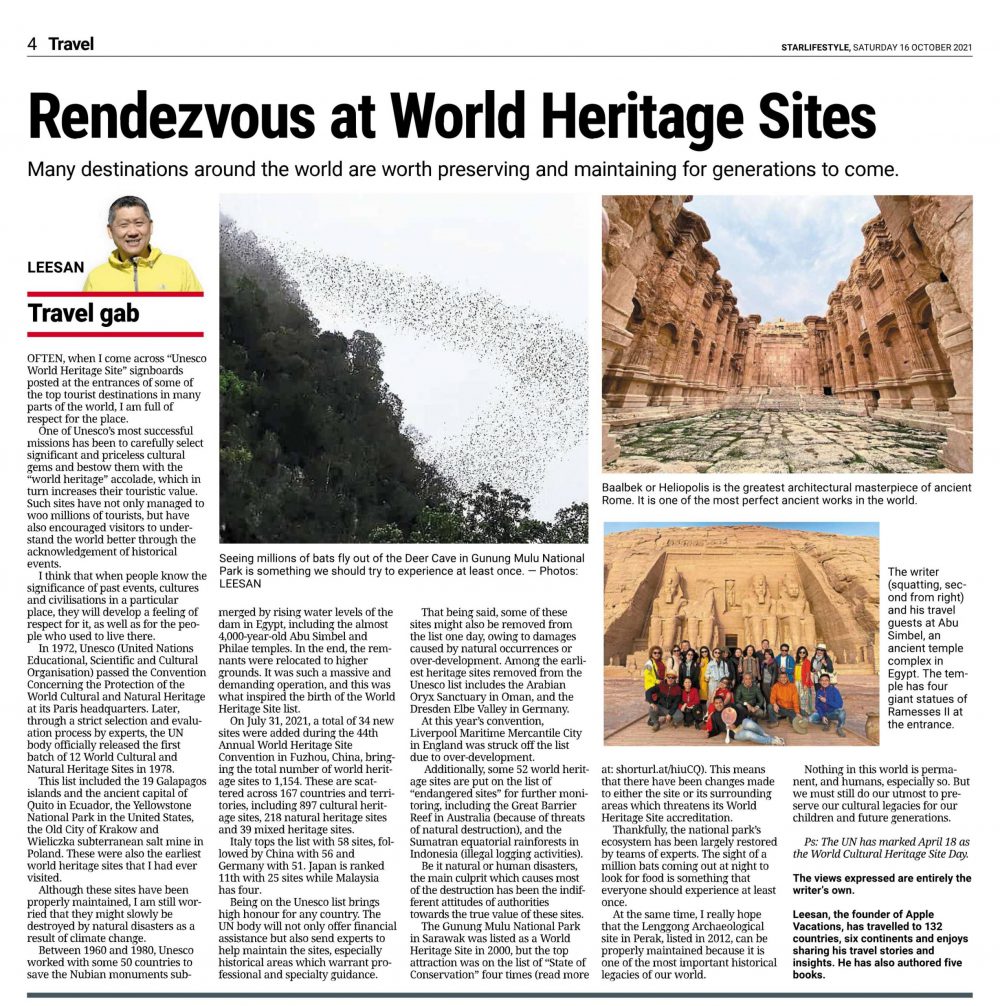