The writer flew across the South China Sea with a group of travellers eager to discover what Sarawak’s capital city has to offer.

The writer’s travel buddies from Peninsular Malaysia and a few locals in front of the popular photo spot, the Kuching archway.

THE big round moon was hanging high above us on the 16th day of the Chinese New Year, bringing cheer to the neon-lit night as the water fountain danced merrily.

We were at the riverside promenade at the old town in Kuching, Sarawak, which was bustling with activity. As my travel buddies from Peninsular Malaysia and I were strolling in the middle of the promenade, happily chatting and enjoying ourselves, it suddenly dawned on me just how much I have missed such a joyous atmosphere.

Most of us have confined ourselves to our small social circle for two years now and somehow seeing all the happy faces that were partly concealed under face masks was a pleasant surprise for us. I found myself having the urge to greet everyone I came across: “How are you? Still fine?”

The recent relaxation of travel restrictions in this country has injected a new lease of life into Kuching city, and the Sarawak economy in general.

We were the first travel group from the peninsula to enter Kuching since the interstate travel ban was lifted, and we were lucky to have travel blogger Chai Kit Siang as our local guide. Chai, who hails from Kuching, knew his hometown very well.

We visited a restored granary located in an unassuming alley in the old town. “Thanks to the painstaking restoration efforts of an award-winning designer, this dilapidated granary has been given a new life as Kantin, a food paradise that serves Sarawak hawker food,” he explained to us.

Both the food and dining atmosphere at Kantin got a thumbs-up from us, as we got a whole new perspective on what Sarawakian fare is like.

Chai is a man who can turn any simple place or item into something so intriguing and fascinating. His stories are intriguing and his narration style is very engaging. I believe it is young people like him, the ones who are willing to devote their time and expertise to safeguard our heritage, that can help revive and sustain the industry. In Chai’s case, he is helping to breathe new life into Kuching and promote the city to tourists.

Kuching’s old town is the perfect place to be at if you’re looking for a slow and steady tour rather than a fast-paced one. Allow yourself some time to really let the beauty of the place sink in.

After a rewarding afternoon walk – albeit under the scorching hot sun – in the old town, we took refuge at the riverside colonial clubhouse cafe and cooled ourselves with a coconut drink, imagining what the bustling streets of Old Kuching would look like. 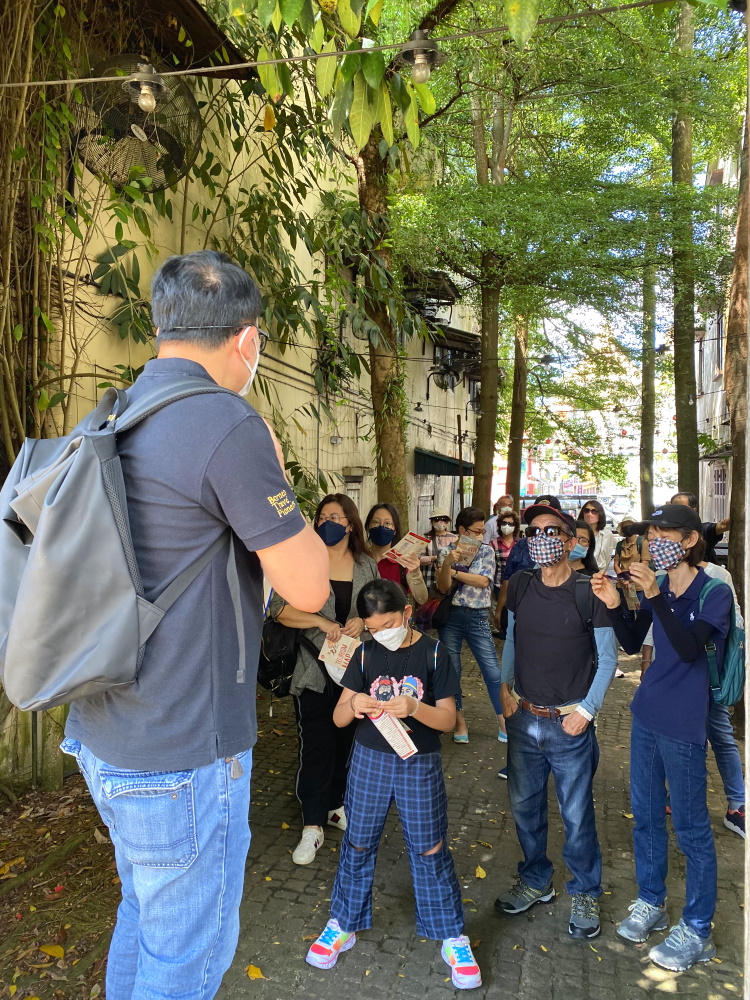 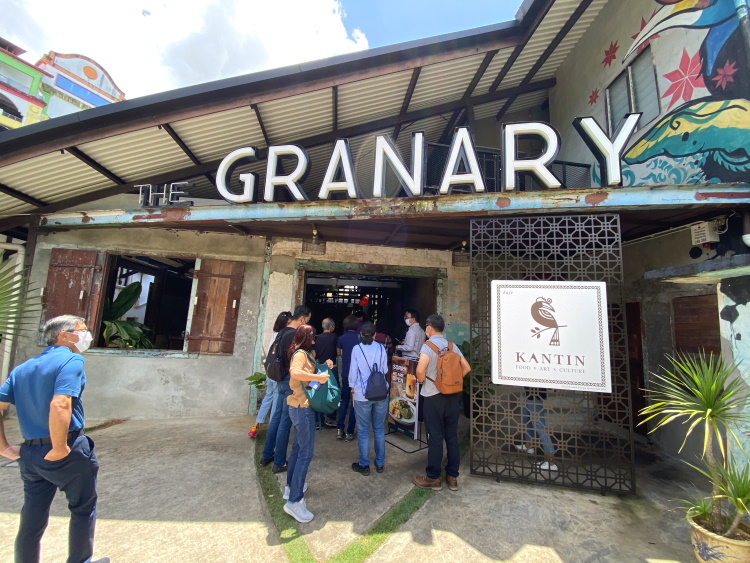 The old granary to famous “Kantin”: a must try Sarawak fusion. 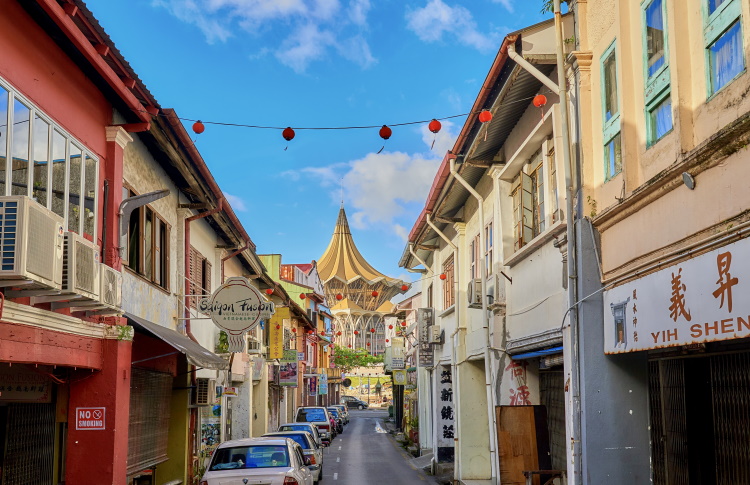 The century-old Kuching Old Street, with the New State Assembly Hall in the background. -Handout

We wondered why this city was called Kuching, or “Cat City”. Chai gave a few versions of stories on how the name came to be – we were surprised to discover that none had anything to do with felines!

According to a travel brochure, the name could have been derived from the Chinese word for harbour, kochin, or from a native fruit called mata kucing which resembles longan.

Statues of cats and cat-like animals have been erected all across Kuching, in street junctions, riverside parks and even at roundabouts. This is similar to the swan statues and figurines in Sibu, and seahorses in Miri. It looks like the authorities really know how to market these cities to the tourists.

At Carpenter Street, we saw rustic old shophouses that were decorated with lanterns. The hawker stalls did their businesses under strict SOP, with only two diners allowed at each table. At the recommendation of the local residents, we tried some Sarawak laksa from the stalls there, and we were glad we did!

There are many different varieties of laksa Sarawak available, and each one has its own faithful band of supporters. The Sarawak laksa and popiah at Choon Hui Cafe were our favourites.

Other than the mouth-watering local food, I also enjoyed immersing myself in the verdant forests of Sarawak at the world-famous Bako National Park, which is barely 30 minutes from the city centre. I quickly changed into a pair of good hiking shoes and was ready to get happily drenched in sweat.

To our pleasant surprise, we found many peculiar rock formations at Bako, which faces the majestic South China Sea.

Even though global warming, along with natural and man-made disasters have resulted in some environmental degradation here, the place is still worth visiting. The boatpeople of Bako are faithfully guarding the forest, and they have learned to coexist and peacefully live with one another. 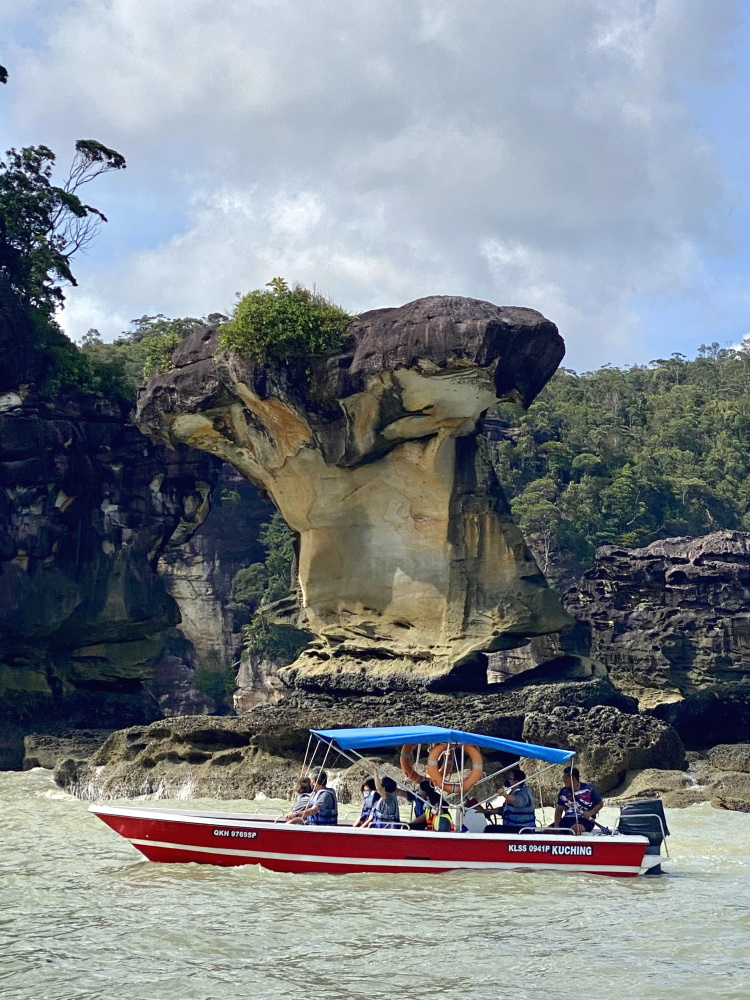 There were many unique rock formations at the Baku National Park. -Photos:LEESAN

Perhaps the orang utans at Semenggoh Wildlife Centre can feel the strong affinity to their birthplace much better than any of us. Here, we had the rare opportunity to meet the 1971-born “granny” orang utan Seduku, who has had three offspring. It is said that Seduku at one point slipped back to her native forest in 1995, but walked out of the forest again after more than a decade to return to the human family which had nurtured her for 17 years!

This is a largely unknown heart-warming story of an orang utan who shares 98% resemblance with humans in genetic build-up.

As a matter of fact, an orang utan is a matriarchal species that will care for their family throughout their lives, a precious lesson we picked up while visiting the rehabilitation centre.

Travelling around Sarawak, you will not only get to experience its bountiful ecological offerings but also its highly inclusive multicultural ambience where people from different ethnic backgrounds live together in perfect harmony.

In Kuching, we seemed to have experienced the long-missed muhibbah spirit of the 1970s that we once enjoyed in the peninsula. 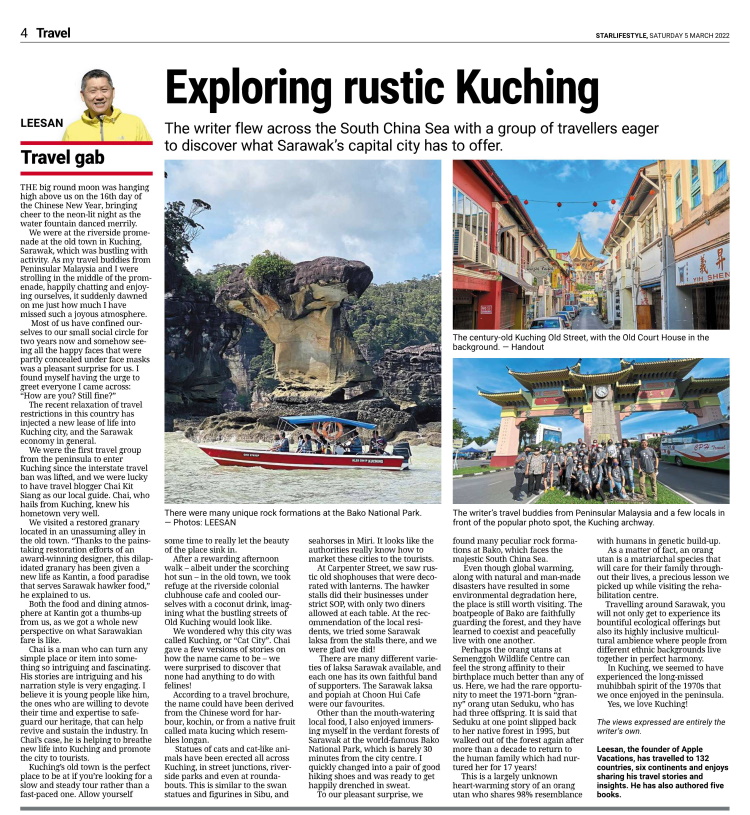