Is this another new norm? – by leesan

Is this another new norm?

With the price of crude oil rising each day, airfares are also increasing the world over.

AH Chong and Ah Lee, who have been friends for decades, decided one day that they would travel to Sydney, Australia together once the pandemic situation was better and travel bans were lifted. So, when Malaysia finally reopened its borders, and travel restrictions were also eased, the two friends quickly made plans for their trip.

They booked their tickets, which were already about 30% more expensive than pre-pandemic times, and proceeded to apply for their Australian visa. By then they were really looking forward to their holiday.

Unfortunately, one day before their departure day, Ah Chong and Ah Lee still had not gotten their visas approved. And if that wasn’t enough, they also realised that the tickets they had bought did not allow for a change in flight dates.

To top it all off, the tickets were not refundable either. They were devastated.

Two months later, they finally got their visas. The friends re-booked their holiday, but they were forced to pay a bomb for flight tickets as prices had soared by then. 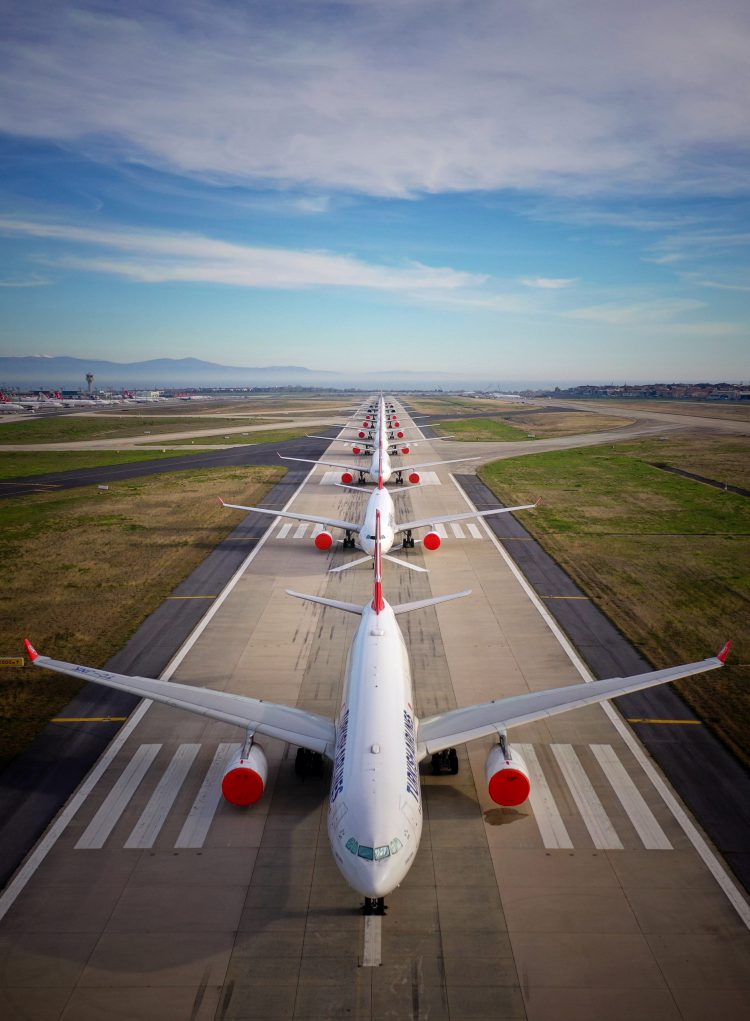 More than 45% of planes around the world are reportedly still grounded.

What Ah Lee and Ah Chong had to go through made me think about the stringent visa vetting measures that have been implemented by many countries today. Countries like Australia and Japan have set plenty of new rules and regulations in this regard, and application submission does not necessary guarantee approval.

I would just like to remind everyone who wishes to travel to Australia to get your visa sorted out first, before booking your tickets. As for Japan, do get an experienced and established travel agency to help out with the application of your tourist visa. At the moment, you can only enter Japan if you travel with a tour group anyway, so it may be easier to get the agency to do everything for you.

Also, do take note that airfare to many foreign countries have increased, and it gets more expensive the longer you put off buying the tickets. If you plan to travel to countries that do not require a visa such as South Korea, Turkey, any of the Asean countries or anywhere in Europe, you need to buy your tickets much, much earlier now. 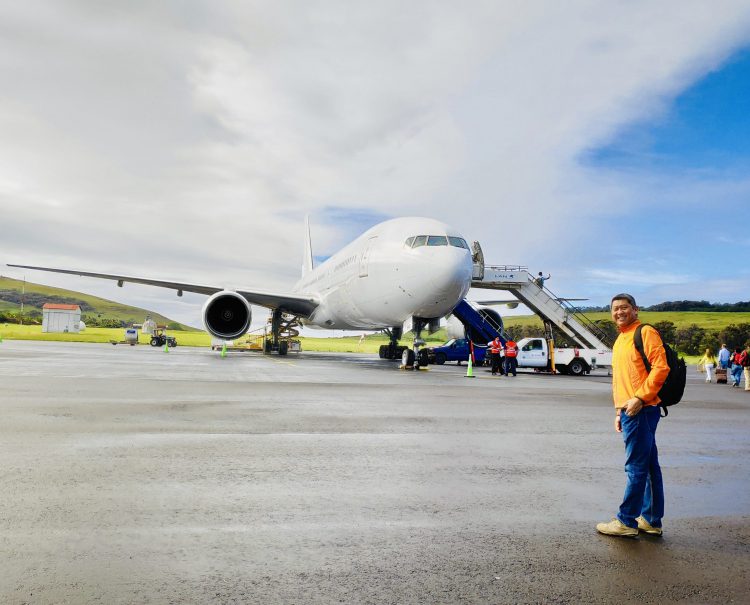 With the price of airfare increasing by the day, the columnist hopes most people will still be able to travel.-Photos:Apple Vacations.

It’s a challenging time for airline companies today as almost all are faced with the incredible rise in fuel prices. Still, global travel demand is also overwhelmingly high, so you could say that the recovery phase for the aviation industry is looking good, despite the price hike.

The industry is set to bounce back pretty quickly in the next few months.

By the way, have you heard or read about how much a one-way ticket to Guanghzhou, China – for a four-hour flight – can set you back? It costs anywhere between RM40,000 and RM50,000. Incredible!

A business class return ticket to Australia from Malaysia, meanwhile, could fetch as much as RM25,000.
You can almost imagine travellers out there yelling, “What the heck? That’s so expensive!”

Yes, “post-pandemic” airfares are unrealistically high, and even then, some tickets are not always available for purchase as regular flight routes have yet to fully resume. And not to mention the many and constant changes in rules and regulations. For example, the return dates for most classes of air tickets are fixed and absolutely cannot be changed.

If you can’t travel on the return date, you need to buy a completely new one-way ticket. Don’t forget about this, OK? Things are not going to be cheap!

It seems like it’s the airline companies that are calling all the shots now, and it is sad that even though everyone wants to travel, not everyone can yet. Especially during this summer holiday season.
Initially, many travel agencies like ours were excited about the reopening of borders, and we were ready to be part of the “revenge travel” trend. However, prices for group tickets for April to June departures were already between 30% and 50% higher a few months back so we expected fewer bookings. But seat supply was still relatively stable at first so that was good news for us.

Unfortunately, because of the Russia-Ukraine conflict, crude oil prices started to get out of hand. Due to this, some airline companies have changed their marketing strategies, doing away with group tickets (which are usually sold at a slightly lower rate) and selling seats at exorbitant prices.

Travel agencies then have no choice but to also increase our prices, especially for the upcoming autumn and winter holiday seasons. Don’t forget, too, that aside from airfare, the price for every supplementary item on most tours will also increase.

As far as I know, such steep price hikes would normally happen only in places embroiled in a conflict, or struck by a natural disaster. But now, it is happening everywhere across the globe, and simultaneously too. 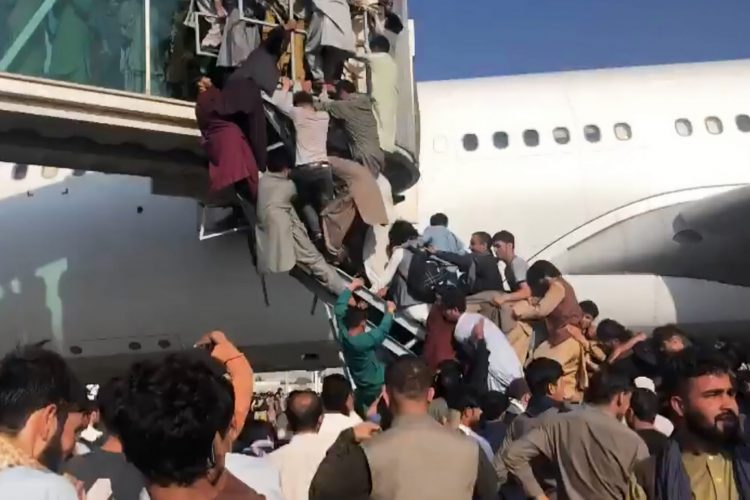 Perhaps we can try to put ourselves in the shoes of these airline companies which suffered unimaginable losses during the pandemic. We should feel happy for them now that they are able to recover some losses.

But sadly, even as the travel industry is slowly recovering now – the Russia-Ukraine war aside – the outlook of the overall market economy is still bleak, and many airline companies are still just observing the development, not yet rushing to bring back their pilots, flight attendants and ground staff.

Moreover, as countries around the world reopen, demand for air tickets have been dominated by business and social visit travellers. This explains why flight tickets are still selling fast, even with the high prices.
The relationship between airline companies and travel agencies has always been one that is mutually dependent and synergistic.

However, the way airfares are skyrocketing today may soon put travel agencies into trouble. For example, we may not be able to put up a decent tour group to fill bookings. Is this the beginning of a new norm in the tourism industry? 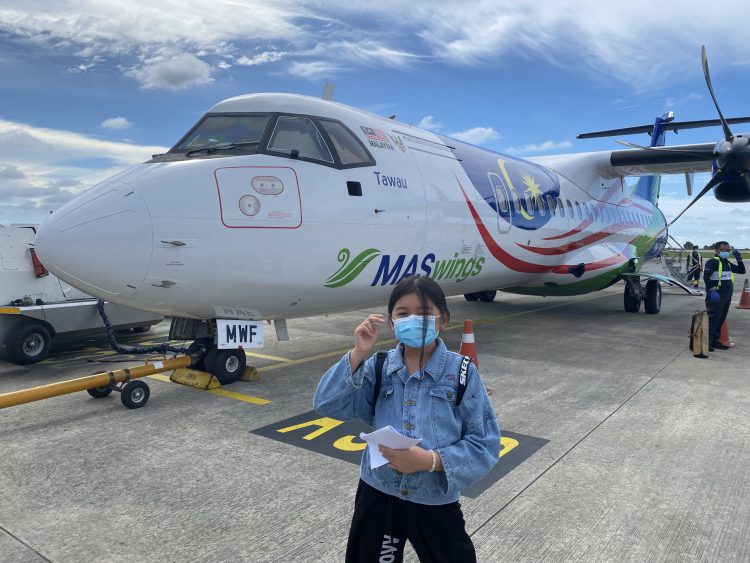 Yes I’m ready to take off, how about you? 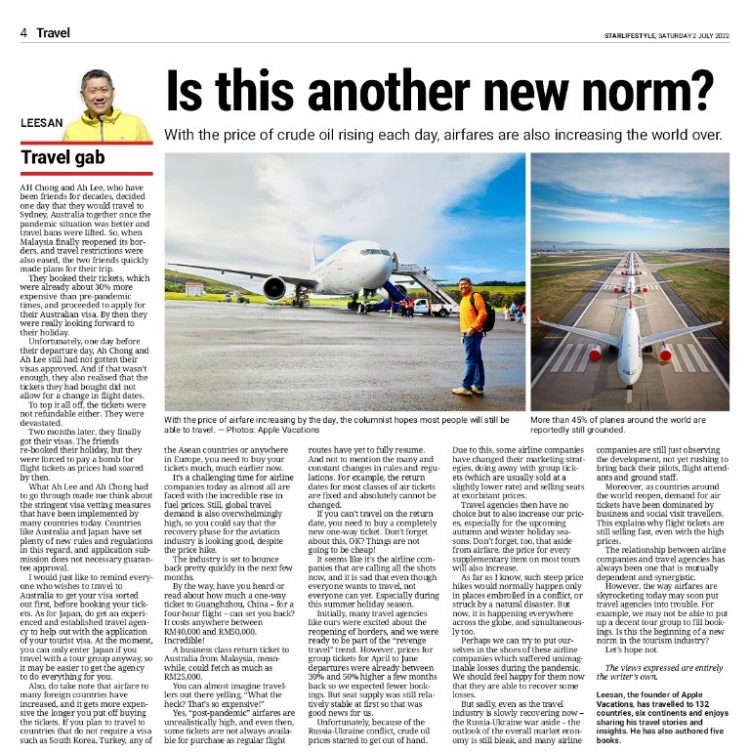