Ugliness, like beauty, is in the eye of the beholder, and that is something we have taken into account in our list of some of the planet’s most controversial architectural creations.

In fact, a more accurate title for the article might have been “the world’s most divisive buildings.”

Yet for every admirer of Ryugyong Hotel’s deeply sinister girth or Atlantis Hotel’s ludicrous fairytale gaudiness, you’ll find hundreds more that who would gladly see these and our other carbuncles razed to the ground.

Construction started in the 1980s so to be fair, back then it may have looked OK.

North Korea’s long and hideous Communist dictatorship has simultaneously heaped misery upon its people while offering the rest of the world several moments of unintentional hilarity.

This 330-meter pyramid/spaceship/sci-fi villain’s lair-themed concrete edifice is a prime example of the regime’s hubris. Erected, apparently, as a riposte to South Korea winning the right to host the 1988 Olympic Games, the impoverished North ran out of cash for the project in the early 1990s.

After a 16-year hiatus, construction began again in 2008 at the behest of an Egyptian investment group and the hotel is slated to open next year in time for the 100th anniversary of the birth of Kim Il Sun, the country’s late “Eternal” President.

This is a development that will surely herald the emergence of Pyongyang as a heavyweight tourist destination –- in the same alternate reality this monstrosity was conceived, that is.

Trivia: The Demolition S How video by the Italian architects Extraneo may not be as clever as it thinks it is but its depiction of the Ryugyong Hotel as Communist architecture’s Death Star is scarily fitting. 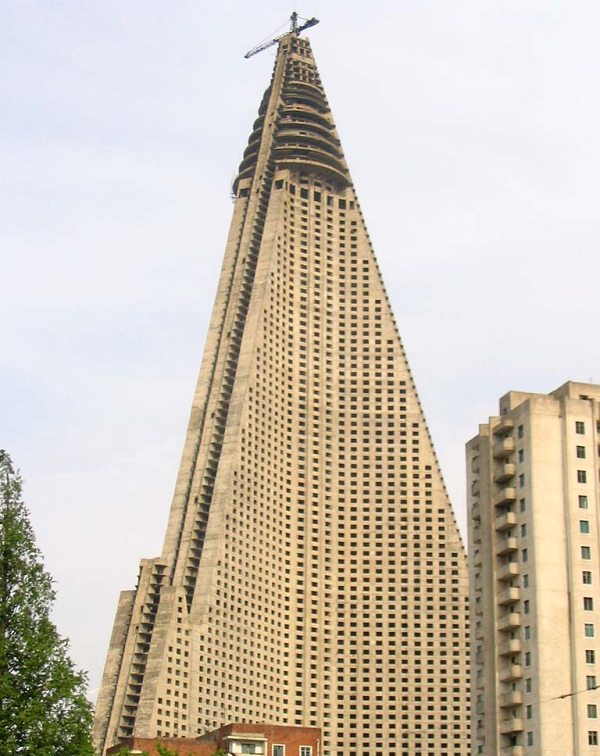 Much better to be in, than looking at.

Thanks to a massive bailout from neighbor Abu Dhabi and its bedrock of sun, sea, sand and shopping, Dubai has largely managed to weather the financial crisis that looked like flooring it back in 2009, and a modicum of sanity has returned.

Anyone nostalgic for the days when the Emirate was a byword for the empty-headed aspiration that sadly defines our era need look no further than Atlantis.

Located on the outer frond of the equally forehead-slappingly stupid Palm Jumeirah artificial archipelago, this hulk –- the brainchild of the late South African tycoon Sol Kerzner –- is an unholy architectural amalgam of Arabian Nights, 1980s TV soap “Dynasty” and a classic pink Durex.

Opened with great fanfare, not to mention eye-wateringly wasteful expense, at the end of 2008, the hotel boasts some quality restaurants and an admittedly great water park. The less said about its car-crash of an exterior the better.

Fact: The display that launched the hotel used 100,000 fireworks, around seven times more than were set off at the opening ceremony of the 2008 Beijing Olympics. 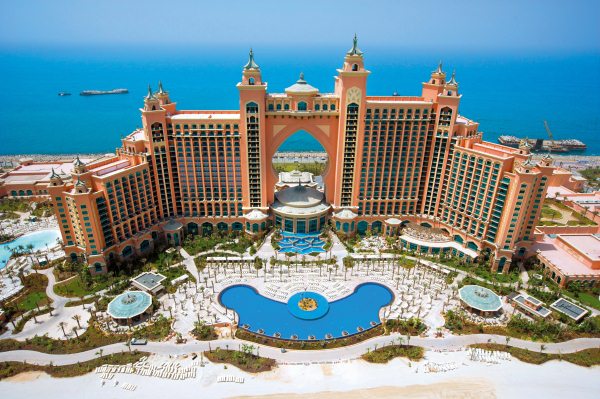 3. Palace of the Parliament, Bucharest, Romania

And there’s more ugliness below too.

The most repugnant aspect of this giant waste of space is not its visual rankness but the vainglorious psychosis of its chief sponsor, Romania’s former President Nicolai Ceausescu. Few executions have been greeted more gleefully than that of Ceausescu who, along with his equally hated wife Elena, was gunned down by a firing squad following the collapse of Communism.

An insight into just why he grew to be loathed so fervently can be found in the construction of the big hiccup of neo-classical sick he conceived as the seat of political and administrative power.

The building has over 1,100 rooms, is 12 stories tall and has several underground levels. Impressive undoubtedly, it’s just a shame that much of Bucharest’s historic center including 30,000 residences and 28 churches had to make way for the project. Ceausescu never was big on sentimentality.

Trivia: The building once conceived as a totem of Stalinism’s inherent greatness was last exposed to the wider world when Jeremy Clarkson, the charismatic host of the BBC’s “Top Gear” show, drove through its underground tunnels in an Aston Martin. How ironic. 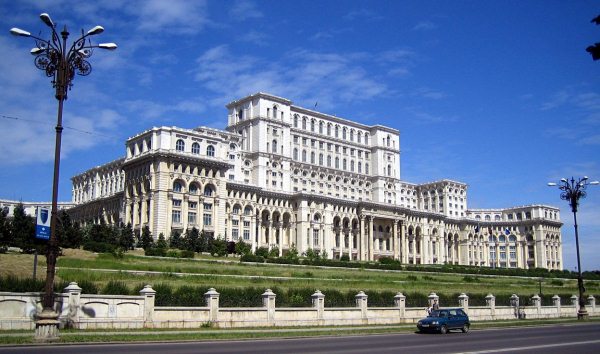 Palace of the Parliament, Bucharest, Romania

Even babies climbing up the sides can’t make this thing cute.

The trouble with 216-meter towers is that they tend to be noticed. You would be forgiven then for wondering why the architect tasked with designing a giant transmitter tower in one of Europe’s most picturesque cities didn’t come up with something better than this replica of a space-shuttle launch.

Immediately resented by Prague residents on its completion in 1992, the concrete and aluminum structure is almost apologetic in its incongruity amidst the surrounding historic splendor — neither imposing or iconic enough to inspire even grudging respect.

Fact: The tower was once known by Czechs as “Jakesuv prst” or “Jake’s finger”, a reference to Milos Jakes, the detested General Secretary of the Communist Party of what was then Czechoslovakia at the time the building was erected. 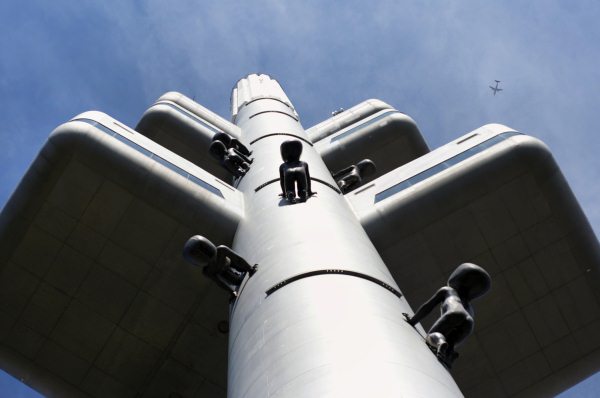 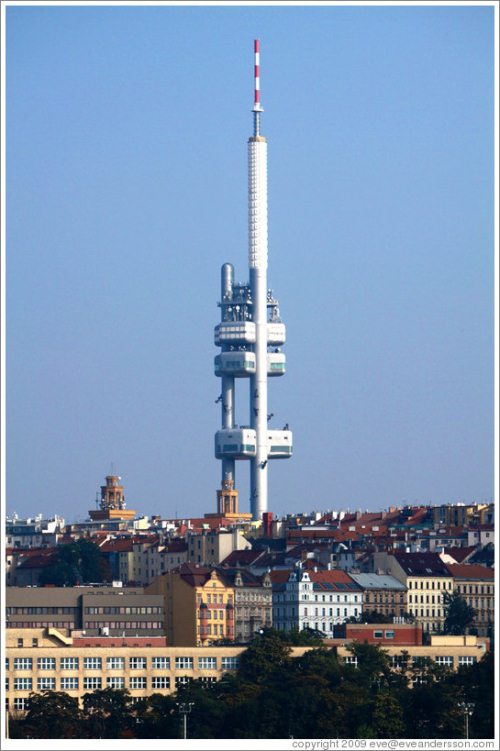 The wall of sound gives way to a wall of vomit.

Music at its best is meant to evoke emotions ranging from fervent excitement to heartbreaking melancholia.

It goes without saying then that a building devoted to the artform that rarely inspires more than curious befuddlement ranks as a fail of epic proportions. That this garishly colored giant splodge of steel and aluminum was designed by the celebrated Frank Gehry makes it a letdown to rank alongside late period Elvis.

The architect supposedly channeled the anarchy of “smashed-up Fender Stratocaster guitars” into his design. The fact his astronomical fee resulted in something more akin to Technicolor open heart surgery can’t have been music to the ears of project founder Microsoft billionaire Paul Allen.

Fact: Jimi Hendrix, a prominent Seattleite, inspired the museum’s name and design. A voracious consumer of LSD, the guitarist might have appreciated Gehry’s design more than its modern audience 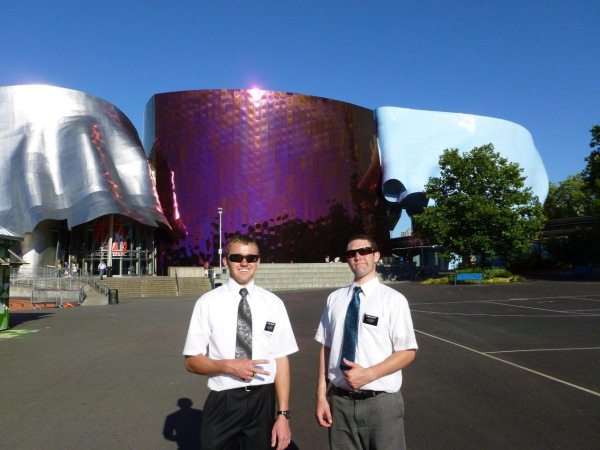 You’d want to be cremated too if this was your final resting place.

Ho Chi Minh’s name translates as “bringer of light” but there’s nothing remotely uplifting about the hulking marble edifice that marks his final resting place.

An ebullient character himself, Vietnam’s revered former leader would likely have baulked at the idea of spending decades embalmed in this cheerless place. Indeed, his stated desire for a simple cremation was ignored by the keepers of his socialist flame in favor of preserving him forever in lifeless repose in the frigid bowels of the building.

The structure itself is apparently meant to evoke Vietnamese traditions including a communal house and a lotus flower (how the two can be combined in one building is unclear) but crueler observers have compared it to a giant Greco-Roman public toilet.

Fact: In his will Ho Chi Minh said that cremation “would be more hygienic than burial and would also save land for agricultural practices.” You don’t always get what you wish for. 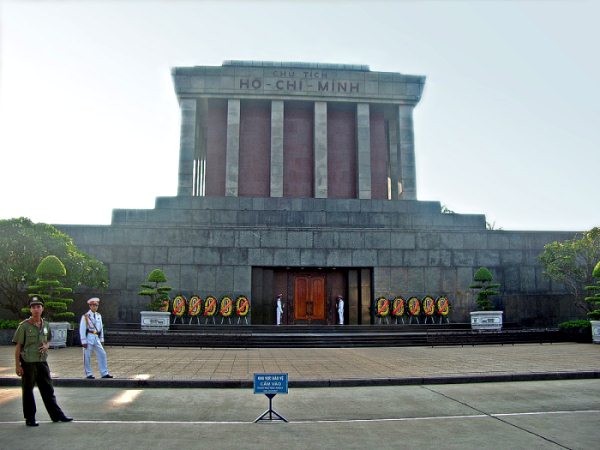 What you might get if Optimus Prime was your architect.

If it seems that we’re being overly skewed against Communist regimes, we’re not. There are some monstrous examples of civic architecture in the West -– this prime example of late-1960s design being an unlovely case in point.

Far from conjuring images of heavenly repose, the church is more akin to a giant concrete tent, hence its local nickname “Paddy’s Wigwam” (Paddy being pejorative for Catholics of Irish descent).

The Cathedral project was ill-starred from the off. Designs by Sir Edwin Lutyens and Adrian Gilbert Scott were rejected for being, in the case of the former, too expensive, and in the case of the latter, not good enough. The task eventually fell to Sir Frederick Gibberd and it is his finished product that stands to this day.

Fact: The cathedral authority sued Gibberd for £1.3million (US$2 million) when the aluminum roof started to leak and defects were noted in the mosaic tiles. Strangely they seem to have been happy enough with the building’s actual design. 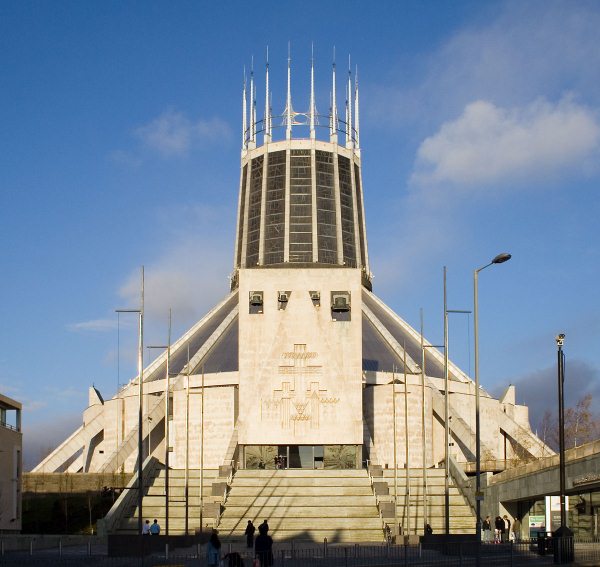 Prison-like, without the cool.

It is an accepted fact that the 1980s was the decade where taste went mad and decided to start donning pattern sweaters and shoulder pads. However, that still doesn’t explain why judges went with Michael Graves’ design for a new civic building in the U.S. state of Oregon.

A bulky post-modern monolith, the finished building is a bewildering blend of gaudy and unbelievable tedium. Tiny windows give it an unpleasant prison-like appearance while shiny blue glass and overly ostentatious terracotta pilasters aim for grandeur and modernity but end up looking like a frantic exercise in turd-polishing.

Fact: In 1990 when the lobby and food court were in need of remodeling, Michael Graves’ firm bid for the job. An employee apparently said at the time: “Michael feels like he owes the city one.” The best building in Shenyang? We won’t argue, but we will go somewhere else for our tourist picture.

Like most of the buildings on our list, this effort is distinctive if not distinguished. Architect CY Lee –- who did a much better job with his Taipei 101 skyscraper over in Taiwan -– wanted to fuse cultures by merging an old Chinese coin, complete with square cut-out, with a contemporary modern office block.

Unfortunately, the result is about as alluring a blend of East and West as a portion of soggy chips smothered in gloopy Chinese curry sauce — a favored post-pub offering in the United Kingdom. The circular design looks incongruous while the plate glass windows and concrete base are depressingly run-of-the-mill.

Fact: Critics may not like it but the local party bigwigs evidently do. It has been voted the best building in Shenyang by the impartial judges on several occasions. Where Lego bricks go to die?

In a way you have to admire Petrobras for its audacity. After all, it is not every leading multi-national firm (the energy company is the biggest in Latin America) that chooses to house its showpiece headquarters in a building that’s as awful as this.

A cross between a Lego tower and a bombed-out shell, quite why the company went with this dreary block is unclear.

Rio’s downtown Centro area is regarded as one of the more dangerous areas in the city to wander after dark so at least the war-torn feel of the Petrobras Building makes a modicum of sense in its local context.

Fact: The building is at least in good company. Its next door neighbor is Rio De Janeiro Cathedral, an equally controversial (read ugly) example of concrete brutalism. 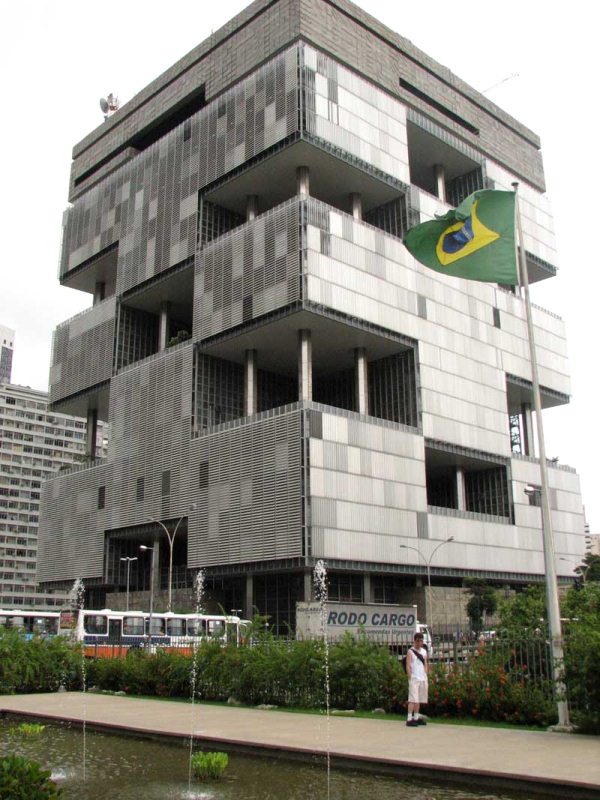 The Transformation of Guangzhou