12 reasons to visit Japan in 2012? Here’s one top tourist draw for every month of the new year.

12 reasons to visit Japan in 2012? Here’s one top tourist draw for every month of the new year. 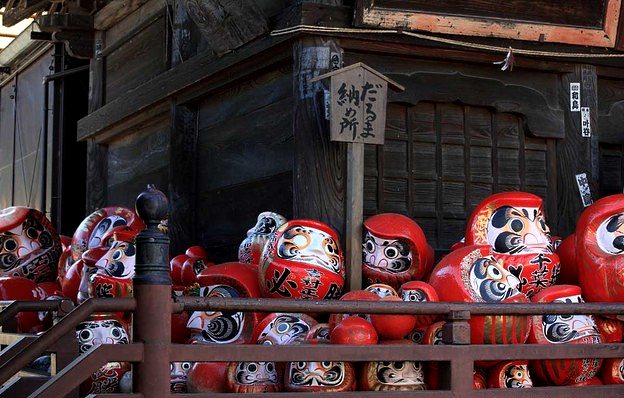 Hey little fella -- you get both eyes only if I have a great year, ok?

Hey little fella — you get both eyes only if I have a great year, ok?

Bright red daruma dolls are a symbol of good luck in Japan, due to their unique shape that allows them to right themselves when knocked over. Apparently, that’s a good thing.

The tradition of the daruma can be traced back centuries to Takasaki’s Shorizan Daruma Temple in Gunma Prefecture, which allegedly asked farmers suffering from famine to make the papier-mâché dolls to sell at the temple for extra income.

Today, the city of Takasaki remains Japan’s largest producer of daruma dolls, accounting for roughly 80 percent of total production. It also hosts the yearly Daruma Ichi (market) on January 6 and 7, although the little red critters can be found right through the early months of the year.

Visitors flock to the town to select their daruma from mounds of the things — from thimble-sized tiny ones up to dolls you’d need a truck to get home.

The roly-poly dolls are traditionally sold without pupils painted on them. The owner paints one pupil when making a wish or resolution, and if it is successful he then paints the other pupil. 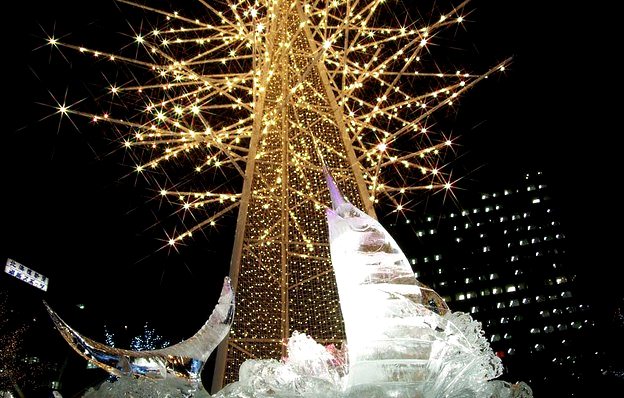 The ice swordfish centerpiece at the Tanakas’ party was the talk of the neighborhood for weeks.

Japan’s northernmost island is also its snowiest, but at least the residents of Hokkaido have some fun, stylish ways of ways of dealing with the cold temperatures.

The annual Sapporo Snow Festival is one of the most famous winter festivals in the world, boasting hundreds of snow statues and ice sculptures.

In 2012 the festival will be held from February 6-12, and those who plan their trip accordingly will also be able to take in the nearby Ataru Yuki Akari no Michi (“snow light path” from February 3-12) and Asahikawa Winter Festival (February 8-12).

For the former, lanterns made of snow are placed around the city’s canal and historic sites, making for a beautiful and peaceful evening walk.

The latter bears some similarity to the Sapporo festival, with ice sculptures accompanied by fireworks, laser shows, music and dance performances and, of course, lots of local food and some very cold beer.

Nara’s attention-seeking monks attempt to bring the house down.

Shunie is a Buddhist ceremony that has been held every year since 752, making it one of the oldest recurring religious events in Japan.

While it is practiced at various temples across the country, the most well known shunie is the one held at Todaiji Temple in Nara City from March 1-14.

The two-week event is actually made up of several smaller ceremonies, the most notable being otaimatsu and omizutori.

Otaimatsu involves giant torches six to eight meters long and weighing up to 80 kilos being carried up a flight of stairs and along the temple’s balcony, showering sparks on the crowd below.

On the last day of the festival, all torches are brought up to the temple at the same time, making for a truly spectacular sight.

Omizutori, or the water-drawing ceremony, takes place late at night between March 12 and 13. Buddhist monks descend repeatedly from the temple to a well below to draw the sacred water, which is believed to cure ailments. 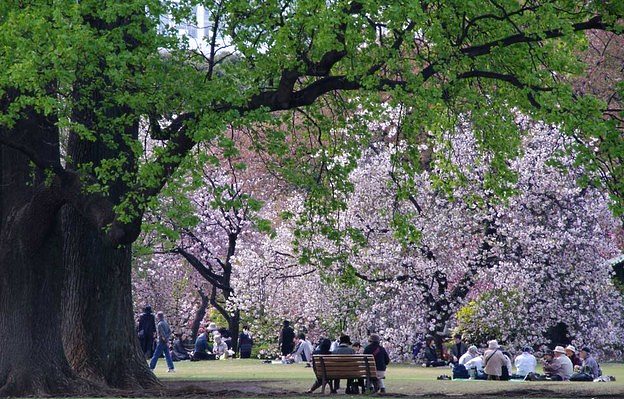 Tokyo’s wildest seniors break out the sake under their favorite trees.

Residents of Washington, D.C. like to brag about the beauty of their cherry blossom trees, but few remember that they were actually a gift from Japan, where the sakura is the unofficial national flower and hanami, or flower viewing, a popular national pastime.

The cherry trees bloom at different times across the country, but for most cities the best viewing times are between late March and early April.

There are only a few days each year when the trees are in full bloom, and during this time people of all ages flock to parks and temples to picnic under the blossoms with family, friends and co-workers.

After the March 11 earthquake, Tokyo Governor Shintaro Ishihara asked people not to practice hanami in 2011, so expect even more raucous festivities in 2012.

5. May: Scale the world’s highest tower 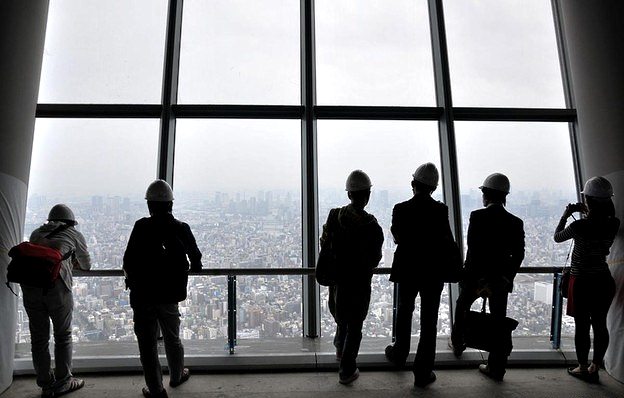 We’ve already been up it, but you’ll have to wait until May. So there …

The much-anticipated public opening of the 634-meter Tokyo Sky Tree is scheduled for May 22, 2012.

Already the tallest structure in Japan and currently the second tallest in the world after Dubai’s Burj Khalifa, the tower promises uncompromised and unrivaled views of Japan’s capital and its surrounds, including Mount Fuji.

Although its main purpose will be television broadcasting, the tower will also have two observation decks, one at 350 meters and the other at 450, which will feature a glass outer walkway.

Its convenient location near the Asakusa district means that visitors will be able to get a dose of both historic and modern Japan in one quick fix.

Noh is Japan’s most ancient form of theater, in which actors don elaborate costumes and lacquer-coated wooden masks and move about the stage incredibly slowly, expressing no emotion in their voices.

It’s also one of the world’s oldest forms of musical theater, accompanied by flutes and drums.

Watching a Noh performance at any time evokes images of ancient Japan, but Takigi Noh, or “bonfire Noh,” takes this notion a step further.

Performed by firelight at historic temples across the country, it can be a very moving experience. Head to Heian Jingu in Kyoto on June 1 or 2 to take in one of Japan’s most popular Takigi Noh performances. 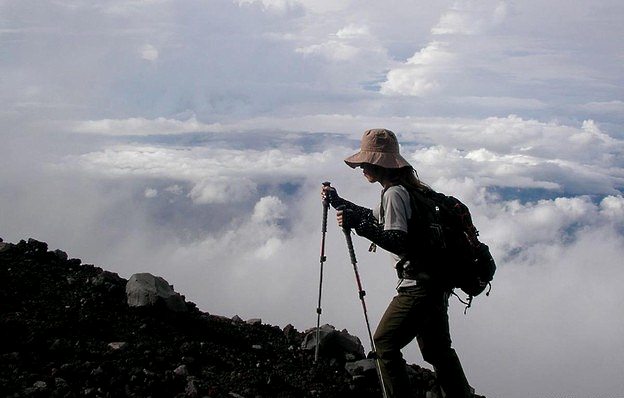 Climbing Fuiji-san — you know you want to.

The official annual climbing season on Mount Fuji (3,776 meters) comprises only two months, July and August, during which time over 300,000 hikers flock to its slopes annually for the chance to view the sunrise from the peak.

The recent hiking and outdoor boom in Japan has led to an increase in climbers of the mountain and so far there is no sign of the numbers receding.

So, before it begins to resemble Shinjuku Station in mid-summer, why not take the challenge to make it to the top on July 1?

Just remember to dress for the bitter cold at the summit and bring plenty of food and water.

8. August: Festival of lights in Tohoku Tourism in Japan, and especially the Tohoku region, may have taken a hit after the March 11 earthquake, but since then the number of international visitors has been steadily rising.

A good opportunity for tourists to lend their support to those in the quake-hit region is the Tohoku Sandai Matsuri.

The event is actually three separate festivals, each a different type of Tanabata (star festival) celebration.

The Nebuta Matsuri in Aomori, held from August 2-7, features a nightly parade of huge, lighted floats, flanked by dancers, taiko drummers and other musicians.

More night parades can be seen from August 3-6 during the Kanto Matsuri in Akita, in which groups of performers balance long bamboo kanto poles with lanterns attached to them.

Finally, there’s the Sendai Tanabata Matsuri from August 6-8, when the city’s shopping arcades are inundated with thousands of colorful streamers up to five meters long.

9. September: Get your game on 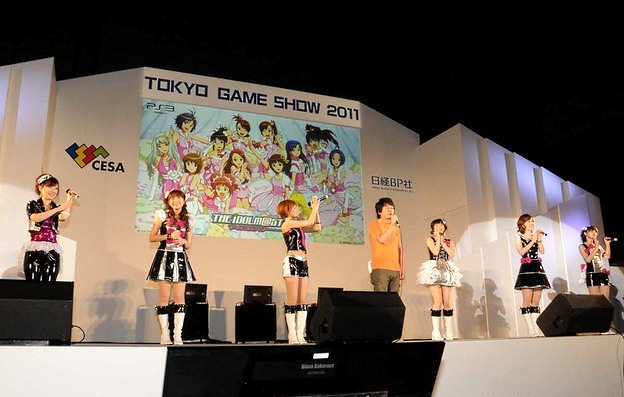 OK, hands up who thinks this is sure to involve a wholesome pastime?

For video gamers in Japan (and many who fly in just for this), there’s no better place than the annual Tokyo Game Show.

Held at the huge Makuhari Messe convention hall, the event generally consists of two trade-only days followed by two days that are open to the public.

This is where the industry’s biggest names, such as Sony and Microsoft, announce and preview their latest technologies and developments and fans get the rare chance to try their hands at cutting-edge games before they’re released.

It’s also a popular event for cosplayers and their followers, so don’t forget your wig and cape. You’ll need a few cans of Red Bull to get even the mildest buzz out of F1.

Japan first hosted a Formula 1 race in 1976, and after Fuji Speedway withdrew as host in 2009, Suzuka Circuit, about 50 kilometers south of Nagoya, is now the only place in the country to stage a grand prix.

The next Japanese Grand Prix is scheduled for October 7 and because of its position late in the season, the race is often a title-deciding one.

Suzuka is also considered one of the most challenging F1 circuits, meaning that races there are often even more exciting than elsewhere. Say it ain’t so! 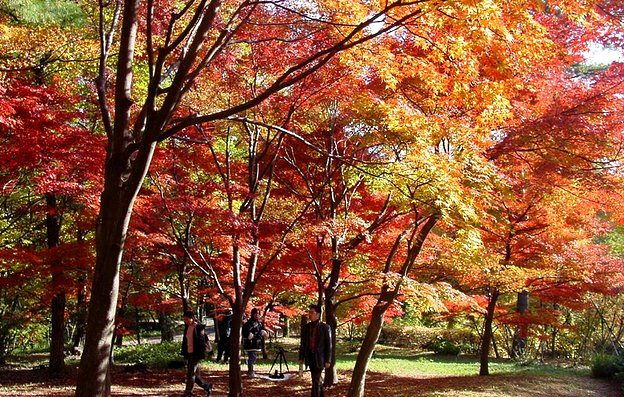 And the people gathered ’round the trees to crane their necks above and say, “Kirei, desu ne?”

Every country in the world has trees, and it’s a safe bet to say that many of those countries also have trees whose leaves change color in autumn. But to our knowledge, no other country reacts to this natural phenomenon in quite the same way that Japan does.

After hanami season, only koyo (colorful autumn leaves) sees so many people tilting their heads and craning their necks to get a good look at trees. From December through to springtime in many spots, Japan has some amazing snow.

While it may not quite rank with places like Aspen and Gstaad, Japan nonetheless has plenty of winter-sports resorts that supply as much powdery fun as any tourist could wish for.

Over the past 40 years, both Sapporo and Nagano have hosted the Winter Olympics, solidifying their status as world-class ski destinations.

Other popular areas include the quickly developing Niseko in Hokkaido, with its roughly five-month-long ski season, and Hakuba in the Japanese Alps, with an average annual snowfall of over 11 meters.

But for many, the best part about ski season in Japan comes after the slopes in the form of a relaxing, ache-easing dip in a hot spring.