February 14 may be a racket, but that won’t matter once you see what a great weekend break you can get out of it 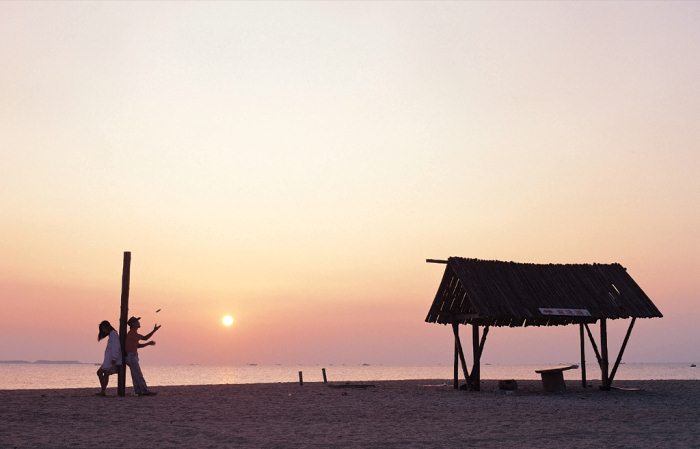 February 14 is the one day of the year you can spend long minutes gazing into someone’s eyes, a small fortune on some plants tied together with a bit of ribbon and a big fortune on a weekend away, without making other people feel ill — because they’re doing just the same.

Here are some options for the third leg of that lovely relay.

1. On a houseboat under the Eiffel Tower, Paris 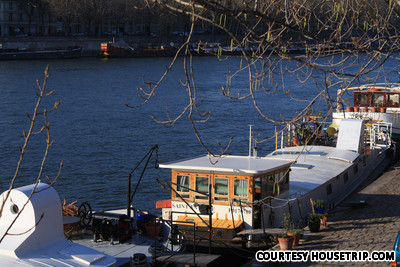 It's romantic and far cheaper than hotels in the center.

In this city of Mediaeval bridges, urban islands, Gothic chapels and 17th-century townhouses, all linked by the River Seine, you can wander the narrow streets of the Left Bank, marvel at the gargoyles of Notre Dame then enjoy the free light show bouncing off the Eiffel Tower every hour from dusk till 1 a.m., paying homage to lovers in a scene straight out of “Moulin Rouge.”

Best of all you can sleep on the river in a houseboat. Housetrip.com features one owned by a Michelin-starred chef who will cook you dinner by the base of the Eiffel Tower. Alternatively, take your Valentine close to the top, where the Jules Verne, 120 meters up, is considered one of the finest restaurants in town.

Houseboat from US$105 per night, www.housetrip.com; Dinner bookings at www.lejulesverne-paris.com 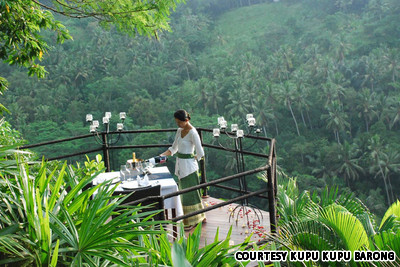 Who knew rice could be so romantic.

Bali has more temples than households and every doorway is strewn daily with edible offerings to the gods. But avoid the crowded seaside resorts in favor of spiritual Ubud in the hilly center, which the Balinese believe is closest to the gods.

Ubud provides the buzz of village life, island culture in world-class art museums and traditional dance performances and the seclusion of incredibly beautiful resorts where you can bathe al fresco overlooking rice terraces and ravines.

Mick Jagger and Jerry Hall nurtured their romance at one of the most romantic, Kupu Kupu Barong, named for the giant butterflies which dip in and out of the fragrant frangipani.

From US$306 per night: www.kupubarongubud.com 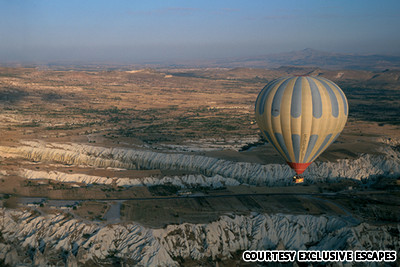 Good chance to roast some marshmallows too.

The cliffs, canyons and lunar landscape of this arid region of eastern Turkey are softened by the luxury of an intriguing boutique hotel built into a cave.

Salvaged from ruins overlooking the jaw-dropping Pigeon Valley near the village of Upishar, this stylish French-designed hostel is a great base from which to discover the nearby National Park, fourth-century cave churches, eighth-century frescoes and the Goreme Open Air Museum where the story of the region is told.

A special treat for lovers is a Champagne flight in a hot air balloon passing over the trails leading through the valley floor, with dramatic views across the desert.

Three nights’ bed-and-breakfast at Les Maisons de Cappadoce and two days private guiding from US$780 per person. Balloon flights from US$240 per person; www.exclusiveescapes.co.uk 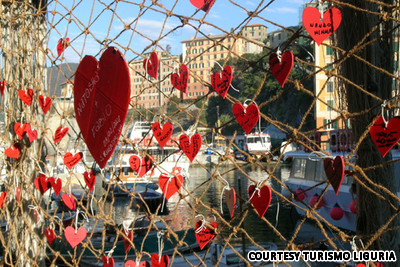 No dolphins were harmed in the making of this picture.

In the two weeks up to and including Valentine’s Day, this little town in the coastal region of Liguria is awash with sentimental couples making eyes at each other.

Bakeries and florists’ windows are packed out with hearts, poems and other schmaltzy symbols of love, and at sunset besotted couples gather on the waterfront to write each other’s names on cut-out Valentine cards and tie them to netting on the pier.

The legend goes that if your art proves weatherproof, your heart will go on. Soppy stuff, but if it all gets too much, you’re only half an hour away from the elegant port city of Genoa. 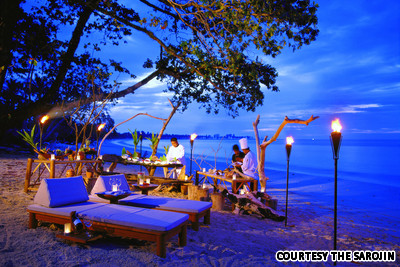 Just hope the tide stays out.

Khao Lak — it has white powder beaches, cascading waterfalls, some of the oldest rainforests in the world and idyllic lagoons.

But if waking in a resort, however rarified, feels like killing the Valentine romance, the Sarojin will arrange to shipwreck you and your beloved for a night on a deserted island. There they will serve the two of you a candlelight dinner and leave you overnight in a pitched tent furnished with luxury bedding.

Next day, after breakfast in bed, you’ll be “rescued” and returned to regular resort life on the mainland.

From US$4,627 for two, including a Thai cooking class, lunch beside a jungle waterfall, cruise to your desert island for the full overnight shipwreck experience, six nights’ resort accommodation and transfers from Phuket Airport; www.sarojin.com 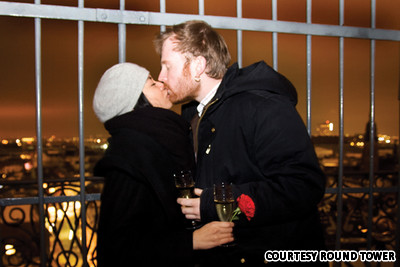 Gastronomy has put this charming little city on the map — Noma, housed in a beautiful old warehouse on a tiny island in the harbor, has been voted World’s Best Restaurant two years running.

But even if you can’t get a table there, you’ll enjoy wandering picturesque Nyhavn district, with its colorful houses and buzzy cafés, and when dusk falls you can head for The Round Tower, which dates from the 17th century and is Europe’s oldest star-gazing observatory.

It’s a shame Copenhagen’s Kissing Guide, which expressly sets out romantic sights for lovers, is only available in Danish. But the story of The Little Mermaid, who sacrificed her life in the sea for the love of a human prince, needs no translation.

Live music and candlelight will be the order of the evening at the Tower on Valentine’s Day evening, with hampers of bubbly and chocolate for lovers to feast on; more information at www.rundetaarn.dk 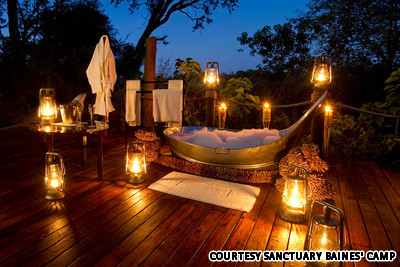 No fighting over who gets the end with the faucet.

The Africa of big game and even bigger skies immortalized by Karen Blixen has been equipped with some of the most romantic accommodation on the planet, from tree-houses to luxury tented camps.

But it would be hard to beat Baines Camp in Botswana, where free-standing tubs, complete with running hot and cold water, appear as if by magic on private decks to facilitate bathing under the stars beside the shimmering Boro River while big beasts prowl nearby.

The experience also includes night drives in the Moremi game Reserve on the Okovango Delta, where cheetah, crocodile and elephant roam.

From US$675 per night for two, including bed, bath, all meals and game drives; www.sanctuaryretreats.com

8. Proposing at the home of ‘The Bachelor,’ St. Lucia Hide the name of this package from your love, or you might give the game away.

The resort that played host to the reality television show “The Bachelor” is offering a Bachelor Proposal Package of its own.

Sit down to a candlelit dinner bordered on three sides by the sea at Cap Maison, and on your nod, an engagement ring, red roses and Champagne will be whisked down a 30-meter zip line from clifftop to your table on a private terrace.

You’ll have to hope the answer is yes, as the package also includes seven nights in a villa with private pool, a sunset cruise on a private 14-meter yacht, breakfast, dinner and bubbly.

US$8,875 buys all this and the nearest thing you’ll get to a guarantee: in the past four years there have been nine proposals, all of which received an affirmative answer; www.capmaison.com A great way to add some heat to a wintry break.

Take a horse-drawn troika past the pastel-colored palaces, onion-dome churches and canals of the Venice of the North. See the finest art collection on the planet at the Hermitage, visit the royal residences of Pushkin and Pavlovsk, and take in “The Nutcracker” at the Mariinsky Theatre.

You can also skate on outdoor ice rinks, marvel at the interior of St. Isaac’s, one of the world’s greatest cathedrals, and shop for caviar, amber, Cossack hats and sets of Russian dolls tricked out as the country’s leaders.

Four nights’ bed-and-breakfast at the Revolution-era Hotel Angleterre with airport transfers, tours and troika ride from US$1,089. www.originaltravel.co.uk

10. Sleeping on the dunes, Marrakesh, Morocco 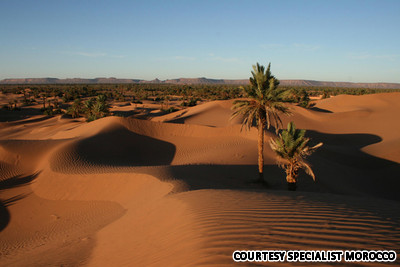 Riads, roses and a romp through the desert.

The Sahara is particularly beguiling when you start your trip in a romantic riad within the old walled city of Marrakesh, surrounded by roses.

Riads — traditional townhouses built around courtyards — are now 10 a penny and available to suit all budgets, but to really spoil yourself, book into Riad Farnatchi (www.riadfarnatchi.com) with its own private hammam and the best masseurs in town.

The desert adventure starts with a ride over the Tizi’n’Tichka pass into the land of kasbahs and dunes, nights are spent dining by candlelight outside your own luxurious tent and daytime activities include walks out into the desert with Berber guides.

US$1,125 for two per person including three nights in the desert with all meals and transportation; www.specialistmorocco.com 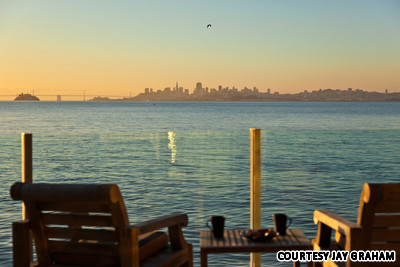 A city best appreciated when you're on the outside.

San Francisco, possibly the most romantic city in the United States, has one major problem — when you’re in it you can’t see that amazing skyline.

The answer is to stay at the fabulously romantic Inn Above Tide, just over the Golden Gate Bridge in Sausalito. You can gaze upon the skyscrapers from every one of the bay-view rooms, then take the ferry from outside the hotel and sail across for dinner at one of the many fine restaurants.

Top the experience off with a Ramos Fizz brunch at Sausalito’s Alta Mira, which overlooks the skyline from a hilltop.

From US$320 per night; www.innabovetide.com Bradenton is the unspoiled, natural face of Florida. On this part of the Gulf Coast there are almost as many award-winning beaches as there are loved-up couples dabbling their toes in the water. Balmy blue seas and a string of natural islands, as well as the odd chic restaurant and bar, top it all off.