My first encounter with the North Pole 90oN is probably the only once in my lifetime. This will be my last chance as next summer 2015 “50 Years of Victory” the world’s largest icebreaker…… 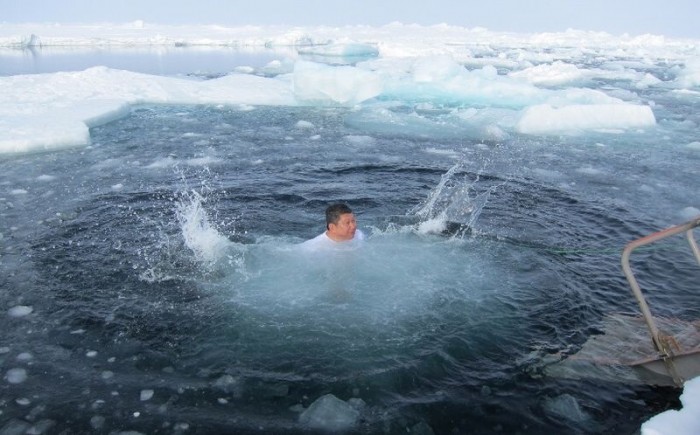 My first encounter with the North Pole 90oN is probably the only once in my lifetime. This will be my last chance as next summer 2015 “50 Years of Victory” the world’s largest icebreaker with 75,000 horsepower nuclear-powered steam turbines will be retired and will be converted to cargo ship.

As I stepped on this point at the top of the world, at the latitude of 90oN above the freezing ice, every perspective from this vantage point is southward. This point is a distant dream for many people. It is only this icebreaker that could bring the 14 of us Malaysians on our maiden expedition along with 120 other travellers from 12 countries around the world to this tip of the world. Until now only slightly more than 10,000 people have made it here. This trip is the 120th sail of the “50 Years of Victory” and its 77th expedition to the North Pole.

90oN as the name implied, is 2,318 km from where we boarded the icebreaker at the Russian Murmansk port of 69oN and after we set sail for 5 days 5 nights.

The North Pole is only a small point on the 13,100,000 sq km area of the Arctic Ocean. More than half of the ocean is covered in a thick layer of ice for many years. The nearest uninhabited island is 690km away! The only native inhabitant is none other than the amazing polar bear. It definitely deserves our respect of surviving in under such harsh conditions! In view of this I decided to take up the challenge to do the polar bear plunge that is jumping into the icy blue waters under 10m of thick ice which was opened up by the icebreaker. At GPS co-ordinates showed N89o59” it was a 4,000m deep ocean with minus 1.7oC cold water, what a great challenge!

It was 11am at the North Pole and the surface temperature is minus 3.8oC. The crowd kept on encouraging and cheering the challengers while the workers continued clearing the ice sheets. As our captain signalled ready to begin, the atmosphere suddenly tensed up. As soon as the whistle blows, the challengers had to remove their clothes quickly, identify, buckle up the safety belt and immediately jump in the icy cold waters without any delay. Otherwise you would have been frozen by the winds. But some still chose to walk step by step, feeling the temperature and slowly dipping into the icy water.

Well, some people have also made a turn back at the last moment and that is natural reaction though. Under the cheers and encouragement of the crowd, some of them eventually made the jump. As I was considering, I thought to myself, even though it is cold out there it is the experience that I wanted most. When I saw the younger members of my group did the jump and also the quieter ones had the courage to buckle the safety belt, I was so inspired!

Without any second thoughts, I decided to do the jump. With the safety belt at least I know I won’t be swept away or even if I had lost consciousness, I would be pulled to safety. As soon as the safety belt was buckled up, my mind turned blank and I only knew that I fell into the blue icy water crashing like salt in the coca cola. After a few seconds when I surfaced above the water, my limbs felt like bitten by millions of ants. Under this rapid contraction, I felt so numbed. I closed in very calming towards the ladder and slowly climbed up to the deck. YES, I did it! I did the jump into the North Pole Arctic Ocean!

In fact, hundreds of years ago, geographers and polar explorers risked their lives conducting research on the mysteries of the earth and discovered the North Pole 90oN. They are the real heroes. 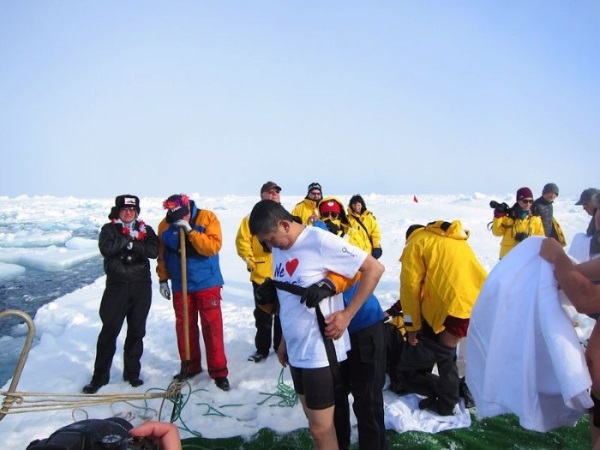 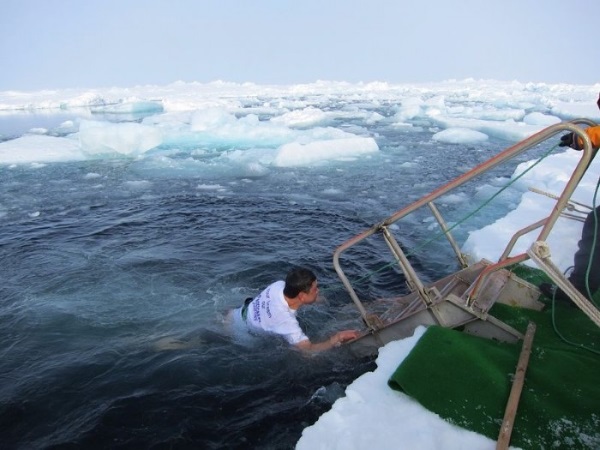 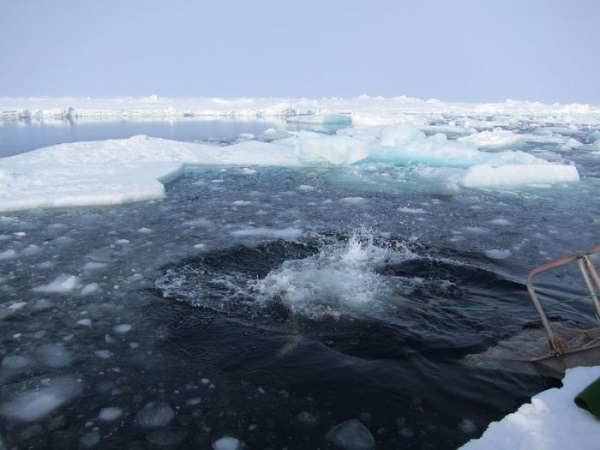 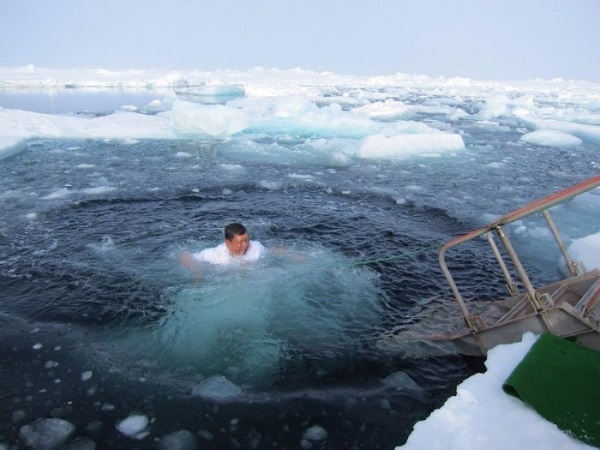 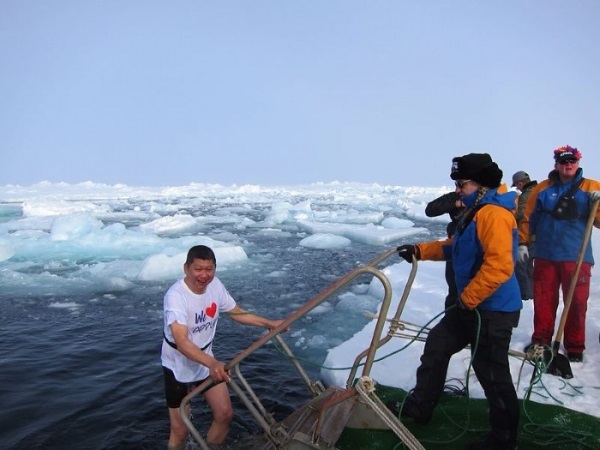 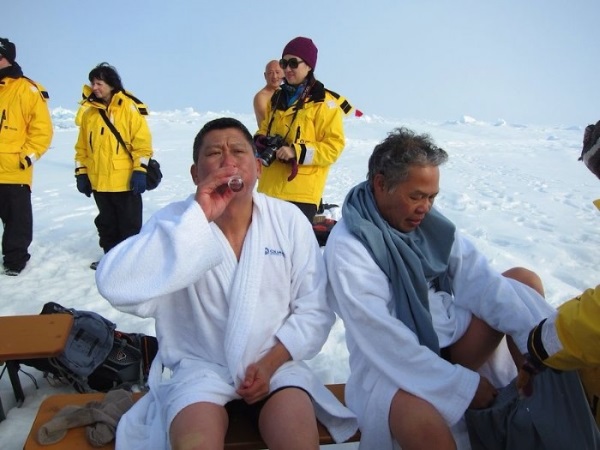 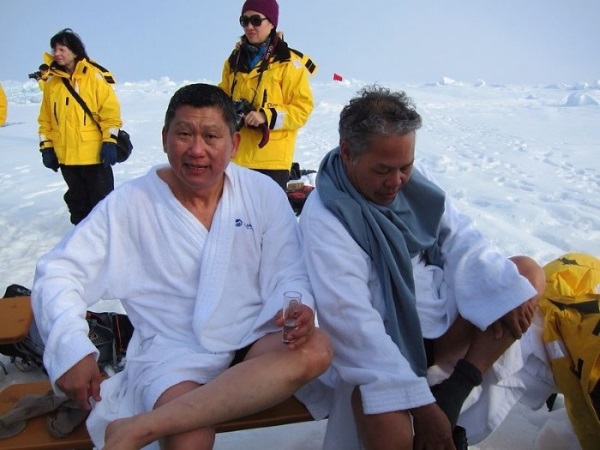 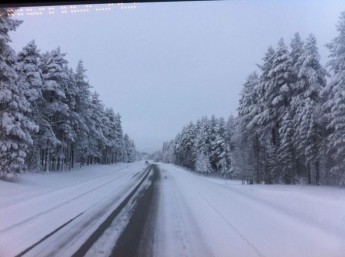