Tours and detours – Core and more

Apple Vacations has grown from a small business focused solely on tour packages into a group with diverse interests by slowly expanding from its core business into related fields like F&B, hospitality, cargo space and more. 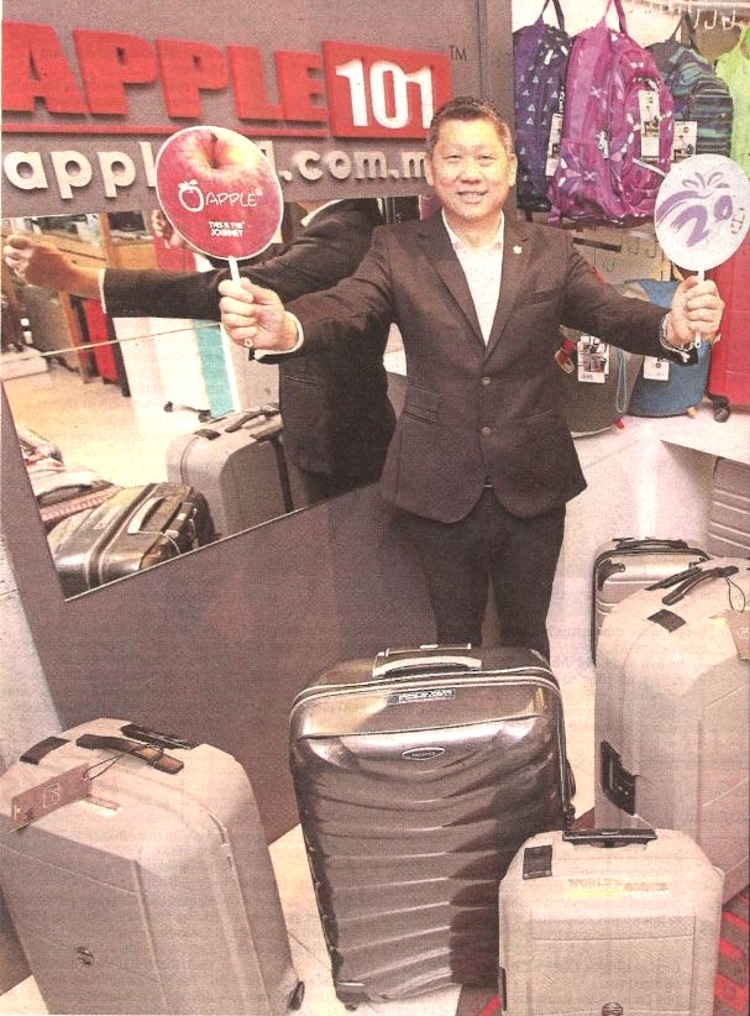 JAROD LIM reports
APPLE Vacations and Conventions has come a long way since its humble beginnings as a little travel agency in 1996.

The company, which thinks of travelling as “a journey, not a destination”, recently celebrated its 20th anniversary, having evolved into a more versatile outfit — a travel consultancy that offers comprehensive travel services.

“I am proud of the branding that we have achieved in the tourism industry. It’s just like what Maggi is to instant noodles, and Pampers to diapers — when people think of travelling, they will think of us,” he says at the company’s headquarters on Jalan Sultan Ismail, Kuala Lumpur. 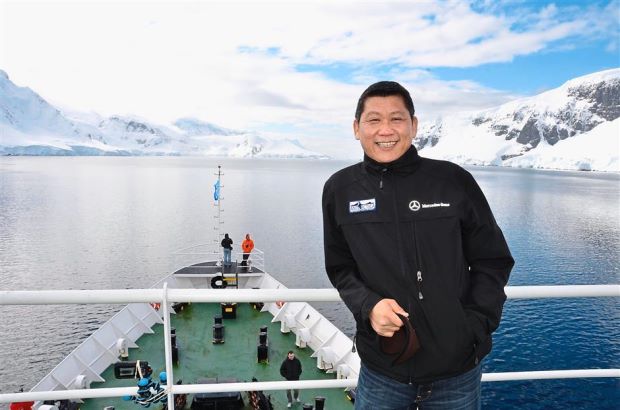 Lee’s business is travel, and he also likes to travel for leisure, including to the Antartica.

Lee observes that the company has grown along with its consumers in terms of how travel is viewed and practised.

“We can see the method of travelling has changed drastically. Previously, travellers always think of destinations like Japan as luxury tours, while others might spend one week going around the entire Taiwan island.

“But this started to change when we introduced thematic and in-depth tours, and this has changed the way travellers explore other countries. 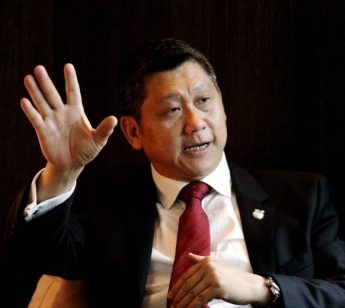 When people think of travelling, they will think of us,” says Lee

“In the case of Taiwan, for example, I think they can visit the country four or five times by going to different cities,” Lee says, adding that each trip would be a little different.

Lee and his partner, Datuk Seri Koh Yock Heng, founded Apple Vacations at a time when the market already had several big and established players. But even as they went about making a name for themselves in the travel industry, the two ventured into different businesses as well, including in aviation, hotels, property, advertising and media, and food and beverage via subsidiaries held under Apple Resources Holding.

In the advertising and media segment, Apple 101 runs an online travel magazine offering travel tips and destinations, with readers also able to shop, redeem vouchers and book hotel rooms through the website. 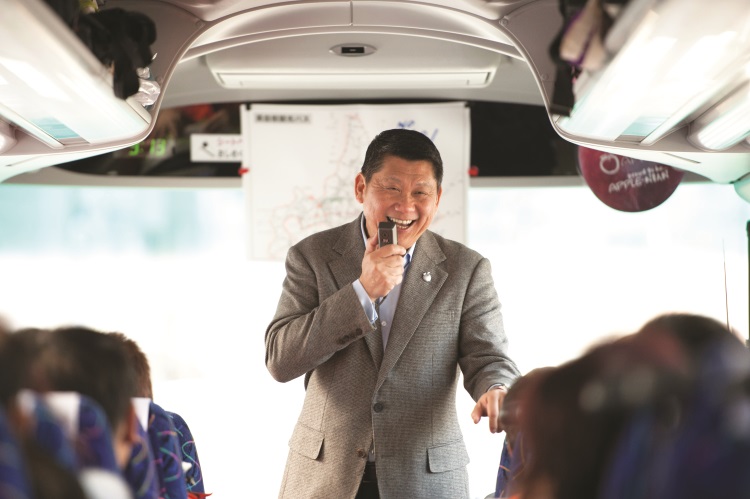 Lee, who is fondly known as Lee San (a Japanese honorific he earned for the work done in the Land of the Rising Sun), says Japan tours are the company’s mainstay. Having studied in Japan for six years prior to founding the company certainly helped him to understand what Japan had to offer.

“For the Japan market, we capitalise on its culture and uniqueness. When we talk about snow in the winter, lavender in the summer or the onsen (hot spring), we know these will not fail us. This keeps us confident about selling the tours,” he says.

“It is also something that our brand has fulfilled. We are known for offering thematic and in-depth tours, especially to Japan,” he stresses.

At present, Apple Vacations commands a 20% market share for tours to Japan. 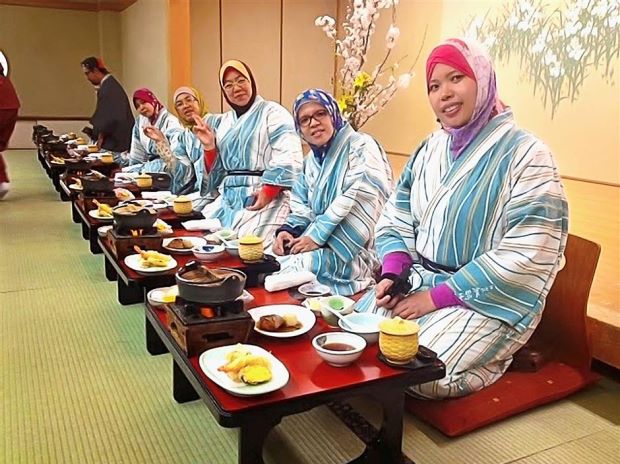 The company caters to Muslim tourists to Japan too.

“Prior to the exemption, we actually had 40% market share, but this does not mean that our customers have reduced. It’s just that there are simply more budget flights to Japan, hence more budget travellers.

“But they do not fall into the company’s customer categories,” explains Lee.

“Overall, our customers have increased. One-fifth of Malaysians going to Japan travel with us,” he notes.

“In Malaysia, we offer some of the most expensive tours but with quality guaranteed. If you are tired of budget travel, it’s high time for you to come to us for a pampering tour,” pitches Lee.

Speaking of travelling trends, Lee says travellers used to be happy just to explore the attractions of a country without really bothering too much about food or accommodation. 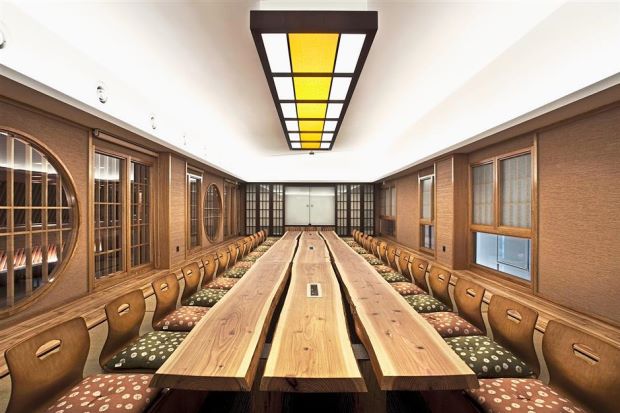 Japan is a big market for Apple, so it’s not surprising that the fourth floor of the company’s HQ has a Japanese-themed meeting room.

“Now, people think differently. They see travel not as a ‘mission’ but as a leisurely activity. They want to enjoy better food and comfort. We have thought about introducing more special tours, such as museum visits and trekking trips, to Malaysians but, unlike the Taiwanese, we still don’t have that kind of market.

“These kinds of tours will create a lot of awareness among travellers on specific subjects, and the expectation is different,” he says.

Nonetheless, Apple Vacations is continuing to push new travel experiences where it can. A few years ago, it worked closely with tea specialists and started tea tours to Southern China to educate travellers on the origins of the tea.

These tea tours are still ongoing, and the company also intends to add special tours revolving around coffee to Taiwan and Central America soon.

Lee says he is looking forward to introducing more exotic tours such as to the Galapagos islands and the Amazon River, as well as to organise more chartered flights for tour package buyers to other countries. 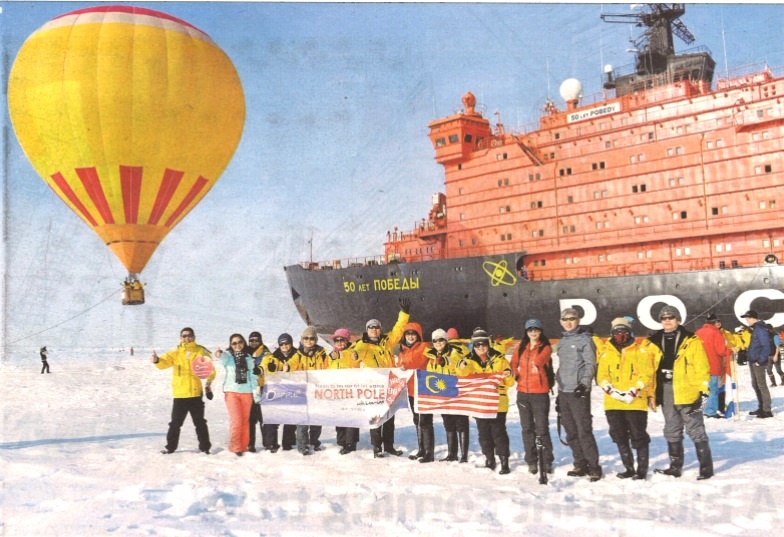 A tour to the North Pole?Yes,they do that too.

Moving forward, Apple Resources Holding expects to list its travel business by the end of the year and is looking at building more boutique hotels in Kuala Lumpur, Malacca and Penang. 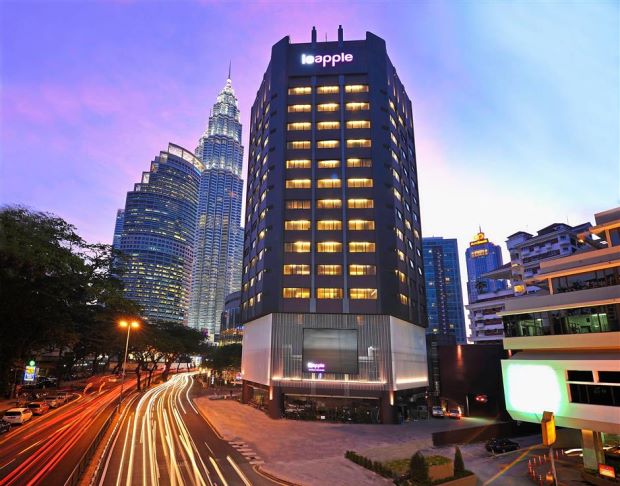 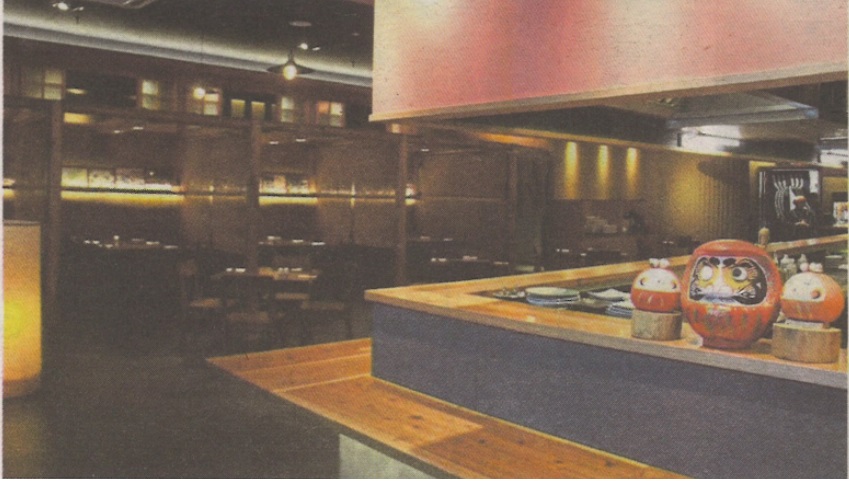 “We have chartered flights from Malaysia Airlines for about 282 travellers of different group tours to Hokkaido.

Apple Resources is also invested in the mega-project Impression City, a joint venture with Yong Tai Bhd that combines the draw of a new tourist attraction and property development.

Located in Kota Laksamana, the project will be carried out in 11 phases with total gross development value (GDV) estimated to be around RM5.4bil over a period of eight to 10 years. It includes Impression Melaka, the largest performance theatre in Malaysia that features a 360° rotating auditorium with the Straits of Malacca for background and with state-of-the-art lighting and audio technologies as well as modern art concepts.

Artist rendition of the Impression Melaka.

Impression Melaka is expected to kick off in 2018 and has an estimated GDV of RM729mil.

Created by the directors of the 2008 Beijing Olympics, Zhang Yi Mou, Wang Chaoge and Fan Yu, it will be the first live Impression Series show to be staged outside of China.

“We diversified into property development one-and-a-half years ago, and this will combine the downstream and upstream of the tourism industry.

“After we are publicly listed, we will collaborate closely with Yong Tai. We will introduce our travellers to Impression Melaka and make Impression City a one-stop tourist spot,” Lee says. 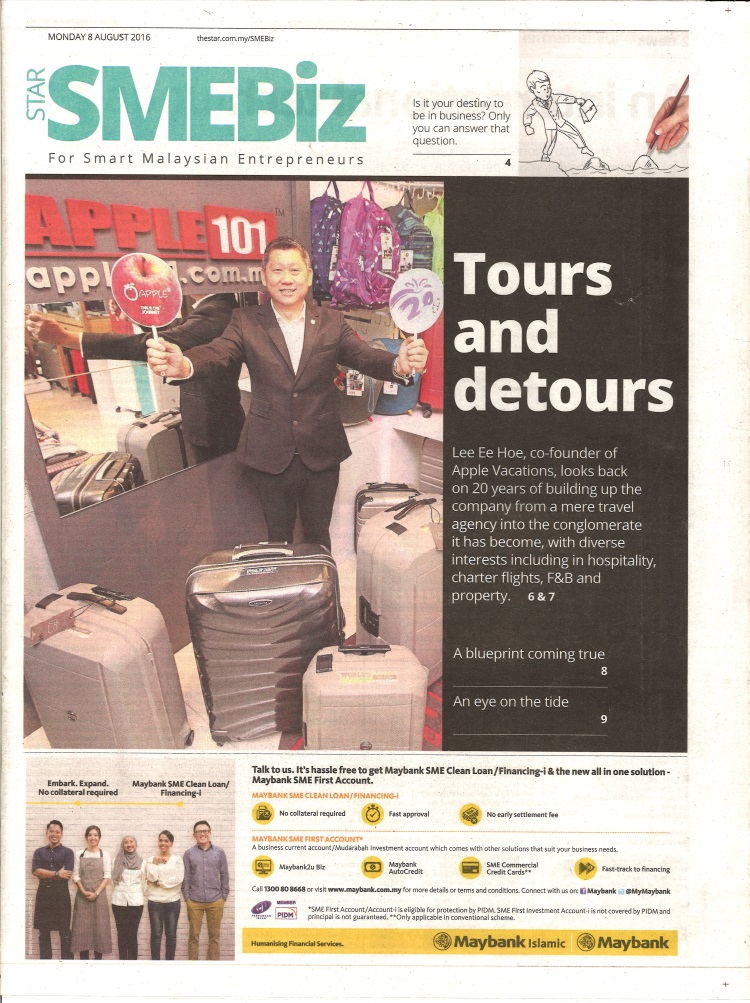 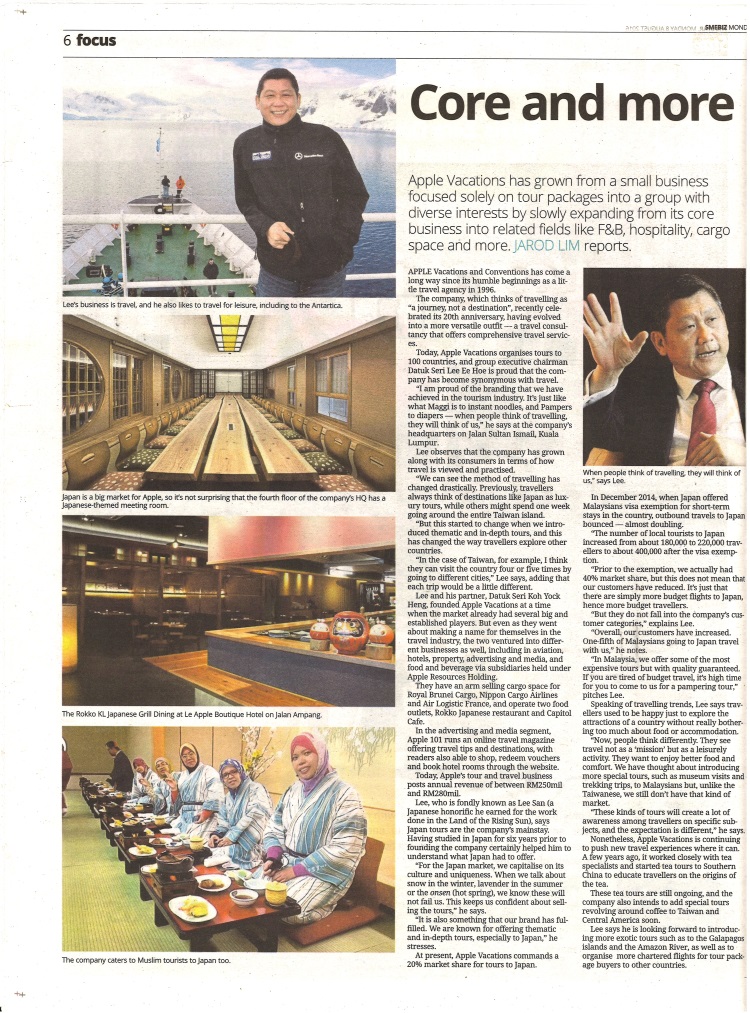 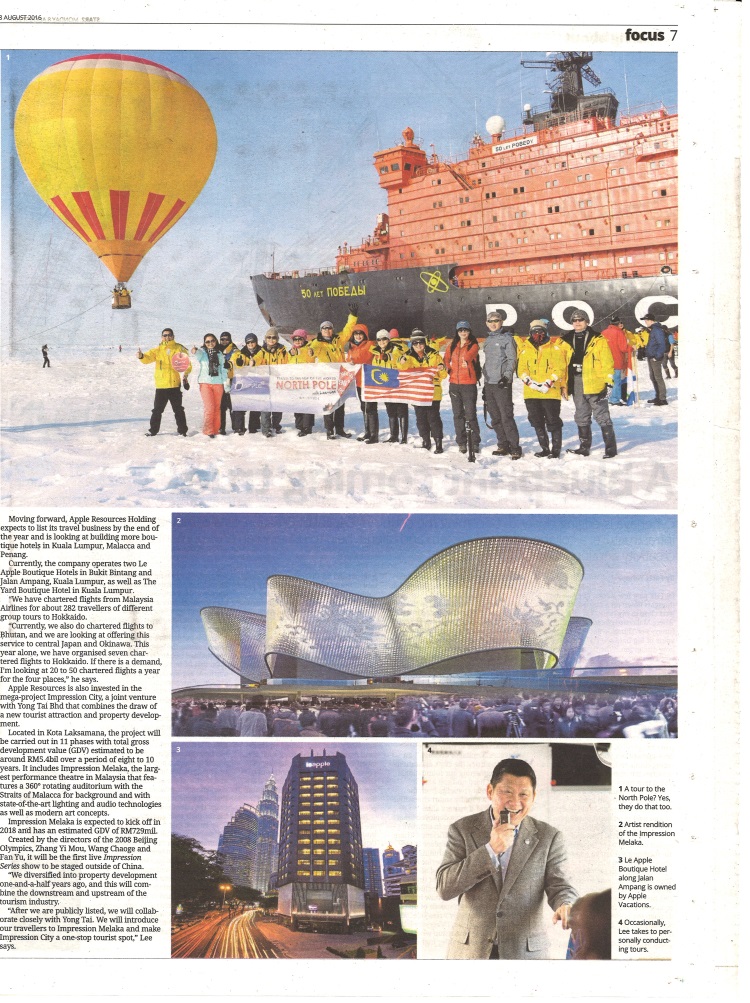