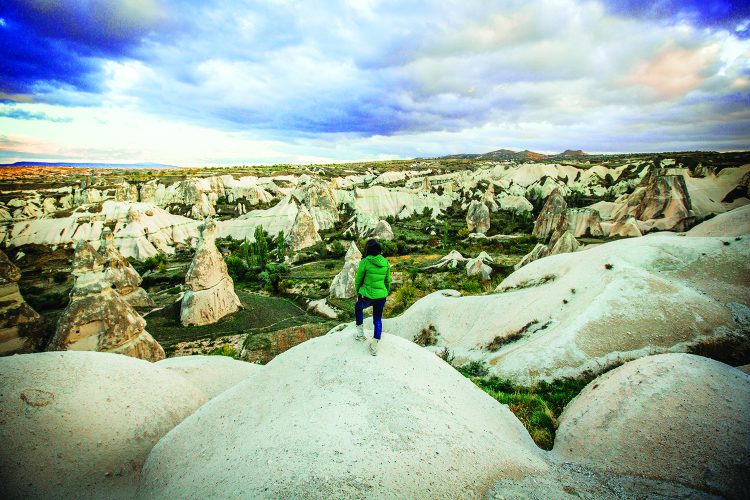 Cappadocia is famous for its moon-like landscapes.

Cave-dwelling is just a pre-historic practice that could only be comfortable for the Flintstones… or so we thought. Spending a night in a cave sounds more like an ordeal than a delight.

However, in Turkey’s Cappadocia region, living in caves is far from extraordinary and can even be luxurious.

In this region, volcanic eruptions covered the ancient land in thick ash, which turned into a soft rock surface called tuff . Eroded by time and the elements, the landscape morphed into something akin to the surface of a distant planet, with all shapes and sizes of cones, chimneys, mushrooms, pillars and pinnacles.

These formations have been transformed by human hands and carved into homes.

Dating back thousands of years, they housed the Assyrian, Hittite, Byzantine, Seljuk and Ottoman civilisations and even some Turks today.

According to Erdem Alagoz, an Istanbul-based tour guide at Renk United Travel, about 1,000 people reside in these grotto abodes in Göreme alone, a small town in the Cappadocia region with a population of around 10,000. 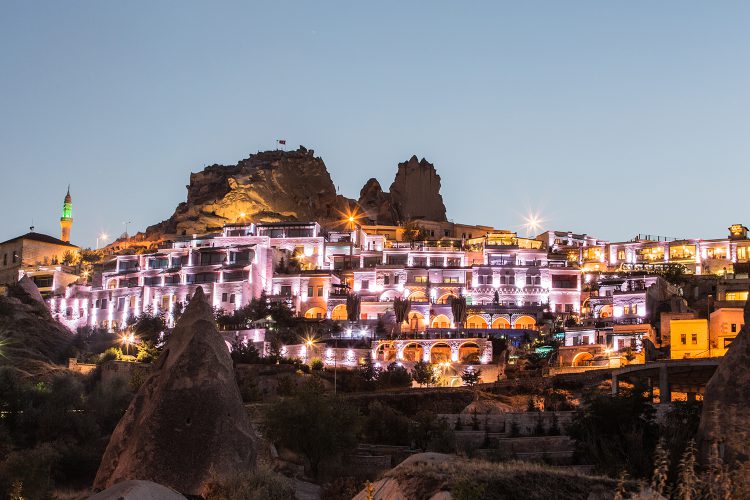 The booming tourism sector has spurred the growth of cave themed hotels in Cappadocia.

Formed by volcanic rocks and crafted by human hands, these cave houses have been home to many since thousands of years ago.

“A lot more people here [in Göreme] were staying in these cave houses, before the government began evacuating some of them in the 1970s when erosion triggered rock collapses and made their ancient homes unsafe to live in,” says Erdem, who has been in the tourism industry for over 20 years.

“The government gave some of these people land close to the caves they used to live in, to build new homes,” he recounts.

Although most of the cave homes have been left vacant since, this distinctive and unusual feature of the place has drawn a rising number of tourists. Smart entrepreneurial minds have transformed some of these cave houses into modern homes, shops and boutique hotels.

This trend of converting the stone abodes into modern-day homes and hotels started around 10 to 15 years ago, says Erdem.

With the revival of these unusual accommodations, he estimates that the value of a cave home in the tourism hotspots of Cappadocia has skyrocketed 20 times over. 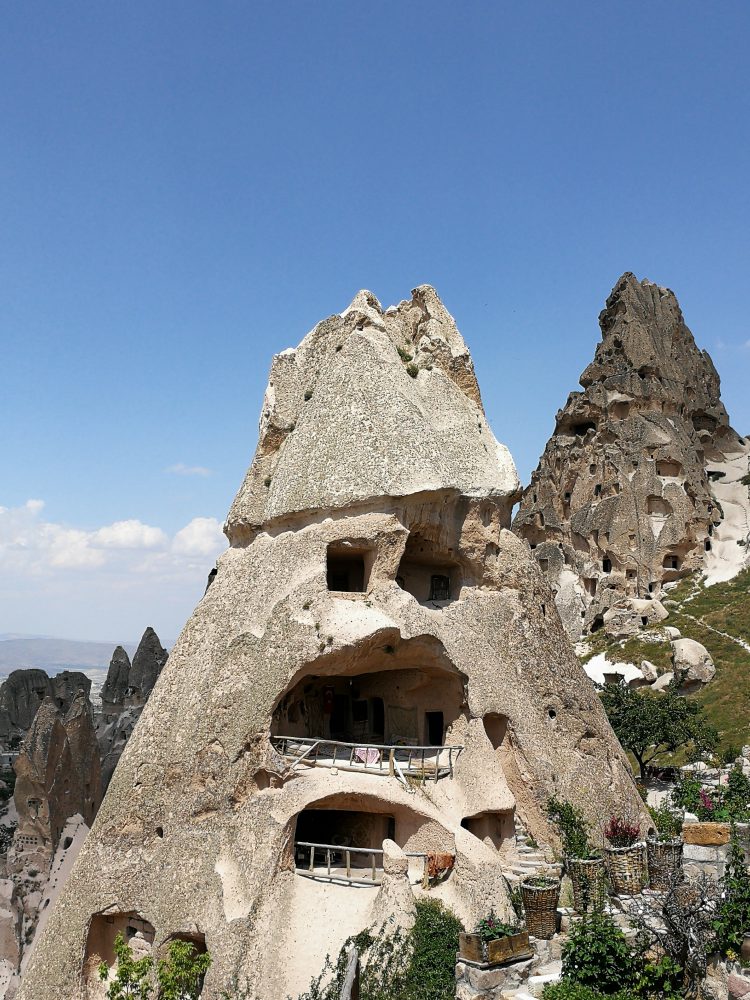 Listings on Cappadocia-based real estate agency Belit International Consulting Ltd show that the asking price for a 209-year-old, eight-bedroom cave house in Ürgüp, a town in Cappadocia, is £62,000 (RM329,714).

In towns with more tourist traffic, prices are steeper. A restored cave house in Göreme with just one main bedroom is listed on real estate portal www.uniquedwellingsforsale.com for 121,000 Euros (RM571,200) while over in Uçhisar, another town where tourism is booming, a regular cave house with a built-up area of 200 sqm could fetch as much as US$200,000 (RM800,988), according to a resident there. 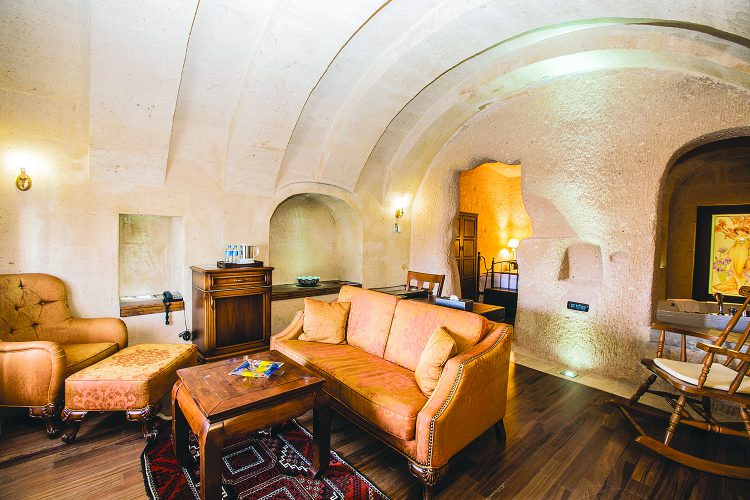 Many cave houses are being converted into fancy holiday homes while preserving its own structure.

From cave homes to cave hotels
Located at the highest point in Cappadocia and just 4km away from Göreme, Uçhisar off ers a magnificent aerial view of the region.

Its strategic location has spurred the growth of boutique hotels made up of the cave houses located on the undulating hills as well as in the town centre.

In fact, there are no fewer than 40 cave-themed hotels in this small town that only has six main roads!

Cappadocia Cave Resort & Spa was one of the earliest such hotels. Founded by general manager Mustafa Çankaya in 2006, the award-winning hotel consists of 121 rooms with built-ups from 27 sq m to 149 sq m. It boasts a wide array of facilities, such as a heated indoor swimming pool with panoramic views, Turkish baths, a salt therapy room, a restaurant, and a wine house. On top of that, guests can wake up to an amazing view of hot air balloons gliding through the morning landscape.

No one who steps foot into the hotel for the fi rst time would guess that the hotel used to comprise several cave houses. They were acquired by a businessman from Istanbul, Mustafa Cankaya, to pave the way for the inception of his resort.

“About 12 years ago, when I was still a camera distributor, I travelled with a few dealers [to Uçhisar] and saw the area. It was a good area with good views, so I decided to acquire this site, which was home to a few cave houses, and build a resort hotel,” says Mustafa.

The hotel started with 49 rooms and gradually expanded to 121 rooms, a few of which were converted from original cave houses.

“I’m thinking of adding another 20 rooms, but that’s probably in the future,” he says.

If you take a walk through the streets today, you will fi nd yourself surrounded by cave-themed hotels, and ancient cave houses undergoing renovation and restoration,some with a sign that says “satilik”, which means “for sale” in Turkish. 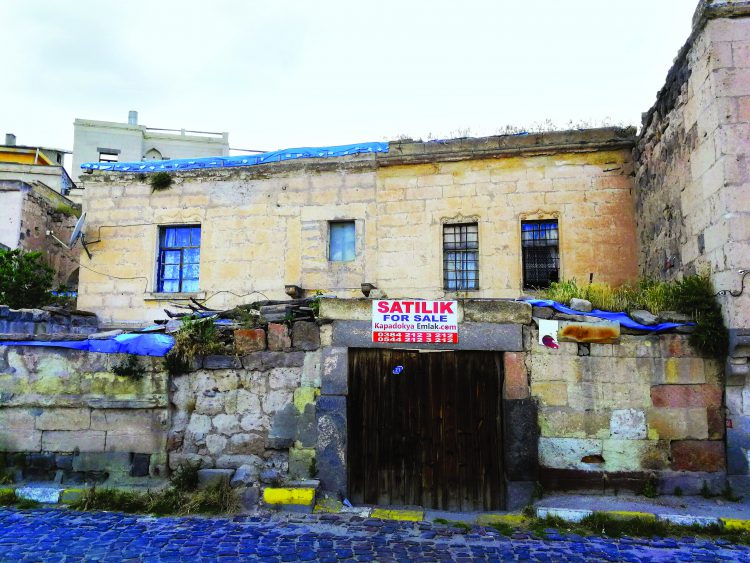 “Satilik” or “For Sale” signs are being placed on many ancient houses in Uçhisar. 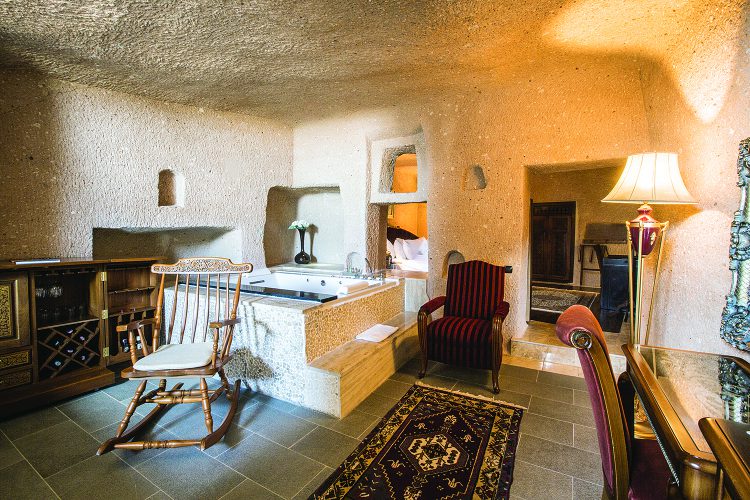 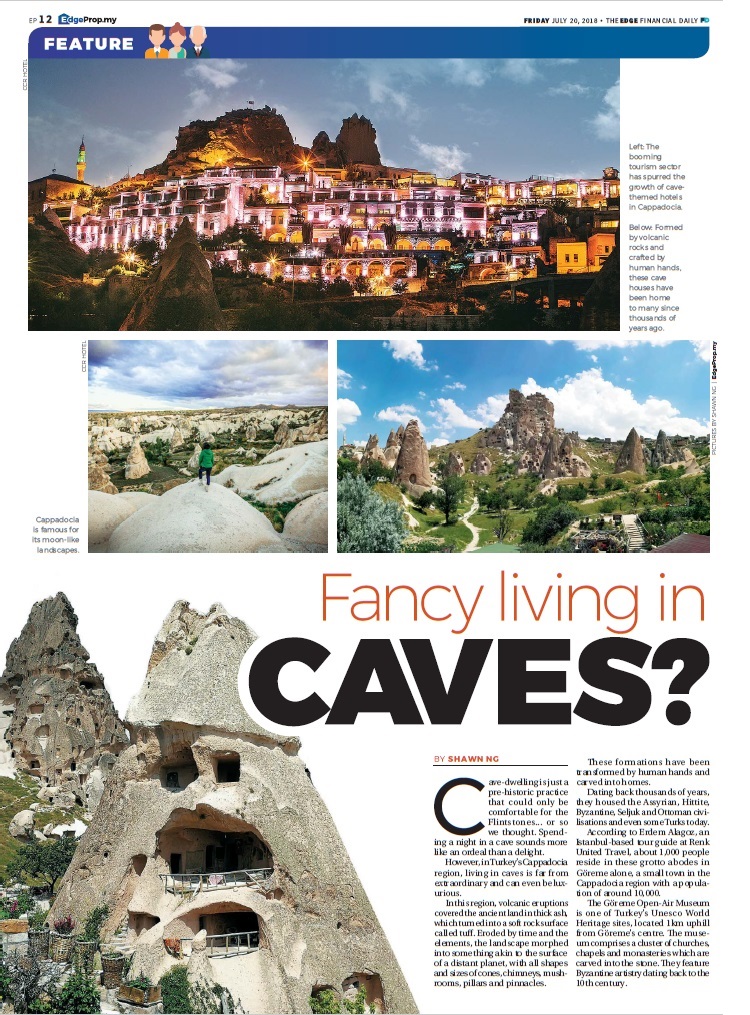 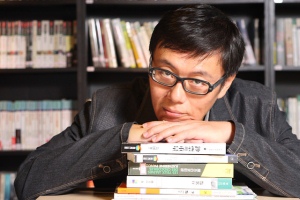