The curious things about Bhutan

The traditional Bhutanese buildings were built from stone, sand and wood. (Photos by Rachel Chew/EdgeProp.my)

The curious things about Bhutan

Text by Rachel Chew
Landlocked in the eastern Himalayas, Bhutan is a small country of only 38,394 sq km sandwiched between Tibet to the north and India to the south, east and west. To the west, Bhutan is separated from Nepal by the Indian state of Sikkim; and further south it is separated from Bangladesh by the Indian states of Assam and west Bengal. Due to its geographical location, Bhutan enjoys strong cultural links with Tibet.

The country’s landscape ranges from lush subtropical plains in the south to the sub-alpine Himalayan mountains in the north, where there are peaks in excess of 7,000m. The highest mountain in Bhutan is the Gangkhar Puensum, which is also a strong candidate for the highest unclimbed mountain in the world.

However, what makes Bhutan well-known may not be so much the untouched Gangkhar Puensum, but the first-of-its-kind Gross National Happiness (GNH) index. Bhutan made its name in the world as the first country that measures the happiness level of its people by using the GNH index.

According to the GNH Centre Bhutan website, the GNH Commission is the highest government body mandated to formulate and monitor policies. It is an institution that fosters a conducive environment and steers national development towards the promotion of happiness for all Bhutanese, guided by the philosophy of GNH.

The vision explains why the Bhutan government offers free education and medication to all its people to make a worry-free life possible in Bhutan.

The policy also shows that the government is taking the mental and physical health of its people very seriously, hence it is not surprising to know that Bhutan is the only country in the world that completely bans the sale and production of tobacco.

In a tag-along trip organised by Apple Vacations — the only travel agency providing chartered flights directly from Kuala Lumpur to Bhutan — EdgeProp.my was told that smoking in public places is considered a crime in Bhutan that could send you behind bars for three years! 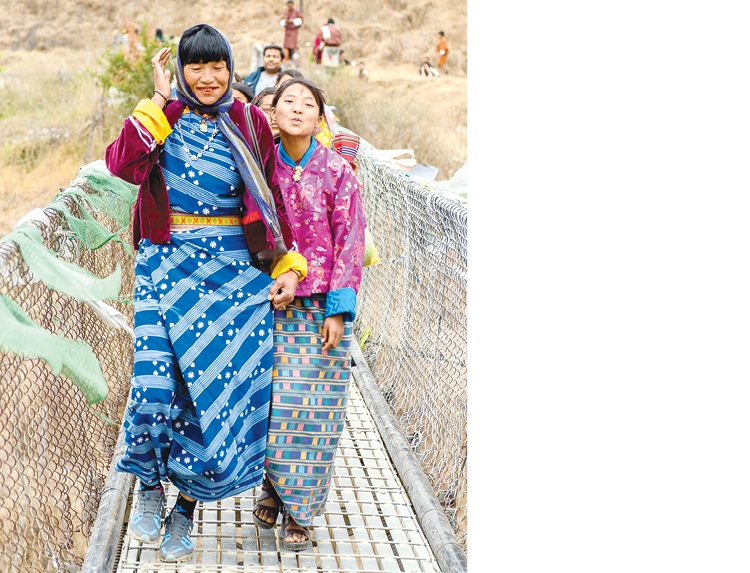 Girls from the Ngalops tribe walk along a bridge in Thimpu. (Photo by Anton Ivanov)

In addition, it was also learnt that Bhutan’s royal family and government strongly believe that keeping a balance of the natural and traditional, as well as modernity and westernisation is the secret in maintaining the GNH level. This is why the ban on television and the Internet was only lifted a mere 20 years ago.

The local tour guide of the trip, Sonam Phuntsho also reveals that the number of tourists is placed under strict control. The daily visa cost is US$250 (RM1,035) — the most expensive in the world. The US$250 covers a guide and a bespoke itinerary including transportation, accommodation, sightseeing, meals and US$65 daily government tax that goes to public services like education and health care.

So, do not expect to travel freely. Bhutan is not a budget destination or a place for backpacker-style drifting.

Nevertheless, the harsh travel regulations have not deterred tourists. In fact, it has made Bhutan one of the most exclusive destinations which many travellers are dying to visit, thanks to the fact that it is one of the few countries in the world that is not only carbon neutral, but carbon negative. It literally means that every breath you take is pure, clean and fresh oxygen.

The abovementioned facts are just the tip of the iceberg about Bhutan, under which lies many more curious practices.

Bhutan is a tiny country compared to its neighbours — India and China, so much so the joke is that everyone knows each other in Bhutan.

Though there are newer buildings that are given numbers, the majority of the buildings still use the traditional address format. Of course, it is easy to spot a landmark such as the Le Meridien Hotel, as it is the only 5-star hotel in Thimpu. But how about a normal house?

The address format is the same but most mail senders will include the recipient’s full name and phone number in case the house can’t be found, so that the postman can call and ask around. 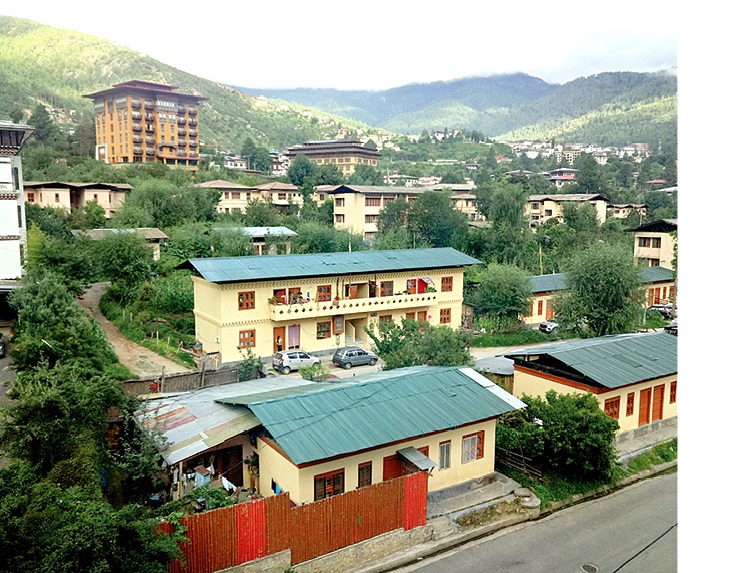 A view of Thimpu city.

2 No factory and slaughter house in Bhutan

Buddhism is the official religion of the country, embraced by 80% of its population.

In line with the religion’s No 1 precept against taking life, the country has banned slaughter houses. However, people are free to choose to consume meat. Meat is also sold in the market. According to Sonam, most meat is imported from India.

Besides slaughter houses, factories are prohibited too. Industrial activities are banned to keep the environment and air free from pollution. Hence, most of the manufactured goods in Bhutan are imported.

3 Only Bhutanese-style buildings are allowed

Bhutan was united by a Tibetan, Zhabdrung Ngawang Namgyal in 1627. He was also the man who introduced Buddhism to the country. The historical connection explains the similarities between Tibet and Bhutan in terms of culture, language, food and architecture.

A few special features mark a typical
Bhutanese building. Most of them are built using only three natural resources — wood, stone and sand; walls and pillars are usually painted or carved with Buddhist tales or symbols; and windows are maximised to encourage natural light and airflow.

These traditional buildings’ DNA can still be seen even in Bhutan’s modernised structures. In fact, a law decrees that all buildings in the country including new ones must incorporate traditional Bhutanese elements, at least on the exterior. This is intended to preserve the tradition and let the buildings tell the story of the country.

4 No building can go beyond six storeys

Thimpu and Paro are the biggest cities in Bhutan. Both cities are modernised. You can find western restaurants and cyber cafes easily. Most of the foreign corporate offices are set up here.

Nonetheless, there is no skyscraper in the cities, in fact, not even a tall building because no building can go beyond six storeys in the country. One reason is because Bhutan is earthquake-prone — in 2009, the kingdom was hit by a 6.1 magnitude earthquake. Most deaths occurred when houses collapsed on the victims. Since then, a regulation has limited all buildings to within six levels. 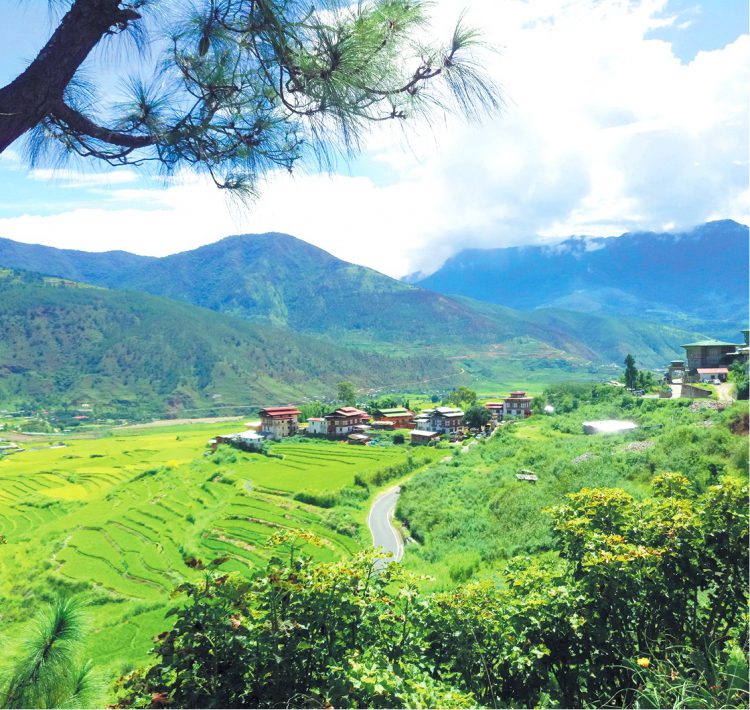 The country’s landscape ranges from sub-tropical plains in the south to sub-alpine mountains in the north.

5 Foreigners own no land nor property

Bhutan is taking its time to open up to the world as it prioritises culture preservation and the happiness level of its people.

It is not possible for a foreigner to own property in Bhutan. According to Sonam, no foreigner can own any immobile asset in the country. One may rent a house or office but can never own one.

Even if you want to do business there, you may think twice as the initial investment and compliance cost may put you off. For foreigners who wish to do business in Bhutan, a joint venture with a local party is a must. The investment proportion is between the two parties but one thing for sure — the foreigner will not be owning any asset, land or building in the country, no matter how much he or she has invested in building one.

6 No housing welfare in Bhutan

With free education and basic public healthcare, we may think the government would also take care of the people’s housing, but it does not.

According to Sonam, the government of Bhutan does not provide any housing subsidy to the people. Land and houses are traded in the free market.

Property development is not a big industry as most Bhutanese still prefer to buy a piece of land and build their own home. However, more low-rise apartments are coming up. In building their own homes, they will have to purchase building materials, such as wood and limestone from the government. Supply of the desired quantity depends on the current reserve.

Bhutan’s tourism website shows that the government has enacted a law to maintain at least 60% of its forest reserve at all times. As at August 2018, there is 72% forest coverage, reveals Sonam. 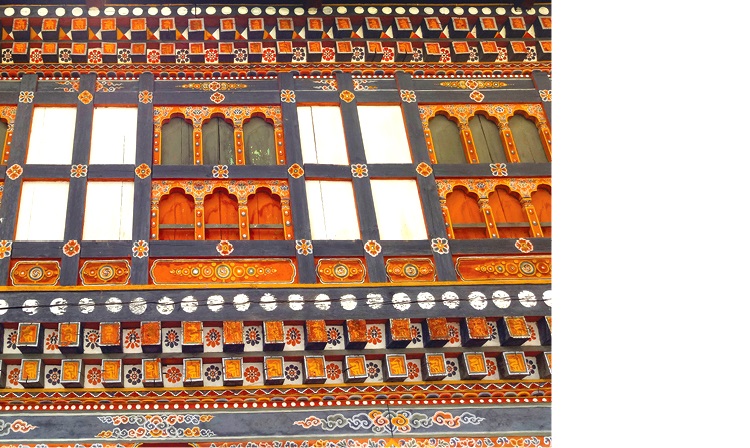 Many traditional structures are built without using a single nail.

7 One of the world’s most dangerous airports

According to Paro Airport’s website, it is the only international airport of the four airports in Bhutan. It was the first and only airport in Bhutan until 2011.

The airport has been ranked as one of the most dangerous in the world by engineering website — www.interestingengineering.com.

The website stated that pilots require a special certificate before they are allowed to land at Paro Airport due to its complexity — it has a short runway of 1,964m and is surrounded by 5,500m peaks.

The visit to Bhutan was courtesy of Apple Vacations which is organising the next chartered flight and tour to Bhutan in December. 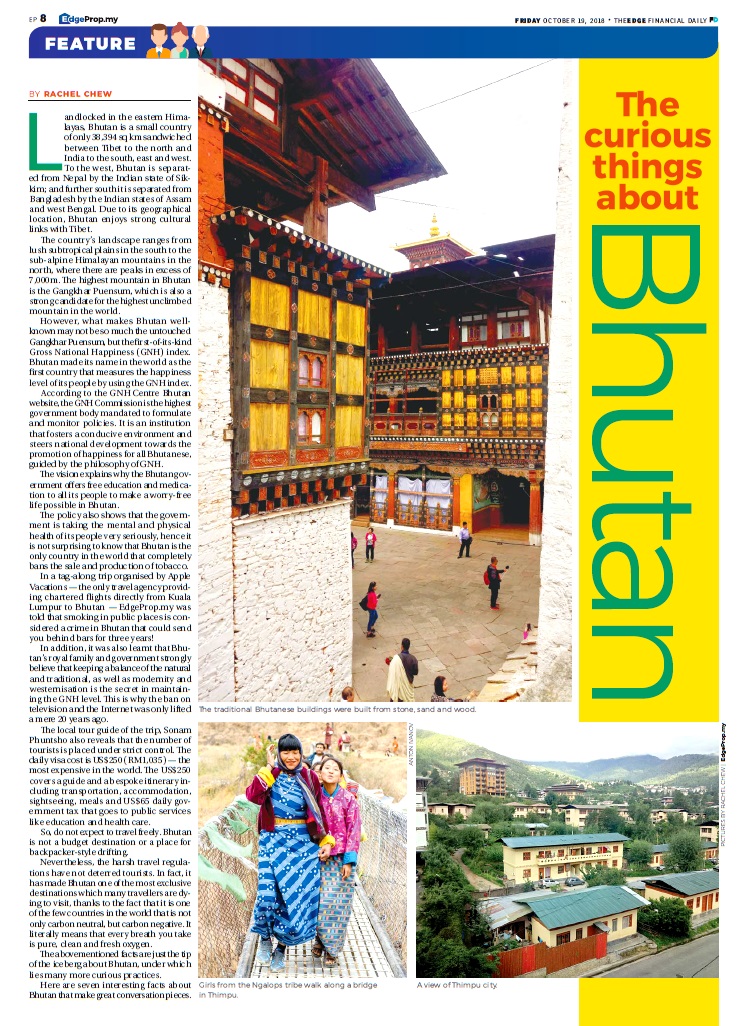 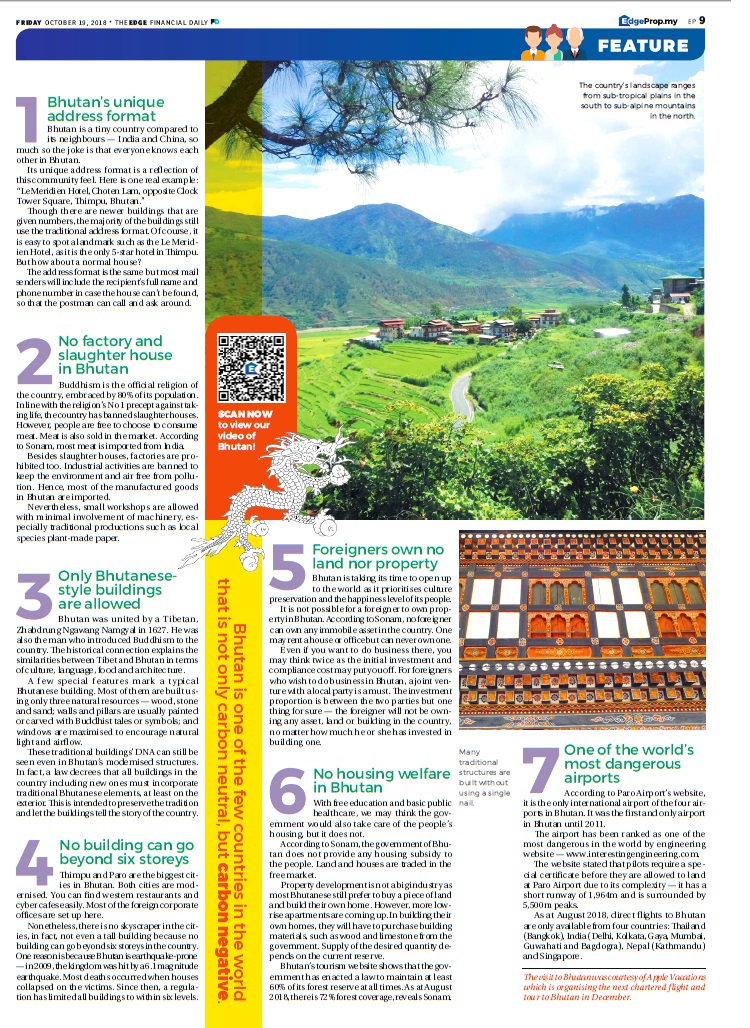 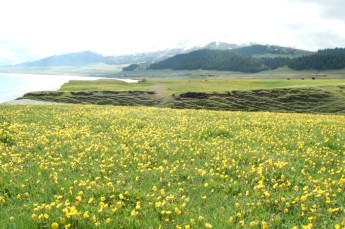