In today’s geopolitics, it would be the United States who seem to be terrified by the rise of China’s economic and technological power and perceive the country as a “wolfish threat”. But many other nations have a different view. To them, China is the golden goose whose citizens can bring tremendous economic benefits as tourists.

Unfortunately, our country isn’t one of these nations. Our government can’t seem to make up its mind as to whether China is a wolf to be feared or a golden goose that will lay lots of lucrative eggs for us. While Putrajaya recognises China as Malaysia’s biggest trading partner and says it wants to attract more Chinese tourists, concrete action still lags behind.
News agencies recently reported that Malaysia has expanded its Visa-on-Arrival (VOA) facilities to 13 entry points to ensure hassle-free entry for nationals from China and India, two of the fastest-growing outbound tourist markets in the world. But is doing this enough, especially since there are so many conditions to getting the VOA? I would say it is not. 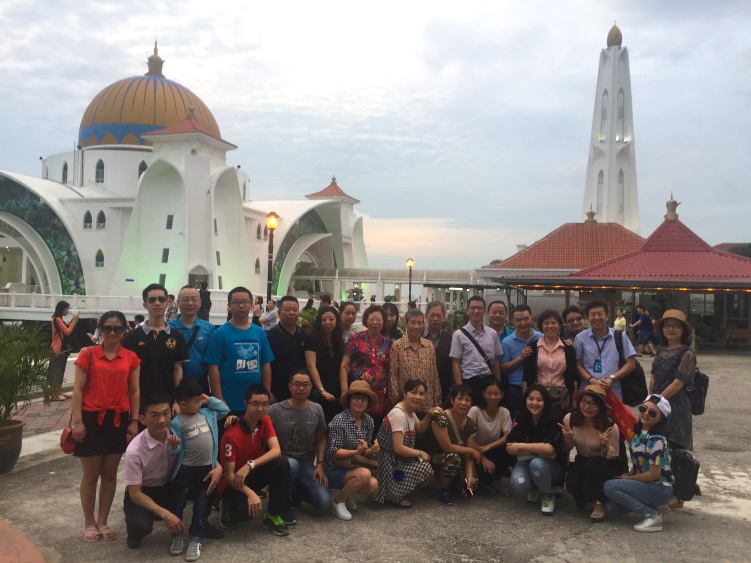 One of the fastest growing inbound tourism markets in the world today is China. The Malaysia government should do more to welcome Chinese tourists as their spending power is strong and beneficial to our tourism and retail industries. Photo by Leesan.

The latest country to roll out the red carpet for Chinese tourists is Iran. Its government implemented a new visa waiver programme for Chinese visitors last month in a bid to attract up to two million tourists from China within the next 12 months. This was done in response to Iran’s failing economy which has been badly hit by US sanctions.

The Islamic Republic News Agency reported in late June that Tehran had passed a regulation to cancel visa formalities for Chinese nationals, at the suggestion of the country’s Foreign Ministry and Cultural Heritage, Handicrafts and Tourism Organization. Previously, Chinese tourists could apply for a 30-day VOA.

I applaud the decisions of the Iranian government because it is an effective step to help increase the number of Chinese tourists arrivals into their country. Iran is not alone in recognising the power of tourism in helping to boost its retail economy.

Japan, under its “Abe-nomics” policy, unconditionally welcomes tourists from fast-growing Third World countries for sightseeing and shopping, to spur its own economic growth. By just simplifying its visa application procedures for China citizens, the number of Chinese tourists entering Japan exceeds eight million people per year with a 15% growth.
In 2018, Japan received 31.2 million visitors, up 8.7% from 2017. And the momentum is growing to meet the goal of 40 million by 2020! Compare that to the 6.5 million inbound tourists in 2012.

Today, Japan is one of the countries with the highest growth rate of tourists. This tremendous result is because of Japan’s friendly visa policies.
Closer to home, Indonesia, too, has granted visa exemption to China passport holders, permitting them to enter the country freely through any of its 124 designated border crossings. They are welcome at all times. Hence most of the China companies choose Bali as their incentive tour destination. 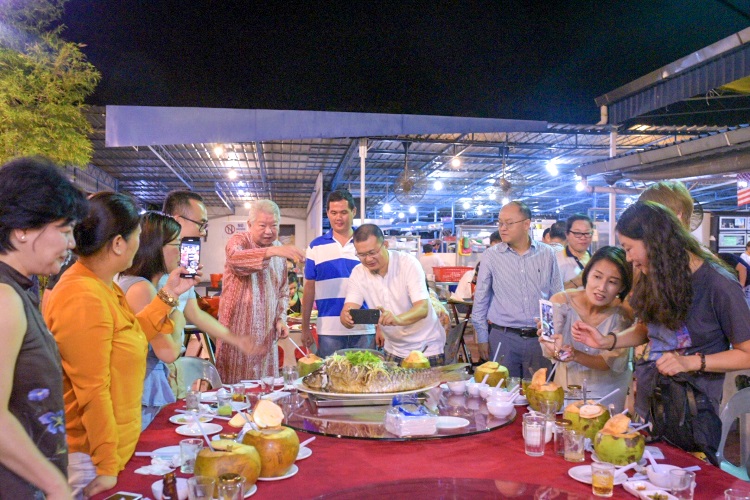 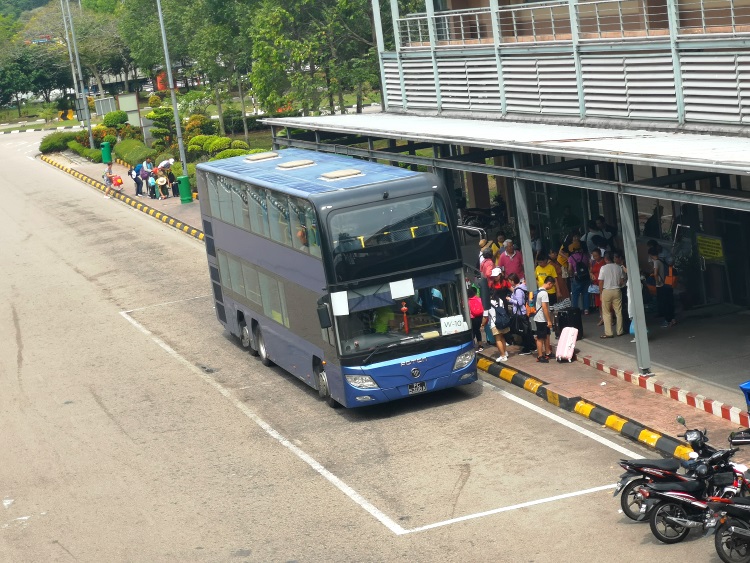 Tourists at the Tuas immigration checkpoint in Singapore, en route to Malaysia. It is not easy (or cheap) for Chinese tourists to get a Visa-on-Arrival in Malaysia. Photos by AIT

In contrast, Malaysia’s hesitation to waive visa requirements for Chinese citizens is based on the fear that they would overstay and work in the country illegally. Some say it is also because of security reasons.

That, to me, is a groundless fear. Iran, Japan and Indonesia have weighed the risks of overstaying Chinese tourists against the huge benefits of the Chinese tourist dollar. Guess which side is winning? In fact, the Indonesian government is looking at an even bigger picture and has introduced tourism-friendly policies in all directions.

Malaysia’s fear is like the Chinese saying “qi ren you tian” which means “the man from Qi fears that the sky will fall”. It comes from an ancient tale of a man from the state of Qi who was constantly worried about the sky falling and crushing him, or the Earth sinking and burying him under. He was so fearful of these things happening that he could not eat nor sleep. Finally, a friend manages to convince him that all his fears were groundless.

What is not groundless is the fact that our retail economy has also been sliding towards recession and the people are worried and deeply affected.

So many countries see the huge potential in welcoming Chinese tourists because China’s outbound tourism is growing rapidly and this influences regional and global economies. In the Travel China Guide’ statistics, it shows that in 2018, China outbound tourists were at 149.72 million, up 14.7% and expected a steady increase by double digits in the year to come.

With it, the Chinese passport has visa-free or VOA access to 70 countries with more opening up. In fact, China is hoping to be granted visa-free status from Malaysia. This year marks the 45th year of relationship between Malaysia and China.

Meanwhile, a visa is not required for a 30-day stay at Phu Quoc Island in Vietnam; and the Philippines offers free VOA with 14 days’ validity for the Chinese. There’s no visa required for them to visit Indonesia; while in Singapore, Chinese nationals would need a visa (costing about RM90) but the application process is very simple.

It is worth mentioning that all of the above-mentioned tourist-friendly visa policies are applicable to all passengers who take direct flights from their home country. 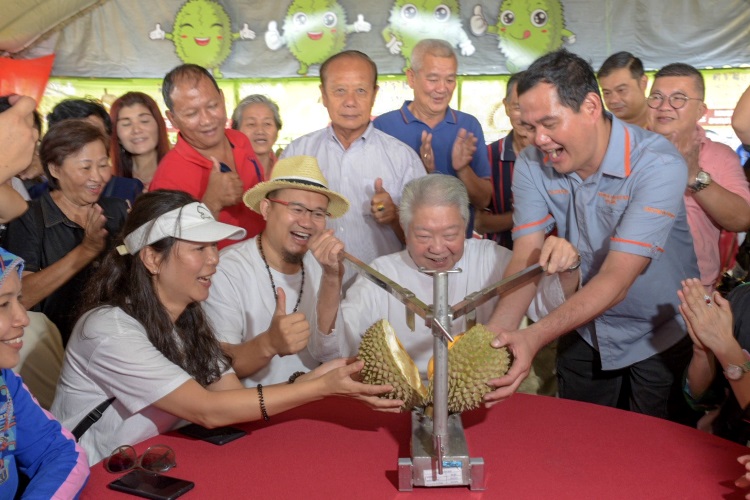 Chinese tourists are fond of the durian whenever they are in the country. Photos by AIT

Chinese nationals transiting through Malaysia to any Third World country must hold an onward ticket and the flight departing Malaysia must either be operated by AirAsia or Malaysia Airlines.

But if they hold a valid visa from any Third World country, they will be entitled to a free transit pass for up to five days. If they arrive directly from Indonesia, Singapore or Thailand and hold a valid visa for those countries, they can obtain a VOA in Malaysia for a maximum stay of seven days (which cannot be extended), at a fee of RM300 per person.

On July 19, our Home Ministry announced some improvements made to the VOA policies to China and India tourists. Here’s what’s changed: A period of stay from seven days to 15 days; VOA fees are now RM200 instead of RM300; increased entry points from seven to 13; valid to tourists entering Malaysia via Brunei, Indonesia, Singapore and Thailand. I am especially curious about this.

Normally, most countries are happier when they get tourists flying in direct from their home country, and there are two benefits to this.

Firstly, these tourists are “fresh” from home so they have more money to spend. Secondly, it helps local airlines with direct connectivity like Malaysia Airlines, AirAsia and Malindo. But why does our government “take the branch for the root” (a Chinese proverb that means to eliminate everything) and insists that this is an effort to boost tourist arrivals during Visit Malaysia 2020?

Why must we welcome tourists via a third-country route, instead of a direct flight? Is it supposed to be in the interest of national security and possibly to prevent illegal maids or workers coming in to Malaysia?

Asean might seem like a group of countries that are on the same page when it comes to developing trade, investments, tourism and other industries for the region. But is Malaysia sharing the same immense growth potential? The answer is no.

The Taiwanese populist Han Kuo-yu’s concept of, “If goods flow out and people flow in, we will become wealthy” is simple and straightforward, and easy to implement. Basically, the key to prosperity is to have a global macro strategy. So are we implementing this?

When it comes to connectivity, national airlines play a vital role. Indonesia’s national airline, Garuda, has transformed from one of the world’s worst airlines into one of the world’s top 10 best carriers. They haven’t had it easy, but it shows just how determined they are to succeed. Malaysia Airlines, on the other hand, is currently ranked 35th in the world and it has been struggling financially for quite some time. After numerous failed attempts at restructuring the national carrier, none of the plans seem to have been effective or even sustainable.

My guess is that the government will just continue to pump in more money into the airline to maintain status quo. The fact is, the bad score will affect Malaysia’s reputation and inbound tourism which are closely related and interdependent.

We know under the previous government, that tourism was viewed as a lucrative sector but lucrative for whom? Corruption, mistakes, oversights, poor decisions and lack of strategic marketing plans were made – all that must not continue.Instead, my suggestion to the current government is to offer a comprehensive visa-free policy once for all. Alternatively, grant a VOA for direct flights, with 21 days’ validity for just RM100. That will certainly help encourage the golden goose to fly and land on our shores!

Most importantly, it will boost the industry and help with the country’s major campaign next year, Visit Malaysia 2020, Truly Asia. 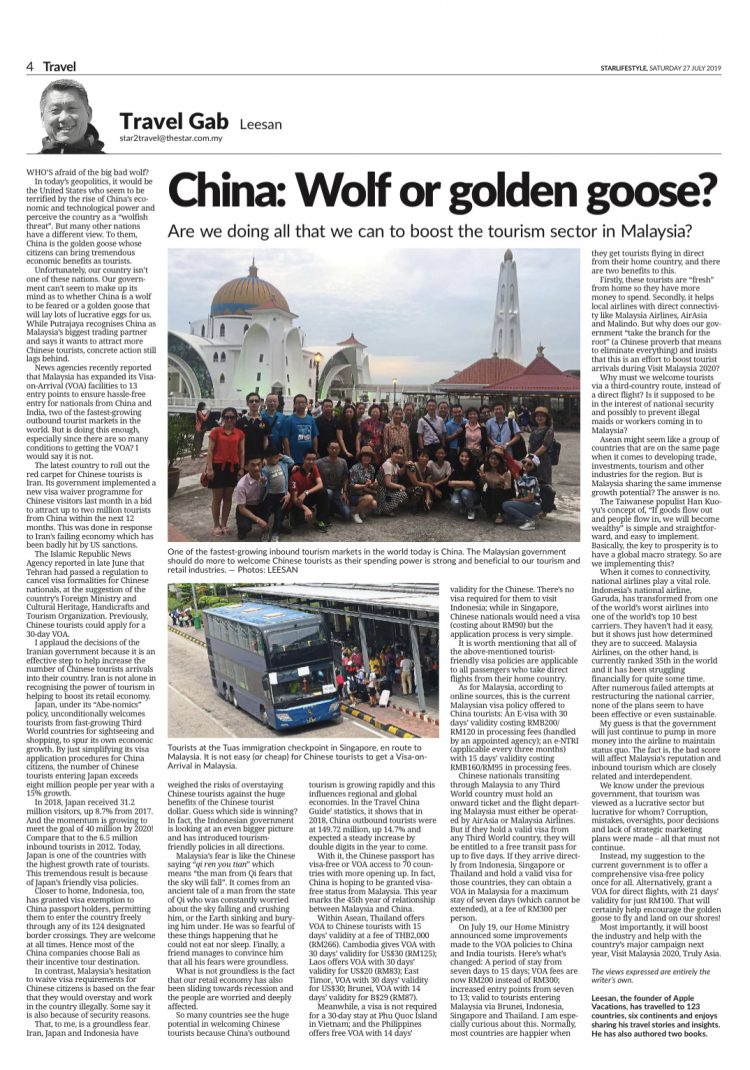