The end is not really that near – by leesan

To date more than 142 million people have been infected and 3.1 million killed globally. An estimated four million new cases are expected to be reported each week in the days to come.

The end is not really that near – by leesan

Our columnist, like so many of us, is getting tired of this pandemic. But what can we do?
THE United Nations World Tourism Organisation (UNWTO) once projected a 5% expansion in the number of tourists worldwide in 2020 – to more than 1.45 billion people – potentially shattering previous records.

No wonder countries across the world (before Covid-19, that is) kept purchasing new planes and tour coaches, building new hotels, resorts and theme parks, as well as opening up specialty restaurants and souvenir shops, all in anticipation of the explosive growth.

It was said that the tourist industry workforce had breached the 300 million mark globally at one point.

The great aviation graveyard: With the aviation slowdown in 2020, the aircraft graveyard, also called a boneyard, is packed with grounded planes. 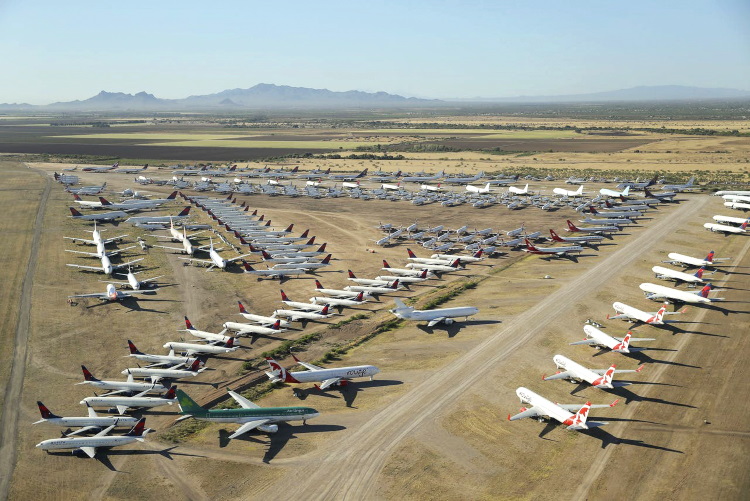 Still remember our own 2020 Visit Malaysia Year campaign? It seems like we just kicked off the campaign in a big way not too long ago, huh?

Unfortunately, the coronavirus started blowing up at the end of 2019, followed closely by the lockdown in Wuhan, China on Jan 23, 2020, marking the start of the virus’ unstoppable and very quick global spread.

The 2020 spring Chinese New Year tours were the worst-hit casualties back then.
Let’s have a recap of how the virus made inroads into our country.

After the sudden change in government administration, Malaysia went into its own “lockdown” on March 18. This was when the movement control order was enforced, which resulted in a ban on international travel.

This was the first of such “lockdowns” since the country’s independence more than six decades ago.

After 48 days, on May 4 the conditional MCO was introduced. Some rules were relaxed, while new SOPs were introduced.

On June 10, the recovery MCO came into effect, bringing with it looser rules and more economic recovery initiatives. Borders were still closed, but interstate travel was allowed.

People began to let their guards down as they went on holidays en masse across Malaysia, giving a bit of hope to those in the tourism sector.

Some outbound operators even made preparations to restart their tour packages, as they had hoped to see the autumn travel season open up.

But then the Sabah state elections took place in September, which unfortunately triggered a new wave of infections.

Nobody expected to see the drastic increase in cases, or that it would go on for so long.

On Oct 14, the country was placed under the conditional MCO again, though this time with a different set of rules from the first iteration.

By now the virus spread had slowed down a little, but the Malaysian political scene began to heat up. On Jan 12, the country went into a state of emergency, as declared by the government. It was quite a sudden move.

The next day, the MCO was imposed again and this time even more small businesses and struggling individuals became badly affected. For some, the MCO was a paralysing period.

Luckily on March 5, many states transited to the conditional MCO phase; some were even placed under the recovery MCO phase.

In summary, we have been put on “pause” so many times, it’s hard to see when things will finally improve. So far, the Klang Valley and a few other states have been under “lockdown” for more than 230 continuous days with no signs of when the ordeal will end.

More importantly, it is hard to see just how the tourism industry – not just in Malaysia but all over the world – is suffering from all this.

Holi Festival_Editorial: Mar 29 2021, Holi is being celebrated on this day across India. The festival of colours marks the arrival of spring and harvest season. Though the pandemic has dampened the spirit of Holi as there are some restrictions of huge gatherings, the zest and enthusiasm are the same as ever. 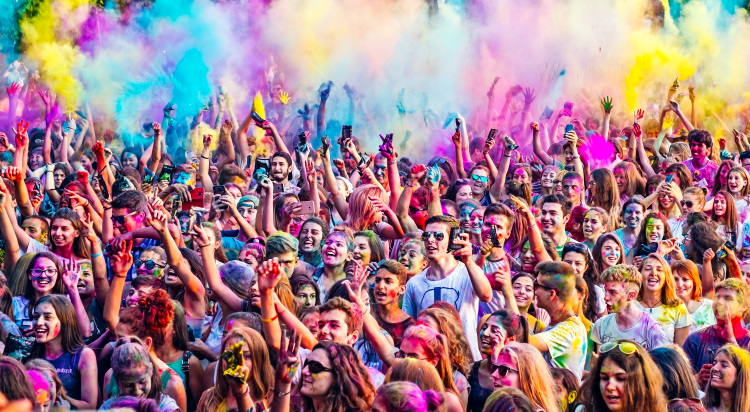 We are a drop in the ocean, the Earth is not as indestructible as you imagine. 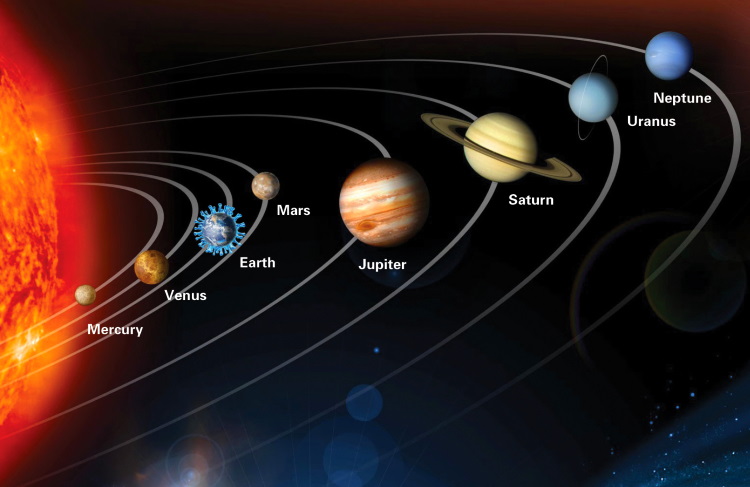 We are a drop in the ocean.

The most disheartening fact is that the tourist industry has lost a total of 130 million jobs worldwide. It also looks like a full recovery is nowhere in sight and we are still miles away from a “full stop” on the pandemic.

The World Health Organisation or WHO had initially pinned its hopes on the global rollout of Covid-19 vaccines to help improve the situation. But, even though more than a billion doses have already been administered in 193 countries and territories worldwide, 87% of the vaccines are actually in the hands of a handful of wealthy nations.

As for the rest of the world, they either have no money to buy more, or there is no available stock for them.

The uneven distribution of vaccines will not help stop the virus’ spread completely. A fourth wave of infections is coming, for certain.

Countries that have extensively undergone inoculation exercises are equally worried and feeling uneasy about the whole situation, but they understand the need to restart their tourism industry to generate jobs and incomes.

For example, Iceland has started its vaccine passport programme; the European Union has launched its digital green certificates; the United States has opened up domestic travel for all its 50 states; and Australia and New Zealand have started their travel bubble programme (though it is currently on hold again).

It looks like every nation is attempting to open up their borders within their respective regions. In principle, such a development is positive and encouraging.
Farsighted leaders around the world have been working very hard to fight the virus in order to bring life back to normal for their citizens. It starts with an implementation of lockdown policies based on scientific points of view, quarantine, widespread screening of the people, and immunisation. At the same time, these countries also seize every opportunity to discuss with key business leaders to bring on an effective exit plan.

Singapore Airlines is one such example. They have both the strategies and confidence, believing they can achieve 26% of pre-pandemic passenger volume by the end of this May. With such positivity, does it mean nations will soon scrap the mandatory quarantine for inoculated travellers entering their countries?

Unfortunately, the coronavirus appears to be much “smarter” (equipped with artificial intelligence, maybe?) than we thought, as if it can see through human fallacies and missteps.

The virus does not seem to be afraid of the vaccine, as it keeps mutating, making the situation worse for everybody. Daily infection numbers keep going up, leading up to a fourth wave without much effort.

To date more than 142 million people have been infected and 3.1 million have died from Covid-19 globally. An estimated four million new cases are expected to be reported each week in the days to come.

In view of this, is it really a good idea to keep hoping for a recovery anytime soon as projected by some folk? We are all set to go on with our day-to-day lives, without any more hiccups. But the wait does seem to be forever. 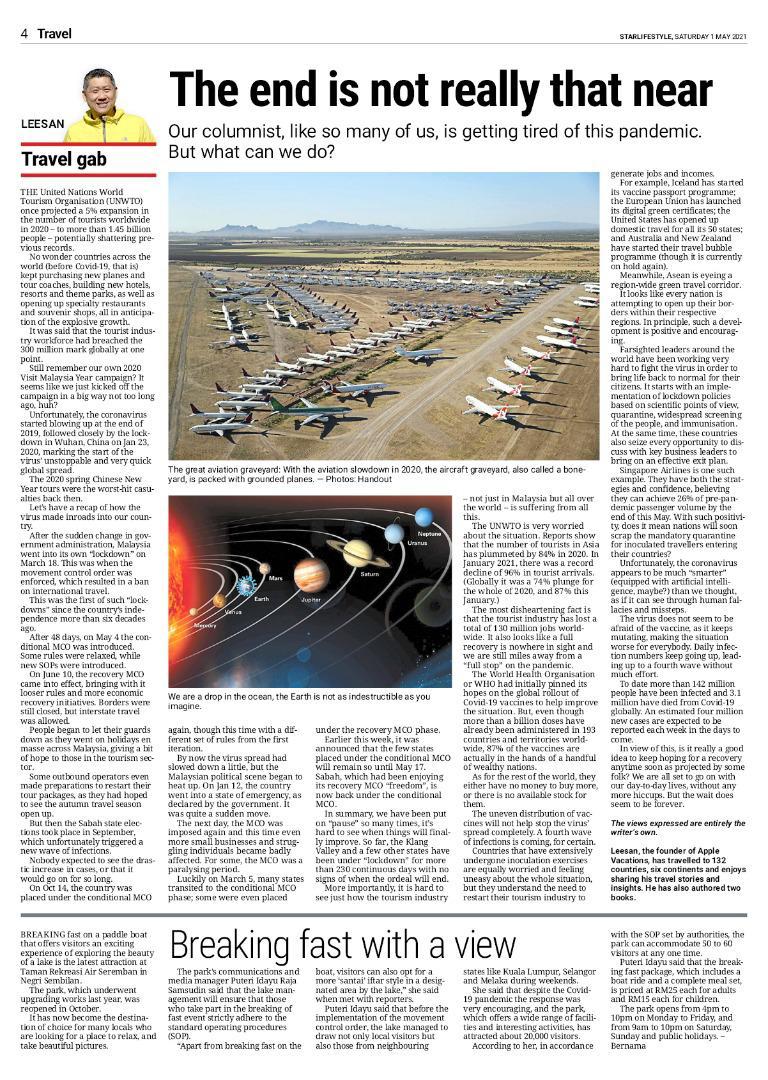 The Norwegian Fjords – an absolute destination for themed travel to Scandinavia

Frustrated by the pandemic – by leesan