Sabah’s Danum Valley may be difficult to get to but a trip here is worth all your time and energy.

BRITAIN’S Duke and Duchess of Cambridge, Prince William and Kate Middleton, went to the thick jungles of Danum Valley in Sabah in 2012.

Dressed in full adventure gear, they strolled around parts of the 130-million-year-old thick virgin forest, and crossed the 300m-long suspension bridge that was flanked by gigantic trees. Occasionally, they were greeted by an orang utan or two, along with a variety of other rare animals and birds eager to “meet” the special visitors.

The royal couple, who had only been married for a few months back then, had opted for a less “glamorous” (but perhaps more memorable and enriching) holiday and visited one of the planet’s last remaining lowland tropical rainforests instead.

For decades, many world-renowned personalities, celebrities, scholars and royalty have descended upon Sabah’s green paradise, Danum Valley. This is proof that the place is not just another run-of-the-mill tropical rainforest, but rather a veritable treasure trove of some of the world’s most unique and rare flora and fauna.

In 2019, British actress Judi Dench spent a few nights at Danum Valley, staying in a rustic chalet at the Borneo Rainforest Lodge there. She was filming a documentary miniseries called Judi Dench’s Wild Borneo Adventure.

She was said to have been very happy with her stay in the forest, even saying that after a few nights there, she had learned to live with the leeches and just enjoy nature – it was an experience that will live with her for life.

In the documentary, she can be seen saying, “There (referring to the old jungle), it’s still here!”.

Indeed, there’s still this pristine, untouched natural haven teeming with such a diverse spectrum of tropical plants and wild animals somewhere on this planet.

Danum Valley is the world’s oldest lowland Dipterocarpus tropical rainforest. The Meranti tree reaching a staggering height of 100.8m has been gazetted as one of the world’s tallest rainforest trees. As if that’s not enough, the thousands of plant and flower species here provide an excellent habitat for countless of mammals, including the Borneo pygmy elephants, macaques, clouded leopards and orang utans, not to mention over 300 bird species.

The forest is the only virgin rainforest that is over 100 million years old in the world. Such a perfect environment makes it a wonderful habitat for the many wild animal and plant species living there.

Many Malaysians have no idea where Danum Valley is – even in which state it is located – and that is actually quite embarrassing. Many do not know how magnificent the forest is, or even if they did, some may not think that it isn’t such a big deal at all.

However, because of the pandemic, more Malaysians have had the opportunity to discover the many, many wonderful nature destinations that the country has to offer, and this is a very good thing.

Unlike most of the national parks in our country, an area of 80km radius from the heart of the Danum Valley remains out of bounds to human activities. The nearest town, Lahad Datu, is 85km away, or a three-hour drive on mostly gravel roads and muddy trails, which is actually a blessing in disguise as this helps to keep the virgin forest well isolated and protected.

Currently, the 438sq km Danum Valley Conservation Area (DVCA) neither has a national park status nor is it under the jurisdiction of the federal government. The forest is actually “owned” by the Sabah Foundation (Yayasan Sabah) and is under the purview of the state government, which in 1980 pledged to permanently preserve Danum’s natural ecosystem.

Sabah has for so many years been a major concern for international environmental groups for its vast forest logging area and extensive oil palm plantation.

In her documentary, Dench mentions that she was initially worried how the wild animals were going to adapt to their increasingly “inhospitable living environment”.

However, after meeting so many passionate environmentalists and conservationists in Sabah who dutifully and selflessly safeguard the state’s flora and fauna, Dench says that she feels reassured that things will be alright.

Danum Valley was actually gazetted during the British government rule as a Class I protection area, as well as the base of the Royal Society’s rainforest research programme.

Sabah has continued to work with the Royal Society even after independence. Today, a DVCA tropical rainforest research centre has been set up in Danum, along with one of the world’s 27 Global Atmosphere Watch (GAW) stations.

When we visited recently, we drove on the gravel road for three hours before arriving at the entrance of the Danum Valley conservation forest, and another 4km past the DVCA signpost to reach our final destination. This is where the 350km-long Danum River makes its sharpest bend on the foothill of the 1,093m Mount Danum.

This is the furthest point that travellers, hikers and birdwatchers can go. Despite the tiring journey, I can assure you that a trip here is worth all your time and energy.

In Danum, we were lucky to have 10 knowledgeable eco tour guides with us. We were greeted by a nature symphony from insects, birds and wild animals, which was amazing.

Sure, we “fed” a lot of leeches during our visit, but we also got to see about a dozen orang utans frolicking around us, in their natural habitat.

Surrounded by the pristine nature in the middle of the rainforest, we couldn’t help but ponder over the present dilemma of our Planet Earth and ask: From where did we come and to where will we be headed?

The Danum River Tubing is worth a try as it is 100% exciting and not difficult to do. – Photos:LEESAN 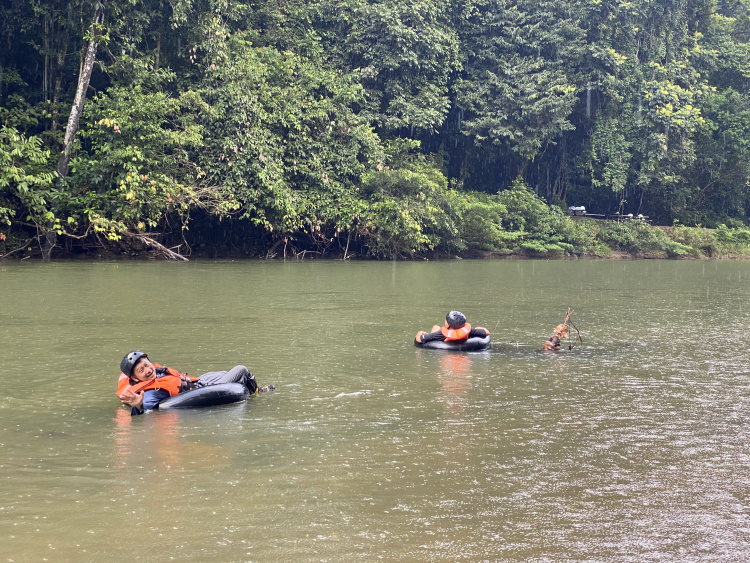 A view of the forest from Danum Mountain. 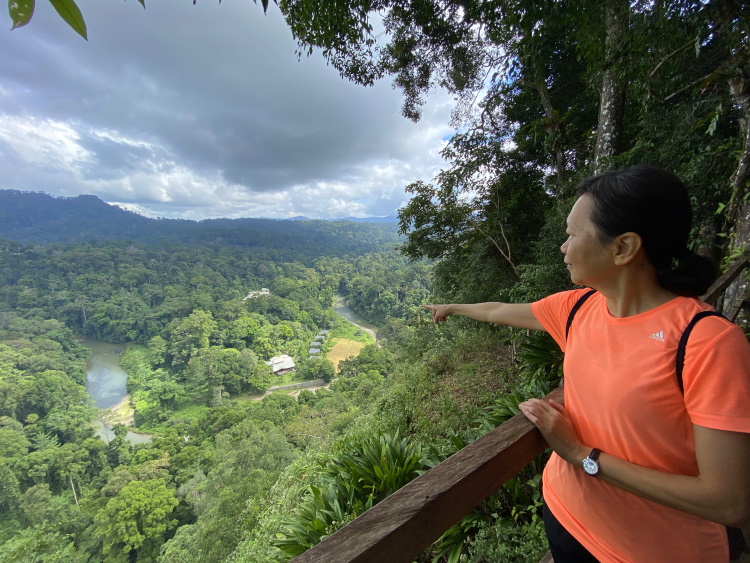 Get on the 25m-high suspension bridge to get a better view of the jungle. 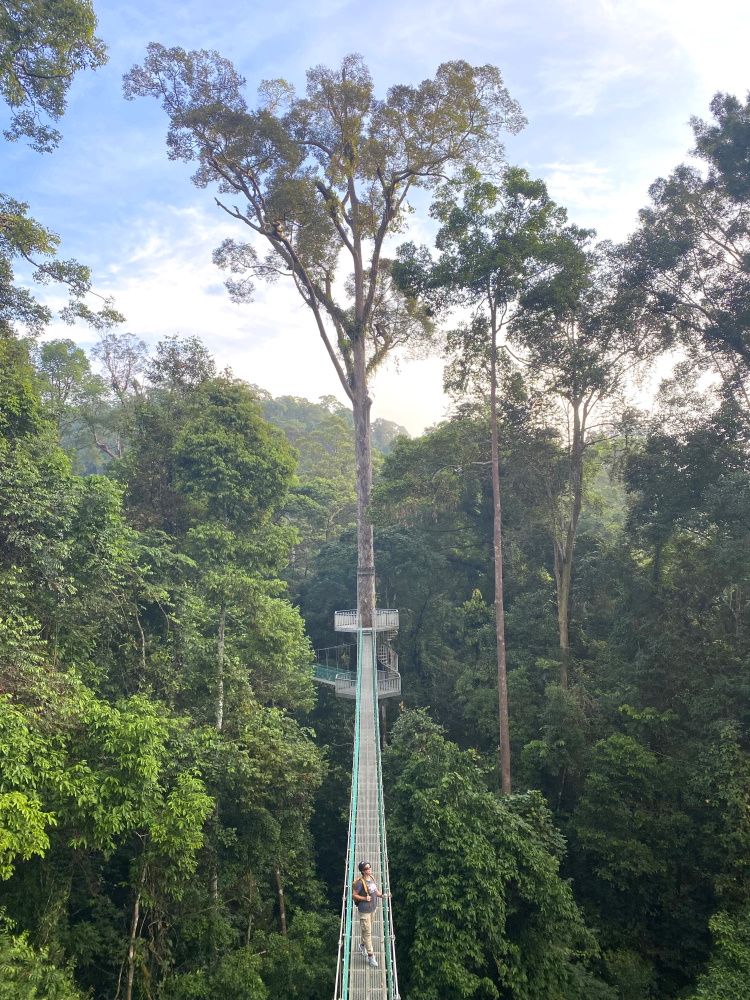 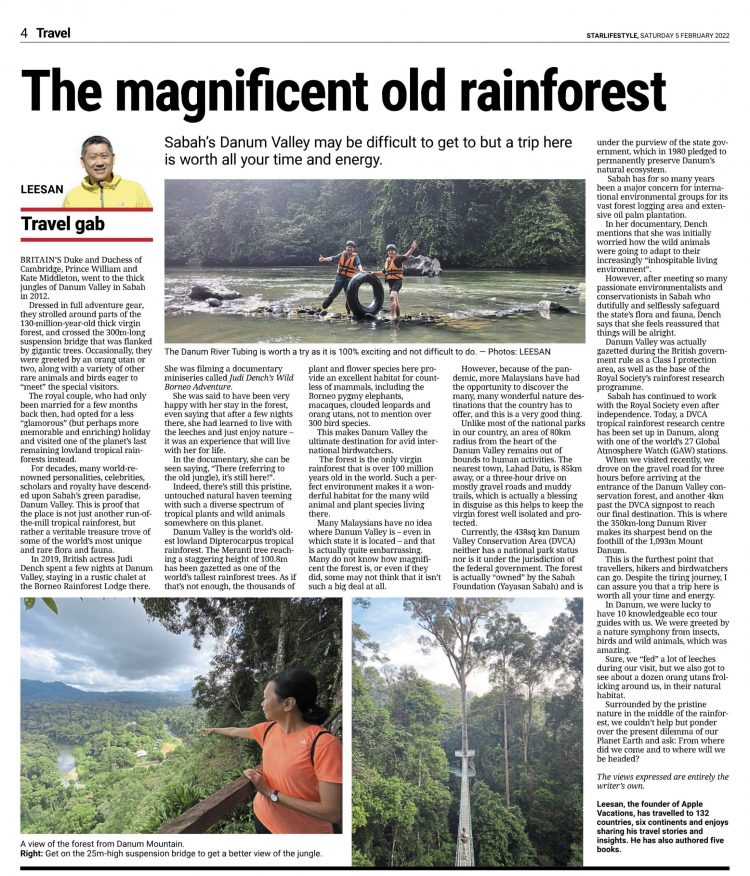