Climb every mountain – by leesan

Climb every mountain – by leesan

The columnist and his travel buddies are mesmerised by Nepal’s natural beauty, and colourful storeis.
JOSHI, the chef at a Spanish restaurant in Kathmandu, Nepal, used to work as a sous chef for many years in the resort city of Velencia in Spain. He’s a good cook, and I am particularly fond of his gazpacho and chicken paella.

Joshi is an example of what the Nepal government had been trying to do over the years: Exploring the concept of global tourism and taking initiatives to woo experienced talents and experts into the country.

The government had also encouraged local and international investors to help develop the travel and hospitality industry further, by setting up hotels, F&B outlets and specialised tourism products. One of the top products had been the Himalayan trekking experiences, which saw many professional international mountaineering companies opening up in Nepal in recent years.

To be honest, a landlocked country like Nepal would have to rely heavily on its mountaineering tourist industry and the export of migrant workers to support its economy. But sadly, the per capita income of some 30 million Nepalis is only around US$1,400 (RM6,186).

As such, the country’s tourism board had to mobilise the entire nation and get the people adequately prepared to welcome a targeted two million foreign tourists per year.

However, very often, plans don’t go as anticipated. Almost all of Nepal’s initial plans were disrupted by the pandemic, plunging the nation into a state of panic.

“While it’s definitely better to make paella with seafood, the country has, since April this year, banned the import of seafood, along with other luxury items, automobiles, tobacco, liquor, fashion accessories and even chocolates. Only essential items such as flour, sugar and medicine are allowed in the country,” said Josh in despair. 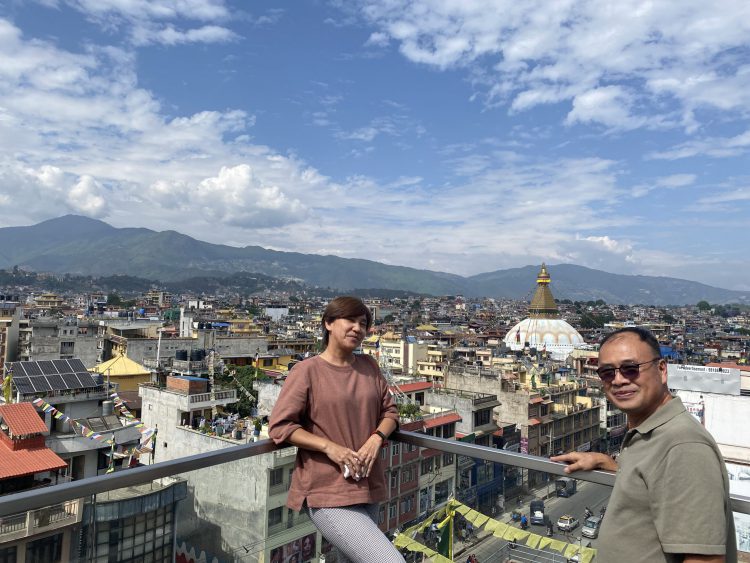 The Boudhanath Stupa(background), is a UNESCO World Heritage site in the city of Katmandu. -Photos:Apple Vacations 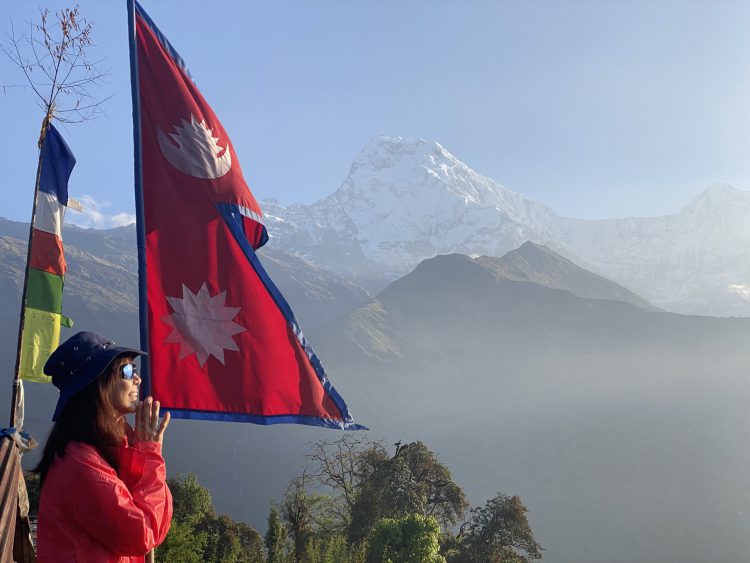 The Annapurna mountain range is the biggesst eco-tourism attraction in Nepal.

Currently, Nepal is also suffering from a severe fuel and electricity shortage that has triggered a worsening inflation.

The country’s central bank has recently stated that Nepal’s foreign reserves are running low and foreign exchange credit can only last for another six months. But at the same time, it refuses to give up and is determined to work harder than ever to bounce back.

Historically, Nepal has never been colonised by any Western power. It is a country with a lot of stories to tell, albeit perhaps not all very happy ones!

From 1996 to 2006, Nepal experienced a civil war that eventually tore up the nation and its people. The 2001 royal massacre shocked the whole world, and eventually led to the collapse and deposition of the 239-year Shah Dynasty in 2008.

However, the country has not managed to improve itself from then on. And if that’s not enough, in April 2015 a massive earthquake measuring 8.1 on the Richter scale occurred, which almost ruined the whole country.

Fortunately, the Nepalese have learned how to survive living in a hostile environment for centuries and always believe that things will be better after a disaster.
Nepal today

Recently, we stood in the 17th century Patan Durbar in culturally diverse Kathmandu, looking at the endless stream of worshippers and listening to their joyful voices. The world heritage site was largely destroyed in the 2015 quake, but today, it is slowly being restored to its former glory, thanks to extensive restoration works.

The ethereal sounds emanating from the many shops in the vicinity selling healing bowls exuded an aura of peace and serenity. Be it the 83% of Hindus or the 10% of Buddhist folks in the country, everyone seemed to be devout believers of their own faiths, and they all have the same hope: That they and their families will gain access to a better life soon.

There are many Nepalis who come to Malaysia for work, mainly seeking steady employment in the manufacturing and construction industry. Others work as security guards, and are often commended for being hard-working, trustworthy, loyal and friendly. 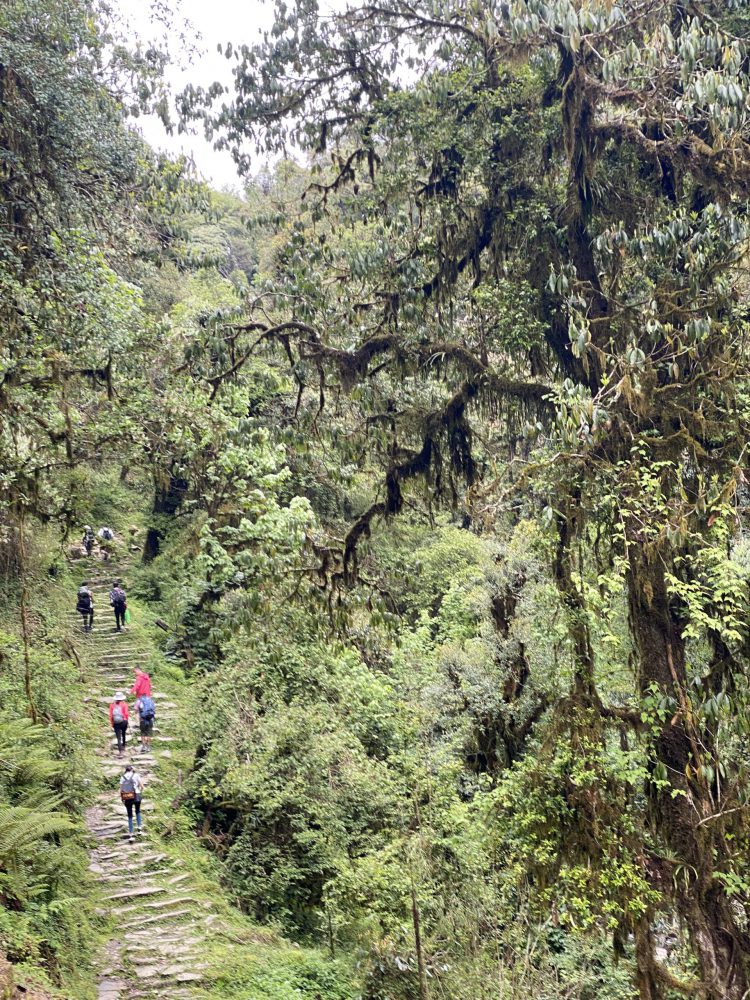 The Poon Hill trail, a 20-hour trek, is one of the best routes in Himalayas.

While hiking along the Annapurna Trek, we were humming a popular local folk song called Resham Firiri, amazed by the thick foliage of ancient forests. The local tour guides generally believe that after the white clouds have floated past us, what will come next is the sunny clear blue sky and the splendid sight of the snow-capped peaks of the Himalayas in the distance.

As we moved on, we were greeted by the smiling mountain people along our way: “Hey, Malaysians, how are you? Namaste!” they cheerfully said.

It was drizzling at 5am, but we had been trekking for more than 20 hours (35km!) and were just too excited about finally reaching the top of the 3,210m-high Poon Hill to notice the dreary weather. The natural beauty of Nepal is simply breathtaking! 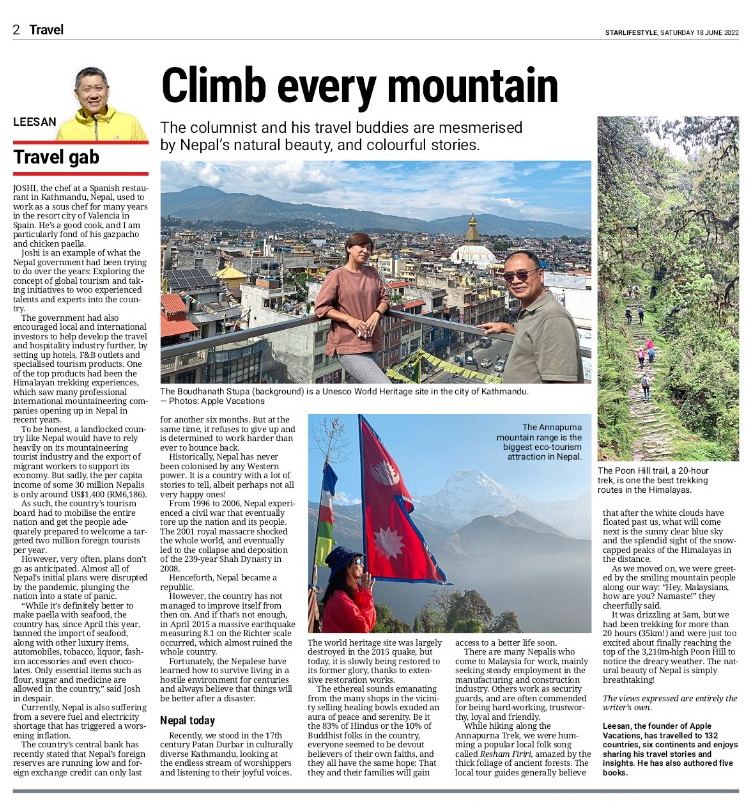