The columnist recently experienced his first ever emergency on board an aeroplane.

UNPREDICTABILITY is commonplace in a flight. I am sure folks who travel often must have had some experiences while airborne, right?

Some of you might have experienced air pockets that cause the aircraft to dive thousands of feet mid-air, with alarmed passengers screaming at the top of their voices, or even some less fortunate ones suffering a minor fracture or two.

Did you know that there are many planes around the world that have been “hit” by a flock of birds? Some birds are also sucked into the engine, forcing the aircraft to seek an emergency landing.

Occasionally, I have also come across flight attendants calling for a doctor or medical practitioner on board a flight. This could only mean that someone in the aircraft requires emergency medical attention.

We have also seen a fair deal of drunks on airplanes, and in more severe cases, these people would even threaten to hurt the flight attendants. Under such circumstances, the chief attendant would need to take charge immediately and try his or her best to subdue the passenger.

In even more extreme cases, the captain would have to intervene, eventually placing handcuffs on the troublemaker and reporting the incident to the tower control at the arrival destination. Once the plane lands, this person would immediately be handed over to the airport police.

When an aircraft is charging forward at over 800kmph at an altitude of 12km (40,000ft), passengers will subconsciously be transported to a completely different realm that may seem cosy and relaxing. One can savour in-flight meals, take a nap and visit the washroom at any time while on a flight. But the reality is, anything could happen at any time.

To be honest, the rate of air crashes is extremely low, but unusual accidents could still happen as a result of natural forces or human sabotage. When this happens, it is crucial that the flight operator has good and effective standard operating procedures (SOP) in place, and that every employee on board knows the right things to do. 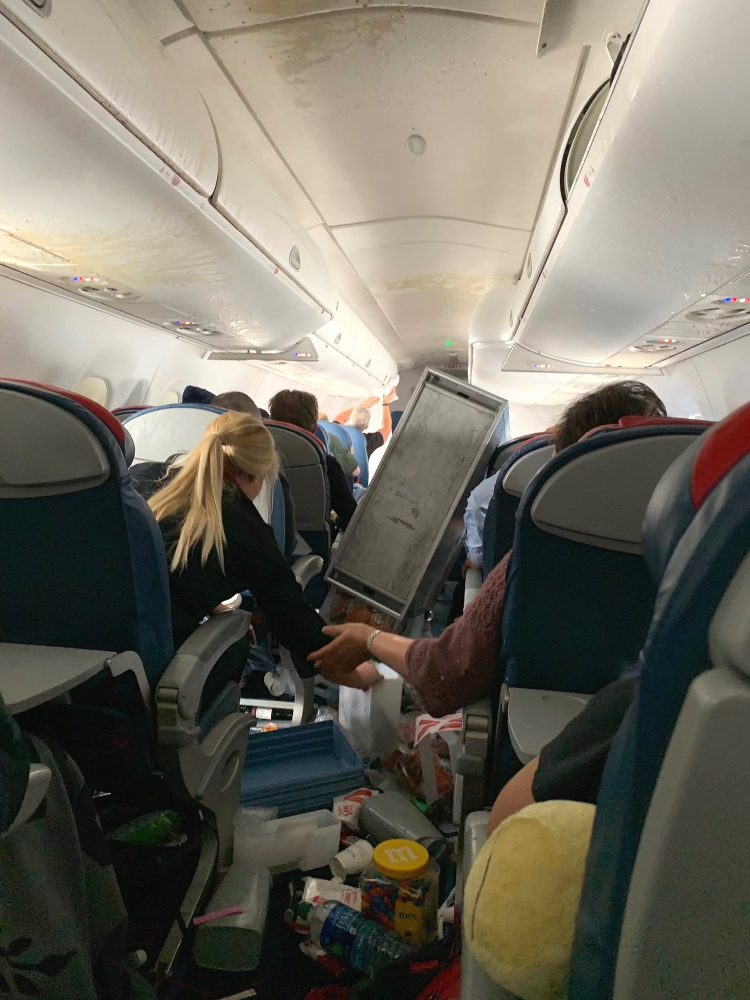 Air turbulence is a very real concern for many travellers. 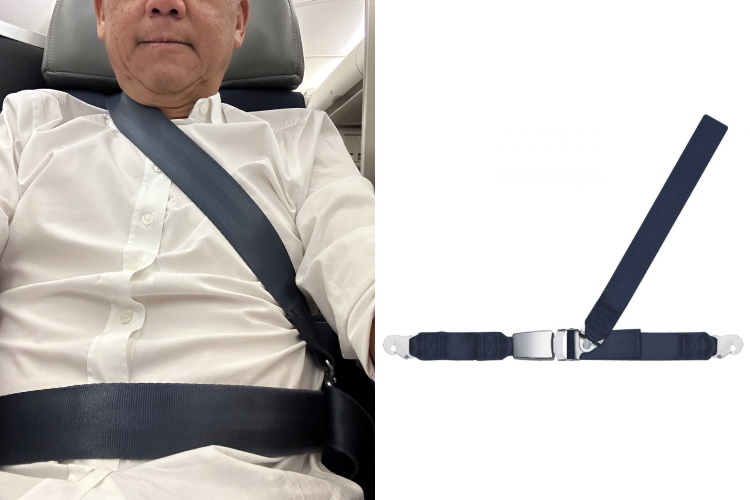 The columnist notices that these days some aircraft use seat belts that resemble the safety belts in cars.

The 2022 Korean film Emergency Declaration touches on one of the worst things that could happen during a flight – a “viral attack” akin to the hijacking of a plane mid-air. One after another the passengers die, forcing the captain to plead to the nearest airport for an emergency landing.

I guess this is what they call “emergency declaration” in aviation.

Under the international air transport regulation, any air control tower receiving a distress call from a pilot must respond affirmatively to the plea, and must put all other flights about to land or take off in the same airport on hold, so as to give the problematic aircraft priority. It is kind of like in a war zone where Red Cross medics must lend a hand to injured troops, be they on the friendly or hostile side. This is what we call humanitarianism.

During my more than three-decade career as a tour guide, I have set a record of taking 101 flights within a calendar year, putting me on par with most flight attendants! As such, I can claim to have some fundamental knowledge of flying.

Although I am lucky enough to have never experienced anything on a flight as dramatic as those that you see in movies, I would occasionally remind myself that I might still chance upon one someday. How would I react when the fateful day comes? 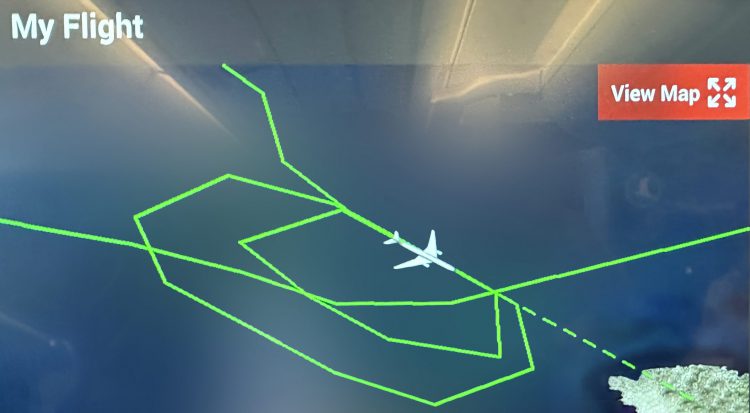 That stop-and-go flight we experienced that day paid testimony to the saying that life is like a drama. Indeed, life is a journey itself!

Well, I finally got my answer.

Something happened during one of my more recent flights. I was then on the second leg of my transit flight, sitting at seat 5A.

After the cabin door was shut and the aircraft started to glide out of the runway towards the open sky, I was all ready to face 16 hours of flying time. I listened as the chief steward announced over the PA system that the seatbelt signal would be turned off and a meal would be served in 30 minutes.

The passenger at seat 4A stood up and opened the overhead compartment to retrieve his belongings. He had a few words with a friend sitting nearby, and then returned to his seat. I saw every move he made as he was my seat “neighbour”.

The flight attendants rushed to the seat and immediately started performing CPR, while listening to the brief explanation by the passenger at 4C. The chief steward asked over the PA system: “Is there a doctor on board?”

Luckily, there was a female doctor around and she came up to our area. I vacated my seat to allow them to work on the man.

What happened before my eyes was like that familiar scene we often watch in movies and television shows. One by one the flight attendants took turns performing CPR, while the doctor observed his condition closely, even injecting him with something. The captain remained in the cockpit, probably busy making an emergency declaration to the control tower, and preparing to make an emergency landing.

About 80 minutes later, we landed in an airport in an island country. An ambulance, a fire engine, a few police vehicles and other rescue personnel were already there, waiting for us. They rushed into the aircraft as soon as the cabin door opened, carrying with them some medical equipment. They fought every second to save the passenger’s life.

Another 25 minutes later, Passenger 4A was carried out of the aircraft in a stretcher, and the rest of us in the plane prayed that he would be okay.

We were stranded on the apron for two-and-a-half hours, and the flight resumed after the aircraft refuelled.

After all that commotion, I thought to myself, “I must seize the moment and really live my life to the fullest!”

(Update on the passenger: Unfortunately, we were told that he did not make it. May he rest in peace.)

Leesan, the founder of Apple Vacations, has travelled to 134 countries, seven continents and enjoys sharing his travel stories and insights. He has also authored five books. 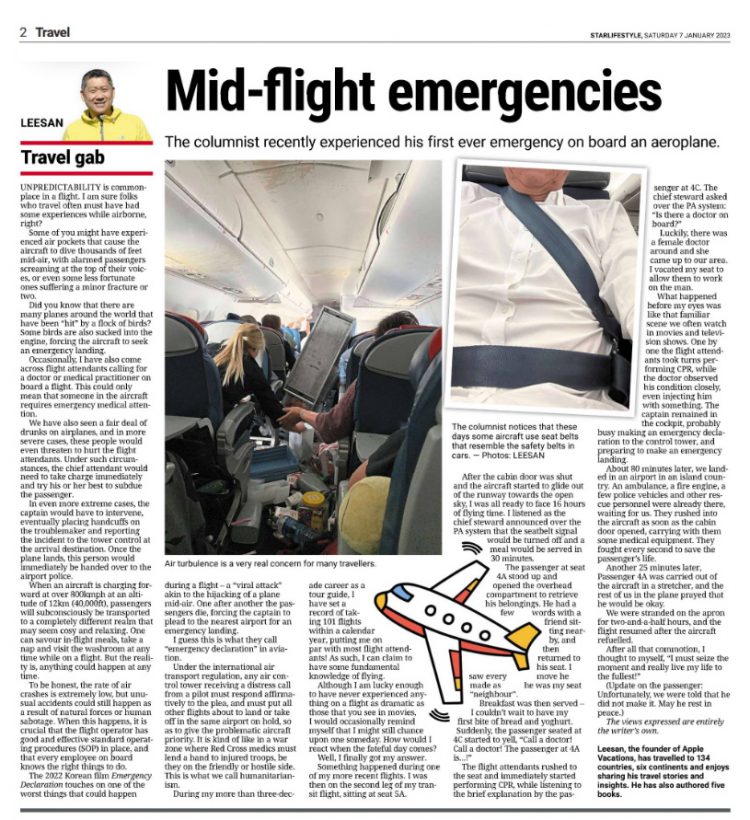 The October ‘Siege’ — by Leesan