A Unique Malaysian Characteristic: “Jalan Along”

So many of our road signs have been turned into “Jalan Along”. Even the supporting rods are not spared some of them are wrapped around like a mummified road sign. For a developing country which aims to be a developed country by 2020, such kind of uncivilised acts s a shame to us. 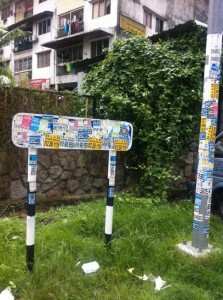 I came to know of a famous Hong Kong travel weekly that published a write up about travelling in the Bangsar area of Kuala Lumpur. It was quite interesting and full of information. However, amongst the photos in this article, there was one that has particularly captured the curiosity of my friends in Hong Kong. It was the photograph of the usual blue coloured road name plate that we have on our roads. In this case, the road sign is covered all over with stickers of money lenders. So much so that the road name is hardly visible. This is the so called “loan” advertisements found all over Malaysia particularly in the Klang Valley where it became part of the background in many a travel snapshot.

As a Malaysian KL-lite, it was hard for me to accept it when I saw the publication. I felt as though as we have no dignity. This is how the foreigners looked at the ugly side of us – exposing the extremist culture, the workers who stuck the flyers and the ring leader behind all these. It is such a sweeping statement for us.

As soon as I returned, I made a survey at various areas in Klang Valley. Much to my dismay, they were even more outrageous. So many of our road signs have been turned into “Jalan Along”. Even the supporting rods are not spared some of them are wrapped around like a mummified road sign. For a developing country which aims to be a developed country by 2020, such kind of uncivilised acts s a shame to us.

What could it be? Ethical issues or failure in our education?

Could it be the poor ethics of our people or could it be due to a failure in our education system? Or our civilisation is turning backwards? In the various countries of Africa and even in some war-torn countries of West Asia, I have not seen any vandalism of this extent. But this situation crops up in our beautiful garden city instead.

Sometimes I wonder, are we in the right position to criticise the public toilets in China? Or pinpointing the garbage dumps in India and Jakarta? Are we resigned to be branded by our tourists as “special characteristics”?

Of course, I believe nobody will accept this kind of situation. Everybody certainly will wish for a society with better quality.

What shall we do now? A big chunk of “Jalan Along’ on our streets, so much so I’m afraid the GPS couldn’t even locate our co-ordinates.