10 greatest taxis of the world

Nothing is certain in this world, Benjamin Franklin very nearly once said, except death and taxis. And it’s true. Cabs, like the Grim Reaper, are one of the world’s great constants; wherever you go they’re always there — unless it’s raining.Got your own great taxi experiences? Let us know below in the comments.

Nothing is certain in this world, Benjamin Franklin very nearly once said, except death and taxis. And it’s true. Cabs, like the Grim Reaper, are one of the world’s great constants; wherever you go they’re always there — unless it’s raining.

But times are tough for these ubiquitous people carriers. Spiraling fuel costs are pushing up fares, and pesky governments are intent on driving classic — if environmentally disastrous — models off the road.

So before it’s too late, we’ve taken a look at the world’s greatest taxis. This lot don’t just turn your A into B, they turn your cash into experiences. All hail.

Got your own great taxi experiences? Let us know below in the comments.

Luckily there’s room in these nippy black leviathans — as much a part of London as fish and chips, Buckingham Palace and Australian bar staff — to accommodate five passengers and their suitcases, with enough space left over for the driver’s enlarged hippocampus.

With a mighty V8 engine under the hood, it’s no wonder that New York cabbies drive their Crown Vics like they’re being pursued by tax collectors. Not for much longer though.

The Yellow Cabs don’t so much guzzle gas as binge-drink it, so they’re being replaced by eco-friendly Nissans. They’ll still be as yellow as the cheese on a Manhattan deli’s ham and Swiss, but will they keep that strange New York cab smell?

Paint it bright and polish it up -- no one will ever notice when the spin cycle kicks in. （Photo taken from http://www.cnngo.com）

Starved of car imports, resourceful Cubans have cannibalized washing machines to keep their vintage Buicks and Cadillacs living as long as Fidel Castro.

Most of these taxis are unofficial and liable to overcharge, but unless you’re a fan of cola, rum and lime, ain’t nothing libre in Cuba these days.

Auto-rickshaws aren’t unique to Bangkok and weren’t invented here, but like smiles, noxious energy drinks and Ping-Pong tricks, Thailand claims them as its own.

Rivalry from safer four-wheel cabs has threatened their trade, but like cockroaches, tuk-tuks would probably survive a nuclear Armageddon.

If you drive a Porsche for a living you can paint it any color you want, OK?（Photo taken from http://www.cnngo.com）

Most major cities have novelty boats, helicopters or luxury car taxis, but somehow being picked up by a Porsche makes more sense in Moscow where oligarchs have money to burn and are apparently willing to pay a US$95 flag-fall.

Cheaper options are available, but this is Moscow, so not much cheaper. 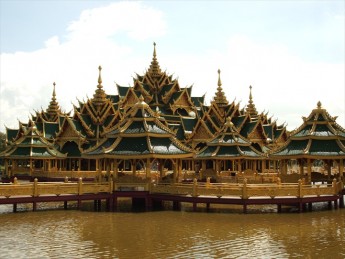