I love travelling on trains for many reasons. A train coach is usually more spacious than a bus or a flight cabin.
Trains usually run through areas that are not accessible by normal traffic and it’s a chance for a different point of view. 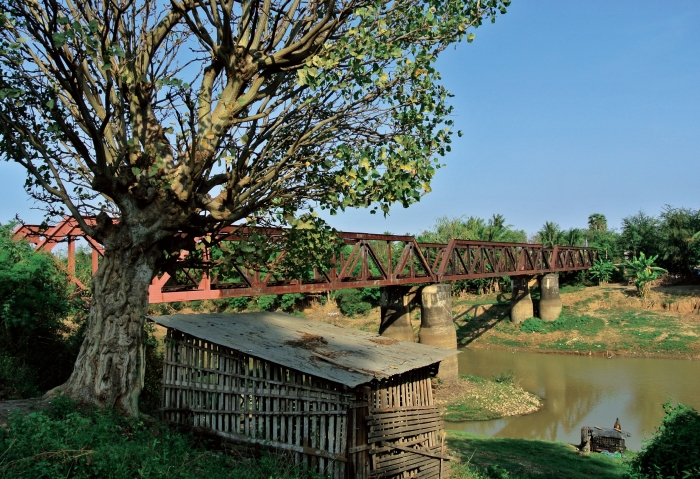 An abandoned railway bridge in Battambang

I love travelling on trains for many reasons. A train coach is usually more spacious than a bus or a flight cabin. For long distance travel, a sleeping berth in a rail coach is always more comfortable than a seat in a bus or an aeroplane. Trains usually run through areas that are not accessible by normal traffic and it’s a chance for a different point of view. Well, if it is a local non air conditioned coach, I can open up the windows for some exercise with my camera.

During the long hours on the train, that is the time when I can interact with my companions or other people as I do not want my travels to be merely moving from point to point. Very often in my busy work life, I spend more time with a computer or camera than with people. So travelling on rail is a chance for me to catch up with people. I think that’s enough of my rattling about trains. This time when I travelled to Cambodia, I specially planned the return journey with some experience about trains.

Thrilling on the ‘open-air’ Bamboo Train During the French colonial days, the first railway line in Cambodia connected Phnom Penh through Battambang to Poipet, the town at the Thai border.

However, it was suspended during the wars and left in a dilapidated state.

In Battambang, the locals make use of the railway tracks with an innovative transportation mode called the Bamboo Train. It is a simple platform made of bamboo placed on top of two axles with wheels, powered by small engines. Upon arrival at the destination or when meeting on-coming traffic, passengers have to get down so that the driver can dismantle the train and take the axles off the track.

Nowadays, the Bamboo Train has become a tourist attraction in Battambang. It was a thrilling experience for us, sitting on the “open air” train. The bamboo train took us through the countryside and rice fields of Battambang. It was bumpy but fun, we had to duck our heads when there are tree branches. And when it goes downhill, we yelled and shrieked our hearts out. It was indeed a unique train where we could stop the train to capture some breath-taking views.

Bamboo train departing from the ‘station’ 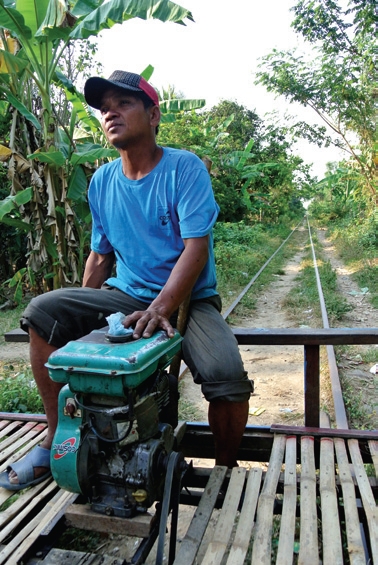 The bamboo train is powered by motor 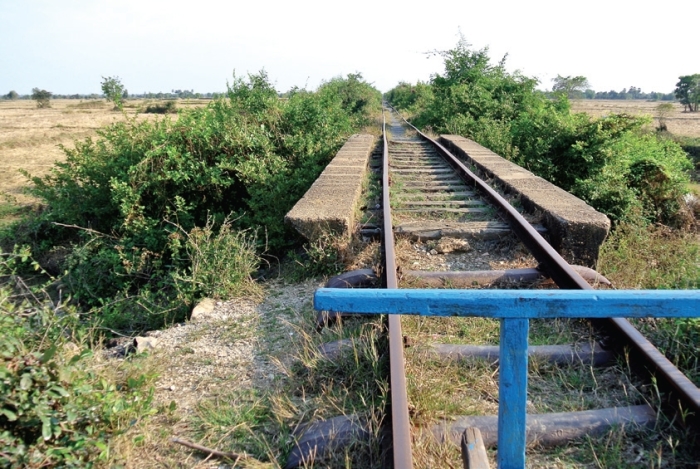 A thrilling experience on the bamboo train Village kids enjoying themselves on the bamboo train

Battambang is the second largest city in Cambodia and it is located in the Northwest region. The name of this city is derived from a legend that about a magic stick used by Khmer King to gain power.

Battambang means “disappearing stick”. At the main road to the town, there stands the famous statue of the town – an ancient Khmer King holding a stick.

Battambang is a quiet and peaceful town that is not touristy like Siem Reap and very local. It has a number of fine colonial buildings around the town and also along the river front. The market place is a hive of activity in the evenings when the locals stop by to shop for their dinner. There are also pagodas, temple ruins, caves and waterfalls around Battambang. But for us, it is a place for a good rest after getting a big dose of temples in Siem Reap.

Battambang has an air of nostalgia with the old buildings around. Even the hotel room that we stayed for the night made us felt like travelling back in time. It’s like a grand bedroom from the sixties, probably so because the name of the hotel is Royal Hotel.

Getting to Battambang is easy. The roads are very much better now with a paved highway. Battambang is accessible by bus from Siem Reap and Poipet via Sisophon. Sisophon is the transit point for most bus services. Most guest houses and hotels can help to book the bus tickets and it costs only USD5 per pax. Sunset view at the countryside of Battambang 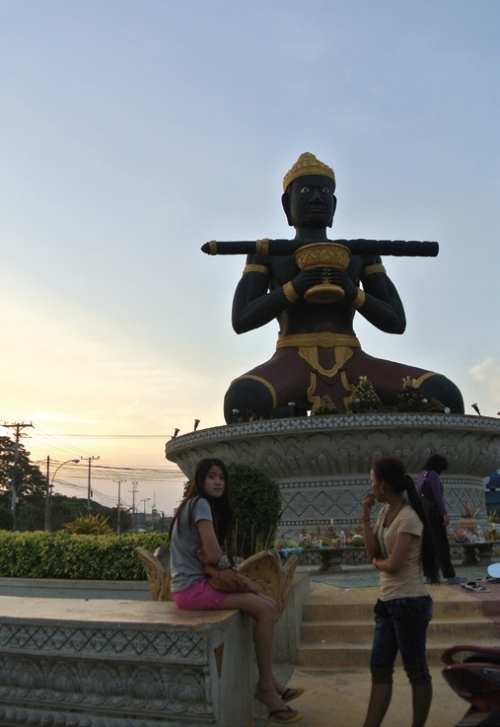 The magic stick that gave Battambang its name On the train from Aranyaprathet to Bangkok 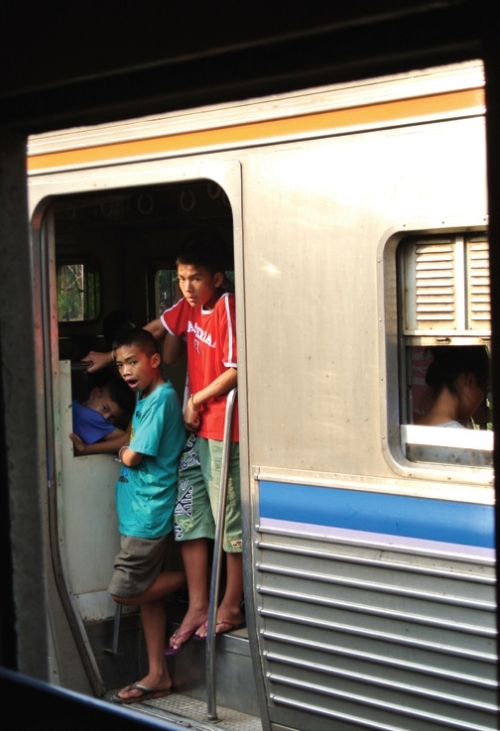 Travelling from Aranyaprathet to Bangkok Poipet border town on Cambodian side

After trailing through the long queues at the Poipet/ Aranyaprathet immigration check points, we hopped on a tuk-tuk to the railway station. The tuk-tuk cost us 100 Baht for a few km journey. We were so delighted when it cost us only 48 Baht per pax for this 255km journey from Aranyaprathet to Bangkok’s Hualamphong station. This is the cheapest train that I’ve ever taken in my travels!

Although it is 3rd class only and without airconditioning,
the train coach is spacious and pleasant. It is quite an enjoyable ride through the countryside of eastern Thailand. When in Thailand, there is never a moment of food shortage. Not even on the train. Vendors keep walking up and down the aisle, tantalising the passengers with delicious looking food.

We took the 1:55pm train from Aranyaprathet and arrived at Bangkok Hualamphong station by 8pm. We kept the windows open and allowed the breeze to brush on our face. Although it was a hot afternoon, the breeze from the countryside was cool. Of course, the beautiful sunlight allowed use to grab some interesting shots as well. This is an experience that we won’t find in any modern city trains with air-conditioning and sealed windows.

The train runs through the market!

Very often in many countries, we have seen people living beside the railway tracks in houses, shacks or whatever. But seeing a train running through the market and literally just inches away from my face – is something beyond my imagination! Yes, it’s happening 8 times a day at the Maeklong Railway Market in Thailand. Maeklong market is located in Mueang District of Samut Songkhram Province, south-west of Bangkok city.

At other times, the Maeklong operates like any other vibrant markets offering fresh fruits, vegetables, meat, sea food, snacks, etc. The excitement rises when the train arrives or leaves the station. Once the station master rings the bell, the stall vendors will spring into action. Everybody help one another to close their awnings. Those who have installed roller wheels on their tables will simply pull them backwards. Those who spread their produce on the floor will have to remove some of their stuff away from the grinding wheels of the train. It all happened in a matter of seconds. Once the train passes, everything is quickly returned to its former position just as though nothing has happened.

It’s such a wonderful and amazing scenario. The Maeklong Railway Market is a perfect location for photographing exciting moments of the train so close to the lifestyle of the people. Apart from taking photos, do walk around and try out the tasty local street foods and snacks. 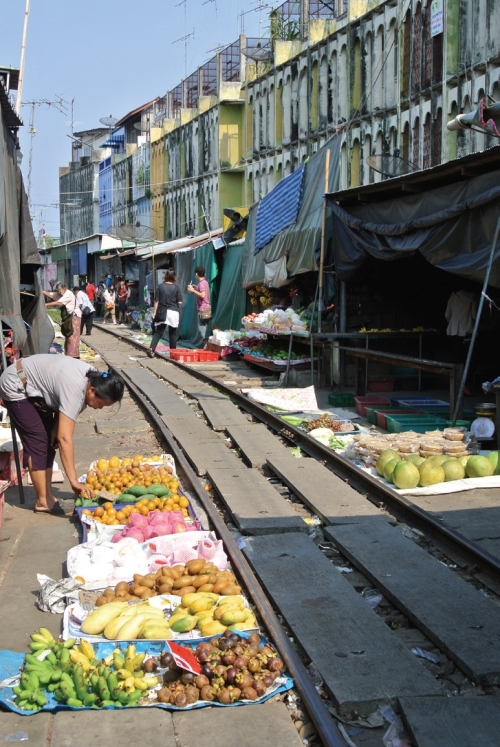 oncoming train to the railway market Vendors start to shift their produce and close the awnings upon hearing the signal of an on coming train.

Getting to Maeklong is pretty easy. From Bangkok, take the BTS (sky train) and disembark at Victory Monument station. Walk along the pedestrian bridge and exit at the staircase in front of Central – The Movie Plaza. The van station is only a few metres away from here. There many vans plying between Bangkok and Maeklong/Amphawa. The fare is only 70 Baht per pax (one way) on a shared van. It is about 1.5 hours’ drive to the town of Maeklong. The van driver will drop you somewhere near the market, just hunt your way around looking out for the railway track and you will find it in a short while.

Tips – If you are going by van, check the train schedule ahead and plan your time well so that you have sufficient time to explore the market before the train arrives. If you have not had enough of the excitement, wait for a second chance to photograph the activities when the train departs from Maeklong station. By travelling there ahead of the train arrival, you will get to view the train from the market.

For those who have more time, you can take the local train from Wong Wian Yai Station, get off at Mahachai station, take a ferry across the river and board another train at Baan Laem station. The train operates from Baan Laem to and fro Maeklong stations. This is a different experience where you will get to view the market from the train. 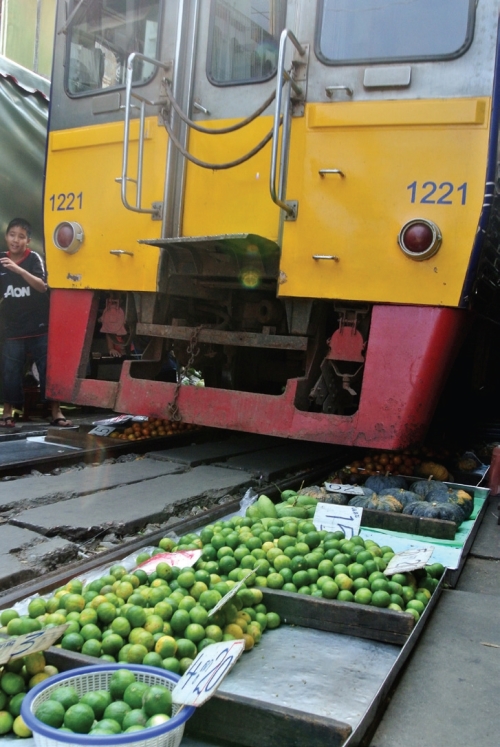 The train inched precariously over the market produce 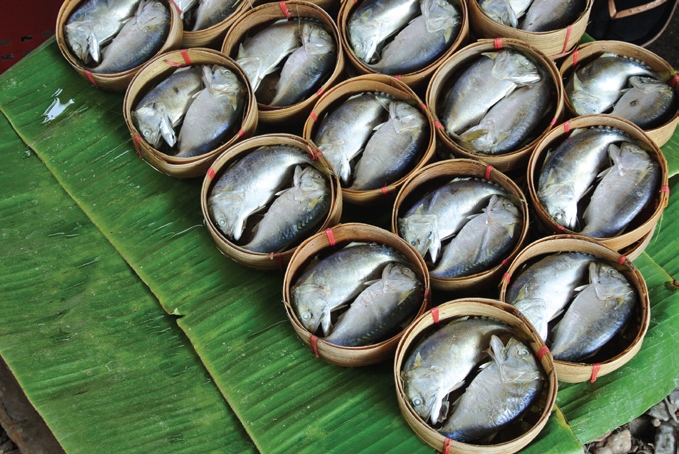 Fish sold by the trays 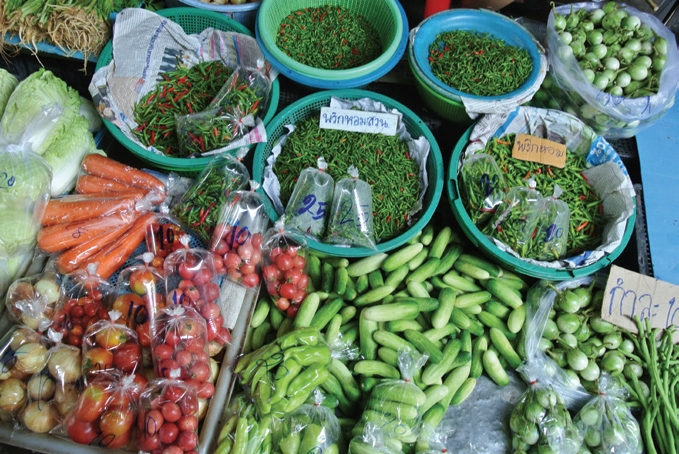 Fresh vegetables at the market The Maeklong railway market has everything on sale

Relaxing and soothing ride from Bangkok to Hat Yai

At last, we are back to the 21st century on this train from Bangkok to Hat Yai. This is a fully airconditioned train with 2nd class berths. They are actually seats in the daytime but are converted to sleeping berths at night. The lower berth costs 945 Baht and the upper berth is 855 Baht. We bade farewell to Bangkok and the train left Hualamphong Station soon after 2:45pm. It was a 16-hour ride to Hat Yai, arriving about 7am the next morning.

As the windows are glass sealed, we had to resign ourselves burying our head in our books and reminiscing the moments of our travels. We also made use of this long travelling time to recall the wonderful moments that we had together on this trip. Travelling on this train is very relaxing for me as I fell asleep very easily with the coach swaying and rocking away. Depending on which side of the train you’re on, you will either wake up to a beautiful sunrise or a beautiful blue sky. Both are equally beautiful. With this gorgeously red sunrise, we thus end our journey about trains.

Note:
This train service actually continues all the way to Butterworth Station in Penang, Malaysia. If you do not wish to get down at Hat Yai, you may purchase ticket for the full journey from Bangkok to Butterworth. The fare is about 1210 Baht. 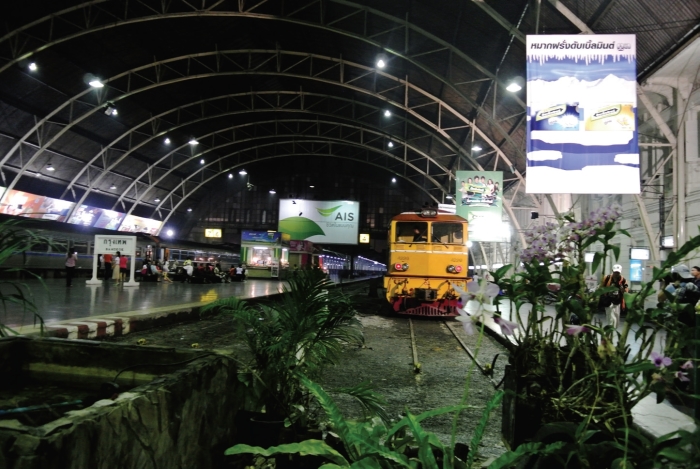 Greece – the wonders of nature and architecture