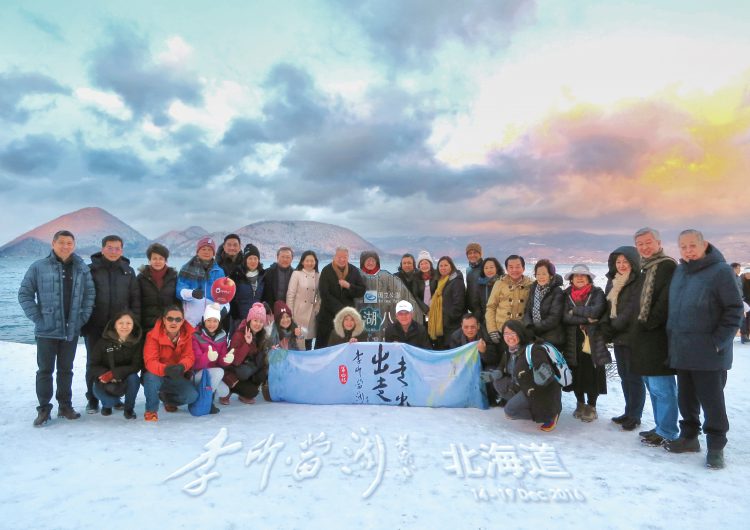 It’s okay to sometimes slow down, dare to be late (but not too late!) and to “stop and smell the roses”. An in-depth and thematic tour of Hokkaido, Japan in 2016 led by Chua Lam. Photo: Apple Vacations

Last week, while browsing in Taipei’s famous bookstore, Eslite, I was, as usual, attracted by the books placed prominently on the best seller rack. One particular title stood out – Thank You for Being Late – by New York Times bestselling author Thomas L. Friedman.

The title startled and intrigued me because tour leaders often wish we could say something like that during a trip. Group tours run on tight schedules and the tour leader or guide has the responsibility of ensuring every member in the keeps to the time.

But in many groups, there will be individuals who are tardy and think of nothing of making others wait for them. It is these moments, that make tour guides want to “thank” them for being late.

Some years ago, I was guiding a group to Osaka and Tokyo with 25 members. Among them was a family of four: a mother, two teenage daughters and a daughter’s boyfriend. They had no sense of punctuality.

Whenever and wherever we stopped, we had to wait for more than 20 minutes for them. Not surprisingly, they quickly earned the displeasure and annoyance of the other members.

I spoke to the mother and advised her to be more punctual and considerate. She didn’t listen. At Tokyo Disneyland, we waited for more than 30 minutes! After seeing how upset and disgruntled the other tour members were, I had enough.

I called the mother and she said, “My daughter is still queuing at the payment counter.” I replied, “I am sorry we have to leave without you. Please take a taxi to the hotel.” If I had added “thank you for being late”, would I have sounded less severe or plain sarcastic?

But Friedman is obviously not a tour guide. So what did he mean by that book title? From the author’s profile in the book, I learned he is a three-time Pulitzer Prize winner and a famous New York Times columnist.

His column is translated into 100 languages, published in 70 newspapers, magazines and online media around the world. So why would such a well-known author want to thank anyone for being late?

To me, Friedman is like Hong Kong renowned gourmet and travel writer Chua Lam who is also an advocate of punctuality. He is never late and he expects the same of others and he will never thank anyone who is late in meeting him or attending the same function as him.

Perhaps the contents of Friedman’s book have nothing to do with the title. The only way to find out was to read it so I bought the book.

Friedman, knowing his readers will be curious about the title, explains why he came up with it. He says he often has breakfast with people which allows him to do two things at the same time: eat and get to know interesting individuals.

But many of these people would be late and would apologise to him. Instead of being irritated, he would thank them for being late because he realised that by being late, they gave him a bit of time to think and reflect.

The full title of the book is Thank You For Being Late – An Optimist’s Guide To Thriving In The Age Of Accelerations. Friedman examines the three major areas of technology, globalisation and climate change which are accelerating at a fast pace and affecting many important facets of our lives like our workplaces, our communities, our ethics and our politics.

Friedman argues it is very hard for people to cope with this fast pace of advances and changes, or accelerations. What we can do is to adapt to these changes as best as we can.

But more importantly, is the need to find time to pause and reflect. So instead of getting angry at people for being late and wasting our precious time, we should see it as having earned some “me” time that the waiting has given us.

Because of the latecomer, we, like Friedman, can use the little extra time to ponder over our present and future, to enjoy the ambience, to listen to the sounds of nature or to drift into meditation.

Friedman also has lessons for nations. Just as individuals need to cope and adapt in this age of accelerations, so too governments. If they don’t, they risk losing out in terms of competitiveness and reputation. 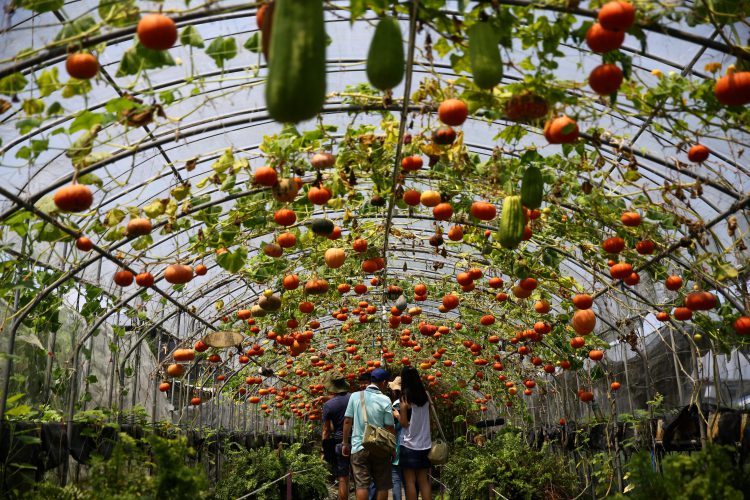 Thanks to the tireless efforts of the Taiwan Leisure Farms Development Association, today the country’s leisure farming programme and unique homestay experiences are well known around the world.

Taiwan is a good example. Ten to 15 years ago, Taiwan was the top choice for tertiary education for Chinese students from South-East Asia. It was also the leader in the semiconductor and innovation industries.

But an unstable political situation dented the country’s lead in technology and led to a brain drain. A few million dynamic young and brilliant Taiwanese entrepreneurs moved to mainland China, Singapore, Indochina and Central America.

Luckily for Taiwan, its tourism industry remained strong and continued to grow. Its international tourist arrival in 2018 was a record 11 million, of which 614,000 were visitors who enjoyed its unique leisure farm experience.

After reading Friedman, I now have the reason to be thankful to people for being late. They give me moments to reflect on many things, big and small. Will artificial intelligence and robots take away my job?

Will Donald Trump and Kim Jong-un have a second summit in Hanoi, Vietnam and make our world safer, happier and more prosperous? Will the US and China trade war aggravate the world economy and cause a catastrophe?

What is going on with our Malaysian economy, currency and share market? Should Malaysians remain optimistic post-509? Is Jho Low a real Malaysian or is he a son of a renowned Chinese politician?

Then there’s the personal stuff like: What’s my next travel destination? Explore the North Pole or Antarctica? Do I savour some of the World’s Best 50 fine dining restaurants?

As for the tour guide’s situation, one can be more positive or an optimist like Friedman. So if someone is late, we should see it as the tour guide gaining a bit of time to interact and build relationships with the other members. That way, when the latecomer arrives, we can proudly say “Thank you for being late”!

In a nutshell, no matter how fast changes are, no matter how bad climate change is, or how the world is full of populism, unilateralism, “war-ism” and hate mongering, it’s okay to sometimes slow down, dare to be late (but not too late!) and to “stop and smell the roses”. That’s probably the best and sanest way to live in this Age of Accelerations. 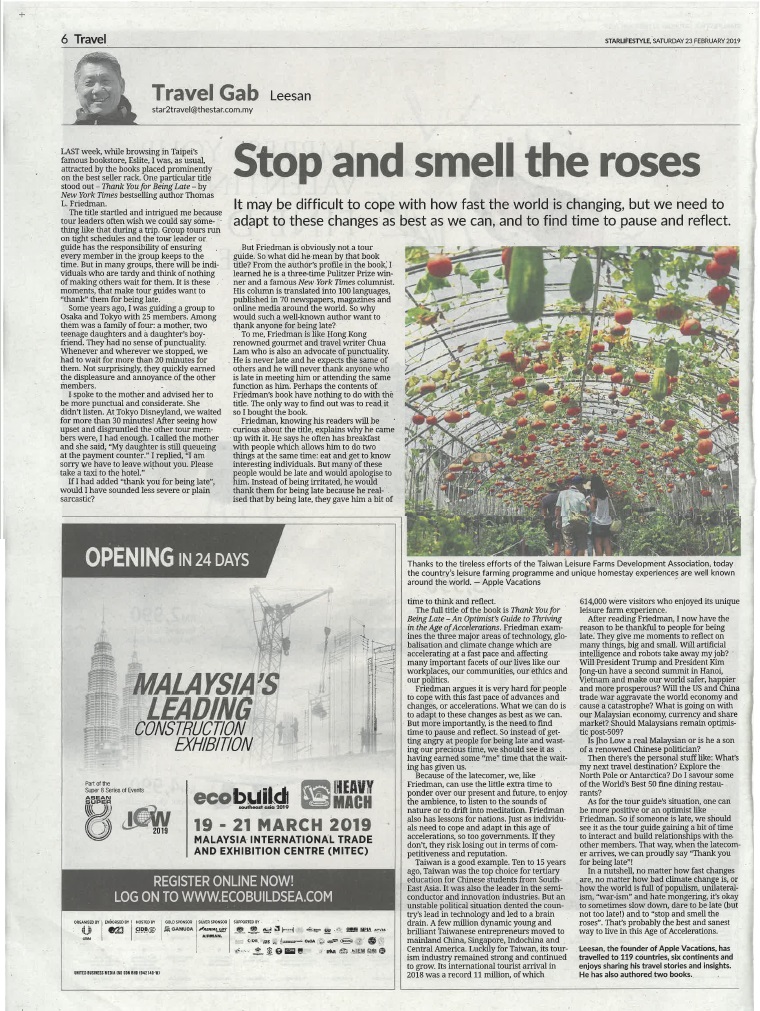 Save Malacca Before It Is Too Late

Off we go, finally! – by leesan