The columnist climbed a mountain, ate delicious abalones and visited a world-class digital art museum at one of South Korea’s top tourist attractions.

WHAT unique charm does Jeju hold that sends millions of people to this island in South Korea each year for holiday? Is it the pristine beaches, black rock formation, the Haenyeo abalone, the black pork, thematic cafes or Mount Hallasan?

Well, yes. It is all of the above, plus Jeju’s unparalleled natural scenery. 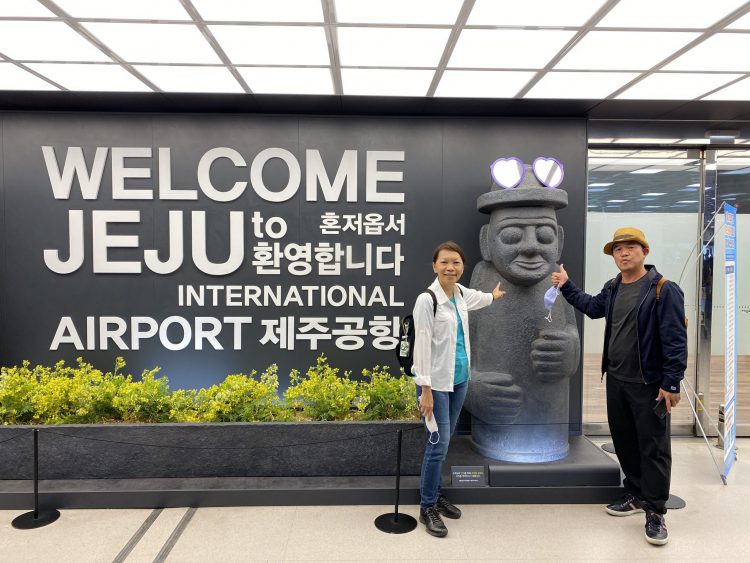 After taking a one-hour flight from the bustling city of Seoul, we landed on the resort-like island of Jeju, where we instantly felt refreshed by the cool air there. As we got to the baggage claim area we saw the striking “Hello Jeju” sign just by the exit; there were many Koreans lining up to take pictures there.

The atmosphere in Jeju kind of reminded me of Hokkaido and Okinawa in Japan, where things are very different from the rest of the country. I think that locals who travel to Jeju would feel like they’re travelling to an exotic destination overseas.

Yes, Jeju looks quite different from the rest of South Korea. Sightseeing and eco-tourism are the main activities here for visitors, and it’s not hard to see why. Our Korean tour guide, Liu, told us that many young Koreans have come to Jeju to develop the island’s tourism industry and spearhead the local creative economy.

Jeju is located 82.8km off the southwestern coast of the Korean peninsula, and is 271km from Busan, another popular city for tourists in South Korea. The island was formed two million years ago from a massive underwater volcanic eruption.

Covering a total land area of 1,847sq km with 258km of coastline, Jeju has a unique elliptical hape that is 73km in length from east to west, and 31km wide from north to south. Nearly half of the 680,000 inhabitants on the main island and 60 other islets make their living from the sea.

The island looks not that much different from any other island in the world to be honest, but in 2019, Jeju welcomed 13.56 million domestic visitors, in addition to 1.73 million international tourists, many of whom were repeat visitors. So, there must be omethingextraordinary about this autonomous island that keeps people coming. 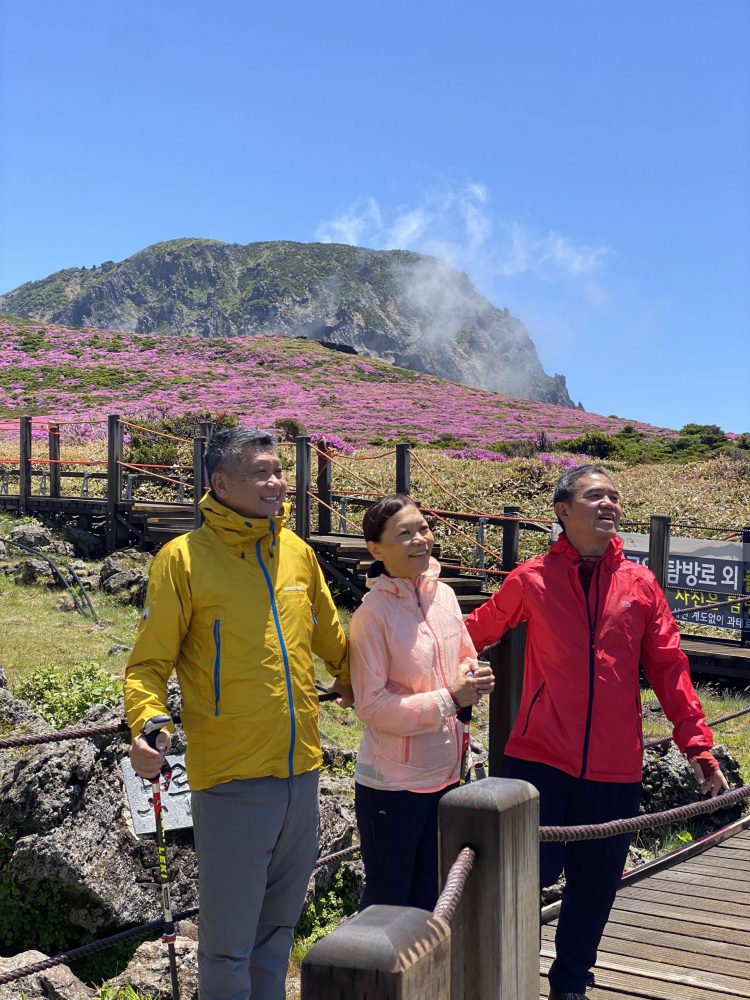 The writer (left) and his travel buddies at the top of Mount Hallasan, which is one of the must-visit places in Jeju.

Hiking Mount Hallasan is a must for any visitor to Jeju. The 1,947m-high mountain perched in the middle of the main island is a national park perfect for trekking any time of the year. The start of the trekking trail is located at Yeongsil at 1,280m above sea level. You will pass by some serene maple forests during the first half hour from here, and I believe this would be a very romantic and idyllic trail in late October autumn.

After that, you will have to climb the stairs encircling the hill upward. Along the way, guard rails have been erected for visitors’ safety while observation decks have been built for hikers to catch the panoramic vista of the surroundings, as well as the plains and coastline in the distance.

Mount Hallasan is the highest peak in South Korea. From here there are several rivers flowing towards the sea in the north and south. Save for the rainy season (May to July), the entire island is otherwise pretty dry. Moreover, as the island was formed after the massive volcanic eruption, the soil structure here is almost entirely lack rock. As a result, any water source on the island can hardly be retained as it drains straight into the open sea.

No wonder Liu said freshwater is extremely precious in Jeju.

As we made our way up to the 1,650m-high hilltop plain, we saw fields of azaleas that were in full bloom. A 1,700m stone mark stands on the slope, where you can find a rest kiosk and other amenities.

However, the trail from the marker to the 1,947m volcanic crater was closed to trekkers due to maintenance works.

From what we were told, there are some 360 little volcanoes around Mount Hallasan as a result of the eruption. Along with the world’s longest 14km lava tube and Seongsan Ilchulbong, the mountain was named a Unesco Natural World Heritage Site in 2007. And in 2010, Jeju Island was named a Global Geopark.

The trek to and from Mount Hallasan typically takes four to five hours, and one word sums up the whole experience: enjoyable!

If you’re not into trekking, don’t worry as Jeju Island has plenty of other offerings for visitors. Did you know that the island is the most popular setting for many K-dramas? I always try my best to include these locations in our Korean itineraries, as they are highly requested. A top location is the Arte Museum which has become one of the most popular new tourist attractions.

According to Liu, the site used to be a speaker manufacturing plant that was later abandoned and renovated. The d’strict technicians injected new “light and sound” elements into the 10m-tall tall hall to give the otherwise dead space a new lease of life, with countless of projectors casting dynamic dreamy light onto a massive mirror. 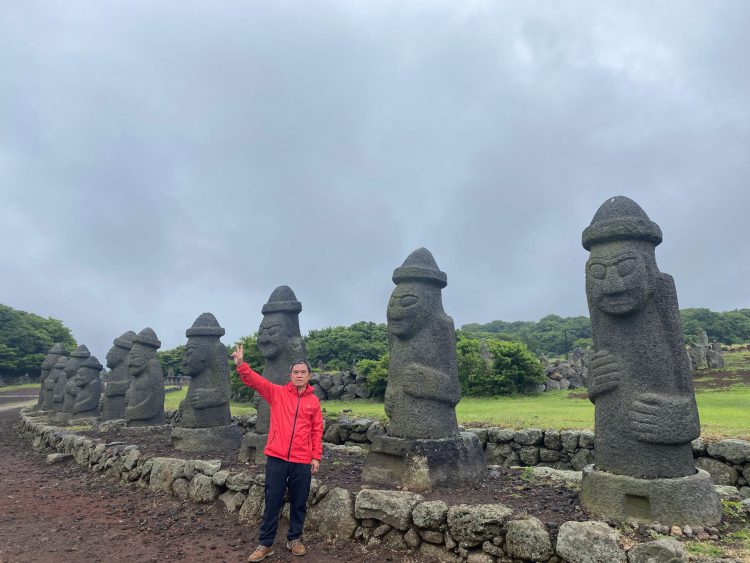 Carved from the island’s volcanic rock, the Dolhareubang statues that you can find at Jeju stand up to 3m high. — Photos: Apple Vacations

This creates a “boundless

expanse of colourful and varied digital artwork, showcasing the infinite extension of space”, instantly transporting visitors to the surreal realm of space travel.

Stepping into a presumably pitch dark secret chamber, the galleries here took us into virtual spaces including an equatorial rainforest, a mysterious outer space, as well as the virtual worlds of some art maestros. I was a little overwhelmed at first, but my entire body slowly started to absorb the immersive experience.

After our visit there, it was time to feast. Most of the islanders make a living from the sea. Haenyeo or female free divers, who used to be the pride of Jeju, have had to adapt with the changing times, setting up their own eateries specialising in delicious abalone porridge, seaweed soup, and many other delicacies.

A visit to Jeju will not be complete without savouring the famous barbecued black pork, egg abalone kimbap and Samdae pork noodle. Even the ordinary coffee and pastries here will make you yearn for more.

Jeju boasts an intrinsically natural and elegant aura. I suggest you spend at least three nights in this idyllic island to fully appreciate everything that it has to offer. 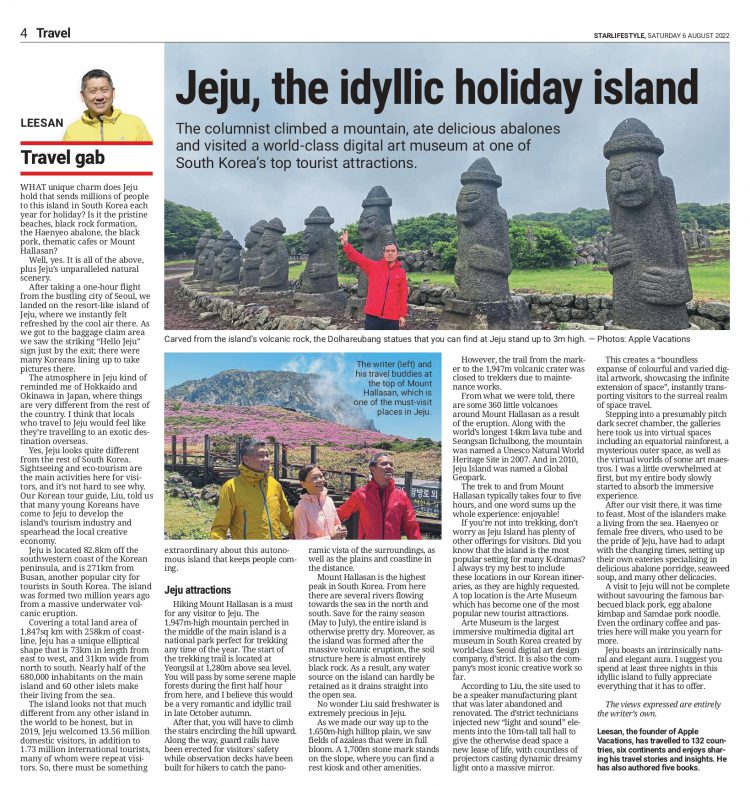 Marriott to debut Courtyard in Malaysia