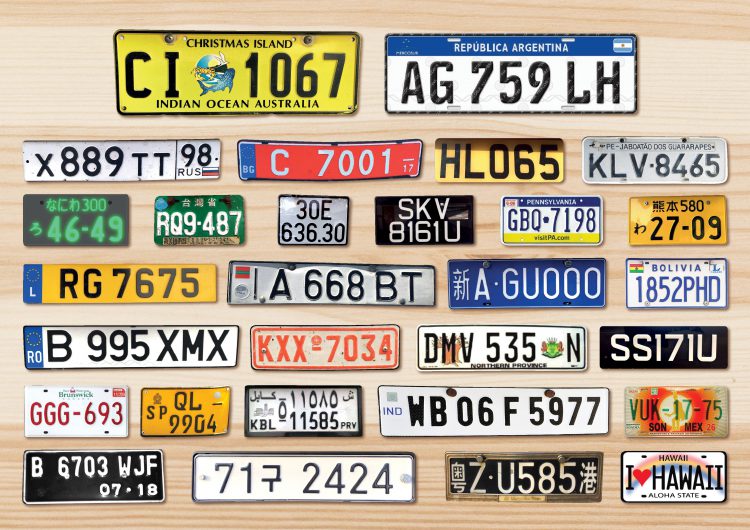 Vehicle plate numbers from around the world. — Leesan

I love vehicle licence plates, strange as that sounds. As Malaysians, we know it as “car number plates” and most would not particularly find them interesting except when we hear of someone paying an incredible amount of money for a fancy number.

But in my travels around the world, I have come to appreciate the beauty of the vehicle licence plate and love taking pictures of unusual ones.

In the Philippines, for example, I saw some number plates that were quite unique. The designs were not standardised and did not follow any sequence or showed letters of the alphabet to indicate which province the vehicles were registered in.

A local tour guide explained that the vehicle registration system went down five years ago and the car plates I saw were temporary ones. A new solution has been implemented which seemed a pity to me as the plates were something interesting to the tourist!

Vehicle licence plates were introduced in the late 19th century by governments for the common purpose of giving transportation vehicles proper identification. France was the first to implement this in 1893, followed by Germany in 1896, the Netherlands and Spain in 1900, the United States in 1901 and Britain in 1904.

In Singapore and Malaysia, the licence plate policy was introduced during the British colonial days.

Over the years, the plates have seen changes in design, font, security features and more, to keep with the times and the advancements in technology. Licence plates around the world are of the standard size of 6×14 inches.

Early licence plates were made of ceramic material which was rather fragile. It was then changed to fibreboard, aluminium and even iron.

Since 1923, governments have taken initiatives to choose fonts that are not easily forged and incorporate unique design elements.

Number plate designs can vary from plain and boring like our Malaysian ones to very nice but complicated-looking ones like in Saudi Arabia.

The choice of typeface for the letters and numbers plays a major factor in how the plate will look.

Malaysian licence plates use the Arial Bold typeface which, to me, is bland and unattractive.

The European Union licence plate utilises the FE-Schrift typeface which was created by the Germans in 2000. It is artistic with a high security feature as it is not easy to forge. The characters can be scanned quickly and are easy to distinguish.

The Americans followed suit in using this German creative typeface on their licence car plates.

My personal favourite is in the Charles Wright typeface which is used in Singapore, Hong Kong and Britain. This typeface is prominent, beautiful and also blends well with the plate background, material and design. It is quite contemporary and I can look at it over and over again.

What makes a licence car plate stand out is when the typeface is matched with a contrasting background, like white characters on a black background or black characters on white or yellow background.

The licence plate can tell quite a lot about a country if you observe it carefully. Landlocked countries which share many borders will normally need to include more details on their licence car plates.

Besides the country’s name, the national flag, zip code and other information can appear on the plate. This can include whether it is a heavy or lightweight vehicle, commercial, private or public vehicle, as well as the month and year of registration.

As for US plates, there is one common feature: they are colourful! Not only that, many of the 50 states include their slogans too, such as Hawaii, Aloha State; Alaska, Last Frontier; Oklahoma, Native America; Florida, Sunshine State and so on. That’s one way for the vehicle owners to promote their home states.

But the country that is beating others in the growth of car ownership is – no surprise – China. In recent years, the sale of motor vehicles there have surged above 10 million units annually. Through road expansions, motor vehicle management and improved transportation systems, the dream of owning a car for 1.4 billion people is rapidly being realised.

For the first, second and third tier cities in China, road space rationing is carried out based on the odd-even last number on the licence plate.

According to a China tour guide, all number plates are made by a special authority, so you may have a new car driven on the road with a temporary car number plate while waiting for a month or two to get a permanent one.

A good licence number and a stylish plate design are the pride of the car owner. I recall how famous Hong Kong star Patrick Tse Yin used a car with the plate number 888 for his wedding which made sensational news in Chinese communities around the world as this is an auspicious number.

Many countries have implemented systems that allow vehicle owners to select their own licence plate numbers, a popular move indeed.

No wonder auspicious numbers and nice letters of the alphabet are usually found on luxury cars. But I suppose if a car is a man’s second love and he has already spent a fortune on it, he should not be stingy about the licence plate. This seems to be a universal principle among car owners, especially the Chinese.

So now you know why I am fascinated by car licence plates. There is certainly more than meets the eye if you only care to take a longer look. Remember that the next time you visit a country and you might end up snapping a photo or two of them. 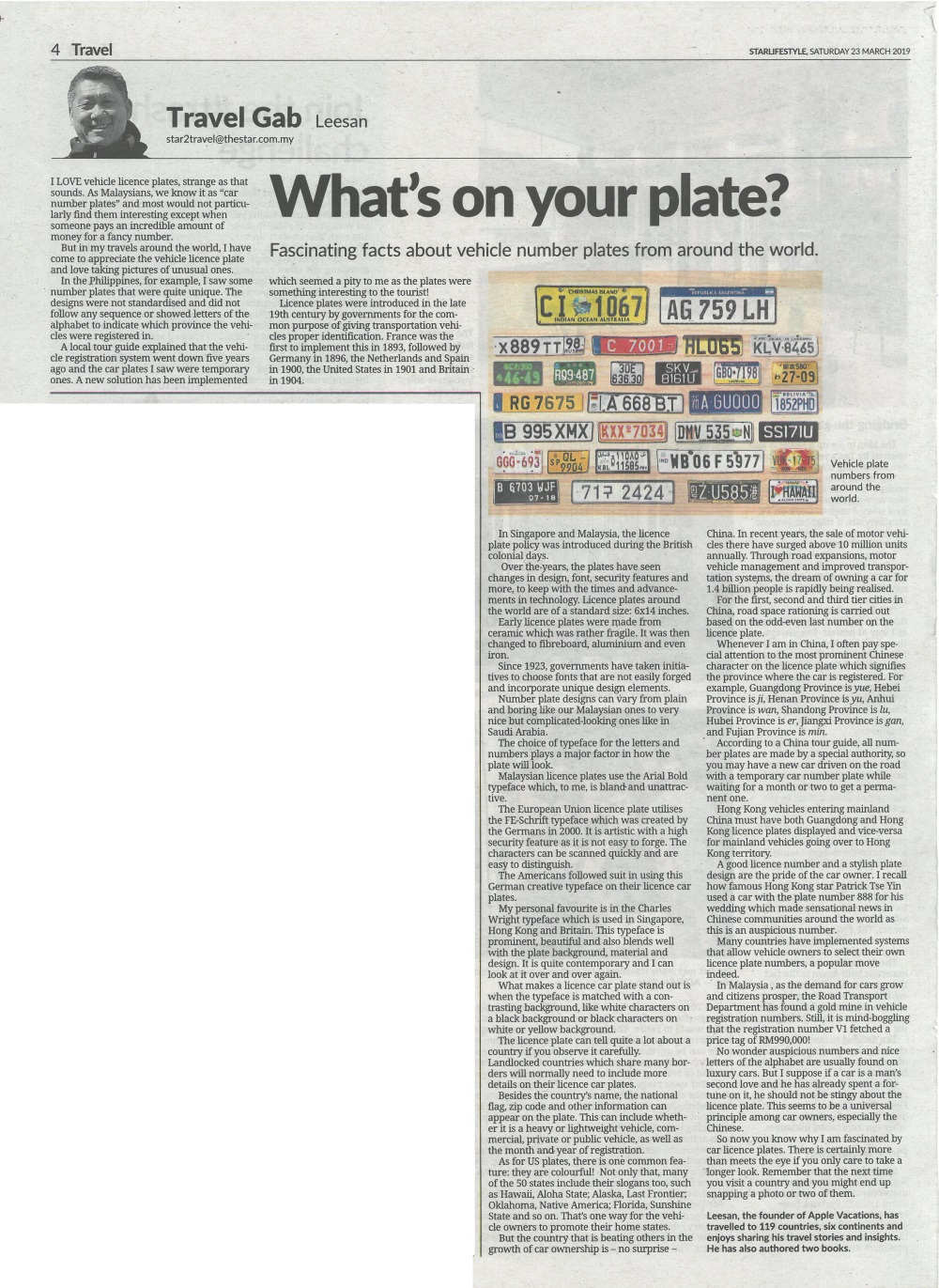