A Silk Road Connection — by Leesan

A Silk Road Connection — by Leesan

Samarkand in Uzbekistan is where one goes to learn about ancient Asian history.

The charm of Samarkand in Uzbekistan,
the ancient crossroads of Asia. 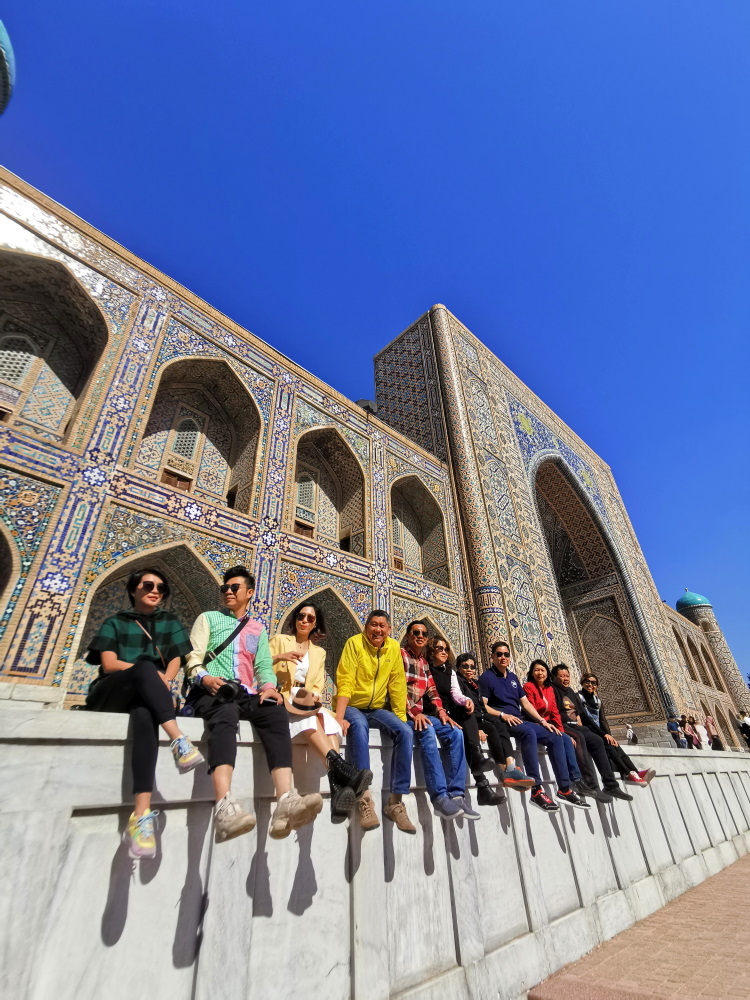 As I sit in a folk music restaurant in Samarkand, Uzbekistan, I catch a glimpse of a beautiful Uzbek lady passing by. She’s tall, has fair skin and cuts an elegant figure. As she turns around, she smiles sweetly – I was totally bowled over by her beauty. I couldn’t help but ask her name. She is Sitora, she says, a fourth year Art student majoring in English literature.

She’s friendly and she’s at the restaurant to celebrate a family member’s birthday. She invites me to dance with them. Soon enough, after a few short interactions, her whole family gathers at my table, bringing the party with them!

Family gatherings are very important in the Uzbek culture and community and this particular family is naturally extending its warm hospitality to me, a stranger. Sitora’s father even offers me a 3l-Russian vodka, and I find that offer hard to refuse.

As my mind drifts into the distance, I feel as though I have travelled back in time to the first century, roaming on the Silk Road. In fact, I am standing at the ancient crossroads of China and the Mediterranean, watching merchants unload dusty sacks of silk, spices, porcelain and other things for trade from the back of camels.

These were the merchants from Europe, Greece, Afghanistan, Iran, Russia and Asia, especially China, who were all set to barter trade. People from the north, south, east and west gathered here not just to trade but to rest, eat, drink and be merry, too. Samarkand was the old city of Central Asia, the crossroads of the ancient silk road. It was a peaceful and thriving city right until the 16th century.

While Samarkand is a World Heritage Site now, what remains of its glory days is only an impression of the Silk Road. But the sculptures of Timurlane, tombs and colourful mosaics of the Registan square with its madrasah have become important tourism features.

As I was told, “Timur-the-lame” was a Turco-Mongol who rose to power in the mid 14th century and established the famous Timur Empire in Central and South Asia. His son and grandson went on to unify Central and South Asia where they established this region as the Islamic cultural centre. His great-grandson invaded India and founded the Mughal Dynasty. India’s famous Taj Mahal was built by Shah Jahan, a 5th generation Mughal Emperor. The Taj Mahal itself was actually a mausoleum of love for his favourite wife, Mumtaz Mahal.

It looks like I have strayed too far from my original topic but I am a tour guide by profession and this is one of the “hazards” of my work.

The writer (seated second from right) and his new friends in Uzbekistan. — Photos: LEESAN 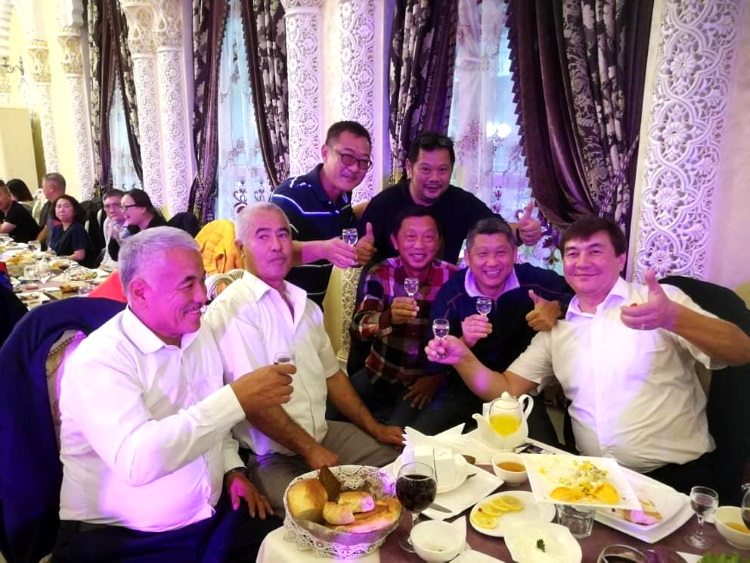 The Kalyan minaret, built in the year 892, is a minaret of the
Po-i-Kalyan mosque complex in Bukhara. 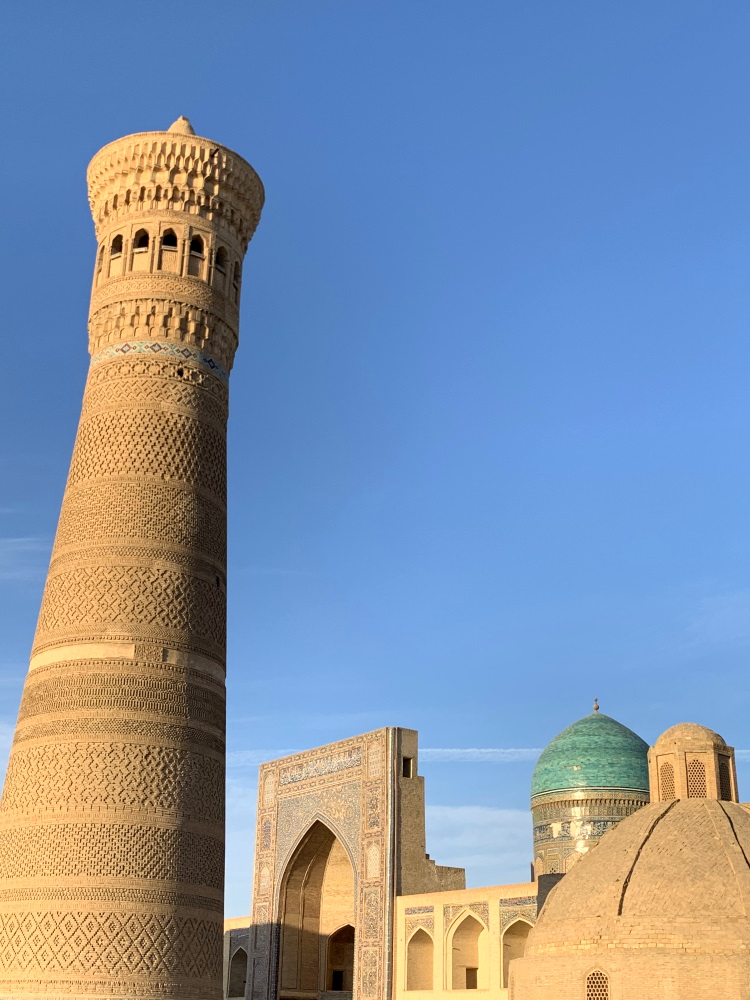 When it comes to Samarkand, it is worth mentioning the story of Xuanzang the Chinese monk who went on a “journey to the West” to obtain the Buddhist scriptures. The journey took him to Samarkand before turning south to Afghanistan; eventually, he arrived in India.

Inspired by this story, I invite Sitora to ride with me on the Akhal-teke horse on the opposite direction of that journey, towards the east. We would be riding through Suyab city, the birthplace of a famous poet named Li Bai, and onwards to Xinjiang before arriving at Chang’an city, the starting point of the Ancient Silk Road.

Suddenly I realise that I have more important things to do, one of which is to hop on the Spanish-manufactured 200km/h high-speed train and travel to the ancient city of Bukhara. I have a mission: to search for the origin of Aladdin’s “magic lamp” in the city of Bukhara, located 256km west of Samarkand.I say my farewell to Sitora and tell her that we could Telegram (an instant messaging app founded by two Russians; the Uzbeks avoid using WhatsApp, while WeChat is also not popular there) each other when we have the time.

Regardless of which text you know – One Thousand and One Nights or The Arabian Nights – the story of Aladdin as told in Chinese, Arabian or even Central Asian by different storytellers, is always the same.

Khoja Nasreddin is a nationwide East Asian hero who combines the incompatible – simplicity and wisdom, experience and naivety, traditionalism and originality.
His unpredictability and ability to enjoy life have always been and will be close to the peoples of the east. 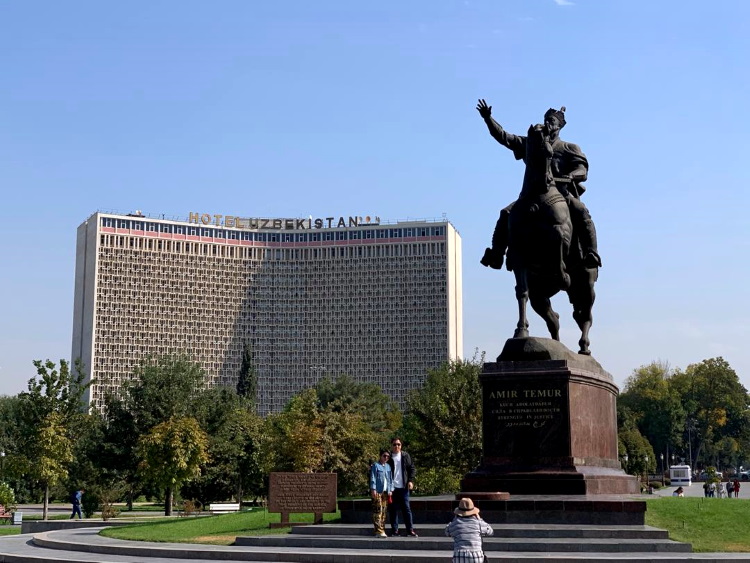 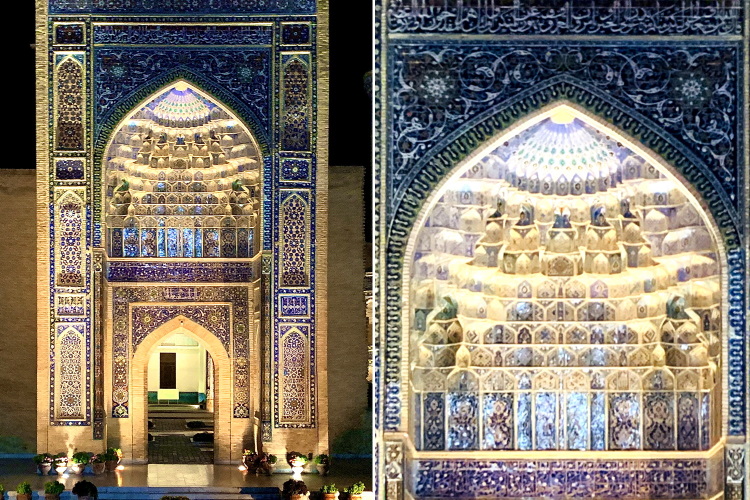 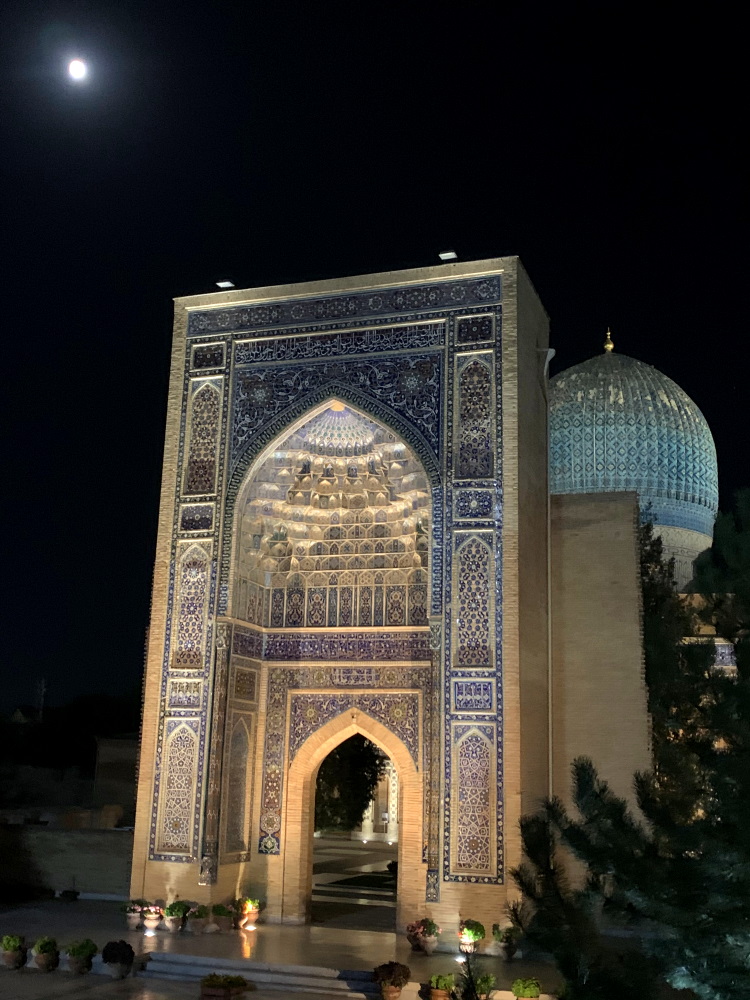 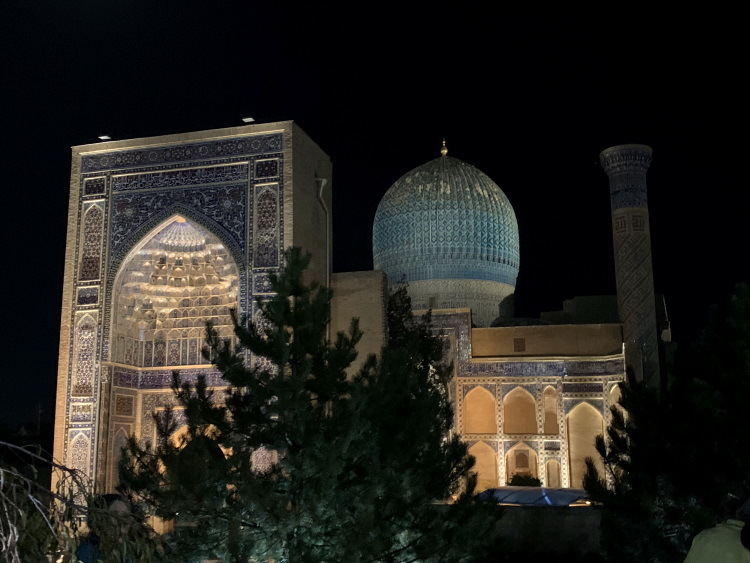 To the people of Bukhara, the ancient “Aladdin’s Lamp” originated from their city, an important place on the Silk Road. It was fortunate that during the siege of Bukhara, Genghis Khan was so impressed with the 46m-tall Kalyan minaret that he ordered it not to be destroyed. Today, 892 years later, I could use this tower as a landmark to begin my shopping spree on the 3km-long ancient street.

It is interesting to note that while almost every stall offers this magic lamp as a souvenir, each of the sellers claim to actually have the original lamp. I was curious about this and wanted to try my luck in getting a genuine lamp from which a genie would pop out of and grant me three wishes. My first wish would definitely be to kick out ruthless politicians from power.

My second wish would be to find Sitora and go for a walk together in Chang’an city and be awed by the Terracotta Warriors. As for my third wish, I will offer it to you with no strings attached.

I have no clue whether the lamp I see in front of me is authentic but I buy it anyway, in case miracles do happen.

As a World Heritage Site, the Po-i-Kalyan Complex built in the 7th century has been well preserved. Among the unique medieval architectures are the Ulugbek Madrasah, mudbrick homes, shops, courtyards, stables which lead to the ancient silk road, inns and bathhouses. All these buildings and structures reflect just how important Bukhara was during its time as a centre for business, food culture, civilisation and religious education.

The Registan building is beautiful but at night,
the view is even more spectacular. 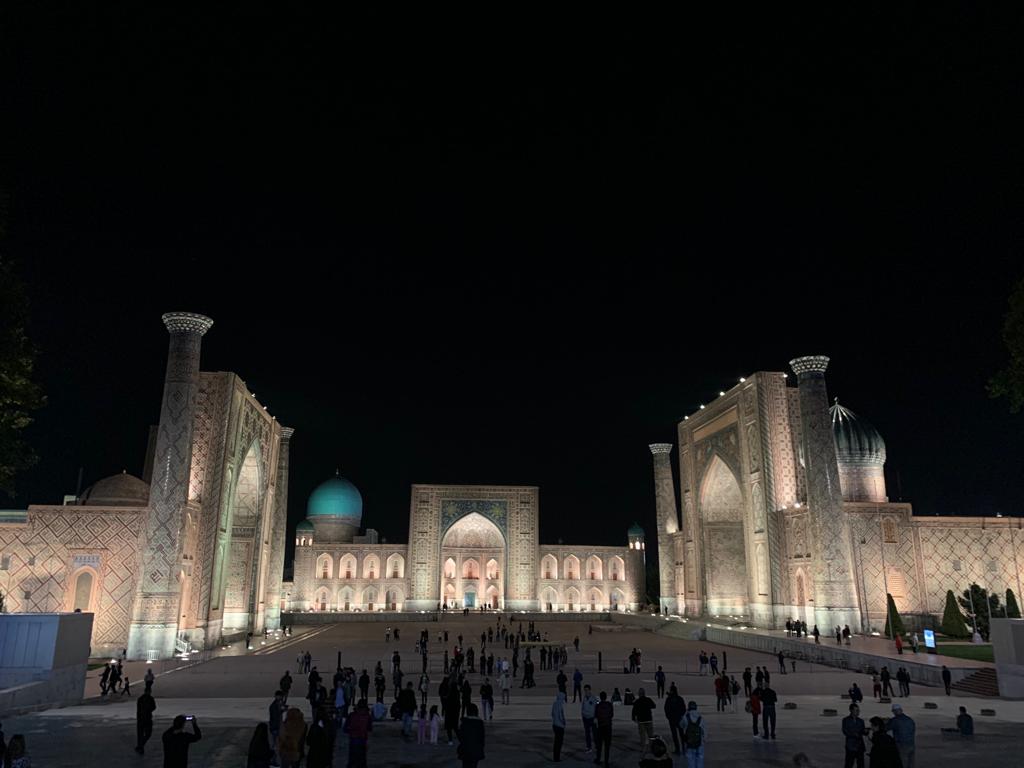 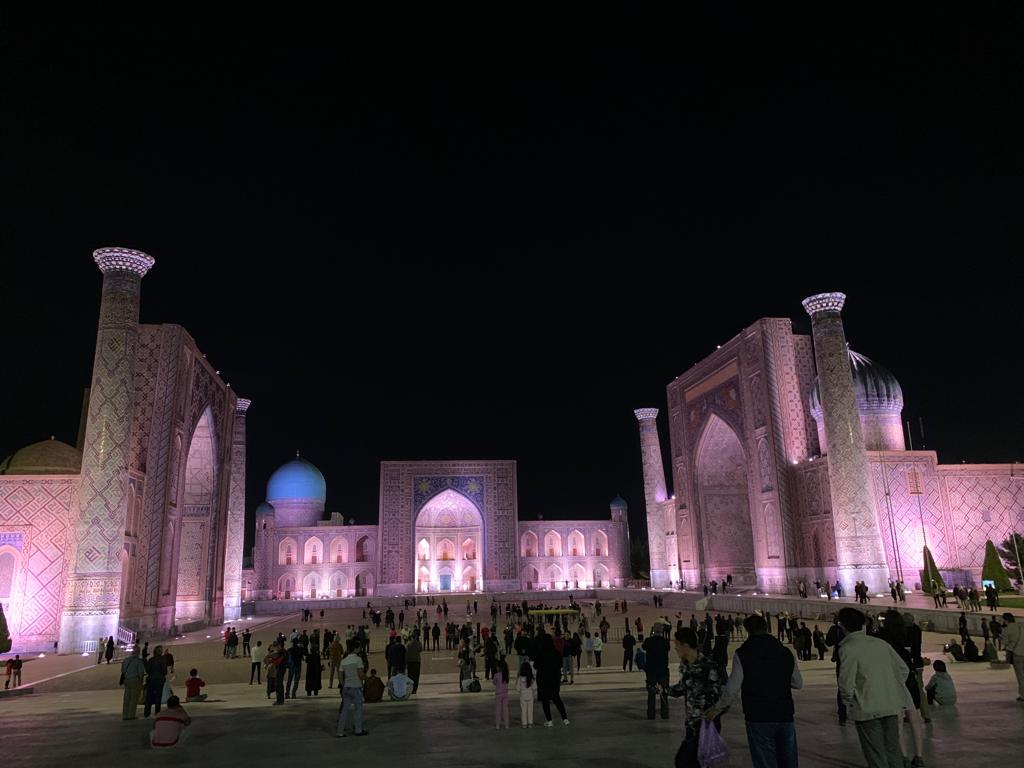 Our guide, while sharing information on the high profile status of Bukhara, tells us that Chinese President Xi Jinping came to Bukhara in 2016. During his visit he went to the Ark Citadel, the epitome of medieval civilisation, and also took the time to admire a rare manuscript of the Quran.

In terms of broadening our knowledge, I certainly appreciate the contribution of the ancient people for every step they made in establishing the Silk Road that connects China and Europe. And it came to my mind that should I be able to lead the hands of Sitora to a journey on the new Belt and Road trail, I will probably be leaving a mark in the history of the future.

Leesan, the founder of Apple Vacations, has travelled to 128 countries, six continents and enjoys sharing his travel stories and insights. He has also authored two books.

The views expressed are entirely the writer’s own.
Published in STAR 2, 14 Dec 2019 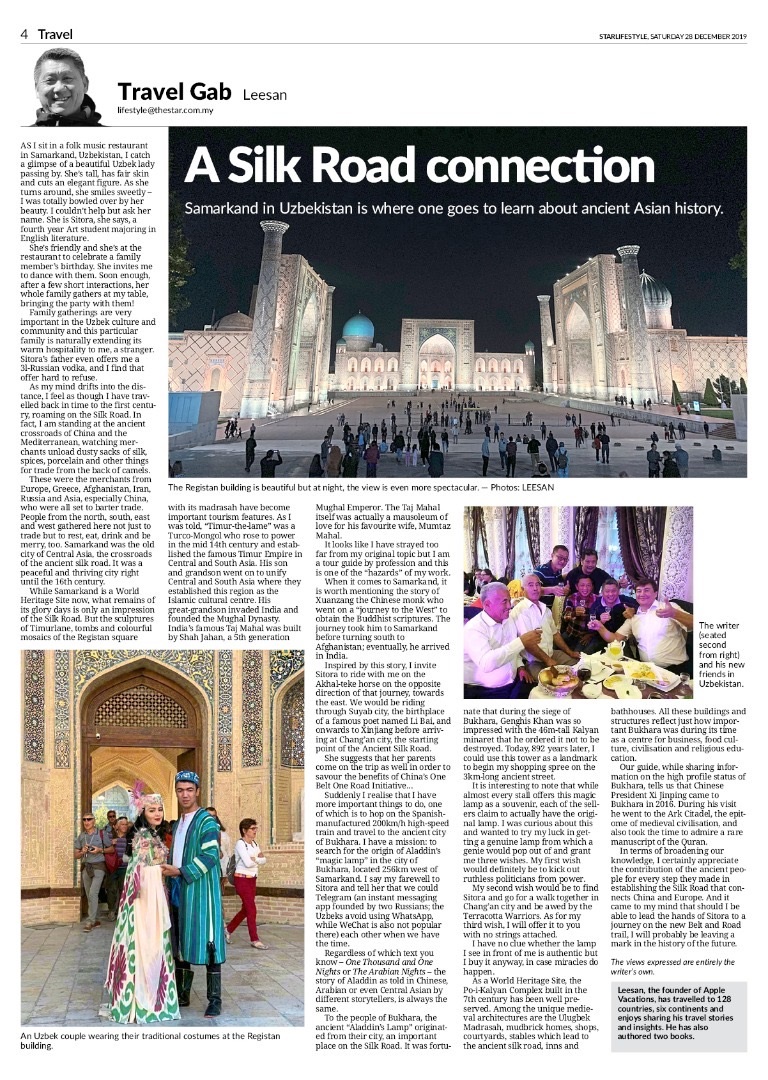 Autumn in my heart — by Leesan