The lure of a cold island in the antarctica was just too captivating for these intrepid travellers. 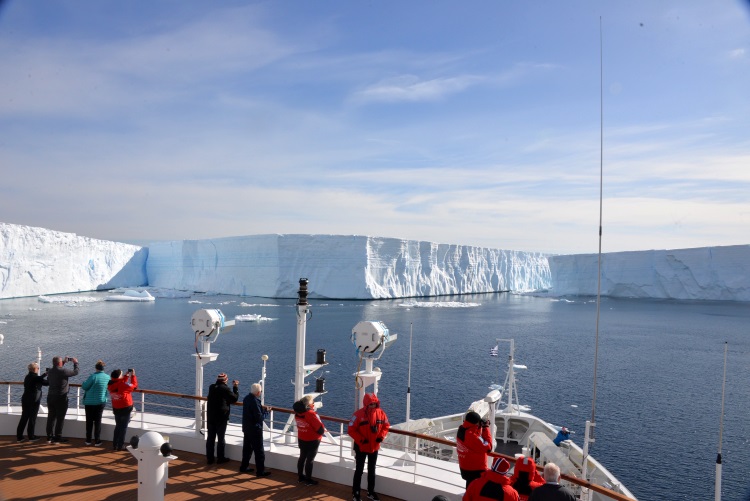 Looking from afar, they looked like at least a hundred floating “soccer fields” in varying sizes drifting in my direction.

ON March 3 at 3pm on the waters of Antarctica (latitude S62°), we were cruising in the rough seas at a speed of 13 knots towards the 1,150sq km King George Island.

The island is known for its nine national research stations. China’s Great Wall Research Station was set up here in 1985, while the Chilean station boasts an airstrip for use of research personnel, as well as tourists.

Actually, visitors come to the island for a plethora of reasons, but for me, I have always wanted to sail across the seemingly dangerous yet assuredly safe Drake Passage.

One of the main reasons is because the 40-hour choppy voyage will invariably reward me with a “life-after-death” experience having eventually landed on this pristine paradise island with its out-of-this-world beauty beckoning.

During my three previous summer expeditions to the Antarctic peninsula, the entire land mass was blanketed in thick snow, so coldly fascinating. This is the sea-son for penguins to cheerfully shed their feathers for new ones as they prepare to usher in the winter.

The newborn chicks will learn from their mothers how to hunt for krills. But this summer, the azure blue sky and velvety white clouds show up unexpectedly in the March sky of Antarctica, with the occasional balmy breezes caressing our cheeks. Although the sunny weather does entrench the natural hues of this frozen continent, the endless stretch of pristine snow fails to cover the entire land mass, the gray-ish rocks and barren galactites conspicuously stealing the limelight from the vast expanse of white.

But, this did not stun me as much as another thing that came into my sight. 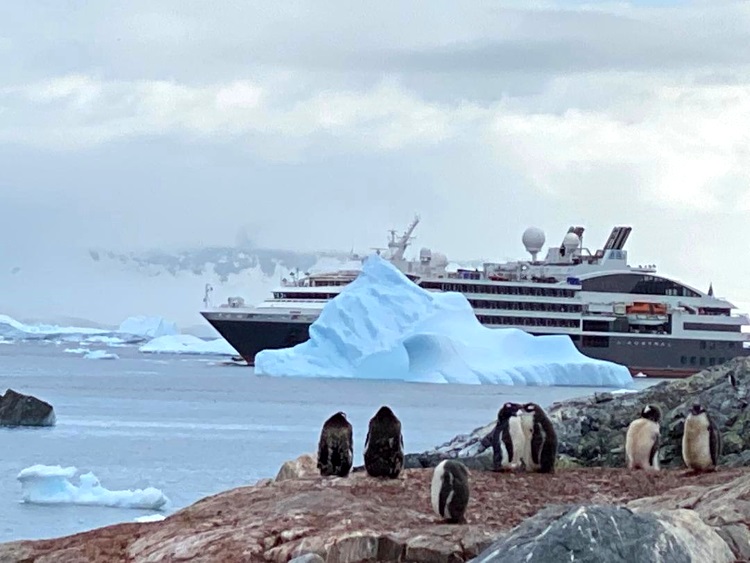 The natural charms of Antarctica are unparalleled 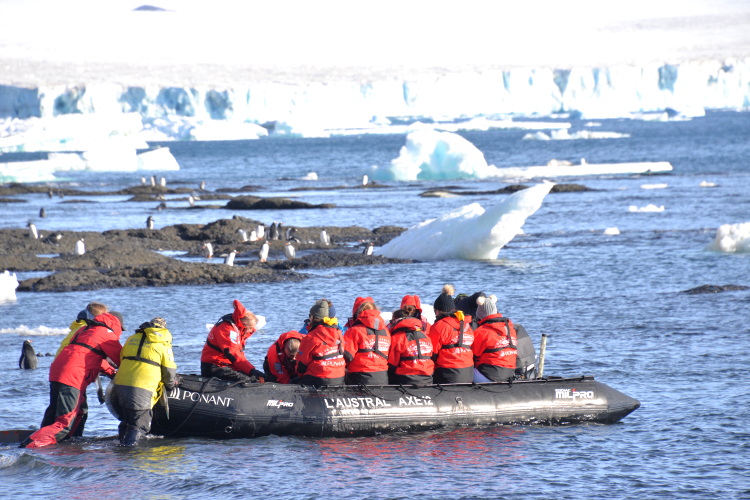 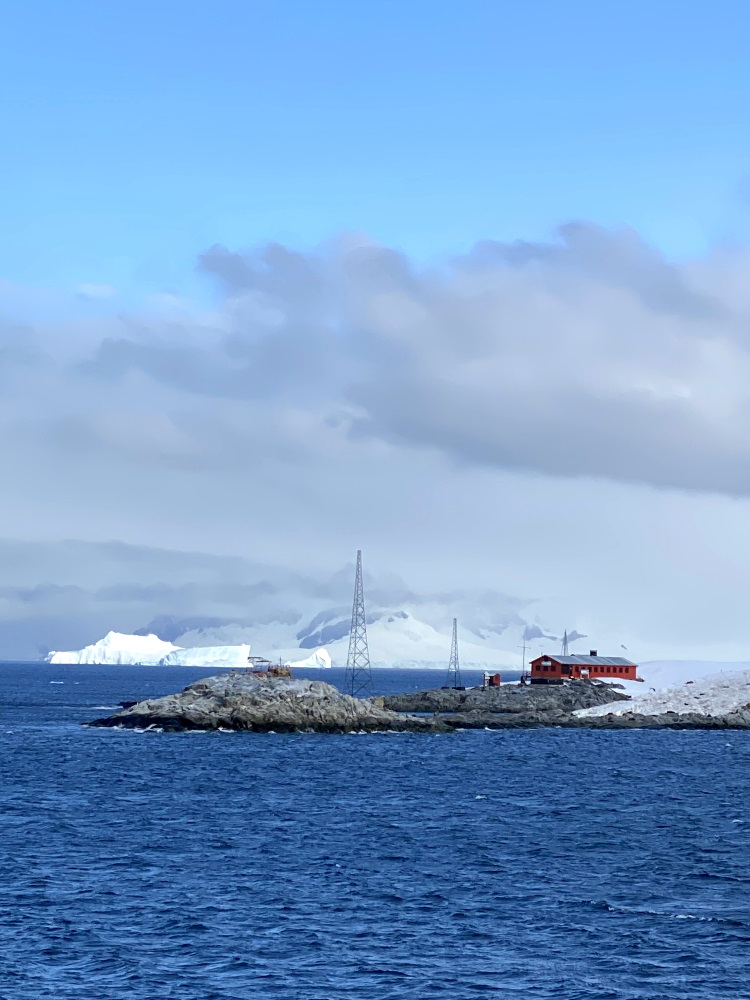 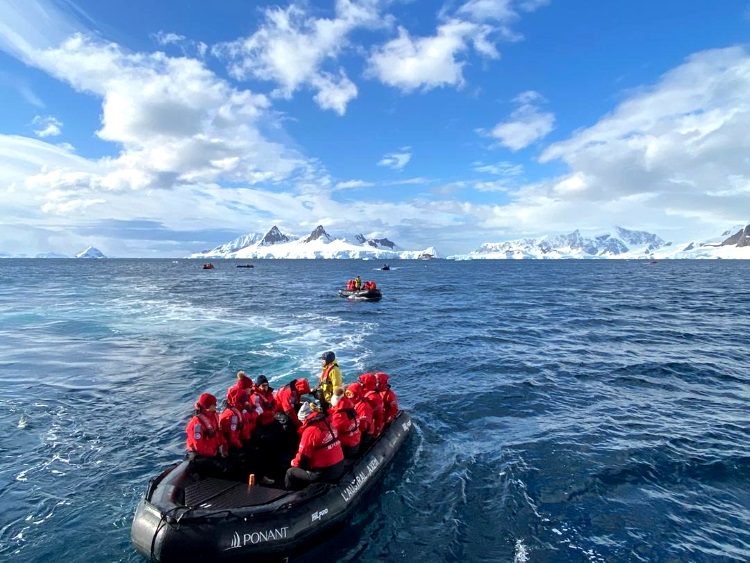 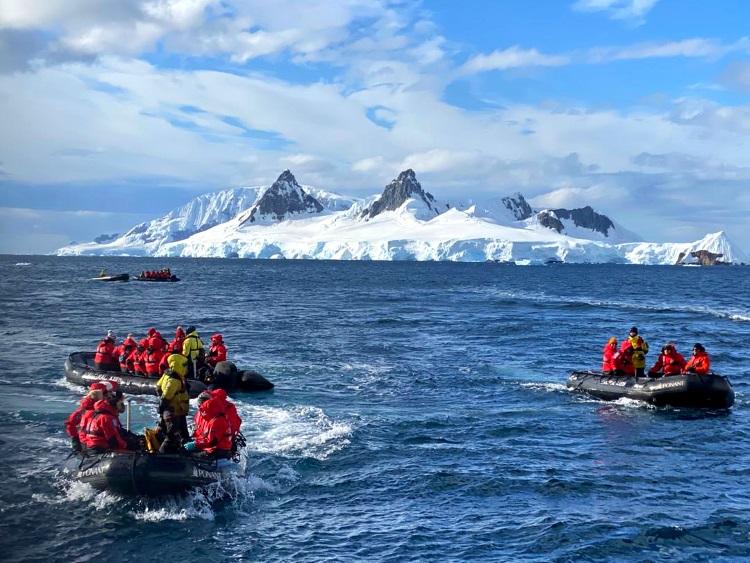 The seven-storey, 9,000-ton ship with a Tricolor flag hoisted above the jackstaff on the bow was sailing in perfect smoothness. Looking towards the furthest horizons from the balcony, popping up before my eyes were hundreds of icy megastructures resembling the Table Mountain of Cape Town.

What could those be? Looking from afar, they looked like at least a hundred floating “soccer fields” in varying sizes drifting in my direction. How dazzlingly beautiful but also nerve-racking. These are mammoth icebergs that have only 10% of their bodies jutting out of the water surface with 90% submerged. My heart was mumbling in restlessness: Holy s***! Is our planet getting sick now?

Before long, the announcer yelled over the intercom: 60 nautical miles ahead, the world’s second largest super iceberg measuring 6,000sq km and codenamed A68 has been detached from the Antarctic continent for over three years now. The giant ice shelf has completely disintegrated! Will the tragedy threatening humanity get intensified by the warming of the Antarctica?

Perhaps, US President Donald Trump, who has been stubbornly arguing that global warming is a big hoax, needs to come here and take a look, or if possible, listen to the woes of the penguins!

Our guide said only one in 25 newborn penguin chicks would eventually get to live, and it appears to me that the warming temperature is hastening the extermination of the penguin population. Should the penguins and whales plead for a green card from the American president to resettle in the Atlantic instead? 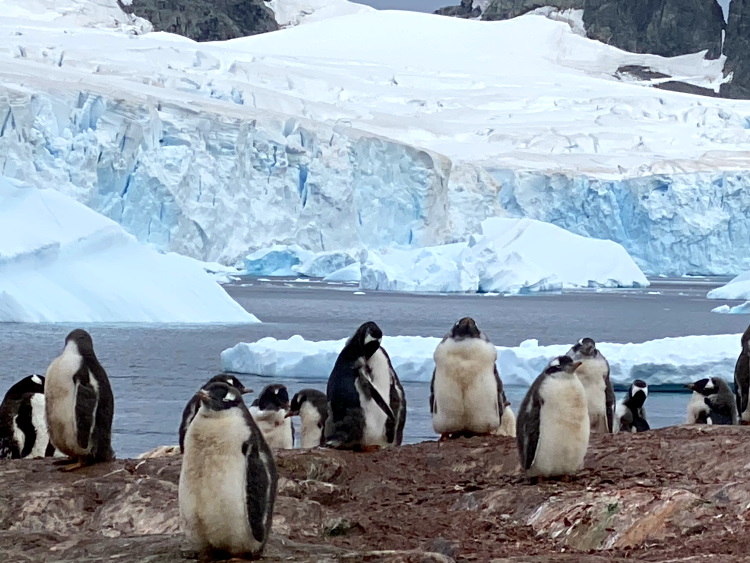 Penguins are
lovely, you’d never tire of watching them in their element. 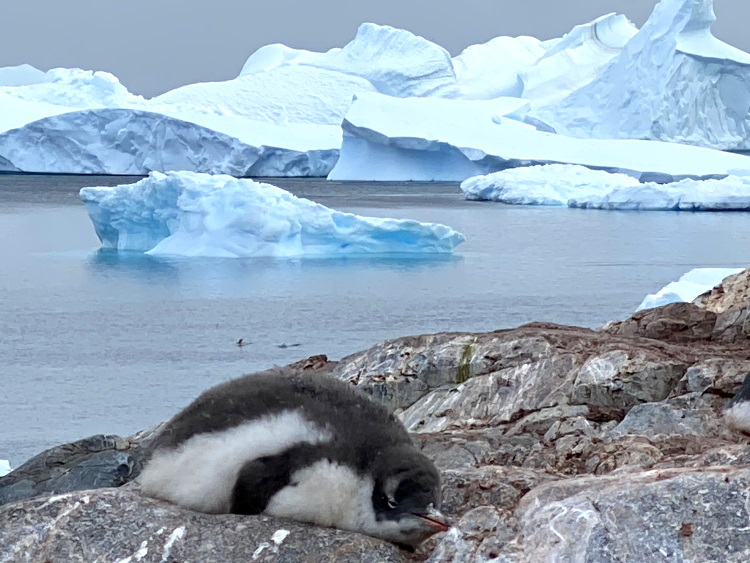 I remember a joint study report by some 70 research stations of 29 nationalities on Antarctica several years back revealed that the speed with which the glaciers are melting away on the continent is beyond our imagination.

And merely four years apart, the Antarctic peninsula looks completely different today. As a matter of fact, scientists are more concerned about the rising sea levels destroying our existing ecosystem as a consequence of melting glaciers. The penguins’ days are numbered if their sole source of food – krill – does not survive. Moreover, through my close encounter with these vulnerable feathered creatures on five of the sea coasts we landed on in the peninsula over the last several days, I realise that the snow on the coast is gone and galactite rocks are littered on the damp, exposed ground, along with patches of seaweed washed ashore.

The soiled penguins look helpless or even distressed because their doomsday is near. Could that predate the end of humanity on this planet?

Fortunately the dreaded Covid19 has yet to make landfall on the icy continent. Perhaps these penguins should adopt a nomadic lifestyle, travelling further south to seek new safe abode!

I was holding a glass of champagne, quietly admiring the natural marvels along the coastline from the balcony of my cabin. Although we have been flanked by massive icebergs throughout much of the voyage, as the French captain announced over the intercom, due to the freezing weather this ship has never like now sailed so close to the coastline. This time around, though, we are lucky enough to be able to skirt the coastline so inconceivably easily.

Now that the A68 in front of us has splintered from the parent ice shelf, we may very much anticipate thousands of icy megaliths drifting in the waters. As a matter of fact, there is nothing much the human uncalled for changes of Mother Nature. Let’s just submissively bid the glaciers adieu! Indeed, if we were to come back to Antarctica in say two or three years’ time, these floating icebergs could very likely become a thing of the past by then! A68 in front of us has splintered from the parent ice shelf. 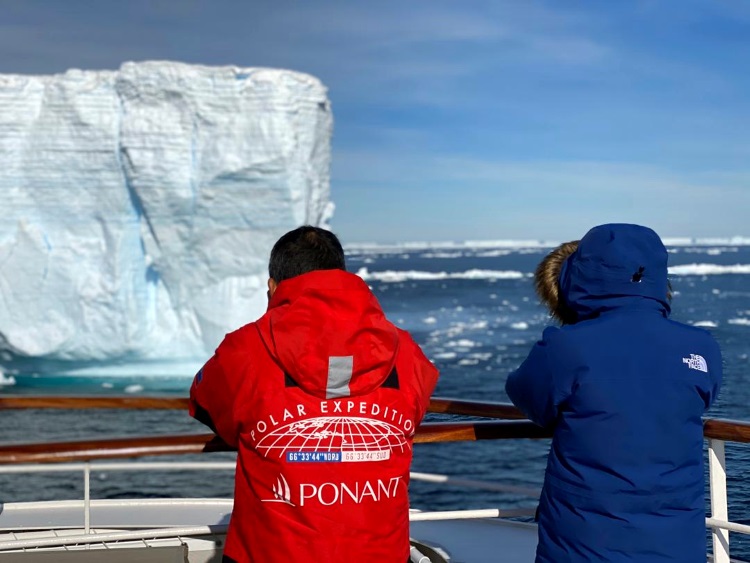 The natural charms of Antarctica are unparalleled. Even as the 1,500km long Antarctic peninsula lying between the latitudes of S58° and S67° indeed looks different today, the entire continent is basically intact, its beauty still unspoiled. Hopefully the ecosystem on the continent will continue to guard this planet of ours. Yes, for as long as it still can!

Those of you still excited about exploring Antarctica should do something right now instead of getting excessively thrilled by the thought of it. The planet’s last remaining peaceful paradise is being slowly gobbled up by human vices. To be honest, the Antarctic peninsula is not that inaccessible after all, but the thing is, it may not wait too long for you! 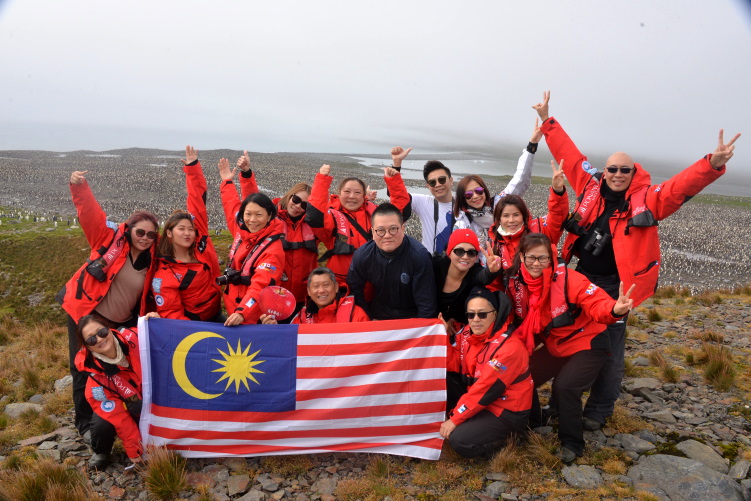 Well done, Malaysians! the columnist and his group made it down south to antarctica in early March. this was Leesan’s fourth trip to the continent. — leesan 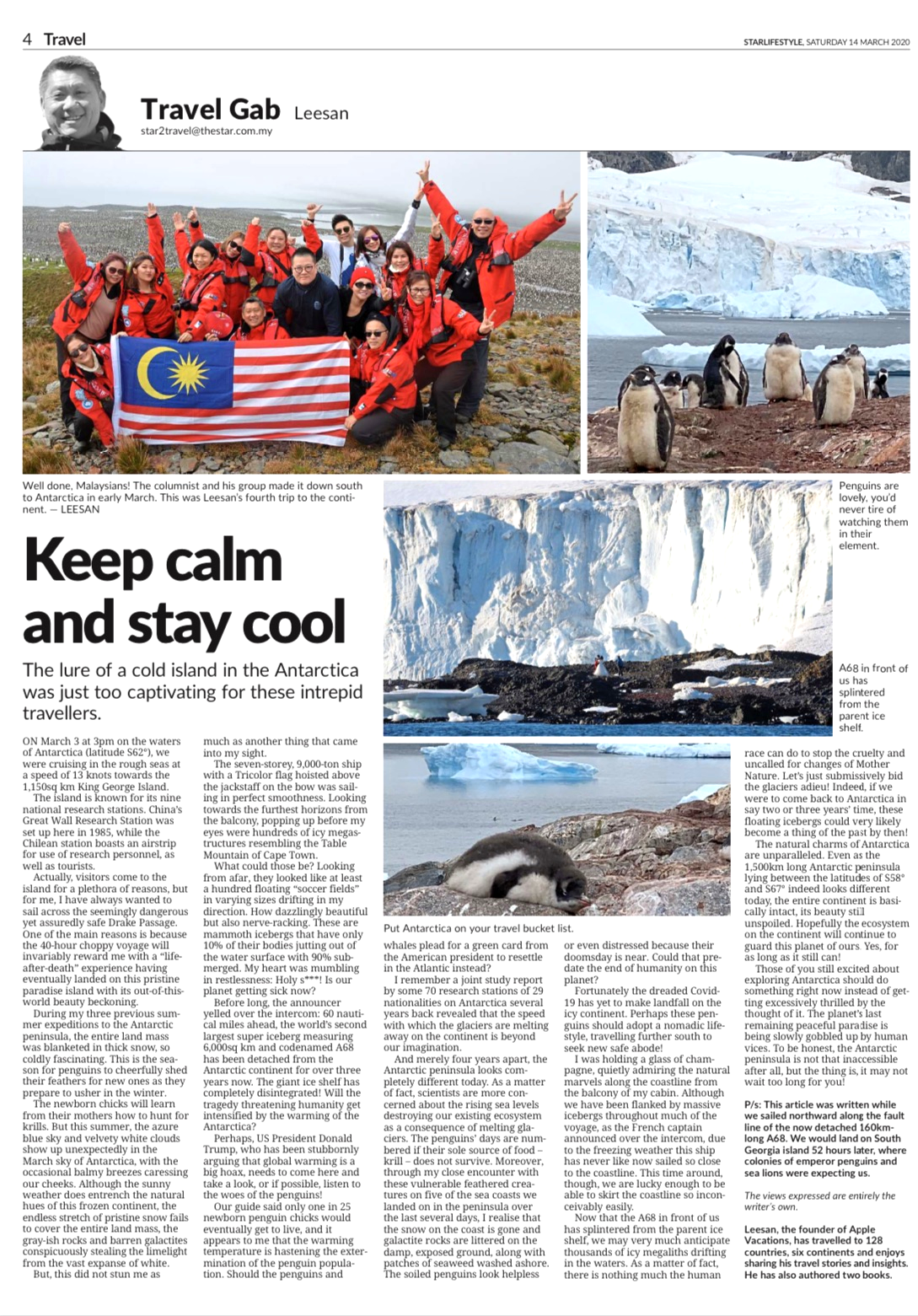