Among the 196 member states in the UN are countries that don’t accept each other’s status. Nevertheless, they are all sovereign countries recognised in accordance to the UN charter. 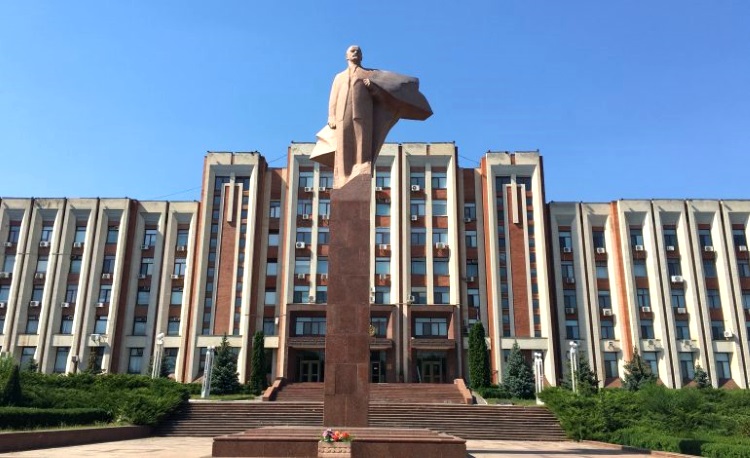 Transnistria used to be part of the Soviet Union but today, it is a rump state. Photo: Leesan

In 1850, a person looking for interesting places to visit could have considered sovereign states like the Kingdom of Ankole, the Austrian Empire, the Kingdom of Joseon, the Kingdom of Janjero, the Ryukyu Kingdom, the Principality of Waldeck and Pyrmontor, the Khanate of Kokand, and the Sulu Sultanate.

If you have never heard of these places and can’t find them on a map, that’s understandable. That’s because by 1930, none of these states existed as they were either annexed, conquered, renamed, dissolved or colonised.

Fast forward to 2000 and maps look different again. You could pick up to 15 new countries that popped up after the breakup of the Soviet Union in 1991. These include Georgia, Uzbekistan, Kazakhstan, Tajikistan, Armenia, Ukraine, Moldova and Lithuania.

And let’s not forget the merging of East and West Germany as a single country in 1990 after the fall of the Berlin Wall in 1989.

This is the geopolitical state of the world. It is never static and changes as nations rise, fall, and sometimes rise again. But as new states evolve, there are bits and pieces of a territory that fall into political ambiguity. These are the so-called rump states and there are about 50 of them today, unrecognised and largely unnoticed.

According to Wikipedia, a rump state is a “remnant of a once much larger state, left with a reduced territory in the wake of secession, annexation, occupation, decolonisation, or a successful coup d’etat or revolution on part of its former territory”. 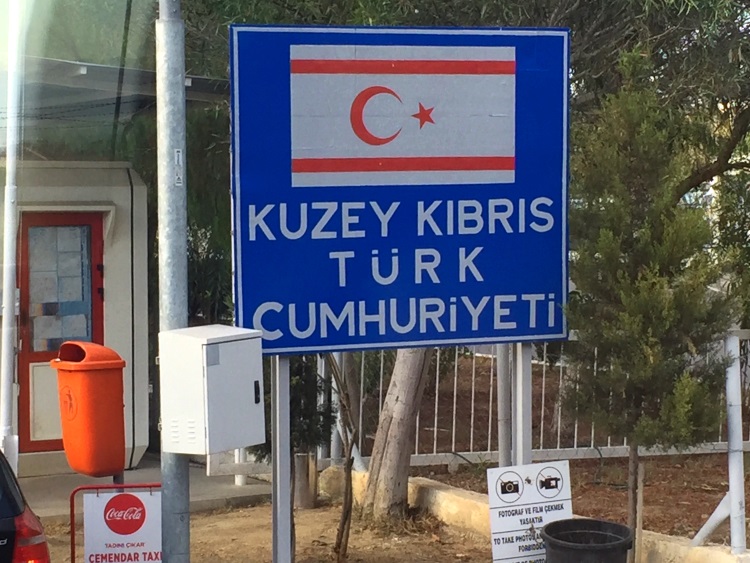 The Republic of Cyprus joined the European Union in 2004, making it easier to travel to Northern Cyprus.

The best examples of rump states in the 21st century are the Turkish Republic of Northern Cyprus, Taiwan, and a really tiny place that you probably have never heard of, Transnistria, that came into being after the Soviet Union breakup.An article on Wired.com described Transnistria as “a thin strip of land wedged between Moldova and Ukraine. (It is) home to more than 500,000 people and has a parliamentary government, a standing army, and its own currency. It has all the trappings of an independent nation – but isn’t.”

This is strange because Transnistria actually fulfils all the four criteria for becoming a nation – a defined territory, a permanent population, a government, and a capacity to enter into relations with other states (as stipulated by the international consensus in Article 1 of the Montevideo Convention on the Rights and Duties of States in the 1930s).

Taiwan, for that matter, also fulfils the criteria but is not internationally recognised as a sovereign nation. These two “wannabe” nations are therefore known as rump states as they were each a remnant of bigger territories.

Despite being in this situation, some of these countries have their own passports, their citizens can travel freely around the world, and even participate in travel and trade events.

Another criterion cited when it comes to nationhood is that a sovereign state must have a legitimate seat in the United Nations and gain recognition by its member states. The Vatican does not meet the four criteria of statehood but it is still recognised by the UN as a sovereign state. So there are other forces at play here.

Among the 196 member states in the UN are countries that don’t accept each other’s status. Nevertheless, they are all sovereign countries recognised in accordance to the UN charter.

Taiwan used to be a UN member. But after it was booted out in 1971 when the General Assembly voted to admit the People’s Republic of China, Taiwan started losing recognition from member states. However, there are still 18 (compared to 68 in 1969) member states that recognise Taiwan as a sovereign state and have mutual embassies.

Taiwan also set up “Representative Offices” in several sovereign countries, including Malaysia, where it is called the Taipei Economic and Cultural Office. Through such adroit diplomacy, the Taiwanese passport has gained international acceptance and is regarded to have an “identity”.

The people of Transnistria are not so lucky. Their “country” is not accepted by any government and is considered by the UN as part of Moldova. The people in Northern Cyprus are also in a similar situation. Only Turkey recognises it as a state, but its people have to hold Turkish passports. 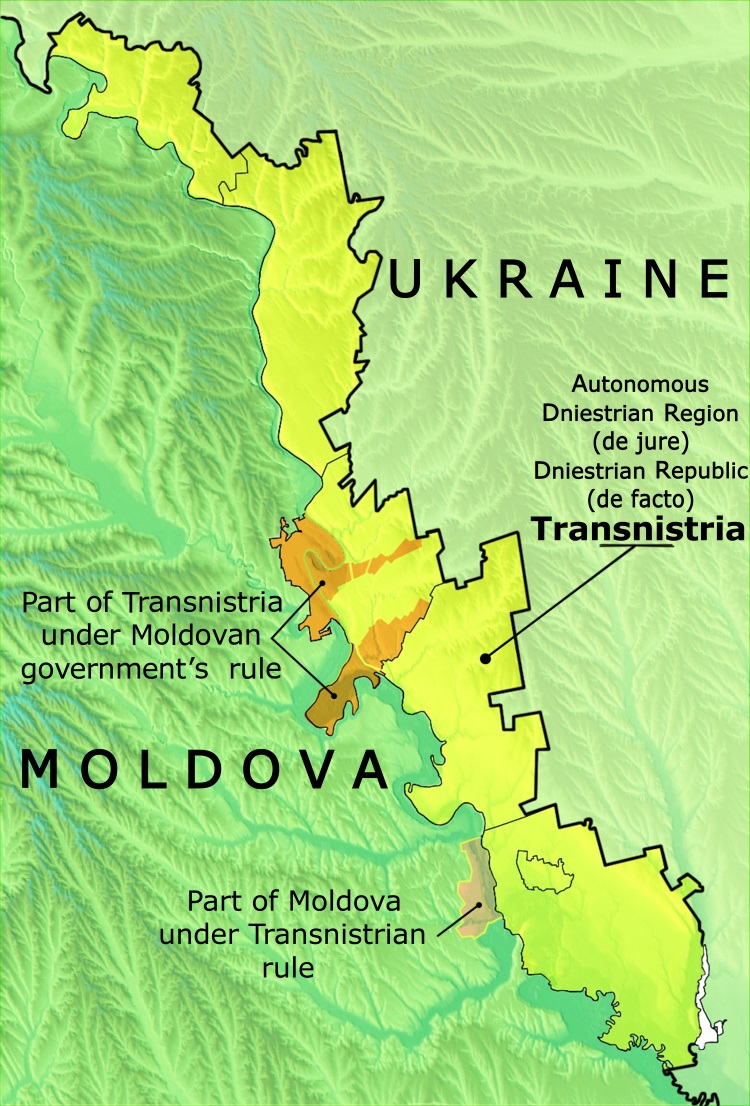 Transnistria is a thin strip of land wedged between Moldova and Ukraine.

Tour agencies generally avoid arranging visits to these isolated countries. That’s because without international recognition status, it might be difficult to get help should a critical situation arise in these places. But when we do take tourists to established and stable rump states like Taiwan, they are fascinated by the history and political drama behind these places.

The political world map has been the same since 2011 when the world’s newest nation, South Sudan, declared its independence and gained UN recognition. Before that, it was Kosovo in 2008.

The world’s rump states may consider themselves the legitimate power and owners of the land they claim, but their path to total independence is extremely tough because of their weak diplomatic influence, and the unwillingness of neighbouring nations or the countries they were once a part of to compromise or accept them.

Perhaps the “one country, two systems” policy of Hong Kong and Macau could be a possible solution, if the affected states can put aside political hubris and nationalistic pride. But who knows what the future holds for the world.

Today’s rump state could still be tomorrow’s potential super power, And powerful nations can come tumbling down, just as seemingly invincible empires of the past crumbled. Indeed, in 2030, we tour guides could very well have new stories to tell about nations we never anticipated in 2019. 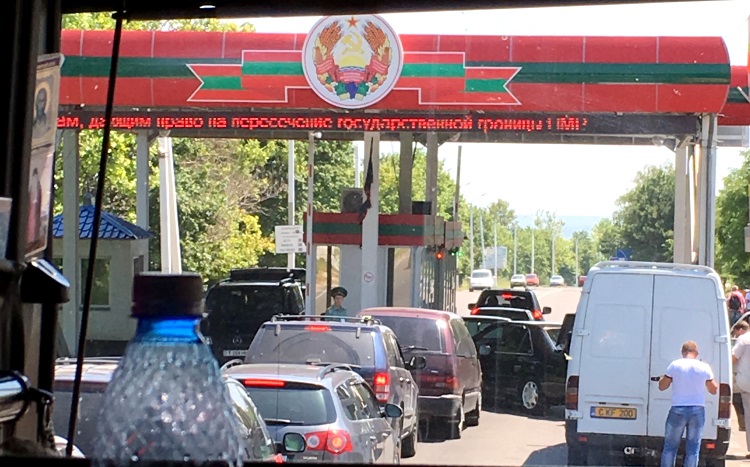 There’s always some tension at the border between Moldova and Transnistria. 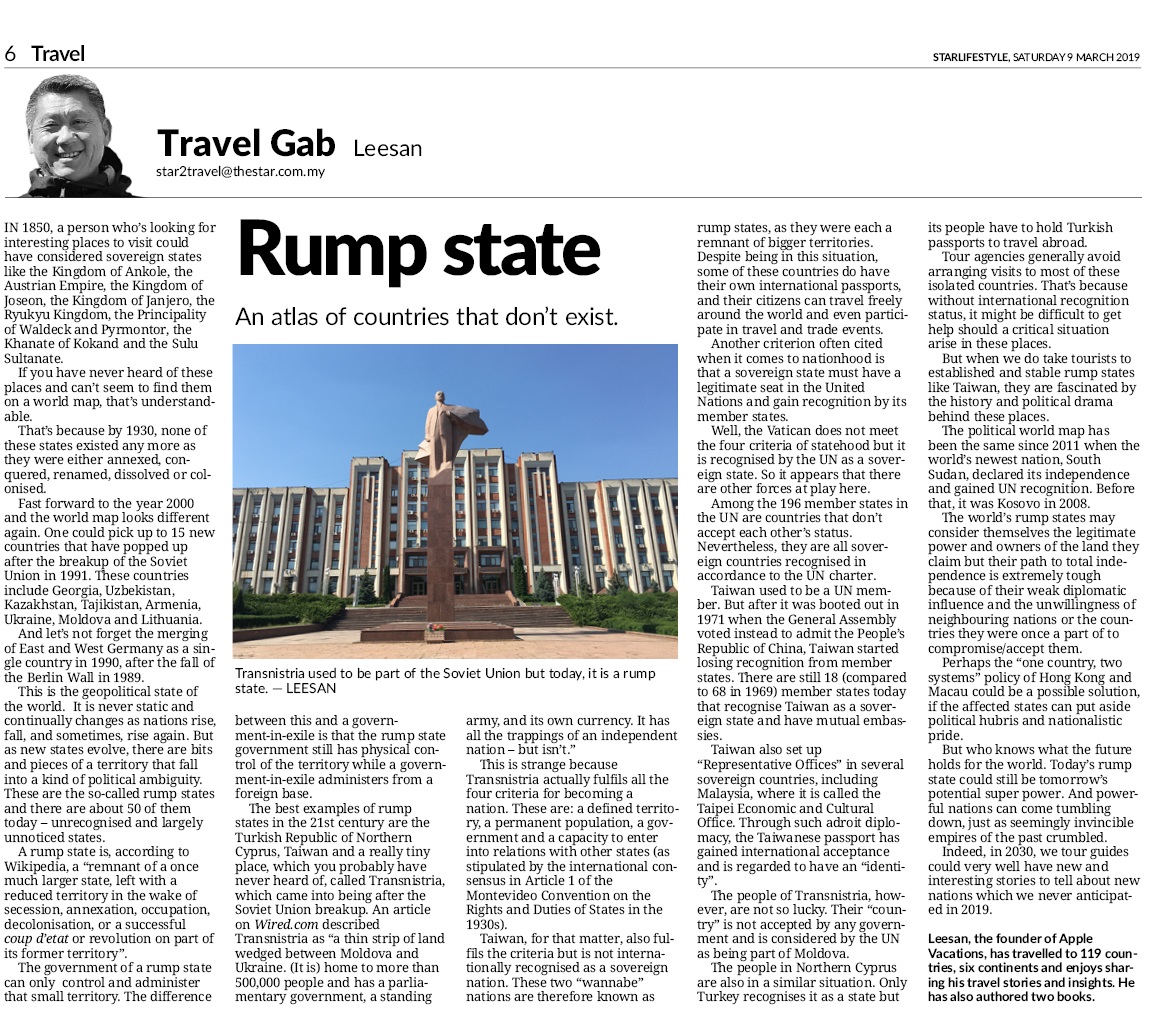 An adventure to the waters of Amazon — by Leesan

影片：2017年 • 大马首家万怡酒店（Video: The First Courtyard by Marriott Melaka in Malaysia, by 2017）