A miror of the sky — by Leesan

It’s hard to imagine there’s a salt flat 16 times the size of Singapore on the Andes Mountains, South America.

A miror of the sky — by Leesan

The Uyuni Salt Flat in Bolivia is simply breathtaking. 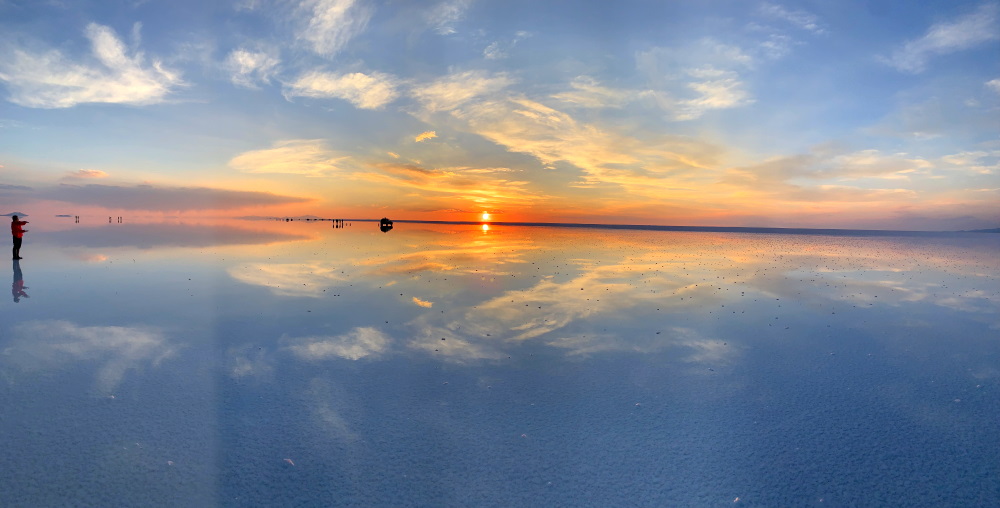 Slipping on my rubber boots, I step into the big pool that has a depth of about 8cm. Standing between the never-ending sea of white, I seem to have lost my bearings.

When the ripples on the pool stop and form a mirror, the water, blue sky and white clouds meld together, producing a paradise where the heavens and the Earth are connected. At this moment, I feel so close to the sky that I can reach out and touch it. How exhilarating!

My breathing accelerates; I’ve forgotten I’m 3,656m above sea level, where the oxygen is only 60% of the air. No wonder I’m dizzy.

It’s hard to imagine there’s a salt flat 16 times the size of Singapore on the Andes Mountains, South America. The area spans about 250km from east to west, around 100km from north to south, for a total of 10,582 sq km. It’s full of quality rock salt. Welcome to Bolivia’s Uyuni, the largest salt flat on Earth

After our 4WD cruised for 90 minutes on the flat, and the GPS started to lose track of our location, it really felt like being isolated from the world. In that moment of peace, take time to reflect and find yourself.

The white ground and blue sky seem to fuse into a seamless expanse. Is this the appearance of the legendary mirrored realm?

Our guide, Marao, says that during the rainy season from January to March, 70% of the flat will accumulate 5-8cm of rainwater. The role of this lake is crucial, he adds. At this point, the cold autumn wind hits my face.

Under the sunshine, the salt particles sparkle in the water with diamond-like brilliance, shimmering dreamily. The salt minerals transform into a mirror with the help of the saltwater. It’s beautiful.

It’s not surprising that this mirror effect is a favourite experience for Japanese travellers. It’s an alluring event that invokes a feeling different from witnessing the Northern Lights, with no less the impact. In fact, travellers care more about the sunset, a highlight on the lake. Hundreds of vehicles are everywhere, rushing to catch the setting sun.

Like an experienced cinematographer, Marao composes all kinds of poses for group members. My favourite is the ‘evolution pose’ across the sunset, which has a ‘circle of life’ vibe. At this point, a fellow traveller shouted gleefully, “Salt Lake, the mirror of the sky, purify my soul and release my spirit!”

Taking pictures like this is part of the thrill when visiting Uyuni.

At the centre of the flat, I came upon a dilapidated building. It’s said that its completion 25 years ago, it was the first hotel in the world built with 100% salt bricks. However, the sewage system posed an enormous challenge – an invisible killer. As a result, the hotel was shut down by environmentalists.

In 2007, a new ‘Palace of Salt’ was built on the shores of the flat, which is worth staying a night. This hotel is a lot more environmentally-friendly, something we all need to think about to ensure the next generation get to enjoy the natural beauty we do now.

Though relatively poor, Bolivia’s move in ensuring the right environmental measures are taken where the lake is concerned is to be praised.

We spend a whole day in the desolate Uyuni. Thankfully, it comes with an environmentally-friendly toilet. This is a vital point that Baikal winter ice lake operators in Siberia, Russia, ought to emulate. All public facilities at Uyuni are mobile in design, including a portable ‘restaurant’ in the middle of the place. 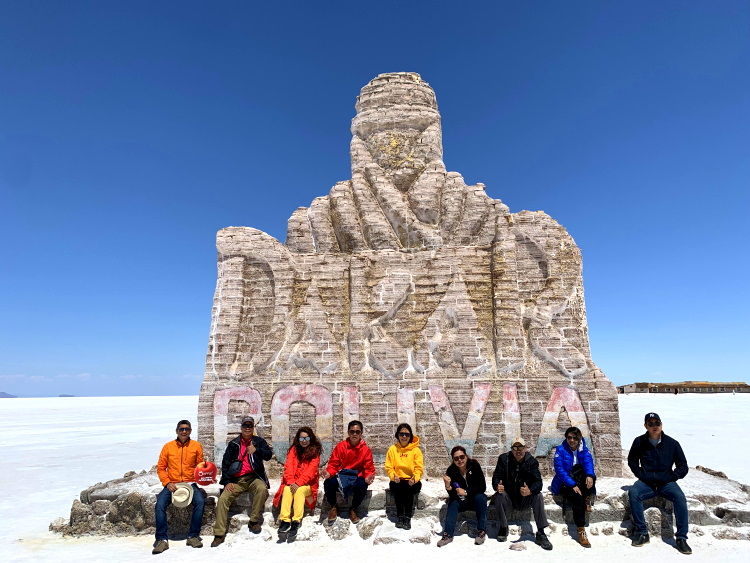 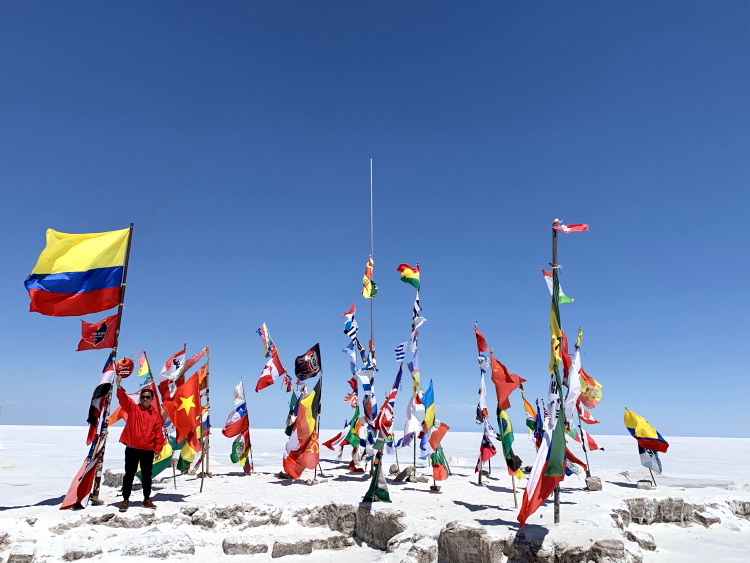 The drivers here are civilised. No garbage gets left behind, so everything gets restored to its original state once the people leave. Their responsible and caring behaviour forces visitors to cooperate and act accordingly.

That said, the landscape gets dull after a while, as the same white scenery continues endlessly after being in a car ride for almost two hours. An acquaintance once said that on a Swiss train journey, the first few kilometres of fields and cattle prompted travellers to snap away furiously with gasps and sighs of admiration, but even that view gradually became dry. 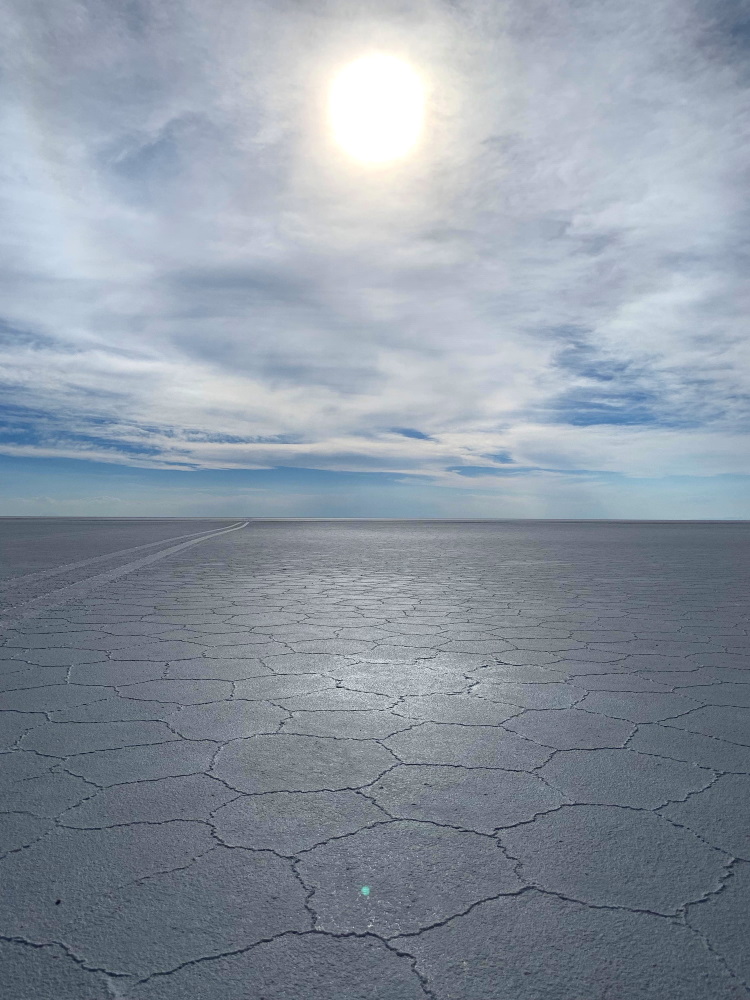 But to those outside our window, these everyday scenes of paradise are still lively and stimulating. The objects do not change; just our mindset. Though the ‘mirror of the sky’ is the biggest attraction of the salt flat, travellers can fully enjoy themselves here.

The people who depend on the lake for their livelihood are civilised, happily protecting this vast piece of nature. Between the mirror of the sky and twinkling stars, they reflect a purer truth, goodness and beauty. That’s the true identity of the Uyuni Salt Flat. 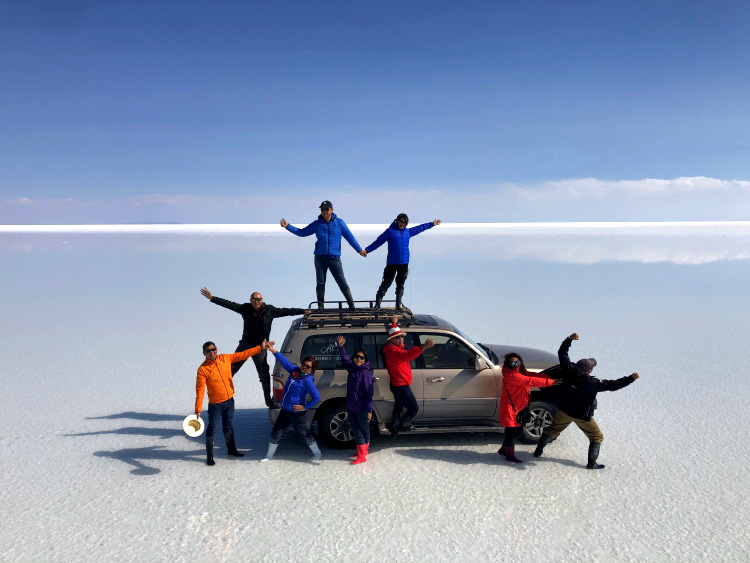 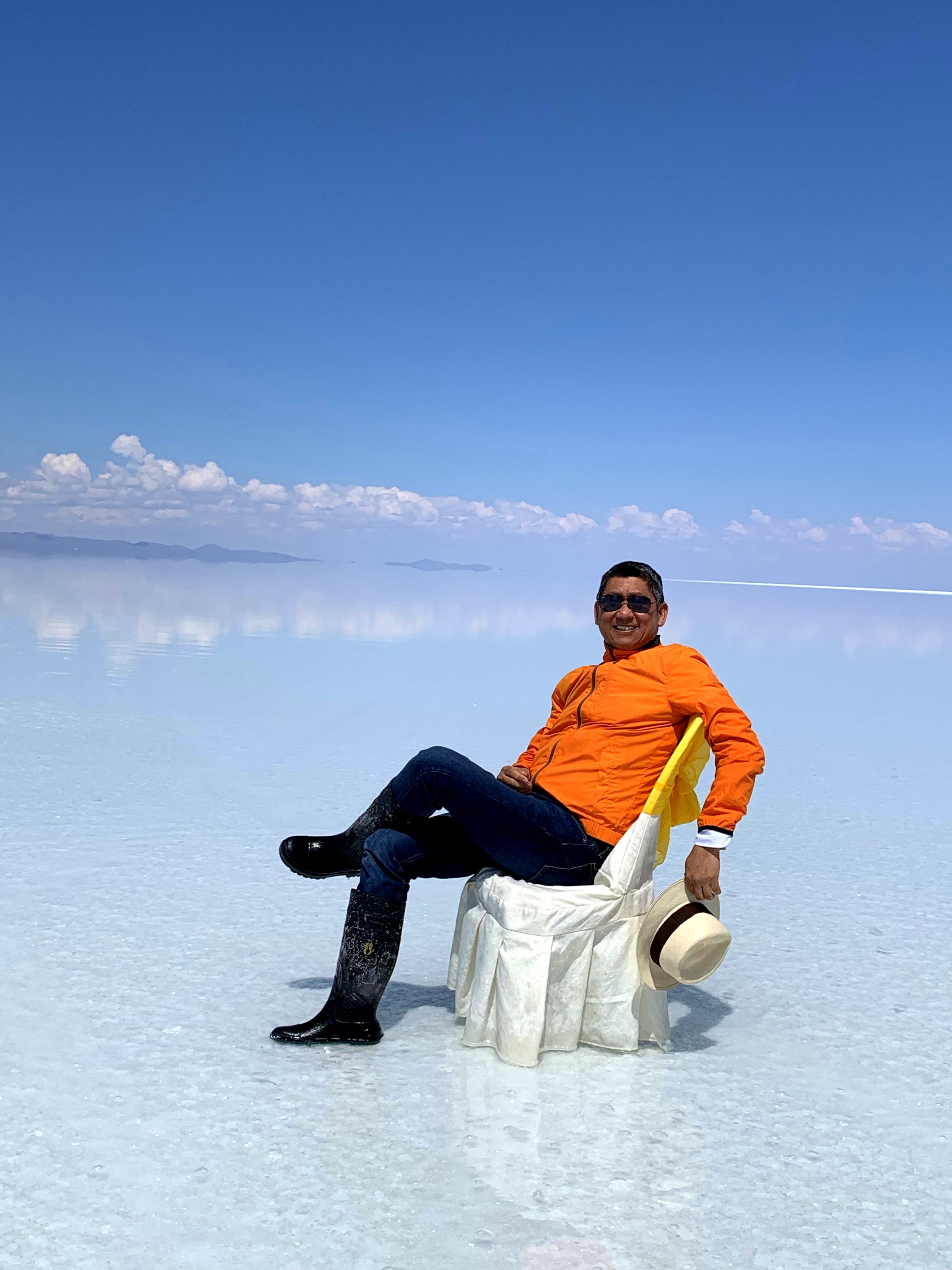 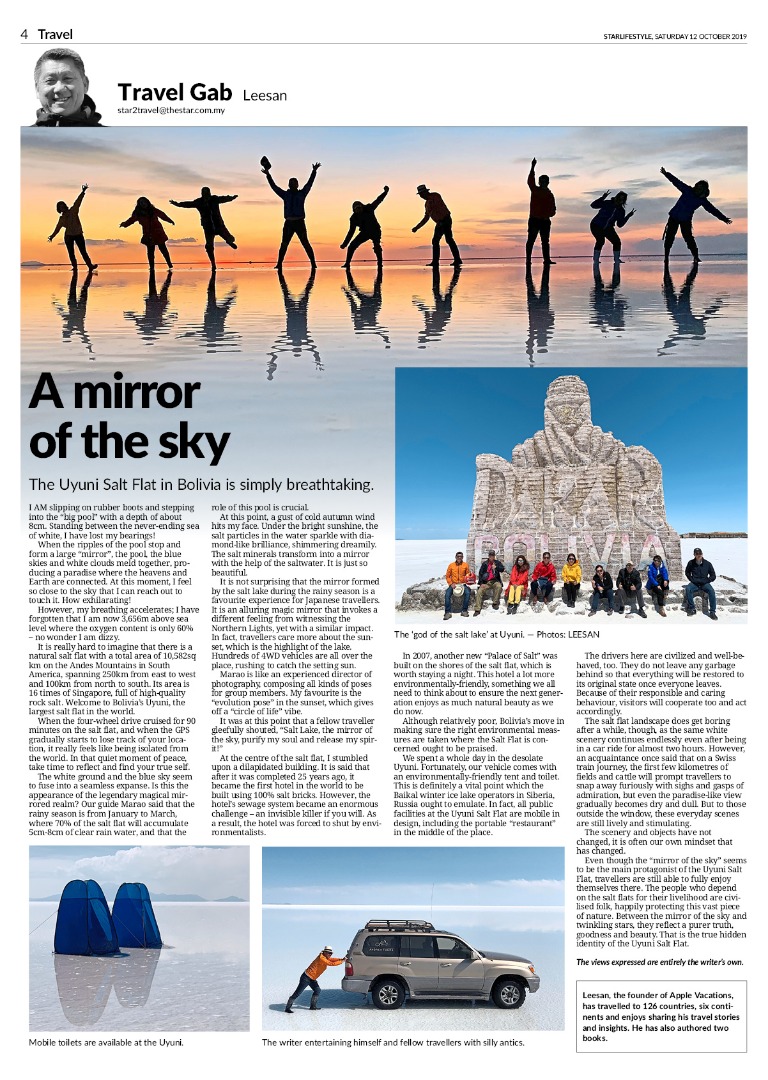