The Nazca Lines in Peru are one of the world’s unsolved archaeological mysteries.

the Nazca Lines in Peru are one of the world’s unsolved archaeological mysteries. 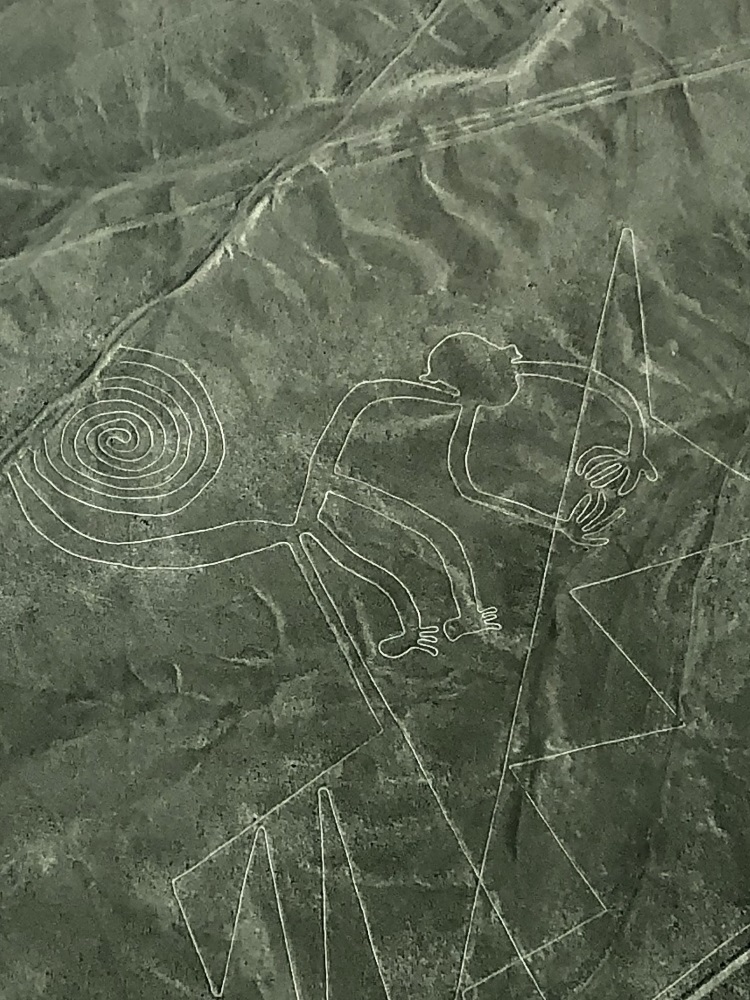 Click for bigger view:- the Nazca Lines in Peru showing shape of a monkey.

LEGEND has it that there was once an angel who loved to draw everywhere she went. One day, she flapped her wings and descended upon Earth to explore its secrets. To celebrate her visit, she left hundreds of graffiti etched on Earth’s surface.

Despite being created more than 2,000 years ago, and having gone through countless storms and other bad weather, it is rather strange that the lines and shapes left by this “angel” have not diminished. They are still clearly visible on this rocky surface, thus leaving us to wonder how they got there. I am talking about the Nazca Lines of Peru, a Unesco World Heritage Site (since 1995) that features these interesting geoglyphs.

While the story of the angel is only a myth, it nevertheless lends a mystical sense to the Nazca Lines. Who exactly made this artwork? As I waited for my team of 15 travellers to set off to the other side of South America, I pondered over the recent succesful landing of the Chinese spacecraft Chang’e 4 on the far side of the moon. I felt like we were going on our own mission to explore the unknown.

The world-famous Mayan prophecy and Inca civilisation are located on the plate where South America sits, and we are all out to explore and search for the truth behind the Nazca Lines.

Of course, Peru’s main highlight is Machu Picchu, the Inca ruins buried in the dense forest. When Spain invaded Peru some 450 years ago, they failed to locate the sacred palace hidden in the 2,500m-tall mountain. The Spanish might have heard of the ruins of the ancient city of Machu Picchu but Inca natives did not speak of it. It was not until American historian Hiram Bingham discovered it in 1911 that the whole world learned of this amazing site.

It is incredible that the ancient Nazca Lines were only discovered in the early 1900s, seeing as how they took up more than 450sq km of space. When the world finally found out about it, there were varied opinions as to who – or what – created the lines.

It was believed that the indigenous people were the first to notice the 150cm-deep canals that were between 15cm and 30cm long (these canals are what form the lines). American and German archaeologists believed that the canals were not ordinary ditches but ancient remnants from 2000 years ago. What kind of tools could the ancient people use to make such neat and consistent canals?

Besides that, the land upon which this work was done must have been selected based on sound knowledge in geology and astrology.

These discoveries left archaeologists baffled. Eventually, they noticed that the canals form graphic geoglyphs when seen from the mountains and realised the wisdom of the ancient people.

But the question remains: Who were these ancient people? Were they aliens? As for the geoglyphs themselves, these came in shapes of animals like monkeys, whales, hummingbirds, iguanas and lizards, and other abstract designs. There are more than 70 types of designs; What could they be?

I have a particular interest in exploring the remnants of ancient civilisations that do not have definite answers like the giant pyramids by the Nile river, for example. Once, I made my way down the pit of the pyramid to search for an answer and the result was…stunning! 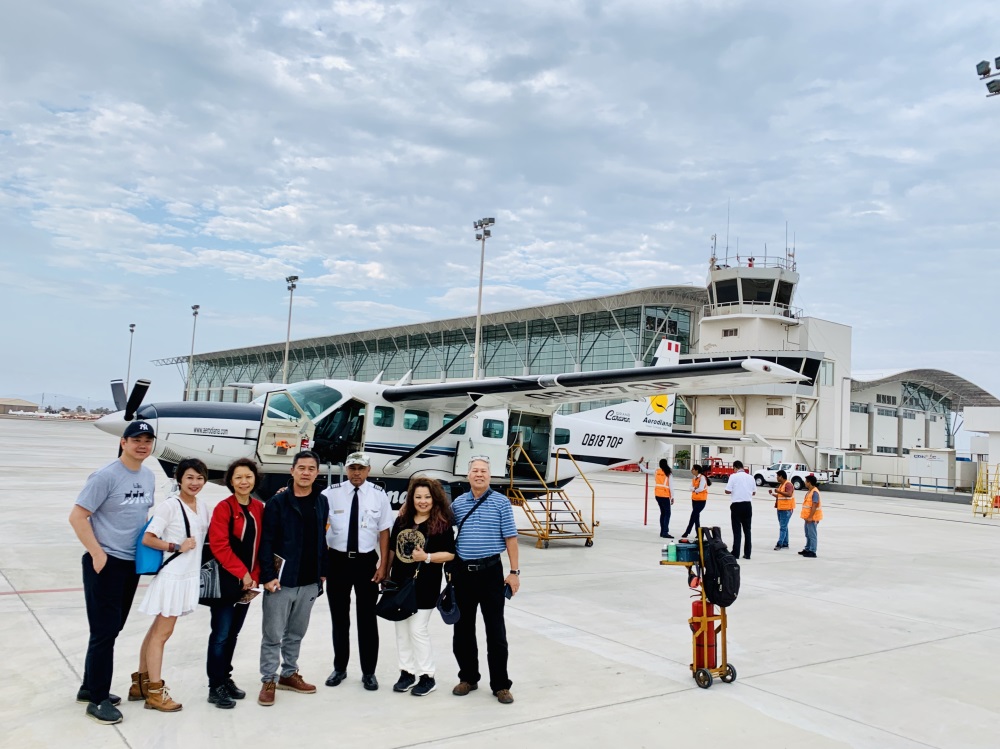 Coming back to our modern-day travellers – we have a small plane to take us around the site. It is a 12-seater aircraft with two licensed pilots and each passenger gets a window seat. This flight costs US$450 (RM1,867) per person. After half an hour of flying over the barren desert, the plane began to descend. As the plane flew lower, everyone became anxious, hardly able to contain excitement over seeing this ancient “creation of the aliens”.

The co-pilot turned around to remind us to be prepared with our cameras as the wonders of the world was about to unveil before our eyes.

In order to allow everyone to get a full view of the Nazca Lines, the pilot deliberately flew low with left turns, right turns and at a 45° tilt. But it had a terrible effect on me – I got nauseous. I felt dizzy and was not able to take more pictures.

I forced my eyes to open just so I could appreciate this sacred art. Our pilot was like an archaeologist who expertly explained to us everything we needed to know about the site. In that half-hour spin, we saw 13 of the main geoglyphs.

Click for bigger view:- the Nazca Lines in Peru showing shapes of (clockwise from top) a spider, abstract designs, a heron and a fox. — Photos: Leesan 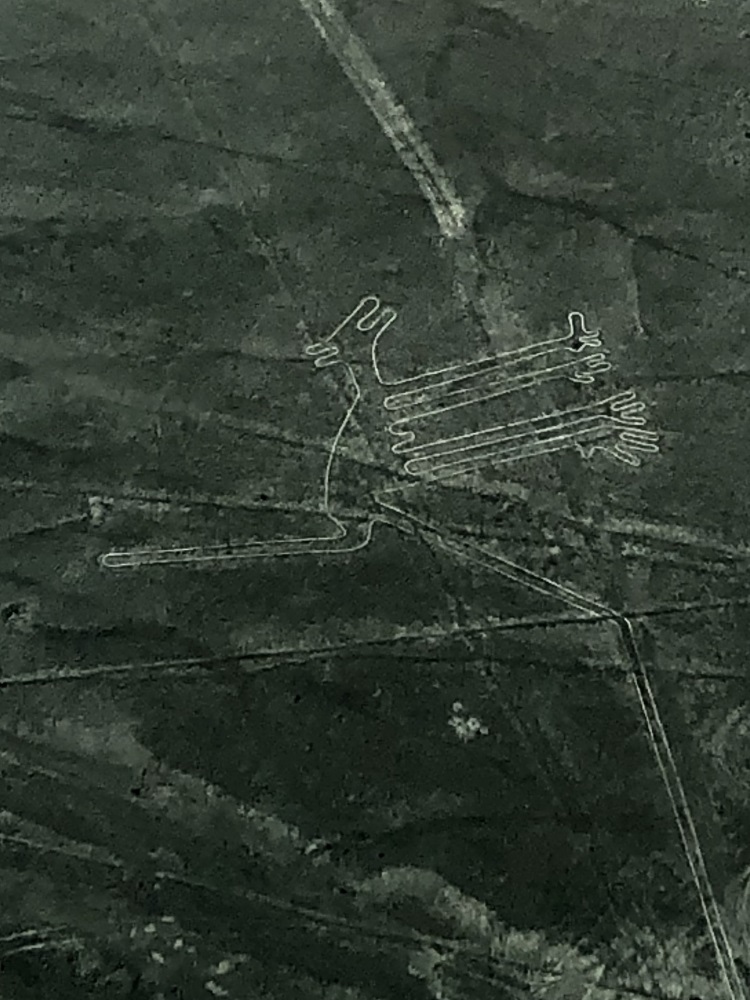 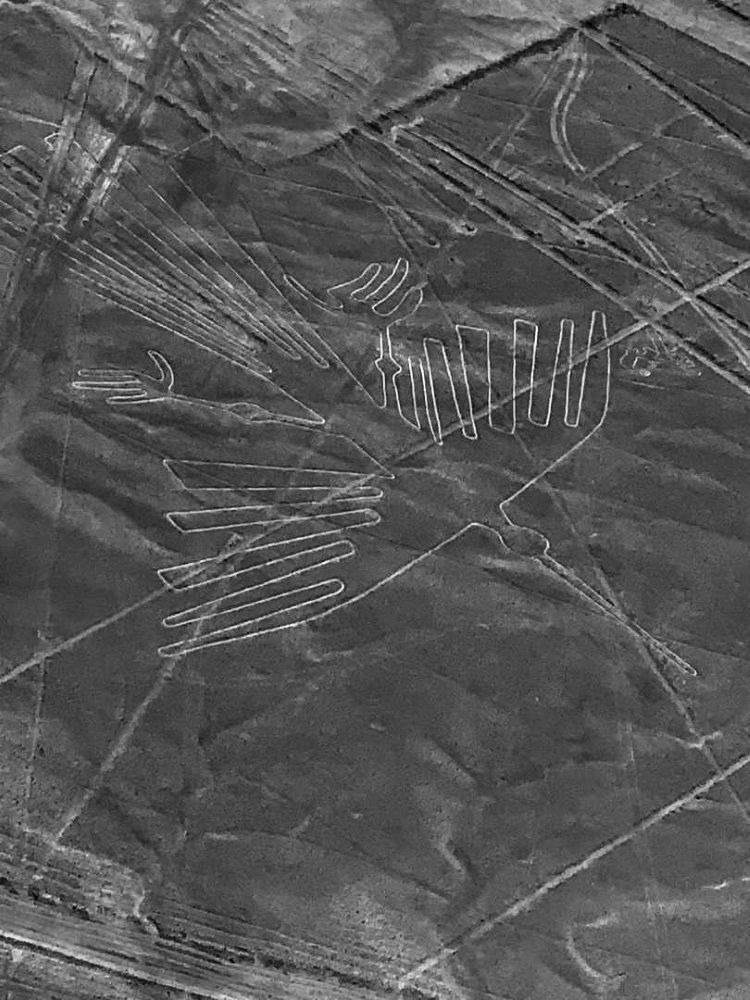 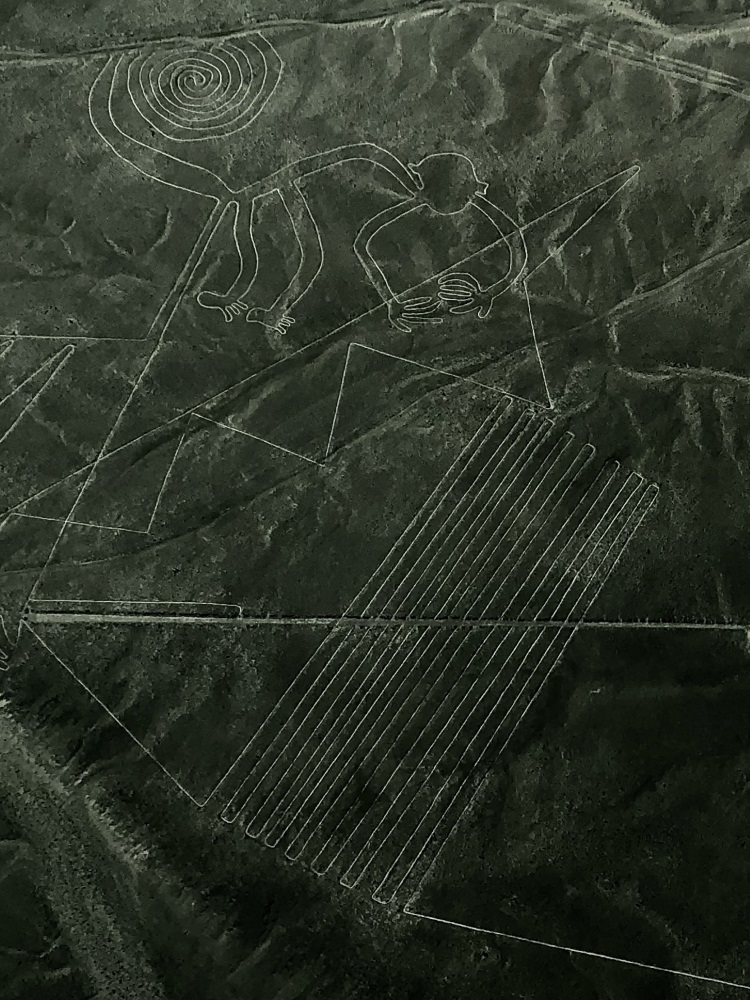 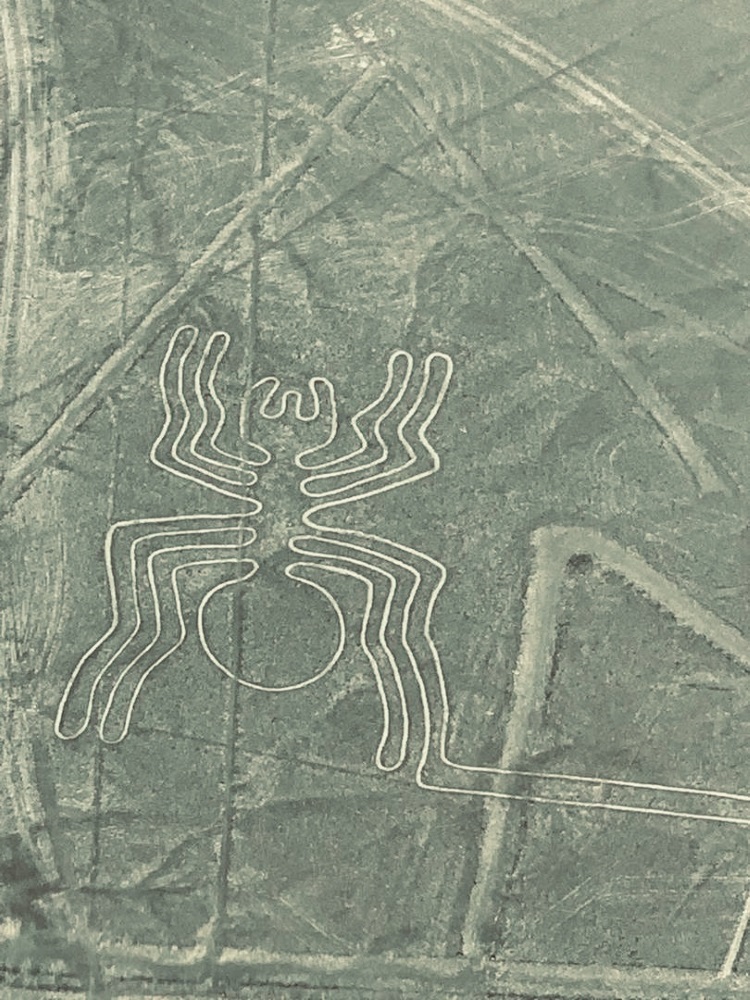 Other than the birds and animals, the circle and line patterns were also clearly seen. They were excellent works of art and I really wondered how they were made – E.T. (extra-terrestrial)? Or could these be the way the Incas and their gods communicated?

Apparently, the most probable explanation is that these geoglyphs were done by the ancient Nazca people in the Andes when they prayed to the Gods asking for rain.

It is undeniable that the ancient people were gifted and wise. In a region where the climate is dry with hardly any wind or rain throughout the year, not a tuft of grass could be seen on the ground but rather, a piece of history. It is this dry climate that helped to preserve the patterns, and it seemed like the ancient folks were aware of this.

We flew for another half an hour before we touched down. Everyone was still talking about the lines by the time we left the place. We wondered why the ancient people would devote so much of their human resources to create such huge patterns.

We concluded unanimously that the Nazca Lines must have been the graffiti of the angels from outer space! 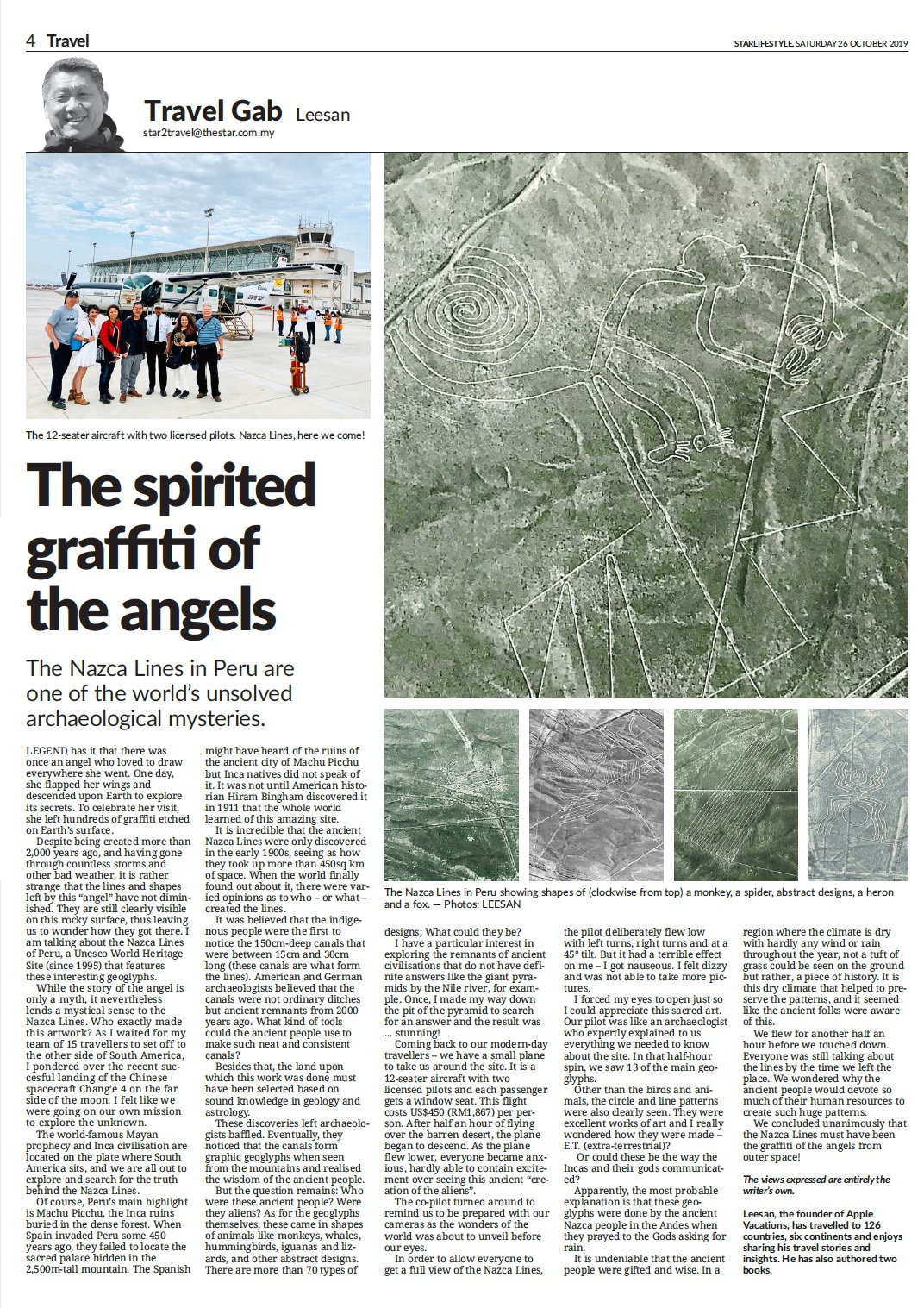