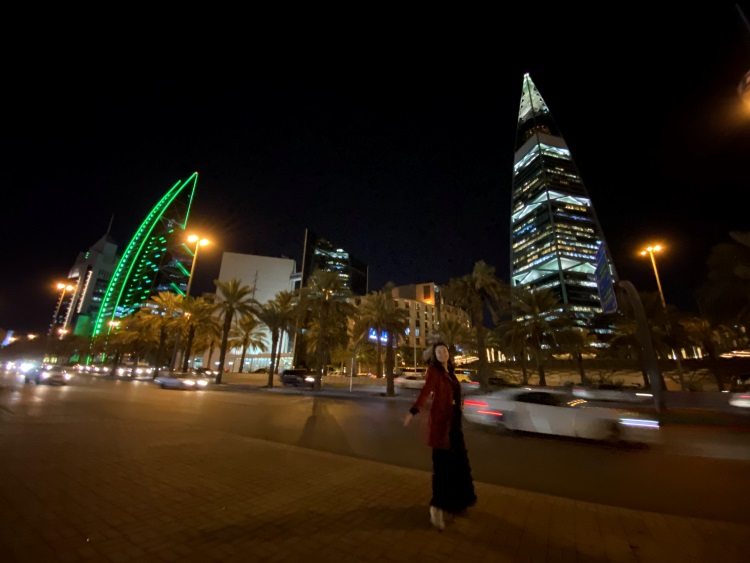 Riyadh at night is just as beautiful as in the day time.

Many would probably know of the super wealthy King Salman Abdulaziz of Saudi Arabia and his fondness for all things grand. When he travels, he reportedly brings along some 1,500 people – of which 150 are said to be chefs – along with him on a chartered flight.

There are also two golden toilets on the plane… 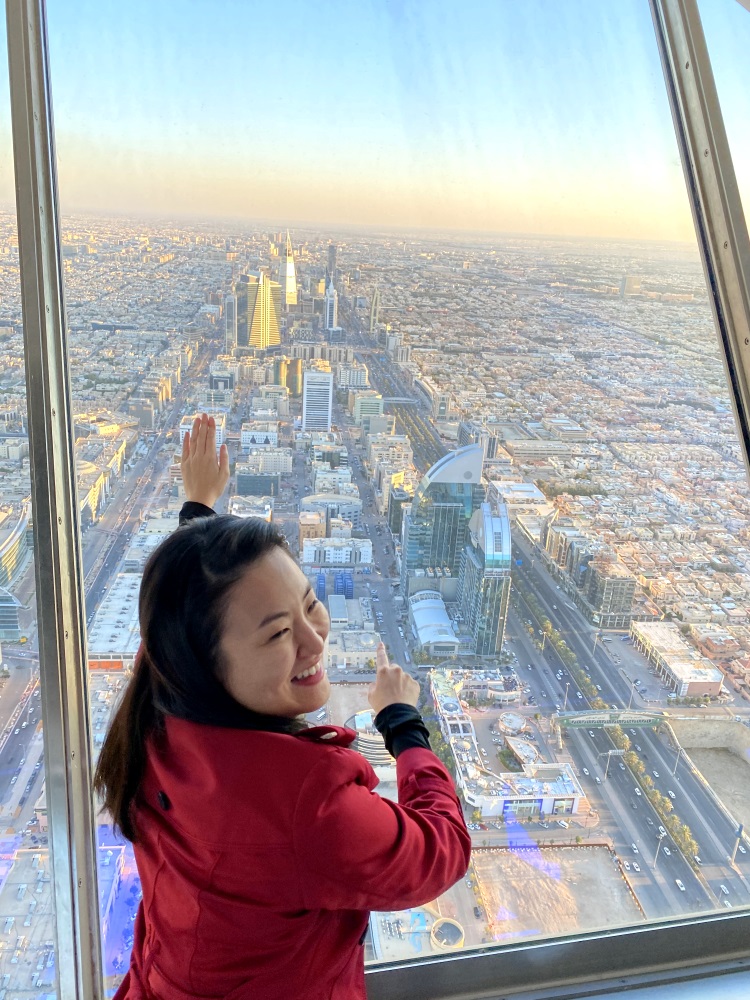 Looking down at the city of Riyadh from the Kingdom Centre Tower. 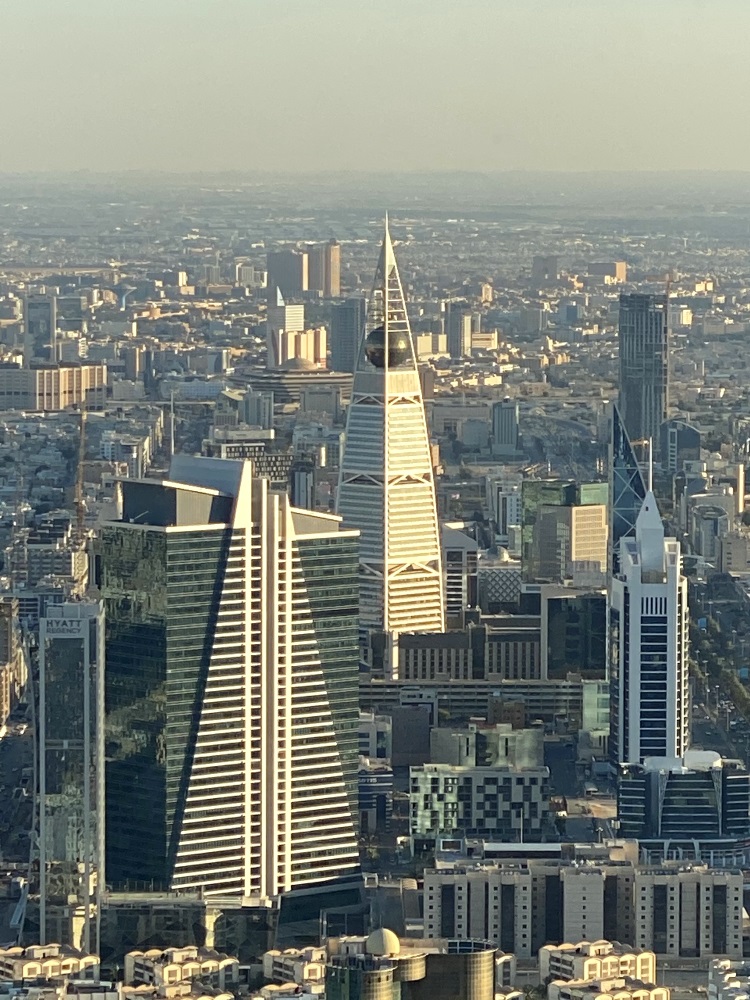 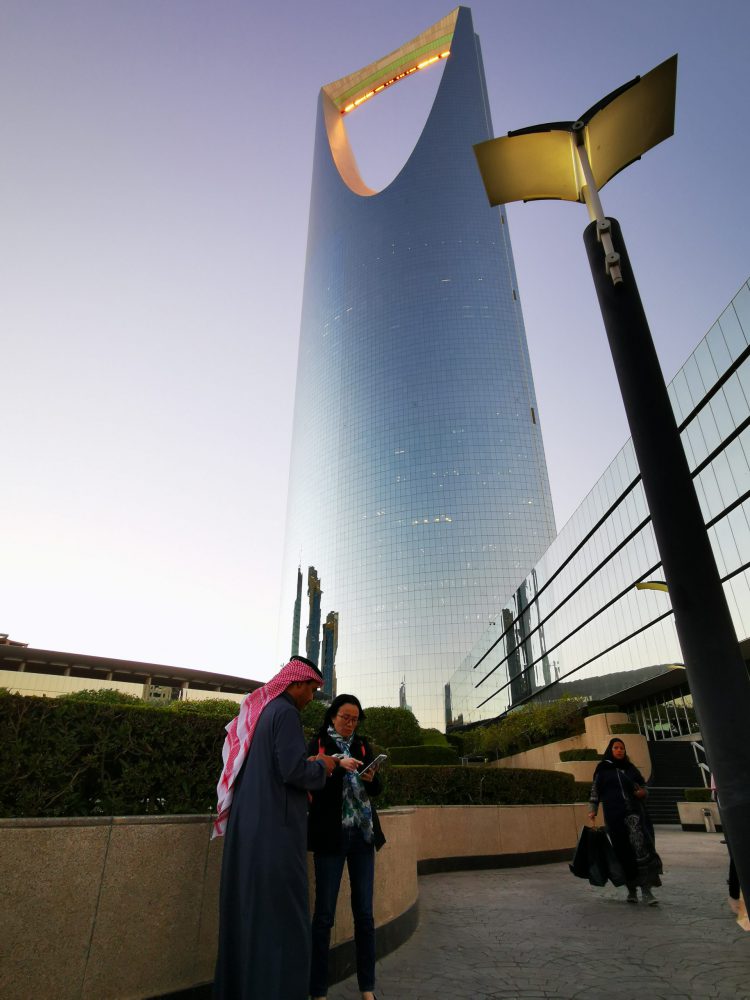 When the entourage arrives at their destination, hundreds of new Mercedes Benz cars would be waiting for the “super-golden VIPs”. There are many other tales and reports that you can find with regards to King Salman, and almost all are just as unbelievable.

Saudi Arabia is the biggest oil-producing country around, dominating the lifeline of the world’s energy, so it is not surprising that the kingdom’s royals live a life of mega luxury.

I’m quite curious to know more about this swanky country’s infrastructure, as well as social structures.
Unfortunately, it has been difficult to visit Saudi Arabia as the country never used to issue tourist visas, unless if it was for pilgrimage or work purposes.

One of my alter egos, Ah Choo, seems to think that, “If I can marry a Saudi, I won’t have to worry about the other half of my life!” Meanwhile, my other alter ego, Ah Beng, wonders if the fully veiled Saudi women are “beautiful like goddesses, liberal and self-composed”.

I have also heard of stories about homes in Saudi Arabia – apparently, there are two taps in the front lawn: a water tap and an oil tap!

Mysterious things like these often make people even more curious, and I am one of them. I mean, at least allow me to verify whether the oil well in Saudi Arabia is like a banknote printer that can print money at any time… 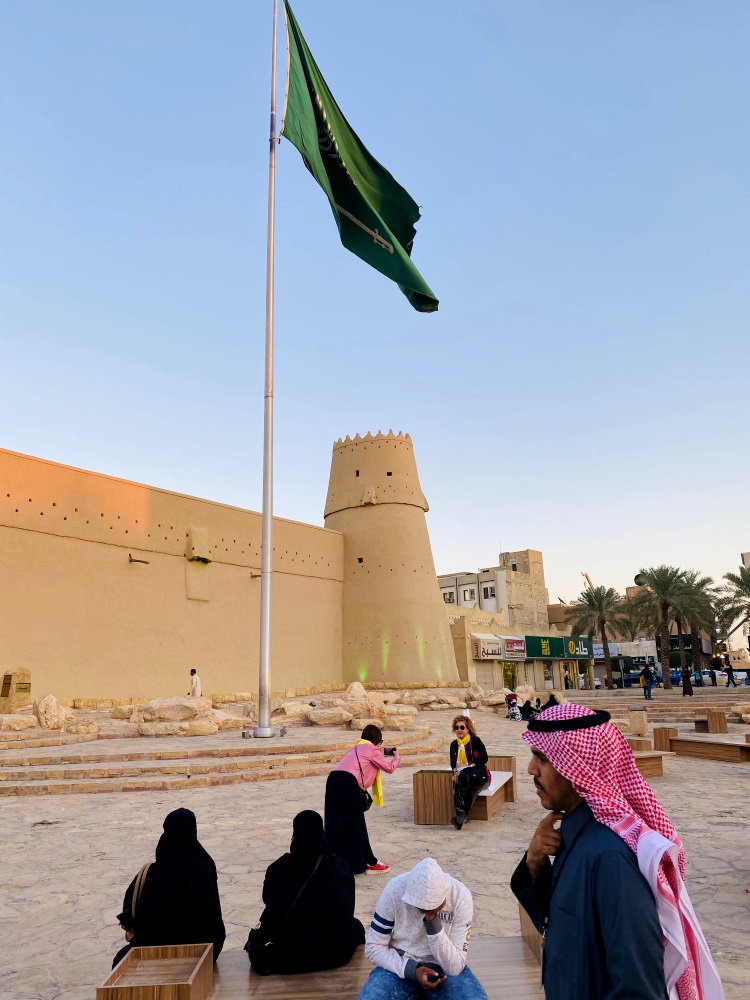 Saudi Arabia does not make it mandatory for female tourists to wear headscarves in public.

I would also like to know how the 3.4 million Saudis live every day. Are their lives just as lavish? Are there no poor people in the country? Does everyone stay in Western-style houses and drive luxury cars? Do Saudi men really cherish their women? Why are women not allowed to drive or be alone with the opposite sex? Women and men have to buy things at separate counters, including at McDonald’s. It makes me wonder if they sit separately in movie theatres too.

With all these questions brewing in my mind, I was determined to visit Saudi Arabia.

I finally got my chance to do so in October last year, when the desert nation unexpectedly started offering tourist visas. When I heard the news, I decided that I was going to bring a tour group through the mysterious veil. My tour group members were doubtful at first, with some of the women saying, “I’d better take my marriage certificate with me, lest the hotel forbids me to share a room with my husband!”

I replied half-jokingly, “If that is so, then that’s what a traveller wants to experience!” The Saudis queing up for fried chicken 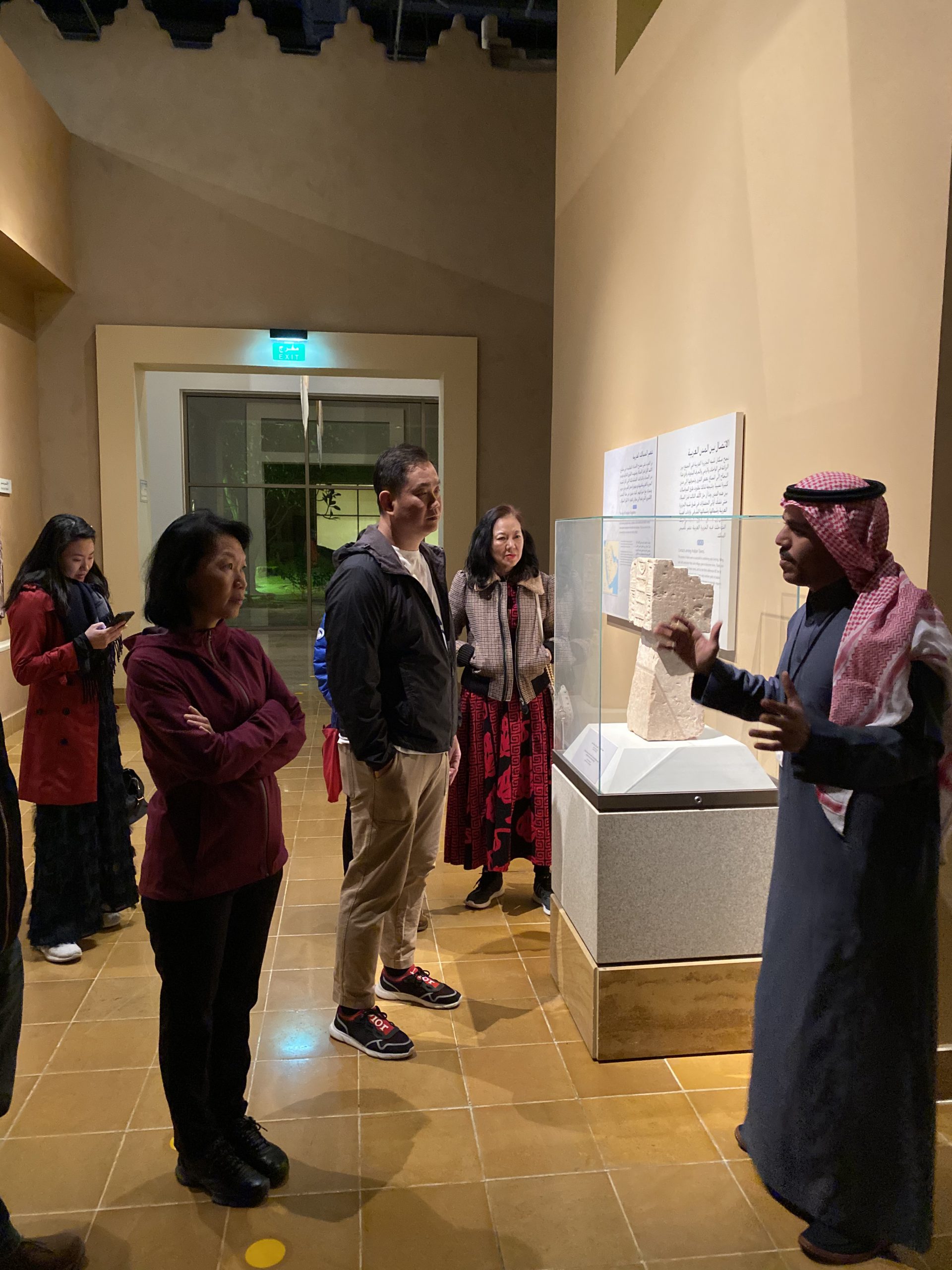 One thing that’s also impressive about Saudi Arabia is its 34-year-old crown prince Mohammad Salman’s (MBS) imposing power. He has vigorously eliminated any oppositions and fought against corruption and tax evasion of royal family and relatives, thus obtaining unprecedented support. What the younger generation love most about him is his act of listing the national oil company to create the world’s largest IPO and building a smart city.

Saudi women are also happy as they are now allowed to drive and no longer need to queue up separately in shops. Even wearing a headscarf is now autonomous. Could it be that the world’s largest Sunni theocratic state, originally closed-minded and incredibly conservative, finally wants to separate politics from religion? Or is it a countermeasure to prevent the largest Shiite state, Iran, from monopolising relations with the United States?

I think that Saudi Arabia is sincere in opening up their doors to the world by issuing tourist visas. Our group of 17 people received the first batch of visas and we arrived in the vast kingdom (with a land area of 2.15 million sq km) safely. The sluggish hotel receptionist was apologetic and said, “You are our hotel’s first batch of tourists, we have to carefully process all your passports and visas.”

We were not in a hurry so we just replied her beautiful smile with a nod.

When we landed at the airport of the pilgrimage land, Jeddah, the female customs officer that we met was wearing a burqa but we could clearly hear her greeting us in fluent English.

However, the Jeddah Airport itself was a big mess. It’s puzzling to see how an airport that receives an average of 15 million pilgrims every year fares miserably in comparison to its wealth. Even the current Cairo airport in Egypt has been beautifully transformed. (As a side note, Jordan has the best and most elegant airport in all of the Middle East.) 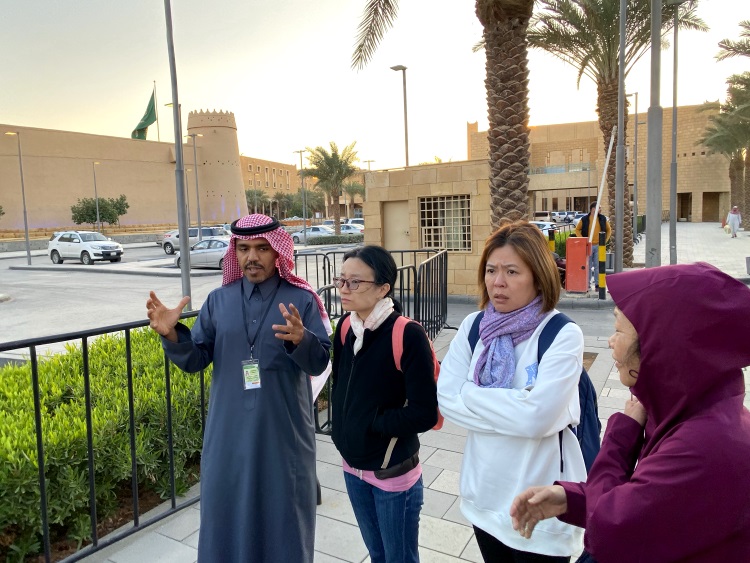 Our Riyadh guide Abdullah (left) had hoped that we could adapt to the local customs. — Photos: LEESAN

It is clear that Saudi Arabia is very new to the tourism game. The tourists bus that picked us up from the airport looks no different from a normal long-haul bus. The microphone was faulty, the air-conditioning was not working properly and the driver did not know many tourist spots. As for our guide in Jeddah, he could not understand why our group looked Chinese yet we called ourselves Malaysians! He also kept asking us what we would like to see and eat, and what we wanted to know.

Also, the bus kept arriving late, the guide was unprofessional, the meals were unbalanced (although I must say that Middle Eastern cuisine is delicious) and the attraction selections were poor. All these are basic things in a tour and they seriously need to improve.

Fortunately, Jeddah itself is worth checking out. The city on the Red Sea is prosperous with many docks, shops and huge shopping centres.

We also saw women driving cars on the roads; what a sight!

In Riyadh, the nation’s capital with four million people, we went up the Kingdom Centre Tower, which was 99 storeys high. We got a bird’s eye view of the entire stone-and-mud city built in the Arabian style. Unexpectedly, the entire city forms a grid on the flat desert, looking systematic and orderly. There was heavy traffic on some of the spacious main roads that seem to stretch for hundreds of kilometres.

On both sides of the roads there are hundreds of buildings with novel designs. The upcoming G20 summit will be held in this city, therefore the capital is also rushing to build subway and light rail systems. It seems that all infrastructure developments are coming together here, metropolitan style.

We saw some women seeking alms from passers-by and asked our guide about it. He explained that they were refugees from neighbouring countries. It is not known how many refugees there are in the kingdom but it does potentially bring serious social issues.

There are also a large number of foreign workers there, which was understandable as Saudi Arabia does require many labourers to work on all the upcoming developments.

We asked if all Arabs were rich. Our guide smirked and said: “Apart from free education and healthcare, our petrol is not cheaper here than in Malaysia. The cost of goods is very high and we have to pay sales taxes. So what do you think the answer to your question is?

“We do believe that the crown prince will be able to transform and enhance our current appearance and economy, advance with the times and be on par with international standards. So, give us some time to expand and improve our tourism industry.” The views expressed are entirely the writer’s own.

Leesan, the founder of Apple Vacations, has travelled to 131 countries, six continents and enjoys sharing his travel stories and insights. He has also authored two books. 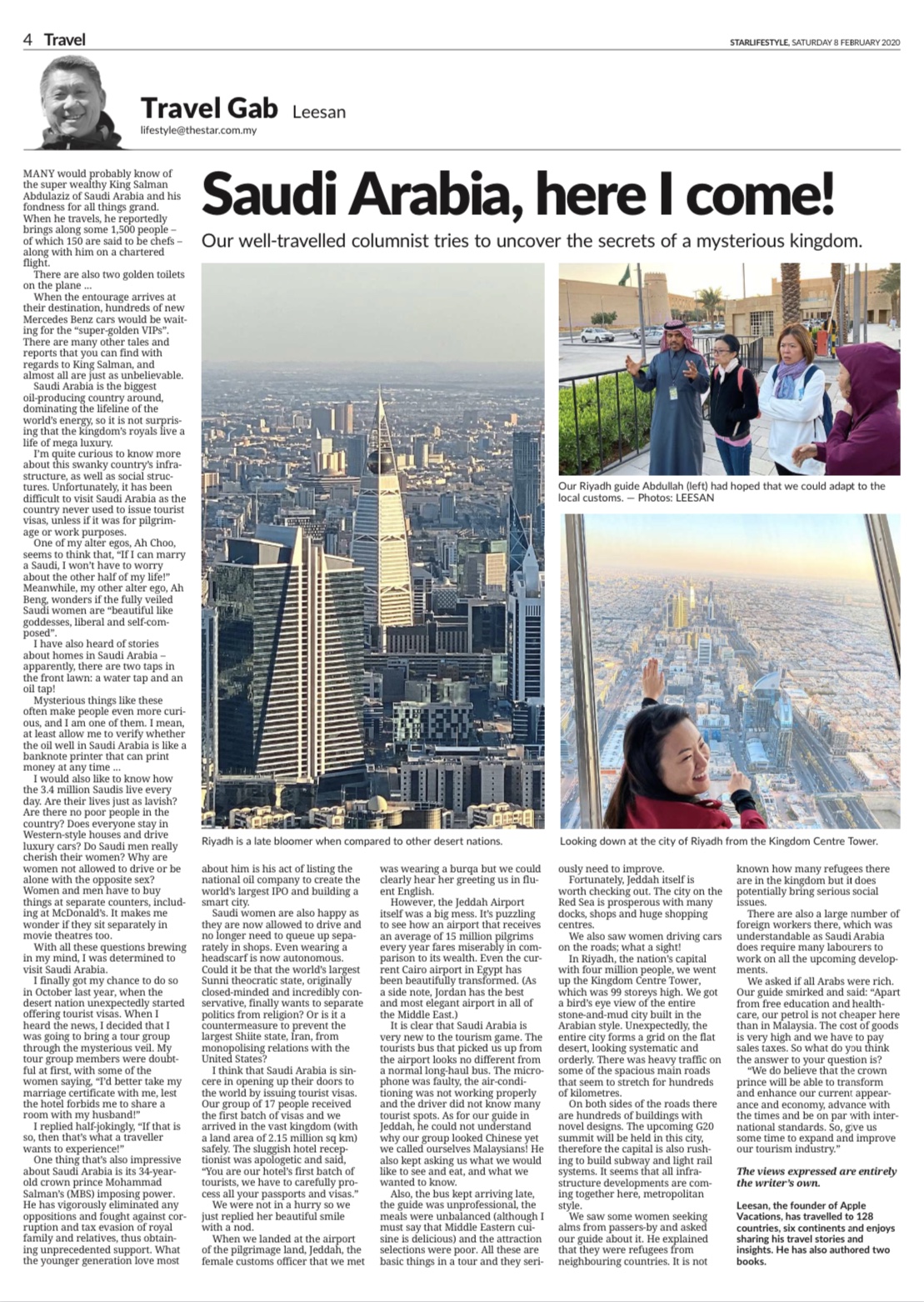