Call of the Kinabatangan — by Leesan

Six in the morning, the group members were already aboard the boats cruising swiftly along the Kinabatangan River in Sandakan to explore the many secrets the area has to offer.

Call of the Kinabatangan
— by Leesan

A cruise along this pristine river in Sabah unveils many natural treasures for our columnist.

It’s 6am and we are all already sitting in the long boats, cruising swiftly along the Kinabatangan River in Sandakan, Sabah to explore the many secrets the area has to offer. By then, the roaring noise of the motor has completely woken us up.

We could see rare hornbills and small groups of egrets spreading their wings and taking flight in the morning sky.

Despite the swift river current due to ample rainfall, we could still see bubbles on the water surface, probably from the fishes and shrimps excited about our visit.

Normally during this travel season, most of us would have ventured abroad. But such a marvellous natural landscape right here in Malaysia is something quite captivating. 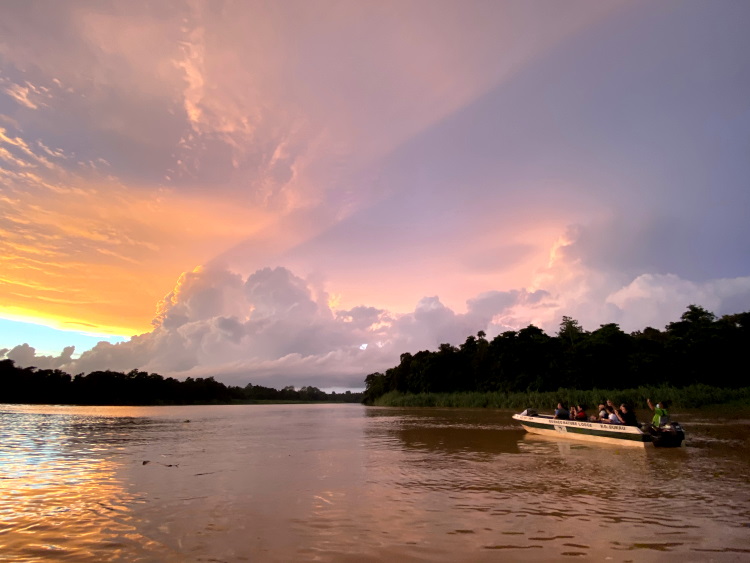 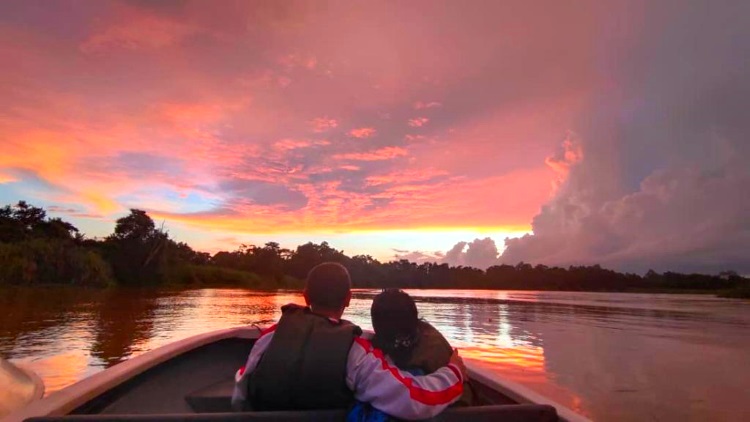 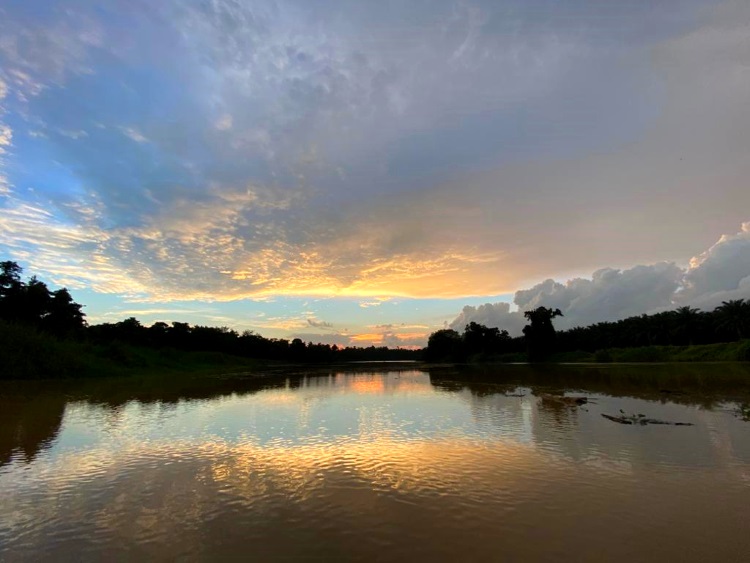 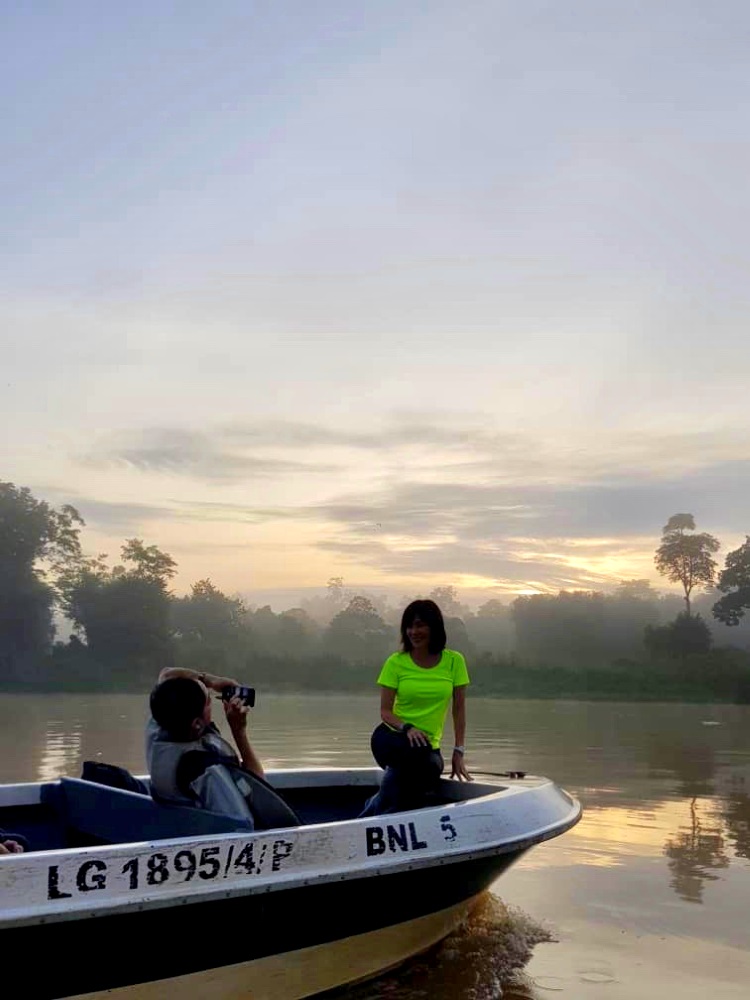 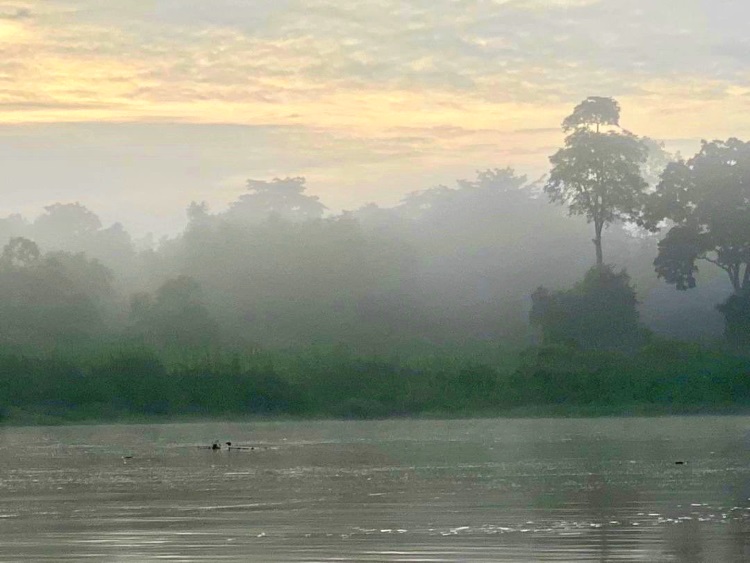 It’s hard to imagine that an Amazon-like forest exists within our own shores. I couldn’t help but yell out loudly to the great river and the thick forest before me: Kinabatangan, I’m here to see you!

Oh no, it appears the sleeping crocodile has been rudely awakened by me, lazily lifting his eyelids and slowly opening his massive mouth as if to greet us “Mahinahat” (good morning in the indigenous Suluk dialect).

We are in the Sukau area downstream of Kinabatangan, with thick forests and shrubs as well as wet plains criss-crossed by dense tributaries.

It’s also where the highest concentration of wildlife habitats in the whole country is found.

Our boats cruised along the tributaries among the mangroves as we went on to explore the mysteries of the rainforest and inspect the many curious life forms here.

Our eco guide told us the early bird catches the worm, so wild animals and birds start their day early in the morning, speeding their way in all directions and at times swooping down on a doomed prey. This is where only the fittest will survive. This is where only the fittest will survive.

“These are the footprints and fresh dung of Borneo pygmy elephants. It looks like we have good chance of meeting a couple of them today, ” our guide explained as the boat got closer to the riverbank.

As if on cue, a young tour member suddenly pointed in excitement to some rustling across the distance. It appears a wild animal is in the vicinity.

Borneo is home to eight different species of primates dwelling in the massive swathe of million years old mangrove forests here. We were lucky to have a close look at some of them in Sabah.

The most common among the primates here are the adorable long-tailed macaques and the coconut-plucking apes. We also chanced upon the extremely rare silver leaf monkeys and even a couple of wild orangutans.

It is interesting to note that although apes are 96.4% identical to humans genetically, they don’t swim like us. 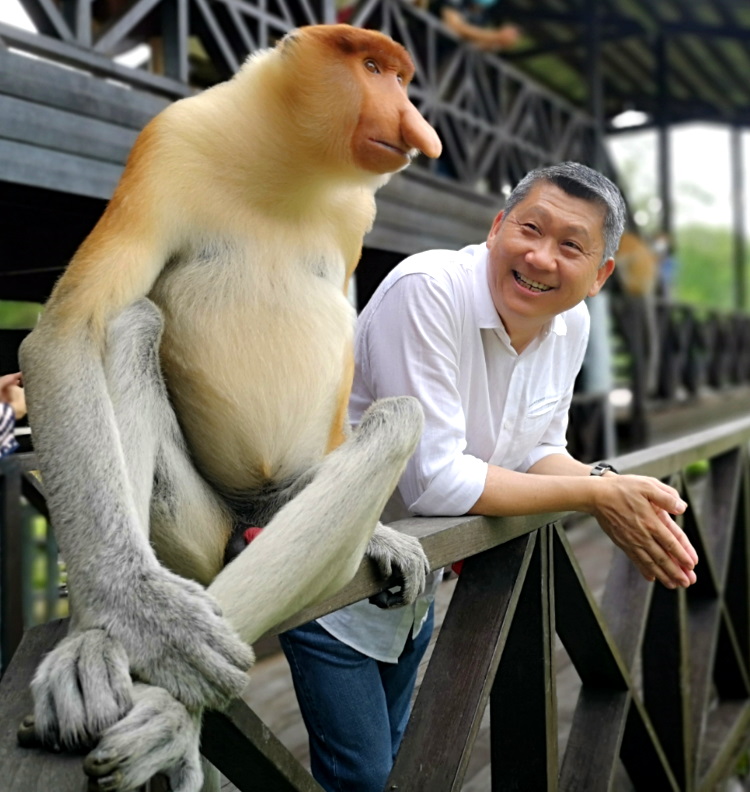 Leesan made some new friends, like the proboscis monkey, in Sandakan.

What really shocked me, however, was that the entire forest was filled with the long-nosed proboscis monkeys which most of us had never seen before.

Did you know these proboscis monkeys live among the mangroves and sleep by hugging tree trunks?

They are “vegetarians” in nature, feeding on tree leaves and fruits, and they don’t like sweet stuff. Interestingly, these monkeys have two stomachs for food regurgitation, and therefore have huge bellies.

They have a digestive system similar to that of a cow, swallowing the food and sending it to the second stomach first, then regurgitating it when they get hungry later, before redirecting the chewed food to the first stomach.

Their long noses are symbols of virility. They also have very long tails and protruding bellies.

As I have said before, you need to venture into the jungle to learn about the ecosystem. 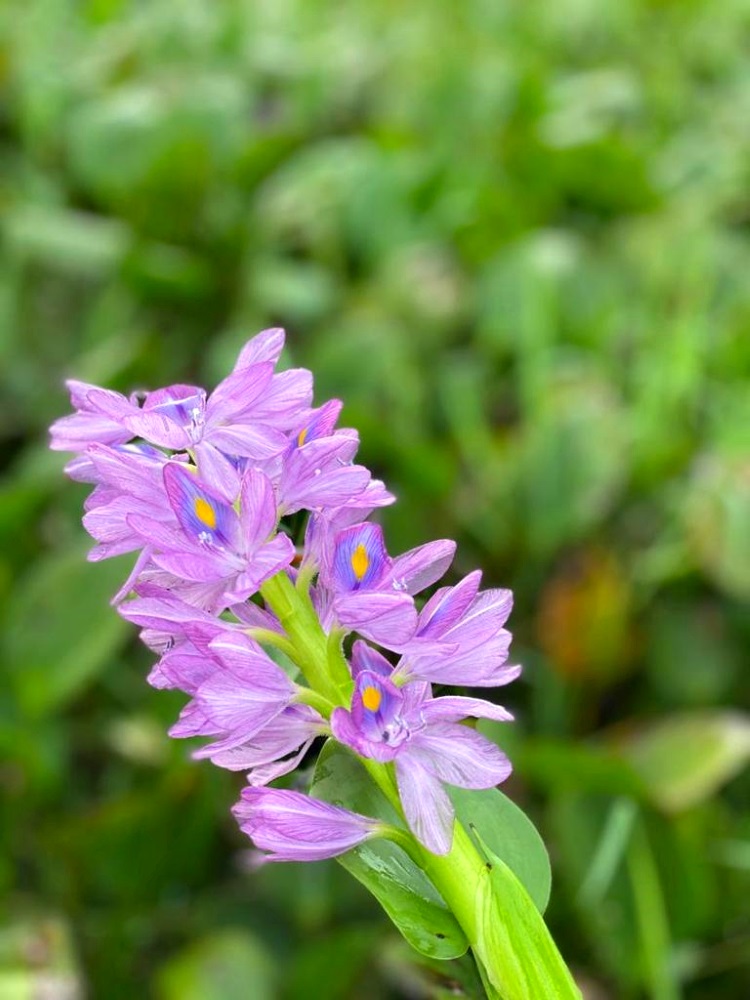 “Proboscis monkeys practise polygamy and a male monkey may have plenty of ‘wives’. They have to be constantly alert of opponents trying to entice their female partners, ” our guide explained.

These monkeys normally live in families of 10 to 20. Although they mostly live in peaceful coexistence, the males do not tolerate their mates bearing other monkeys’ children.

Like the African lions, they only want their own children and will get rid of those not from their bloodline.

The infants are raised exclusively by the mother and when they become independent at the age of two, they will leave their homes and live with other single monkeys.

Between 4pm and 6pm each evening, these monkeys will start gathering in the shrubs along the riverbank to look for food or play among themselves. Sure enough all this fell into our close vision. I would like to point out that the International Union for Conservation of Nature has put proboscis monkeys in the red endangered animal list.

To be honest, I came to Kinabatangan to see orangutans but these proboscis monkeys have become the unexpected stars in our jungle adventure.

The 560km-long Kinabatangan River, the longest in Sabah and second longest in the country, has its headwaters in the mountains in the Sabah interiors, coursing eastwards before emptying into the Sulu Sea. Our tour group to Sabah was the first to arrive since the pandemic, said chairman of the Sabah Tourism Board Mr. Ken Pan(left) and Matta president Datuk Tan Kok Liang (right) when welcoming us in Sandakan.

The most common catch here is the juicy ikan patin and succulent river lobster. To the indigenous Orang Sungai living along the river, these fishes and prawns are their major source of income.

The downriver lowlands are nevertheless marshy and unsuited for farming. The good news is, the virgin forest here is home to many wild animals.

But sadly, much of the virgin forest here has been cut down and planted with oil palm which carries very attractive commercial values.

As a result, the wild animals here such as the Bornean sun bears, orangutans and proboscis monkeys have been made homeless.

It is a matter of time before humans suffer the consequences of our heartless destruction of the virgin forests and vulnerable ecosystem.

That said, we came across so many colourful things and people during this highly eco-educational Kinabatangan River trip. 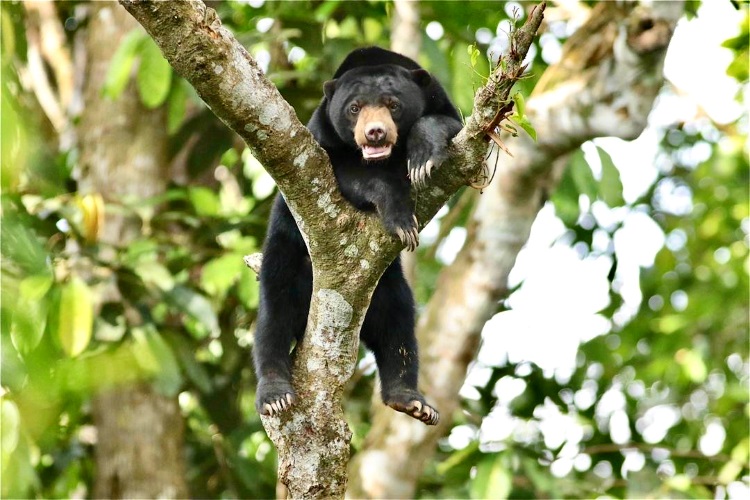 Part of the first tour group from Peninsular Malaysia to visit Sandakan during the recovery movement control order period. River lobster for dinner, anyone? Or some fresh Patin? 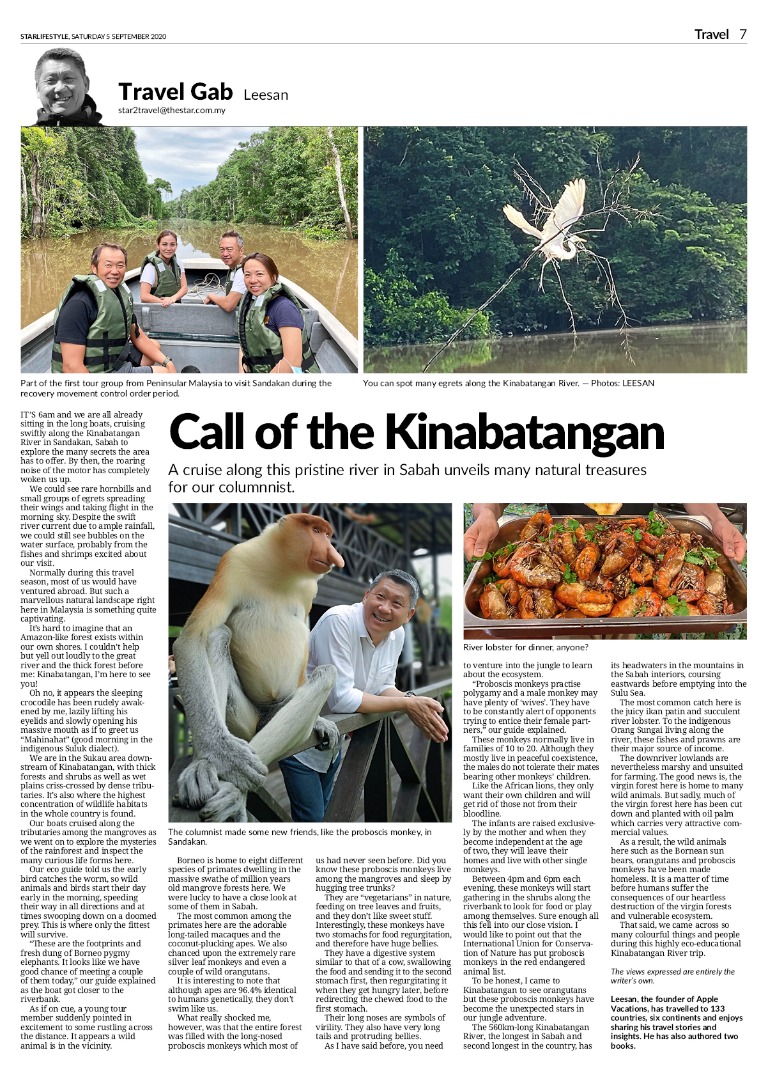