On the fifth floor of the company is the major entrance foyer for guests designed to look like a Japanese art house. Even our visiting Japanese guests marvel at it.

In business, if you want to succeed and stay resilient during hard times, adopt the Japanese fighting spirit.
ON the fifth floor of our company is the main foyer for guests that’s designed to look like a Japanese art house. Even our visiting Japanese guests marvel at it.

At the entrance, there hangs an eye-catching plaque with four Japanese Kanji characters that read “isshōkenmei”, or “giving my best shot”. That was a gift designed specifically by a close friend of mine, Nakagawa-san, the owner of an onsen resort in Japan’s Mie prefecture. He insisted that the four words embody the craftsmanship spirit of never giving up.

In 2014, when the company was relocated here, Nakagawa-san flew all the way from Kansai to hang the plaque up for me. 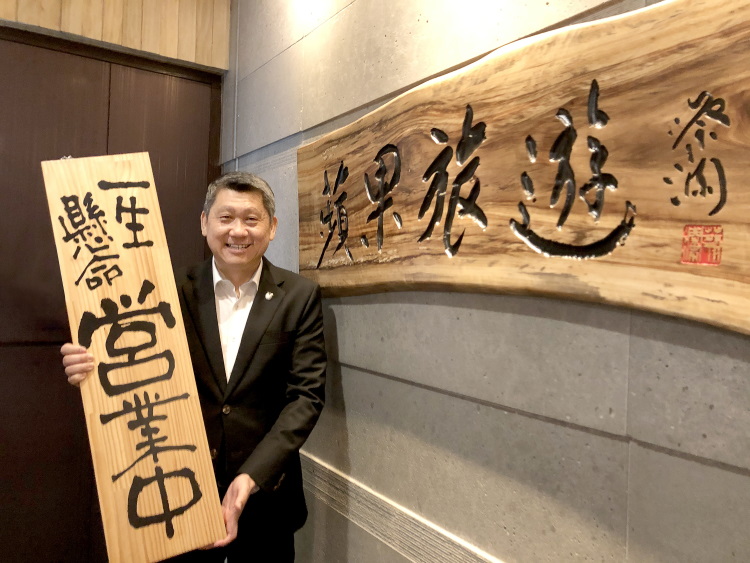 The writer standing next to the “isshokenmei” plaque in his office, and carrying another one with a different phrase.

Isshōkenmei means insistence on working hard and doing one’s best to achieve a meaningful and fulfilling life. I feel that these four words so aptly describe the experiences I have gone through all these years: I give my best persistently and I never give up, even when it seems like there is not much hope.

This is only a minor episode in my decades-long career, but each time we have a visitor, my staff will tirelessly explain how this plaque came to be. Sometimes people ask, “How did this get here?”, and I would tell them about my days of studying and living in Japan. Our guests are usually fascinated by the tales I tell them, and it gives them the impression that my company is a Japan tour specialist.

Each time I step into the office, I take a look at the plaque, murmuring “isshōkenmei” as if to remind myself (and my staff) that we must work doubly hard ever day, rain or shine.

I have to say that almost everything about my career is in one way or another linked to the Japanese spirit of “benkyō Nihon” (benkyō means to study or learn, while Nihon means Japan).
As a matter of fact, it is the life I went through in Japan that has progressively nourished my growth, helping me gain full comprehension of the what it means to be Japanese.

I went to Japan to study in 1991, and spent five years there. At the time the exchange rate was 100 yen to RM2.70-RM2.90 (it’s now RM3.90, a 37% appreciation). That was also the golden era of the Japanese economy. They were attracting a lot of foreign students to study and pay tuition fees in Japan, which helped to expand the country’s education sector.

At the same time, the Japanese people became growingly reluctant to take up the so-called “5K” (dirty, dangerous, farming, low-pay and monotonous) jobs. Instead, there were many labourers from Malaysia, Thailand or Indonesia at construction sites, ryokan logistics and farms.

Earning my school fees
As I had a student pass, I could work legally for up to 20 hours each week, and be paid 700 yen an hour to earn some pocket money. I delivered newspapers at daybreak, and then attended school during the day. In the evening, I was a part-time dishwasher at a local Chinese restaurant. Additionally, I also did a few odd jobs at a milk factory, and was a kitchen helper, too.

I did almost everything I could do!

During the summer vacations, I would follow the garbage trucks to collect trash and learn about waste classification. I also became a tour guide, and an interpreter. In short, I did my very best to raise the almost RM40,000 annual tuition fees by working in Japan.

Fortunately, the people I came across in each of these jobs gave me some refreshing and uplifting social learning opportunities. I came to realise why the Japanese could pick themselves up and boost their morale so quickly after the country’s defeat in the World War II.

Nothing came by chance, and I think their “weapons” must have been their positive attitude, unyielding spirit, attention to detail, and accountability.

My teacher Prof Kuribayashi told me that Japanese people are very good at learning, copying and modifying Western know-how and ideas. This has somewhat created a Japanese work attitude fairly similar to that of the West, particularly in Europe.

At the same time, this also fine-tuned the unique Japanese spirit of staying focused, being serious, always “fighting”, and persevering.

We have to emulate the Japanese people’s dedicated workplace attitude as well as their courage in admitting their mistakes.

Such attributes should be ingrained into our corporate management culture. 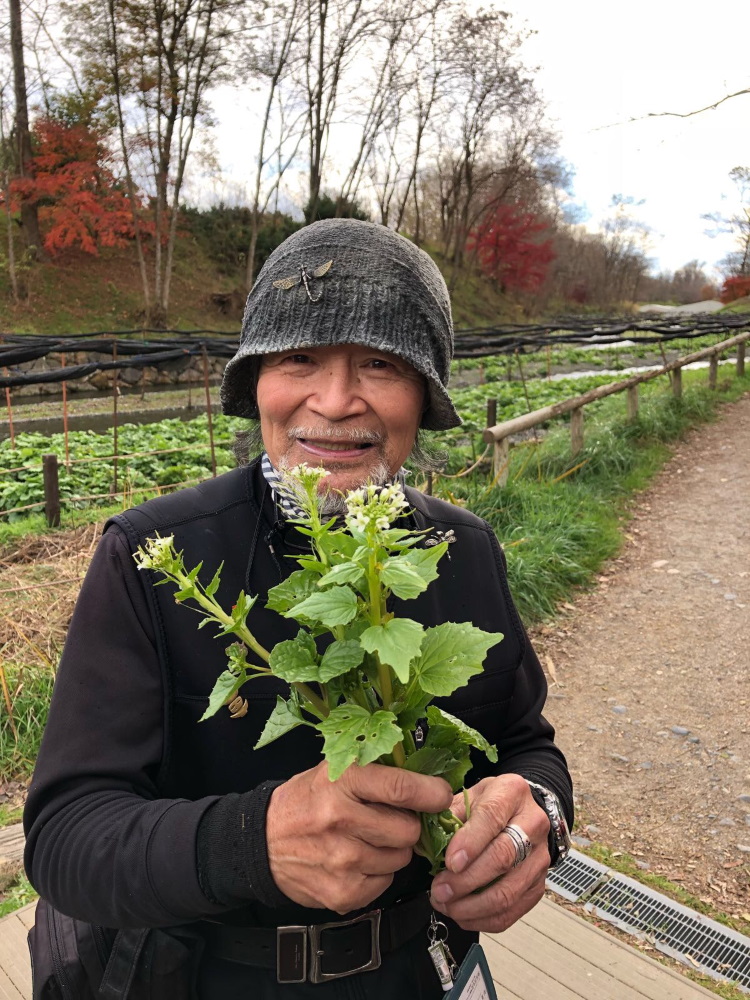 At the Daio Wasabi Farm in Nagano, visitors can learn more about wasbi. The writer’s company is a Japan tour specialist, and offers experiences like this one. 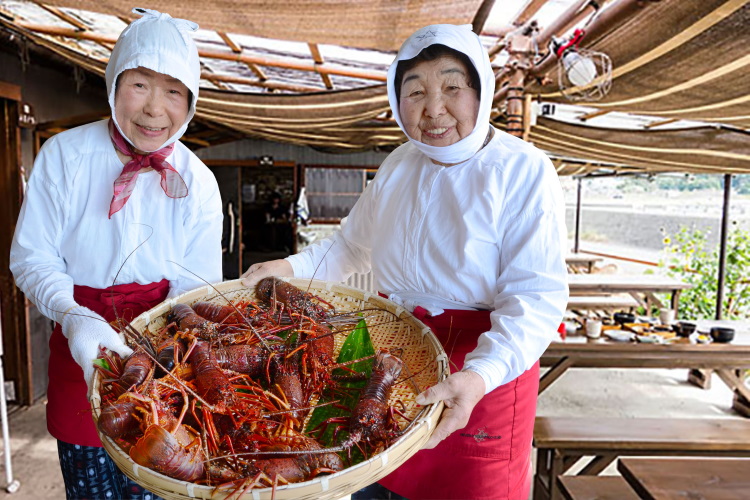 In 1956, there were more than 17,000 women freedivers making a living from the ocean around Japan. Today, the practice has died out entirely in some parts of the country. Ama can still be found in 18 prefectures, but the largest number—around 1,000, or half the national total—work the Pacific waters off the Shima Peninsula in Mie during the fishing season. 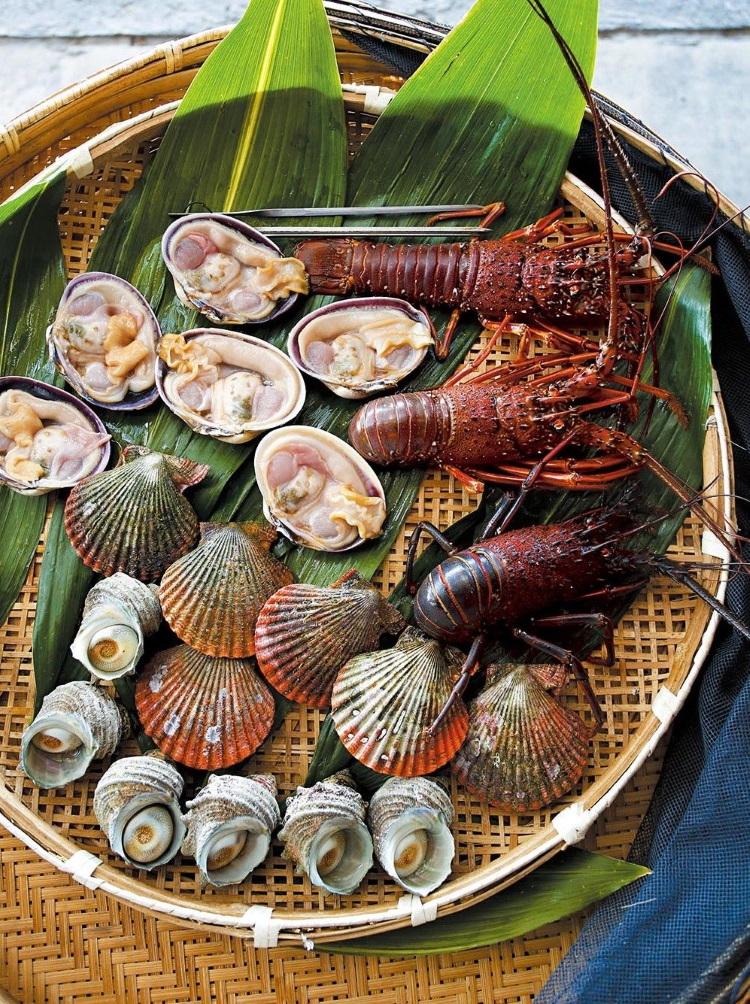 Starting my career
After graduating, I returned to Malaysia and almost immediately started my own business. Initially, my business was geared towards being a “Japan tour specialist”, as I vowed to give my best to everyone.

The increasing interactions with my Japanese partners slowly shaped the company’s corporate culture, and the dedication and accountability that are characteristic of the Japanese people helped improve our Japan tours.

We later succeeded in securing the first ever chartered flights from Kuala Lumpur to Hokkaido, which continued for the next 11 years (this year, of course, things have stopped because of the pandemic).

I introduced and adapted Japanese management practice philosophies to my company. Some of these include improving oneself, versatility, warmth, faith and omotenashi (Japanese idea of hospitality), among others. Reassuringly, these qualities have reinforced the “proud to be Apple-nian” cohesiveness among our staff.

From Kangkar Baru primary school in my hometown Yong Peng (Johor), to Tokyo International University, I had taken on countless part-time jobs throughout my schooling years. And at each stage I remained persistent and dedicated to my work.

As a self-employed man, a business owner, tour guide, tour leader, author, and public figure, my spirit has remained as indomitable as ever. And my story of fighting against obstacles (particularly in this pandemic) will continue.

Have no fear, and never give up! 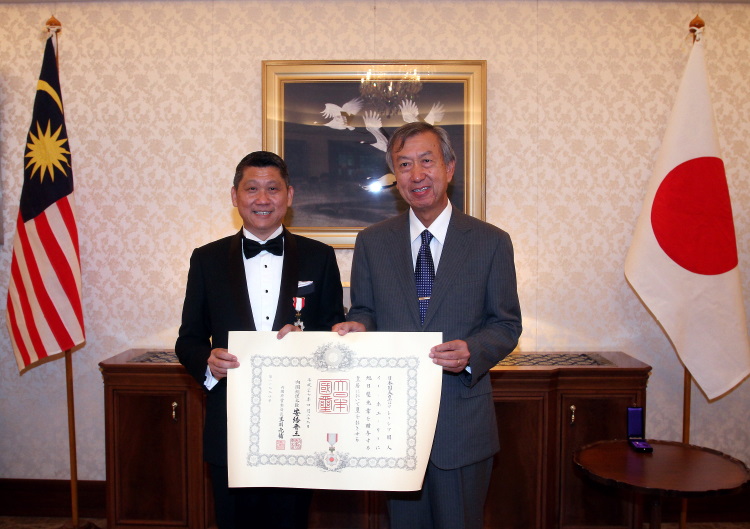 Leesan, seen with Japan’s 2015 ambassador to Malaysia, Dr.Makio Miyagawa, is the first recipient from the Malaysian tourism industry to receive the Imperial Decoration Order of the Rising Sun, Gold and Silver Rays. 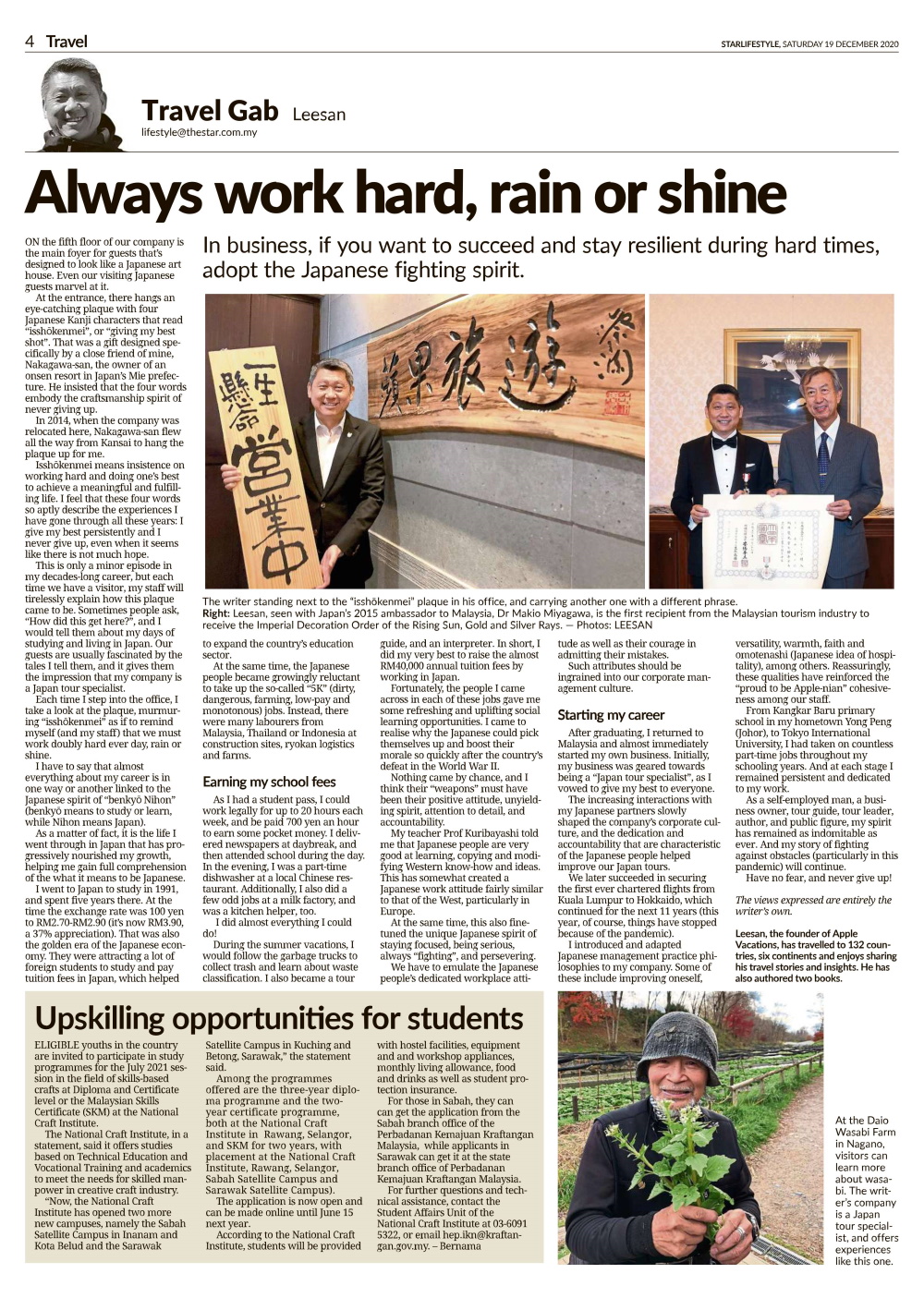